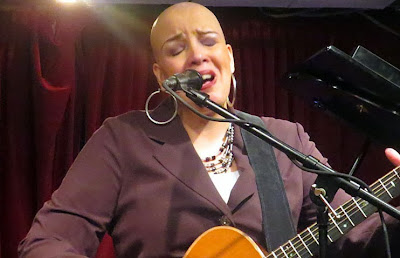 Lili Añel is an artist I've personally known and who's music I've listened to since the 70's. On the third Saturday in October, Lili returned to New York from her home in Philadelphia to promote her new CD, "I CAN SEE BLISS FROM HERE." (Click on the title, if you are interested in hearing the CD.) With a stable of musicians that musically framed Lili Añel's songs in 24 karat gold, Saturday evening's show belonged in large arena - and I'm not talkin' Radio City; I'm talkin' Carnegie Hall. 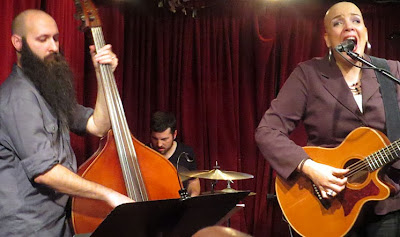 I have seen Lili at least 50 times over the years (please check out my November post from 2009.) So, from by my estimation,  Lili looked pretty much at home in the Cornelia Street Cafe's long and narrow basement room.  I remember the days when The Cornelia Street Cafe was only a small room on the ground floor, and Lili performed a solo acoustic set (without any amplification.) in front of a blank white wall.

Albeit a small room, I was proud to see a long line outside the cafe which eventually packed the room. Some of the audience were friends but others were fans who have followed Lili's music over the years. As I stood in line, I chatted with a man from Montreal who was in town for the weekend and, though unfamiliar with Lili Añel, heard that Cornelia Street Cafe was a place where one could hear great music. 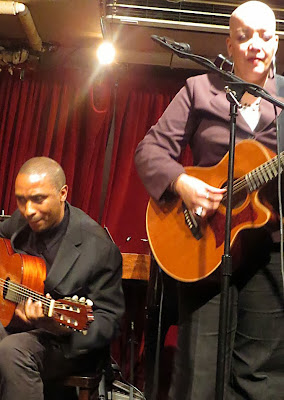 Like many good singer/songwriters, Lili knows how to tell a story which she did by giving the audience some background as to how and why her twin sister Barbara wrote the opening song "The Wrong Time." Lili delivered the song with the Brazilian laid back vocals and the classic guitar strum the song required, as found on her debut recording,"Laughed Last." Though the story behind writing of the song and it's lyrics have two different narratives, they both readily captured the audience preparing them for the brilliant music to come. 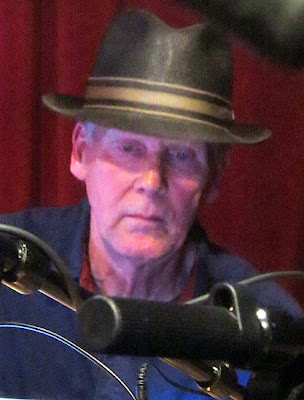 After the first song, Lili and her backing trio of fine musicians eased into the set with a zen like focus.  Lili made us all laugh by saying "There's not a lot of room but if you feel like shaking your stuff you should."  The band made individual entrances into the song song "So Far Away,"  first just stand up bass and vocals, than drums keeping the prominent beat on the snare rim and than the tasteful sounds of the Hammond organ.  The song had some really great moments, two of which came toward the end when Lili sang a verse in Spanish and Dale Melton soloed on organ. 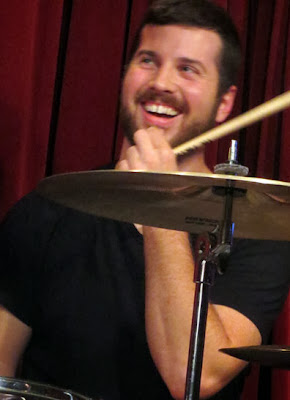 "Climb the Wall" is the opening song and one of the most interesting songs on Lili's new CD, both lyrically and musically.  The lyric contains the new CD's title as one of it's lines, along with music and vocals that strongly reflect Lili's Jazz leanings.  Whenever Lili sang the lines "It's what you see; it's what you do,"  it's as if she were scatting. Oddly enough, I can almost hear a trumpet doing the vocal line.  For me, the song was one of the evenings highlights. 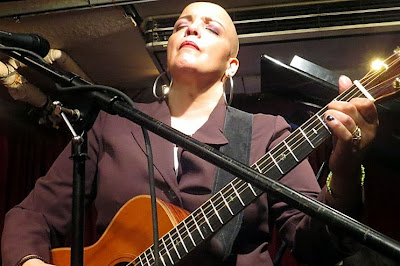 When Lili performed "Something To Do," the spirit in the room lightened up. The lyric is autobiographical in a way that an audience can totally relate to.  Since her and I come from the same era when Stevie Wonder was big, I'm going to mention that the song's sentiment definitely reminds me of "I Wish," from Wonder's "Fulfillingness First Finale."

Before doing "Blindsided" Lili said "....people have heard this song, and they say - Oh, It's a love song - it ain't."  She actually did say "what the heck" and told the audience what the song was about but I'll leave that for her to give away.  All I will say is the guitar part sounds very James Taylor and is much sweeter than what the lyric implies.

"Best Part of Me," which Lili wrote about her son, is one of my favorites on the CD.  In that one song, I hear many of Lili's influences most notably The Beatles. I originally thought I heard Boz Scaggs' "We're All Alone" in the turnaround chorus that leads back to the verse. But since hearing the song for the first time, Lili let on that what I was actually referring to was the bridge  and that the entire song was heavily influenced by The Beatles' "Blackbird." (Which I should have guessed immediately because Lili's always been a hardcore John Lennon fan.) In Lili's introduction she intimated regarding the ups and downs of parenthood while making it very clear that one of her greatest joys, outside of writing songs, was being a mother. 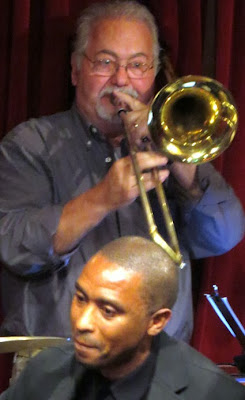 Lili made the audience laugh once again when she mentioned that she often writes songs with both the TV and Radio on in the background.  Someone in the audience even teased and yelled out "was it Spartacus," as Lili was about to mention what was on TV. Lili never revealed what the song "Out of Control," was about but said she learned about it on the Science channel. Without asking, I think the song is about being OCD (Obsessive Compulsive Disorder.)  I believe there is a little to a lot of OCD in most people from the "normal" person to the depressive and bipolar.  So, without knowing what the song was about during the show, it was very easy to relate.  The band took solos on the song, all of which were notable - If I haven't made clear already, Lili's trio was kickass! 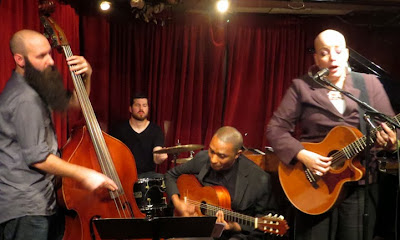 Lili went directly from "Out of Control" into "Got Me Thinking," which is a song that perfectly captures the emotional textures in her voice, taking her from the highest to lowest part of her register.  Along with virtuoso guitarist Marvin Sewell, who quietly sat the front table throughout the first half of the show, Lili  then followed up with a mean blues - "Go Home," which was another highlight in her set.

"Living for Today" with it's samba like feel and the upbeat "Thin Line" put a smile on everyone's face.  I couldn't resist singing along with the latter while I was in the back of the room taking photographs.  I'm sure Barbara Añel was singing along as well - it's hard to resist. As an added bonus, drummer Charlie Patierno's father, Rocco, sat in on trombone. Yup, it was a family affair. 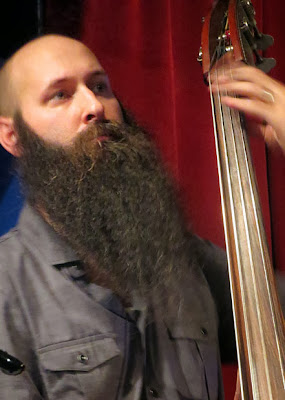 Lili's last song was a brilliant arrangement of Ray LaMontagne's, "This Love Is Over." Lili's version in 6/8 tempo having a retro feel works perfectly as opposed to LaMontagne's Jazzy original 4/4 somewhat Bossa Nova guitar arrangement. For lack of a another example coming to mind, Lili's arrangement took on the power and guts of James Brown's  "This Is Man's World."

The encore,"Lili's Samba," is a song that Lili is working on but didn't yet have a lyric.  (She may have it by now, I'm a lot late with this write-up) During the samba Lili improvised on the melody she plans to put words to and both Marvin Sewell and Ken Pendergrass each took one more tasty solo. 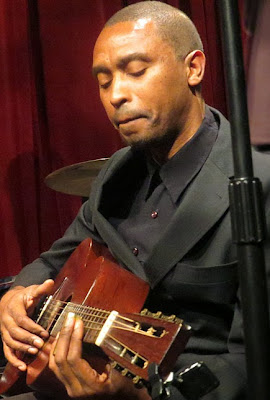 I always scope out a performer's set list whenever I enter any kind of concert venue. I photographed Lili's, which was lying on the table next to where Marvin Sewell had been sitting. Therefore, I was a little disappointed that Lili didn't have time to perform "Today, " which was listed as part of the encore and is the last cut on her new recording. "Today" was written by Jef Lee Johnson, a session guitarist, songwriter and peer who recently passed away. I mentioned The Beatles earlier in this posting; for me Johnson's song and Lili's delivery made me feel like I do when I listen to "In My Life."  Ah well, maybe she'll play it next time.


Lili Añel will be performing again at Cornelia Street on January 25th. If all that I've written doesn't convince my readers to check her out, I haven't done my job. I'm sure her next NYC performance will be amazing show. 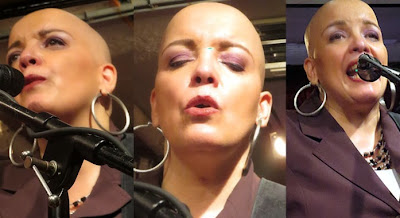 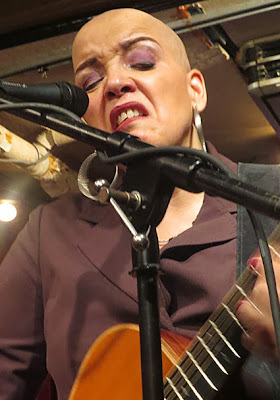 Email ThisBlogThis!Share to TwitterShare to FacebookShare to Pinterest
Labels: All Postings, Lili Aňel