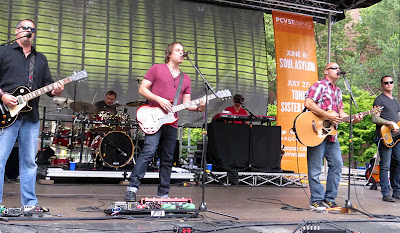 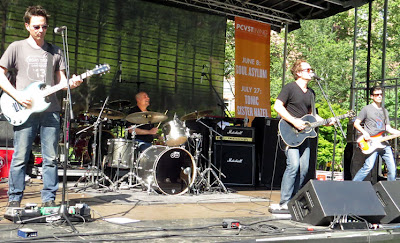 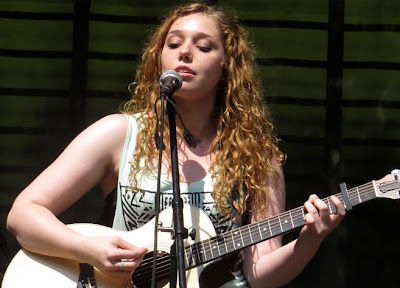 I have made the self observation that when summer rolls around my concert going dwindles. I enjoy doing this blog and checking out bands but it just seems that come summer my get up go often needs a great big push.  This summer my concert going stopped in July and will commence again in September.  The Stuyvesant Town/Peter Cooper Village Housing complex, where I live, had quite a few concerts featuring touring indie bands last summer. But this year they only had two shows, the second of which featured Tonic and Sister Hazel. 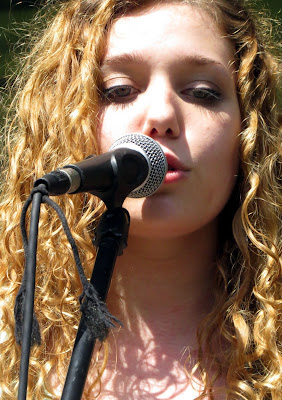 Though, the Ohio born,Valerie Reaper wasn't mentioned in any of the publicity for the Stuy Town Oval, she was a pleasant surprise on a sunny July afternoon. The man who usually does the introductions for the Stuy Town shows (Dick Clark he's not) said "welcome some local talent, she works in the (mumbled word) office; she has a Stuy connection. Miss..." Once I heard how talented Reaper was, my thought about the introduction was that I didn't need to know how she got the gig. Sometimes it's the little things that happen on stage having nothing to do with the artist that bug me.


Reaper's first song was filled with consecutive choruses with each one appropriately ending with the hook "Can't keep a good girl down." Reapers soprano vocals with fluttering vibrato had a slight musical theater feel to them especially when she performed her upbeat ballad "Cab Ride."  The most interesting of Reaper's four songs was "Brooklyn," filled with her rhythmic strumming, her soulful melismas and again her fluttering vibrato.


The only time Reaper spoke to the audience in her 18 minute set was before the last song. As a setup to a song about her home state, Reaper made it clear she won't be residing there anytime soon.  It was my favorite song of the set stating how she loves this city "cause the boys are all so pretty"...and she's never going back to Ohio. The song felt very "Spring Awakening" to me but perhaps that's what I liked about it. As I already stated, Reaper's set was short but if you were there, it was extremely memorable. 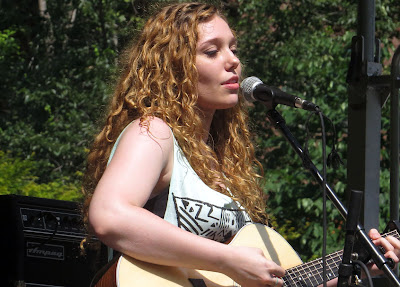 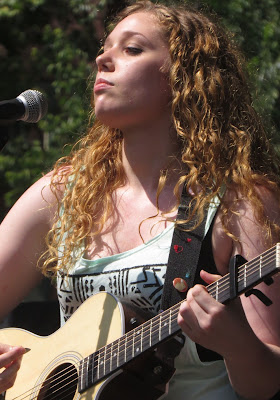 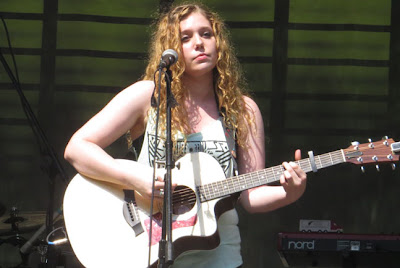 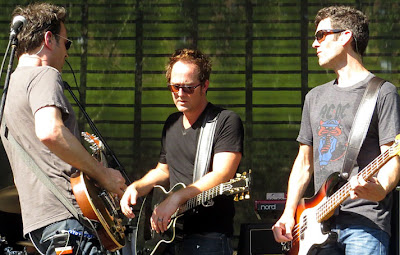 
Tonic is band that became well know in the mid 90's for their singles "Open Up Your Eyes" and "If You Could Only See," both of which they performed as virtual bookends for their set. Known more as a guitar band leaning ever so slightly toward grunge, the band is basically a guitar trio with alternating drummers which they tour with.  However, I will state the often smiling drummer, Peter Maloney seemed more like a staple then just a drummer sitting in.


Emerson Hart started out the set by referring to the sunbathers over the bands prerecorded intro music,  "it's bikini Saturday, I didn't wear a bikini - nobody told me...we'll try not to be too loud."  Tonic was louder than other bands that have played the Stuy Town Oval, but just a little.  I thought their sound was really good; there ain't nothing wrong with loud as long as there is clarity between instruments and vocals.

Tonic went straight through their first 3 songs, starting the 3rd song "Roses" with a powerful drum beat and a chugging guitar. Though Hart and Jeff Russo are both billed as singing lead vocals, Hart, who stood dead center, seemed to be doing most of the singing.  Hart turned to Russo after "Roses" and said "this is your home town - Jeff - you grew up on the upper east side and....where from Jersey." Russo then said "you don't mind if we keep playing Rock-n-Roll cause some people get freaked out by it."  It was a weird thing to say and I  thought "Dude - you need to work on your patter."


I considered "Sugar" as my favorite song in Tonic's set, probably because it broke down to a single guitar at points and perhaps because it felt a little more pop than Tonic's other songs. For the most part, I thought Tonic performed a really good set of 90's sounding Rock music but there wasn't really any song that stuck out. Most of Tonic's material had a sameness to it. I feel the guys are great musicians but their songs use the same musical pallet which for me got a little tiresome 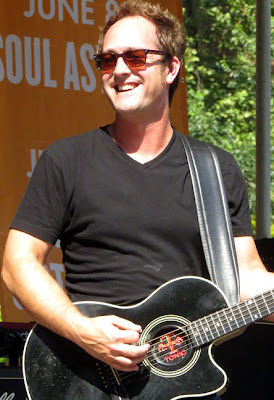 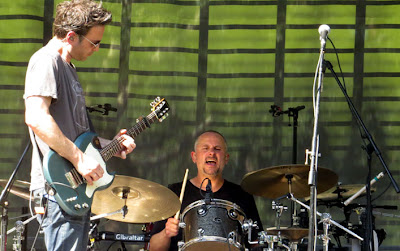 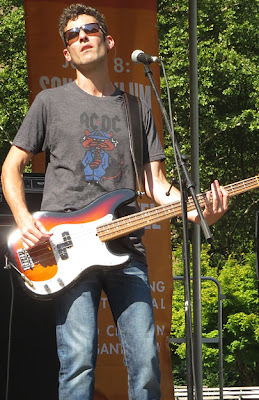 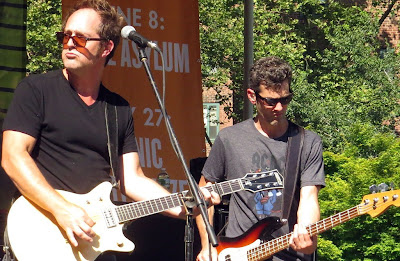 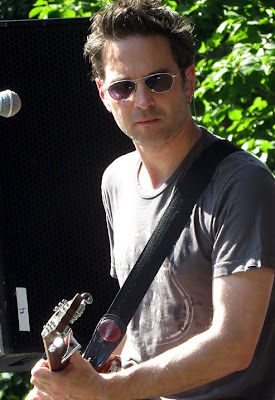 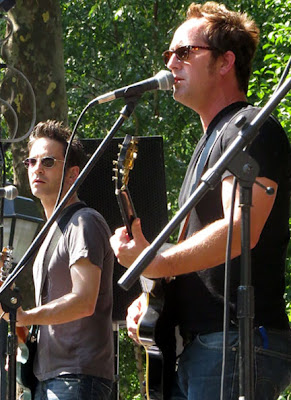 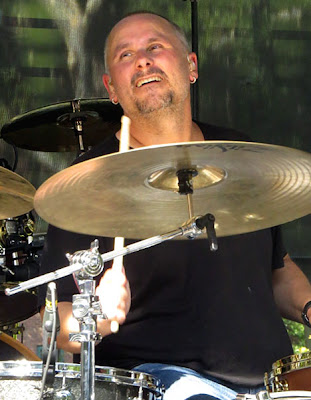 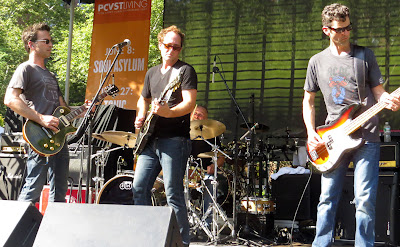 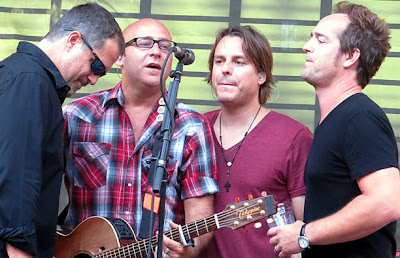 Sister Hazel is another band that started out in the 90's, with their leanings that are more classic and southern rock as opposed to Tonic.  Also unlike Tonic, Sister Hazel freatured a lot of vocal harmonies between all it members. Sister Hazel had their first major hit in 1997 with the song "All for You,"  and continued to have additional hits up to the early aughts such as "Champagne High" and "Change Your Mind."


"Let's do this thing - alright!"-was what Ken Block said before going into band's opening song "Shame." The audience, who mostly came to see Sister Hazel, clapped along with drummer Mark Trojanowski's kick drum, until Block's vocal entered the song above the heavy guitar riff. Block mentioned directly after the song that band was from a little town called Gainsville, Florida and that the band's name was Sister Hazel but we already knew that.


As Ryan Newell changed from his electric guitar to banjo, Block sarcastically introduced "Roll On By"  by stating "this one's called please don't go pee or get a beer just because it's a new song - song."  I was glad I didn't feel the need to do either of those things because it was a great song featuring some sweet vocal harmonies and a piano solo by the band's touring keyboardist Dave Lagrande.


Block mentioned that the band had many songs on several movie soundtracks such as "Bedazzeled"("Change Your Mind") and "The Wedding Planner." ("We'll Find It"") before introducing their song "Your Winter" which was on the soundtrack for "10 Things I Hate About You."  Sister Hazel tagged out the song with The Beatles "Hey Jude" which I really enjoyed if for nothing more than it was unexpected.  They basically did one verse and went directly into the "Nah, nah, nah - hey Jude" part with Newell eventually playing lead bringing them to the end of the song.

I like that Sister Hazel followed up their previous ballad with "One Love" and the somewhat funky "Starfish."  Both songs seemed to bring their set to a place where it reflected the beautiful day out in sun on the Oval lawn. When the band did "Happy," Block asked the audience to clap along and did some patter that wasn't quite rap - it sounded more like an auctioneer calling bids. My favorite Sister Hazel's set was "Swan Dive," I can't tell you why except I automatically wanted to sing along without even knowing the words.

I think the idea of their new song called "Karoke Song" sounds really hokey but though not my favorite song, I did enjoy it.   After the song, Block introduced the bass player standing in for Jett Beres as Micheal Jackson, which I sincerely doubt was his name. I later wrote to ask what the guy's name was and I was told they preferred it not be published. They didn't give it to me; so I will just leave it at that.


For "This Kind of Love" Andrew Copeland sang and played piano by trading places with Dave Lagrande who in turn played sax on what was a very smooth ballad.  As I hinted at earlier, the band ended with their greatest hits which included a song they recorded with Shawn Mullins titled "Mandolin Moon," and then an encore, with only the four band members, standing around one mic. 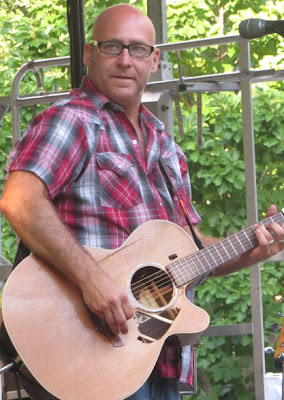 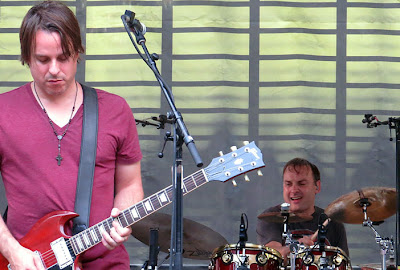 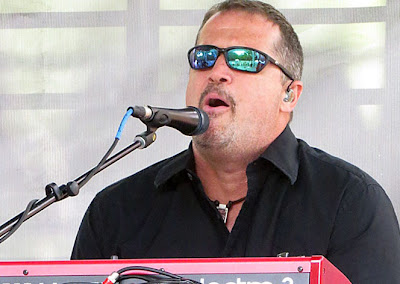 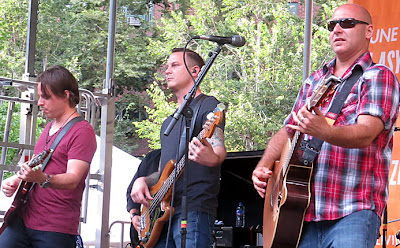 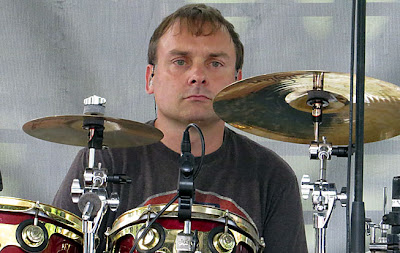 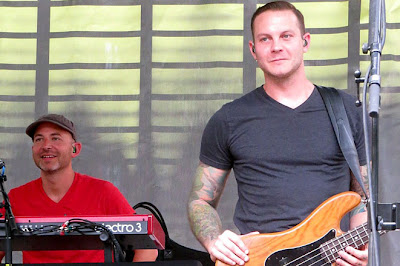 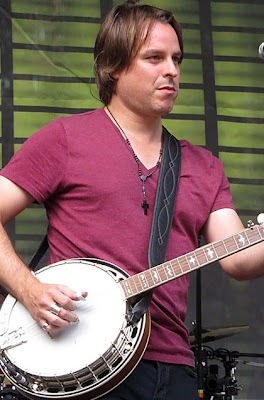 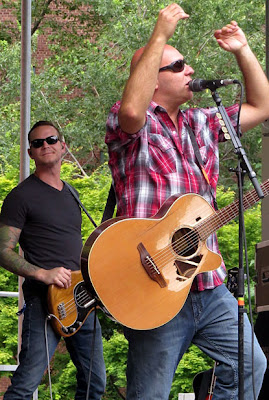 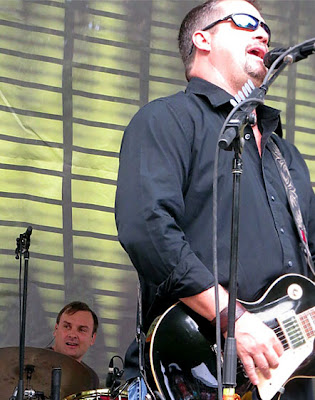 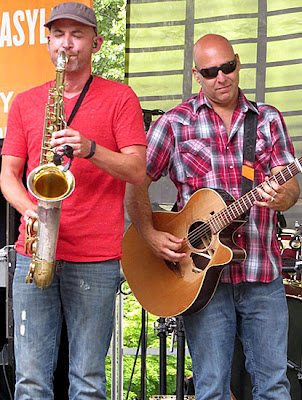 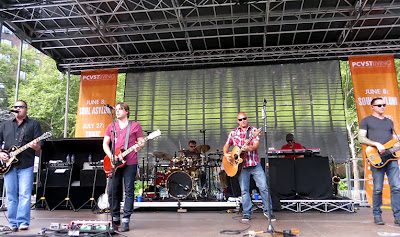