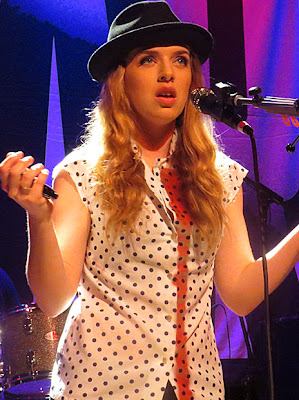 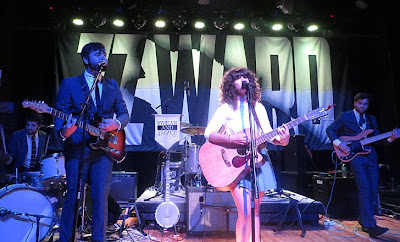 Friday night was my first time at the Warsaw in Brooklyn. Loved the venue but wasn't crazy about the sound. But despite the annoyingly fuzzy sound both ZZ Ward, as well as, Swear And Shake gave musically wonderful performances. 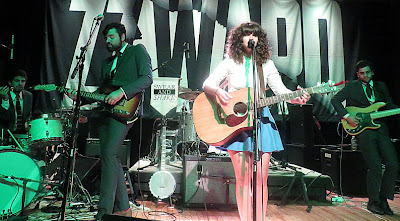 Home-based in Brooklyn, Swear and Shake, is a folk indie band.  By the way the band was dressed, my first impression was Shirley of "Laverne & Shirley" meets Buddy Holly's Crickets.  But that was just my first impression - furthermore, a band that looks different is a good thing, it makes the audience pay attention by wondering what the band is about.

Swear and Shake's set started with banjo playing guitarist and singer, Adam McHeffey asking the audience "How you doin' Brooklyn?"  The opening song "Hum Our Tune" had a sweet melody sung by Kari Spieler with a counter melody sung by McHeffey.   Unfortunately, I felt that Swear &; Shakes vocals were not able to cut through the fuzzy sound caused by the room, in the way that ZZ Ward's vocals did later in the evening.

What Swear and Shake lacked in sound quality was compensated for with the spirit and vitality of their performance.  With the next song "Promise,"  the band stomped and clapped their hands over their heads during the stops and starts, prompting the audience to clap along. As they did in a YOUTUBE video from 8 months ago, when Spieler and McHeffey were performing as just a duo, the band went directly into the sweet folk ballad "Johnnie."

One of my favorite songs in Swear and Shakes set was "Marbles."  With Mcheffy on banjo against Ben Goldstein's soft shuffling drums, the song had a bit of ragtime feel that occasionally went a little bit indie.  I also found the fairly new song "Be Your Strenght" interesting in that it seemed somewhere between a spiritual and a hook driven love ballad.


The thing I have to give Swear and Shake kudos for keeping their set interesting.  In the middle of their set, Swear and Shake did a Marvin Gaye cover which immediately captured the audience when we heard Shaun Savage's funky bass.  I started this post by stating the quartet was a folk indie band but that doesn't really describe or include their soulful edge or their overall sound,  which currently seems to evolving into something much better. 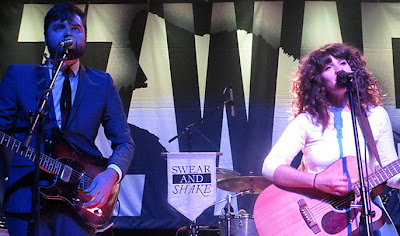 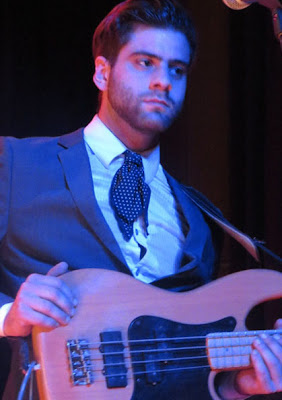 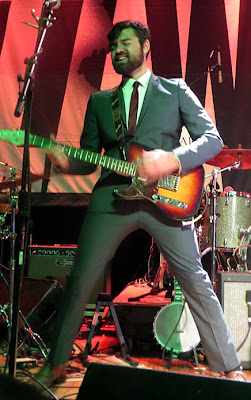 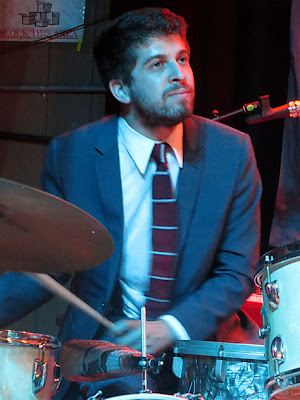 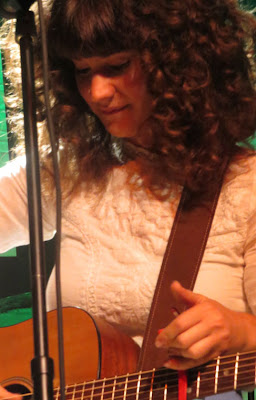 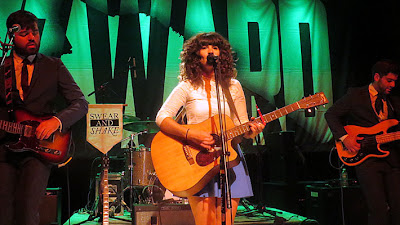 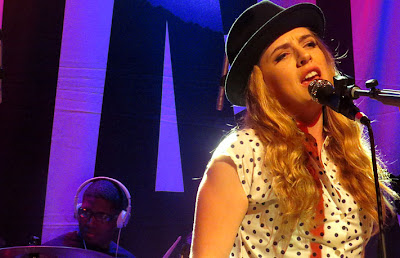 
Occasionally, Daddy's a good boy and actually looks at the emails various publicists send me. Such was the case, with ZZ Ward. Not only did I read the email, I actually watched the enclosed video. I don't know what overcame me, but I'm glad I did.  The video immediately made me want to hear her debut CD "Til The Casket Drops."  Prior to the Album CD, there was a "365 Days" EP released in May of 2012 but as is apparent, Daddy was late to the party.


Now in her early 30's, ZZ Ward, otherwise known as, Zsuzsanna Eva Ward was born in Pennsylvania and grew up in Oregon before making Los Angeles home base. On her facebook page, Ward states "I grew up listening to my Dad write and sing the blues and started performing with him in his blues bands... I fell in love with the sincerity of Etta, the soul of Muddy and the power of Big Mama. When I got older I started writing hooks for and performing with local rappers from Eugene. I fell in love with hip-hop, with it's authenticity."


ZZ Ward opened with the same song she performed on Jimmy Kimmel two weeks after I saw her. The thing that struck me when I saw her on Kimmel was that in concert Erick Walls' piano part was barely audible if audible at all. (I remember seeing him play, but hear- not so much.)  "Put the Gun Don't" was the second song I watched Ward perform on online, the first was a cover of the Frank Ocean song "Thinkin' bout You.".  Though very different artists, Ward's phrasing and tonality reminded of Fiona Apple.  It struck me as having that same outspoken (talkin-outcha-neck) quality.


With her acoustic guitar in hand and a top hat on her head, Ward performed the terminally poppy but very cool "Til the Casket Drops," at which point two young woman almost threw Daddy over, so they could stand in front of the stage and sing along. I was hoping a cat fight was not going to ensue when one of the other young woman they stepped in front of yelled "OH REALLY!"  Luckily, maturity prevailed and I have less to write about.


Ward took a little time out to talk thank the audience for coming out, before going into "Home."  During the song I got the feeling that her acoustic guitar was canned and she was playing along with it.  I also felt the same held true for Chris Patt on drums during the parts of the song where the rim shot was prominent.  The rim shot sound was too even and guitar rhythm too in the pocket to not make me suspicious.  The important thing is that Wards vocals were live and on the money.


Though the Ward's set was diverse as well as entertaining. I knew I was watching a well oiled machine and that she was not going to throw in any surprises.  Ward did the exact same set she did in Pennsylvania and the same exact set as in South Carolina minus one song. There's nothing wrong with playing it safe but I truly believe that she is a talented enough artist to take a few more risks.  I really enjoyed seeing Ward perform her songs live, I just wanted to go home remembering one song she did that made that particular evening special. 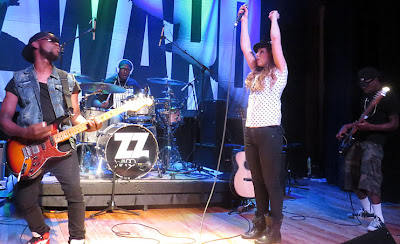 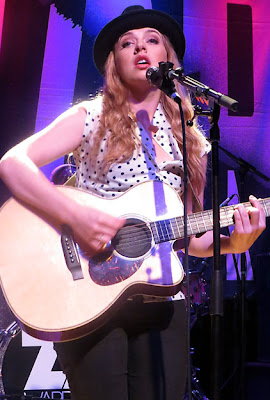 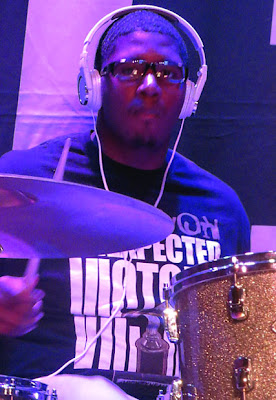 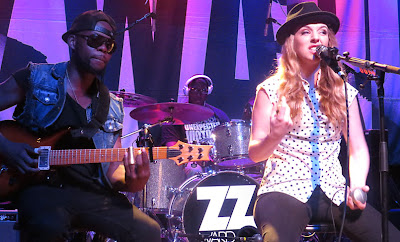 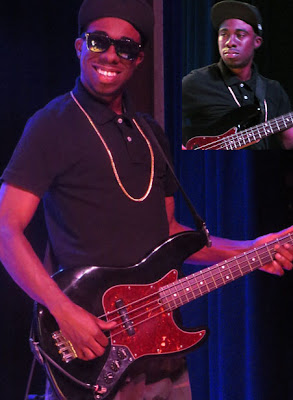 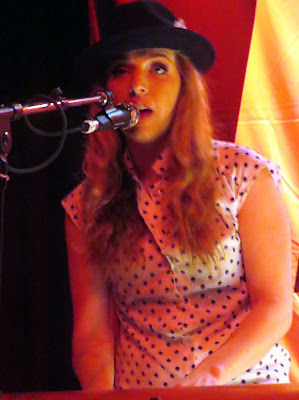 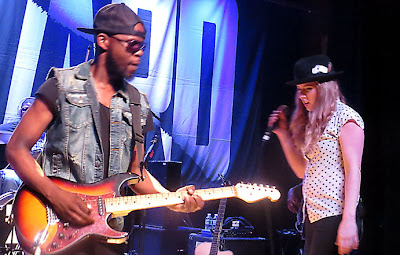 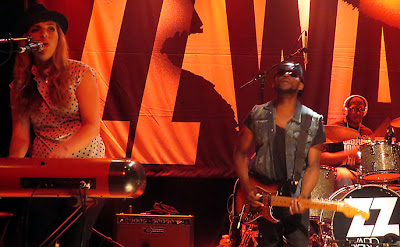 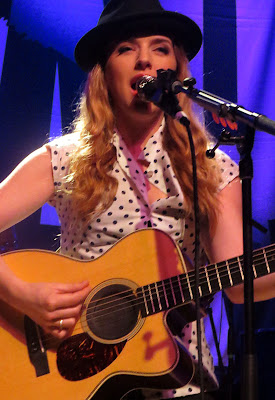 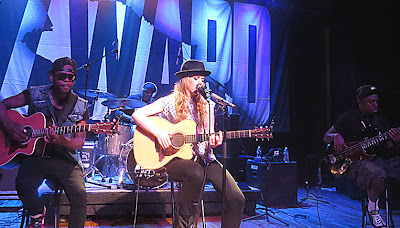 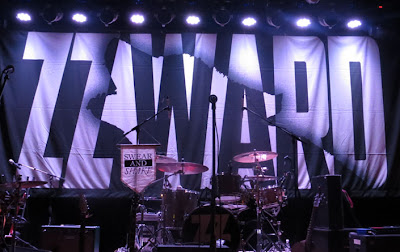 Email ThisBlogThis!Share to TwitterShare to FacebookShare to Pinterest
Labels: All Postings, ZZ Ward / Swear And Shake