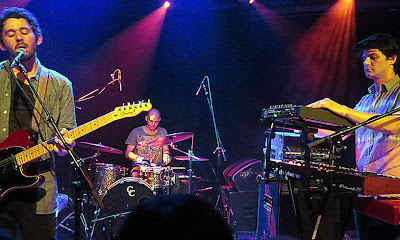 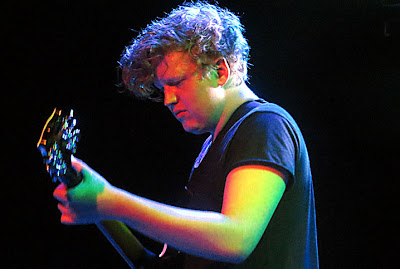 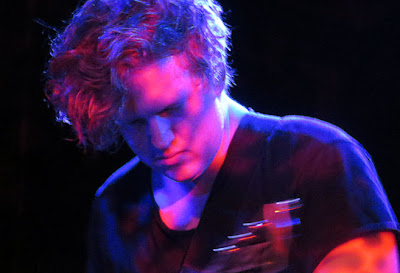 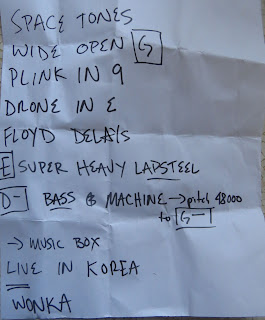 I would describe Dave Harrington's music as experimental and atmospheric.  Before starting this posting I tried to find out a little more about him. However, all I found out was that he did work with musician, Nicholas Jarr and the two worked on a project and tour supporting a collaborative EP titled "Darkside."

Harrington's set for me was a wonderful mind numbing hour of ambient sounds created on guitar, bass, and a string instrument that sat on a table looking similar to a pedal steel guitar. As Harrington's set list indicates there were several pieces of music that he played, but they more or less continuously floated into each other for the first 40 minutes that he played.

Harrington's music made me feel more like closing my eyes and experiencing rather watching.  There were points when his music swelled and then points when his music simmered over the people chattering through his set which made it feel as if I were watching slide show or a homespun film at a museum.  Harrington spent most of his set hunched over his instruments like a mad scientist in his studio.  The only time his stance changed was when he finally stopped to thank The Antlers for having him open and to introduce his last song.


The last song Harrington announced as - one (song,) a real one not a very long one..of my favorite songs it's called "Pure Imagination."  but it doesn't seem to be on his list.  Not surprisingly the song was a my favorite ending a set of really luxurious ambient music. 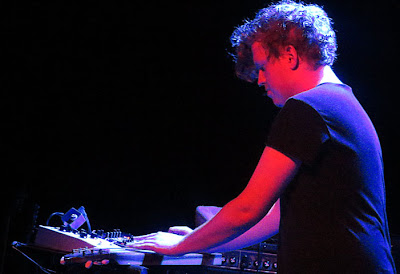 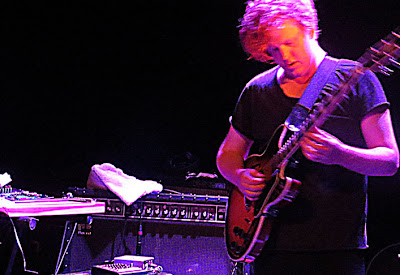 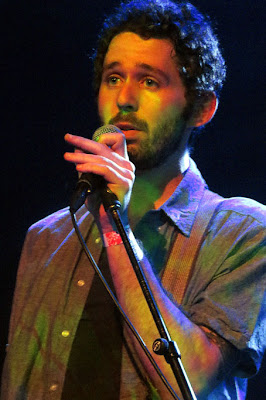 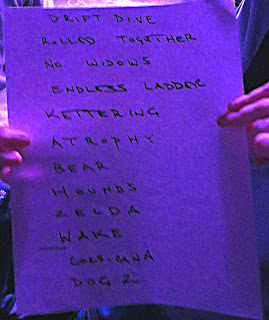 The first time I saw The Antlers  they opened for Editors at Terminal 5 in February of 2010. That night I was really impressed with the band's overall sound but wasn't sure what to make of drummer Michael Lerner seeming little annoyed. The second time I saw The Antlers was opening for The National at Radio City.  The boys made an event of being at Radio City by adding two musicians on horns and the likes of Sharon Van Etten on background vocals. Though they only did 6 songs, I once again was extremely impressed.


June 12th was my 3rd time seeing The Antlers, and my favorite.  Why? The band was on what felt like home turf and came off as being completely relaxed. I'm sure the fact that the band has been heavily touring ties into how I experienced them as well.  It was enjoyable seeing them in a small club. I also enjoyed seeing them as headliners and hearing an artist who complimented their sound like Dave Harrington, open up for them.


The Antlers eased into their hour and half set without fanfare and with the song "Drift Dive" from their most current EP "Undersea." They immediately went into "Rolled Together," which made the show's beginning feel like we were gearing up with slow exotically reverberating crawl. Le Poisson Rouge seemed sparsely filled when I arrived but seemed packed when I turned around during The Antlers second song. (I turned around because I was nosy - wanting to see who Darby Cicci kept waving to.)


Peter Silberman announced the band was taking a little time to catch their breath before easing into the "No Widows."  I don't know if that was because he needed to prepare to sing in his hallmark falsetto voice or to paraphrase Mae West, he was "excited to see us." Beginning  with ethereal sounding keyboards and spacey guitar "Endless Ladder" also from "Undersea" was one of my favorite songs in their set.


A fluttering sound from Cicci's keyboards seemed to go on for a very long time before Silberman started singing during the song "Kettering." I'm very familiar with song's very identifiable vocal melody but don't recall the fluttering/quivering keyboard being as prominent in the arrangement as it was that night - regardless, I really enjoyed Silberman's vocals against that sound.

Another favorite in the set was "Bear;" from the initial cheers I could tell it was an audiences favorite as well. What I was enjoying was Siblerman's beginning vocals seemed as if he were telling a bedtime story. As the audience sang along, the guy was quite animated in his delivery.


Before doing the song, "Zelda," Cicci said "my friend Zelda had a hard week, she's not here but this is for her." Then at a later point, before the encore Silberman gave a special shout out to Le Poisson Rouge. He spoke about working for the club in 2009 while in the mist of making arrangements for The Antlers to go on the road with their first recording "Hospice." Silberman also mentioned, during the body of the show, that the band was working on a new recording, but he couldn't say when they would be finished. I don't have anything more to say about show other than it was really sweet to see the band happily playing music on home turf. 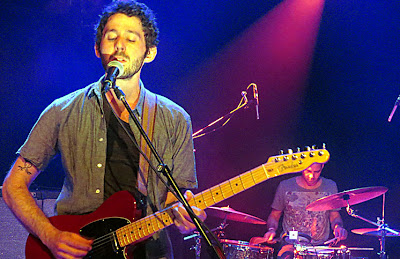 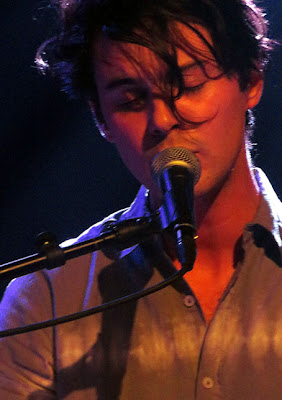 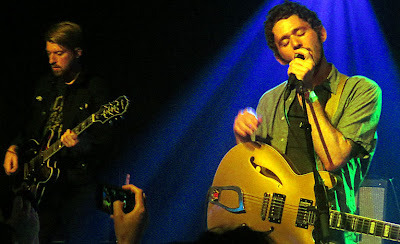 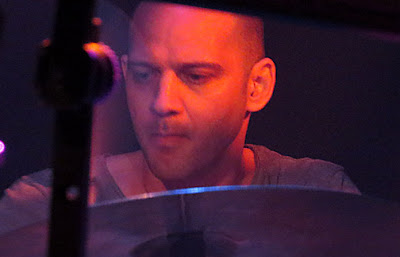 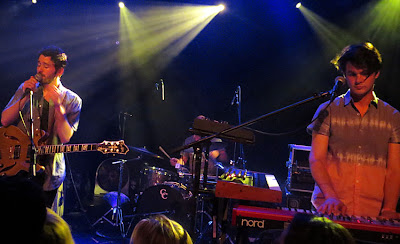 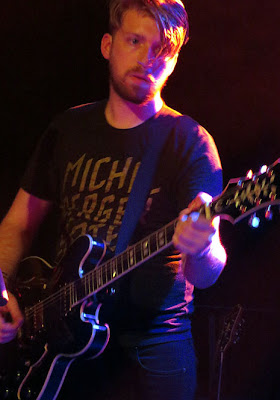 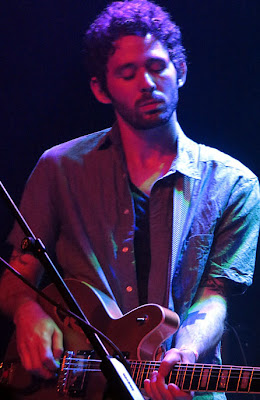 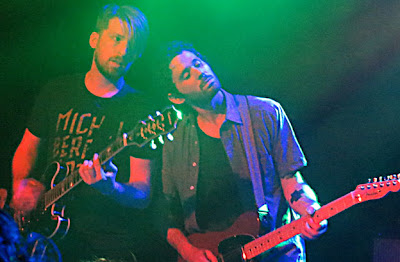 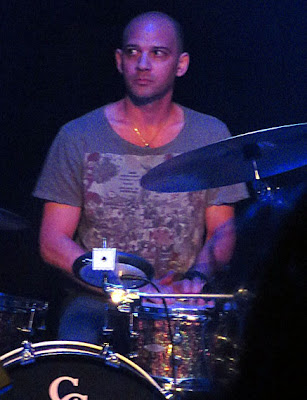 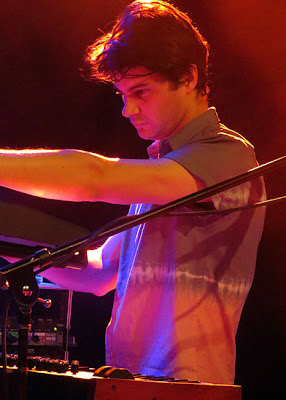 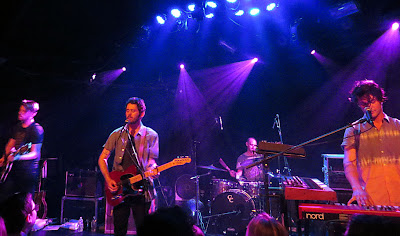 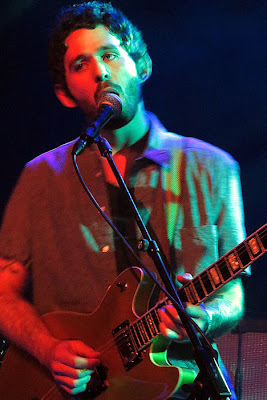 Email ThisBlogThis!Share to TwitterShare to FacebookShare to Pinterest
Labels: All Postings, The Antlers / Dave Harrington