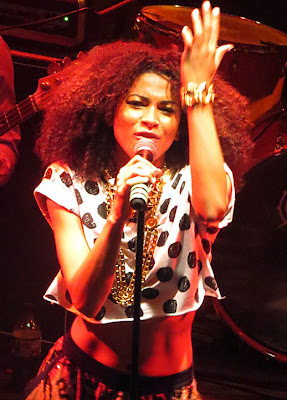 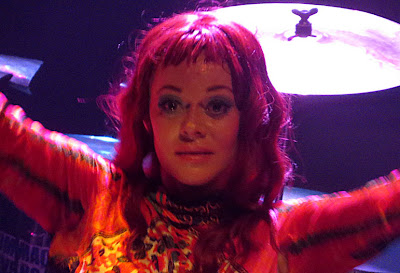 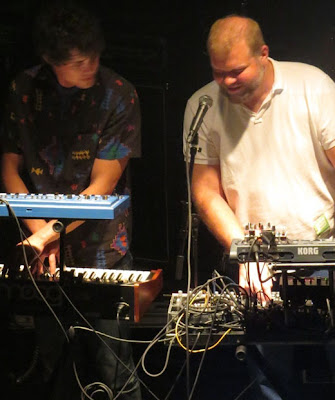 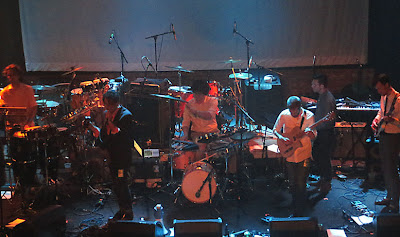 Friday was a fun night of never ending dance music that I believe continued long after the show ended and I left the venue. There was a lot to write about and there was all too much to photograph. Leverage Models hit the stage around 9:30 and the phenomenally fabulous Escort didn't end their set until almost 2 AM.  On the whole, most of the darkly lit show was difficult to shoot from the balcony but my photos should give an idea of what the evening was like. 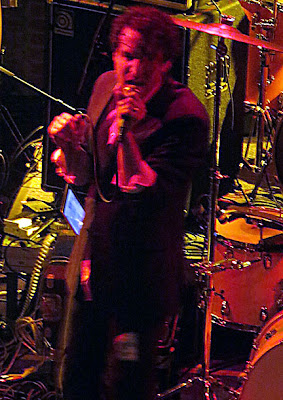 According to Brooklyn Vegan, Leverage Models is a collective led by producer and multi-instrumentalist Shannon Fields.  Brooklyn Vegan has said that the band recalls the arty new-wave sound of Talking Heads and early Duran Duran.  But if I am going to make comparisons, their recordings remind me of Scritti Politti meets David Bowie meets Suede.

As Leverage Models short set progressed from beginning to end, I kind of wanted to scream out toward the stage "Dude-slow down!"   Fields didn't stay still for a millisecond, which made him seem more manic than into the music.  Rhythmically, Leverage Models had a lot going on between Barami Waspe's sax riffing, 2 percussionists and the rest of band trying to compensate, for the bad sound in the room, making it hard for me to focus.  I don't think Leverage Models have been around too long - so I think it's kindest to say that they will probably need a few more outings for their sound to gel. 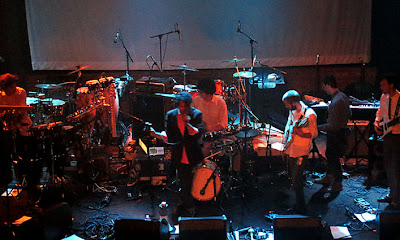 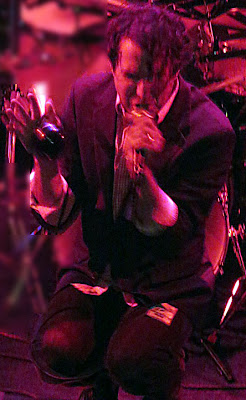 Tippy Toes is production collaboration between Morgan Wiley from Midnight Magic and engineer Abe Seiferth.  The duo's facebook bio states that they make electronic and House music with analog gear, emphasis on the House. Their facebook page also states Friday night's show was the first time they used the video background which ties into one of my major complaints for many bands I've seen while doing Concert-log.  The video for most of their performance, may have been cool, but left them in the dark.  Production duo already implies two musicians bent over their equipment - no light doesn't help.

As for Tippy Toes' music I automatically liked them starting with the first beat of what seem like straight out of a 90's box of House blend music.  As it says below, most of the songs in their set list were working titles. I personally got the feeling that I wasn't getting actual songs as much as I was getting a continuous stream of musical consciousness, which was fine with me.  Because whether dancing and just staring at the mirrored ball on ceiling - I felt sedate and meditative, and that everything in the world was good.

*per a response I received through the duo's facebook page - the above are considered working titles. 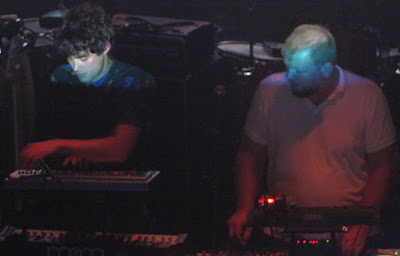 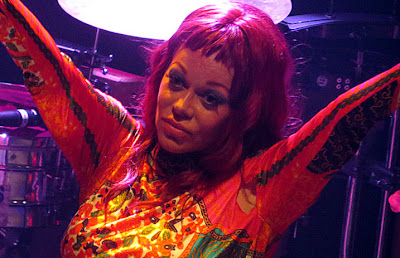 JKRIV deejayed prior to LM Kier taking over the turntables.  Unfortunately, that part of the stage was not lit until Kier appeared, so I didn't take any photos worth posting.  Though I enjoyed what he played, JKRIV didn't play anything  that I was familiar with.  From what I remember, it seemed like early house music.

Like most people I know Lady Miss Kier from the 90's group Deelite.  I didn't know what to expect regarding a DJ set, but LM Kier ended up being my favorite part of the show by playing some disco hits I hadn't even thought about since the 70's.  Two of those 70's disco hits which Kier hit the crowd with was the breakdown part from "Sun Sun Sun" by Jakki or a part of the song "Dancin'" by Crown Heights Affair.

Kier started her set with the Talking Heads' song "I Zimbra"  before a man playing guitar in pimped out suit (including hat and doo-rag) came out to stand next to her.  After a while another guy jumped on stage wearing a tuxedo to dance with her.  Some of the fun songs Kier played were hits like Shalamar's "Take That To The Bank,"  Candi Staton's  "Victim,"  and  Kid Creole's "Maladie d'Amour." 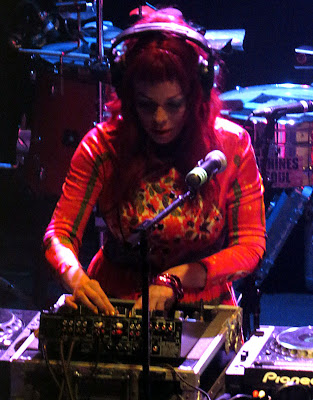 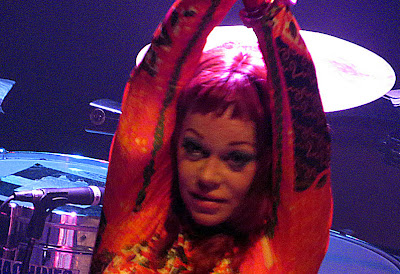 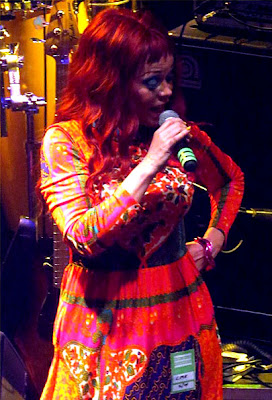 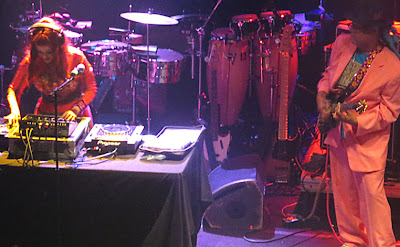 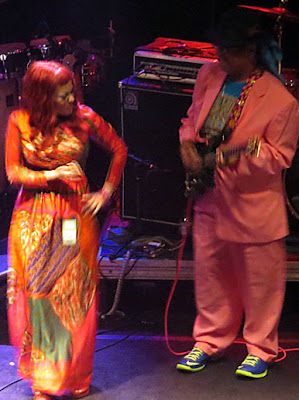 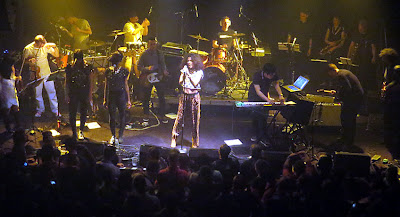 As I recall,  Escort got on stage around 12:30, despite the sign in the box office window that showed them scheduled to perform and hour earlier.  I don't really think the crowd minded their late arrival;  dance clubs generally start around that time of evening.  Against what felt like a crowd rousing pump of a kick drum and some jangling guitar, lead vocalist Adeline Michèle made her grand entrance looking extremely foxy.  The woman is beautiful- I'm talking Beyonce caliber.


The first song ended abruptly, giving Michèle enough time to ask the crowd, in three different ways, if they came to party before doing "Get On Up."  I loved that second song - the thumping pedal bassline and the horns on the break took me back to my disco days. Escort went directly into "Love In Indigo" once they ended the previous song which is the perfect song to dance the Hustle.  (Prior to show starting there was a guy on main floor doing some Bus Stop and Hustle steps)


"There But For The Grace of God" was another added treat to some of the music in Lady Miss Kier's set. Daddy (moi) was reminiscing big time.  I even took a picture of the mirrored ball in the middle of the room.  In terms of Escort's set list, I found each song complimented the next which was certainly the case with "...God" being followed by "Why Oh Why," and "Makeover."

By the middle of the show I was really impressed by Michèle's voice.  I'm stating that because I was surprised. After hearing Michèle live, I feel like her powerful vocals haven't really been captured on Escort's recordings thus far.  Michèle is one of the core members of Escort along with Dan Balis and Eugene Cho, who was beside her front and center on keyboard.   I love the fact that Escort is a band in true 70's tradition.   Looping pedals and laptops are cool but ain't nothing like a big ass band.  I counted 15 people on stage, I think there should have been 16 but one of the listed background vocalists was missing. (I think it was Joy Dragland.)

After Michèle asked crowd if they were sweating yet and if there were any big haired girls in the house, Escort went directly into "Hollywood," one of my favorite original songs of their set.  Escort did quite a few covers but I loved the fact that they covered the Billy Holiday song  "A Sailboat In The Moonlight, " it goes with the very disco and very 70's tradition of covering blues and jazz standards.

After Escort's set ended with "Cameleon Chameleon,"  Cho came back out and asked the crowd if they liked all the performers in the evenings lineup and ended by yelling out to the crowd "do you want fucking more!!"  Escort came out and did a song I know as "Push, push, in the Bush,"  but did it without singing the songs title lyric which was kind of cool.  It felt like a teaser before getting to the disco meat and potatoes of  "Dancer."  Needless to say Daddy went home happy and really glad people are still playing Disco music after all these years. 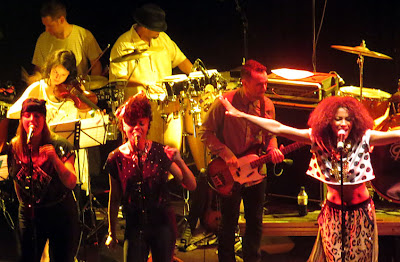 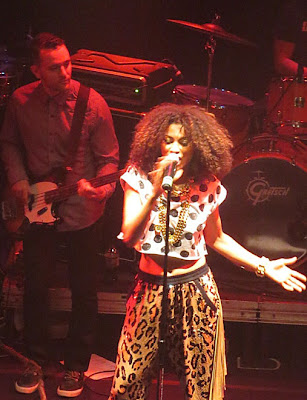 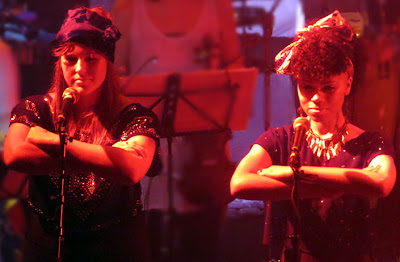 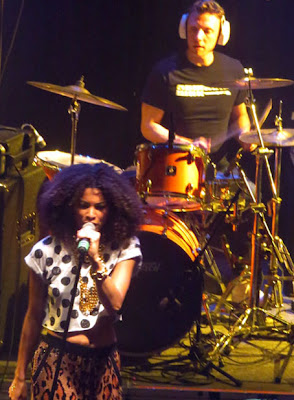 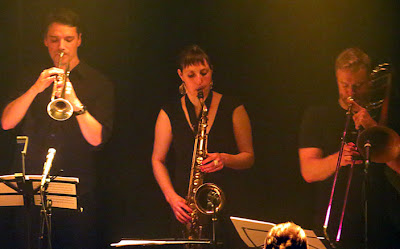 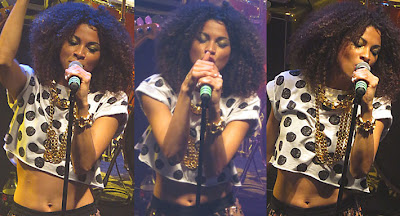 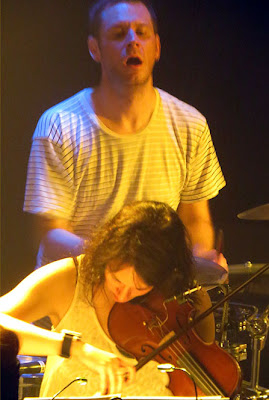 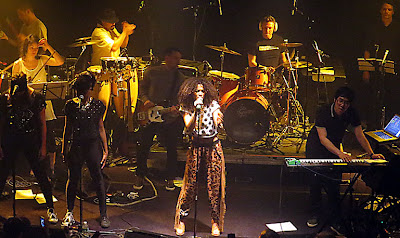 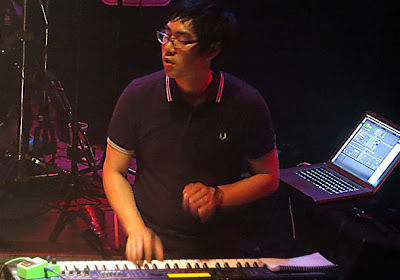