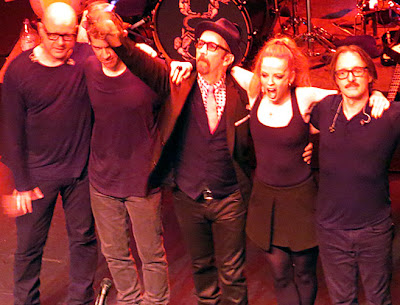 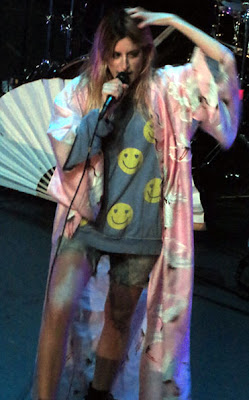 When I heard Garbage were circling back to New York for the second part of their tour, I wasn't going to wait.  Rather than get in touch with their publicist a week before the concert to see if I could get comped, I made sure I bought a ticket.  The show was well worth it. 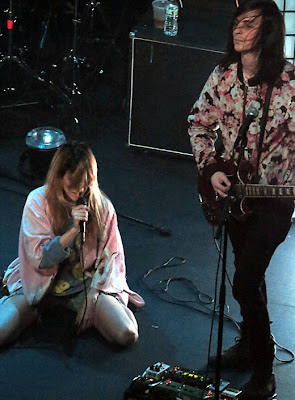 I think it's safe to assume that like many people in the audience on Friday, I did not know IO Echo's music. But from what little I heard from IO Echo, I was planning on not liking them. But despite myself I actually enjoyed their set.  I found there was a playfulness, especially in Ioanna Gika's performance.  I mean after all she was wearing a pink open Japanese gown with a smiley faces tee shirt underneath.  She looked more like she was wearing a bathrobe over her night clothes rather than a kimono.

Guitarist, Leopold Ross is known for his work in and with numerous bands but also as a producer. One of his many claims to fame is as a co-writer of the score for the film "Book of Eli" in 2010.  Since there were two guitarists on stage both basically playing lead at different points, I wasn't sure which guitarist was Ross,  but I am confident it was the guy in the flowered shirt matching Gika's Kimono.

I was captured by IO Echo within the first two songs by recurring musical themes that ran through their songs. In the first song Gika sang as if she were making a call to the wild and in the second it felt more like she was singing a nursery rhyme.  My favorite song of the set was "I'm On Fire," - hands down. The song began with a solo blues bass line (kind of like Led Zeps - "Dazed and Confused"), with Gika almost quietly repeating the lyric "Cool hand, steady trigger finger." The entire lyric was both sexy and intriguing.  My second favorite among quite a few great songs, was "When The Lillies Die,"  I liked the whistling keyboard patch against the constant snare beat and distorted guitars. 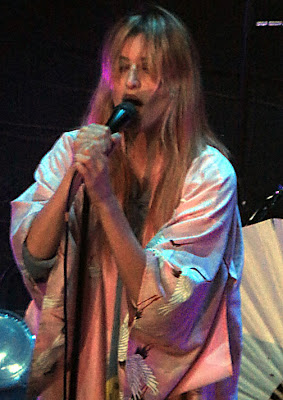 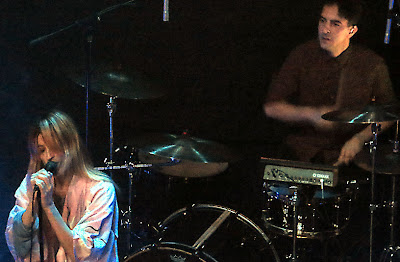 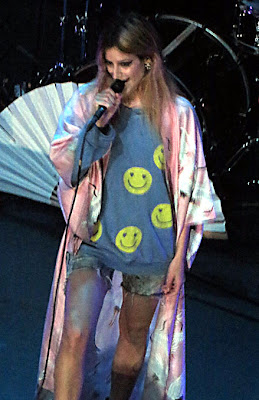 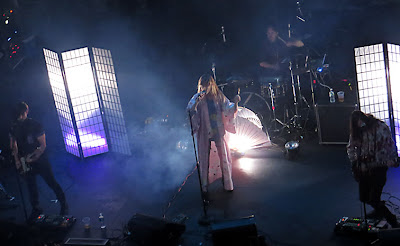 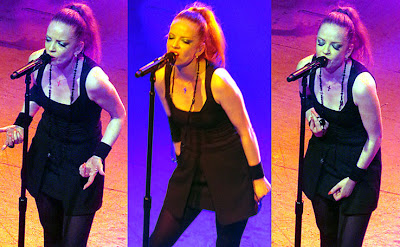 Garbage's set began with music that sounded like a classical prelude which segued into electronic music over a breakbeat as the band took their places on stage for "Push It." For my first time seeing Shirley Manson in person, I was loving her bad-ass posses and rock-n-roll stances. To me she looked like she could be a villain in Batman movie along the lines of Cat Woman. Before going into "Automatic Systematic Habit" she chatted up the New York audience a bit by telling us that the band had never ever played T5 which is what a (rock) venue is supposed to feel like.


Manson got everyone to sing "Blood for Poppies"  theme (Oh -Ohh- oh, oh) by singing it acapella and having the audience repeat after her. During the song Duke Erikson and Steve Marker traded off guitar parts as they did throughout the show, while touring bassist Eric Avery from Jane's Addiction kept the bottom thumping. After the song, Manson mentioned there were technical difficulties but none that I noticed from where I was standing.


I loved all the songs in Garbage's set, but my favorite was "The Trick Is To Keep Breathing."  I was unfamiliar with the song but it didn't matter because it drew me in after hearing it for the first time. (... isn't that why bands tour?).  The other surprise in the Garbage's set was that they did 3 ballads, two of which were in key places. I was surprised they did "Coffee," but was even more surprised that they did "Beloved Freak" as the last song and "You're So Fine" to end the encore.  By stating I was surprised, I don't mean it as a criticism.  I loved the ballads - I just keep finding that nowadays rock bands leave them out or play them sparingly.


During the encore, Marissa Paternoster came out on stage in what Manson referred to a pilgrim's outfit.    Manson kept referring to Paternoster,  who is from the band Screaming Females, as "Sweet Pea,"   I saw Screaming Females when this blog was really young, but since I was really impressed with Sweet Pea on Friday night - I might just give her and her band mates another listen.


After the band encore, Duke Erikson sang a song center stage to pre-recorded music. With a pork pie hat on and his mic held firmly in both hands, Duke's song felt like the closing song to an old TV comedy show. (I'm thinking Carol Burnett, or even better - Bob Hope singing "Thanks For The Memories." )  It was off key and a little weird but heartfelt nonetheless. 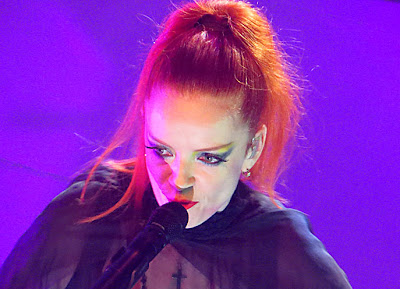 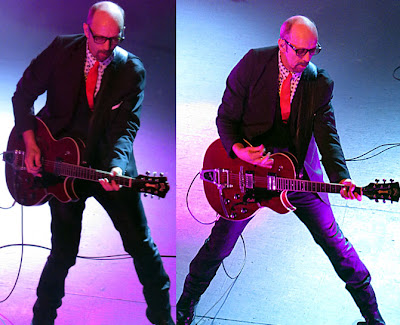 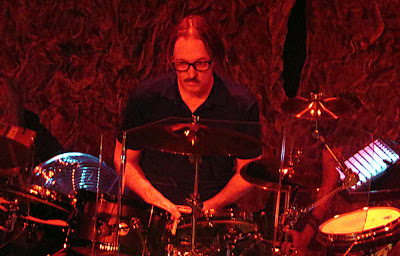 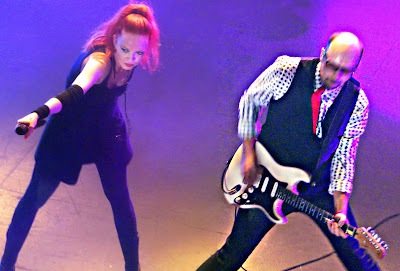 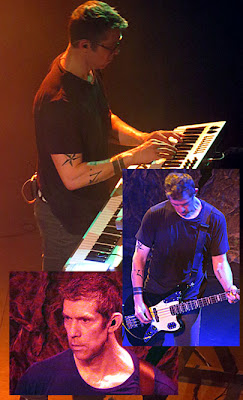 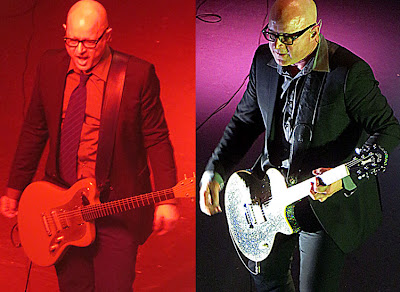 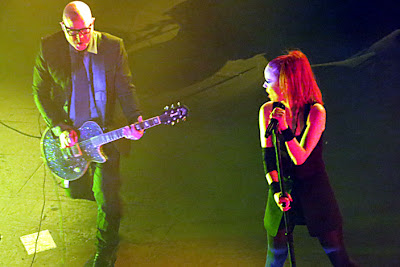 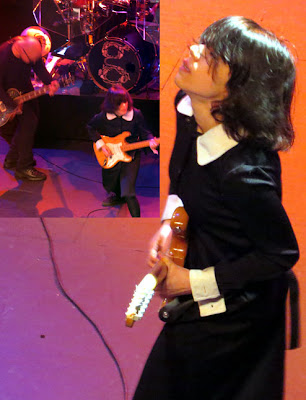 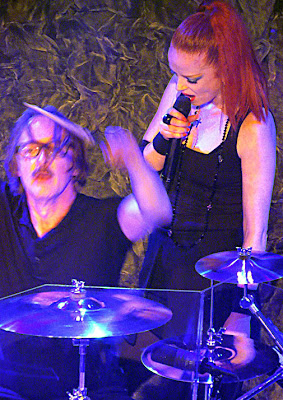 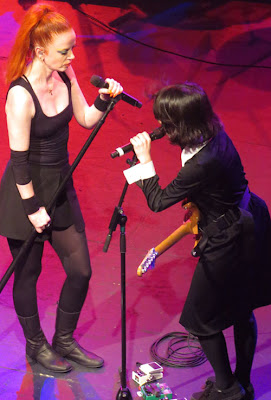 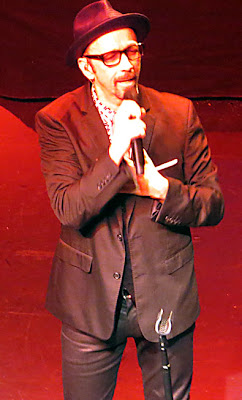