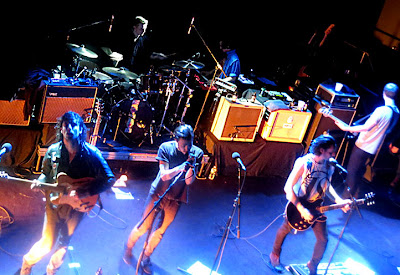 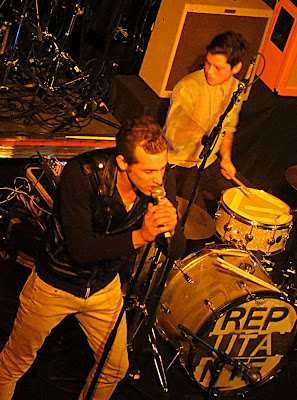 The Saturday night of The Maccabees show was one of those bone chillen' winter evenings that Daddy wanted to keep his tired ass home.  I did want to see the show for the purpose of this blog but walked out of my apartment like a little boy who wasn't getting his way.  I guess I remembered what Mom used to tell me when I really was a little boy "Go Babe - you'll feel better when you get there."  And she was right. It wasn't the most happening evening of my life but it was mildly eventful 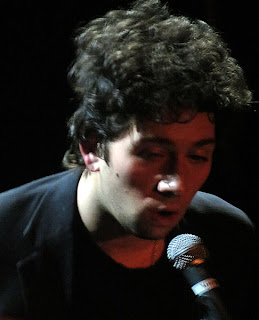 I have to admit, there are certain performances I just don't get. People applaud and shout "We love you" to the person on stage and I go "huh." Matthew Daniel Siskin is Singer/Songwriter working under the pseudonym and project name "Gambles." Why? I don't know.  His claim for fame? I don't care.  Am I missing something? Maybe.

Larry Fitzmaurice's Pitchfork review of Gambles song "Trust," states "it's a burned-out slice of doomy folk music featuring Siskin's cracked vocals and vague, ominous lyricism."   I thought that statement was kind.  What I witnessed was Gambles singing in the dark howling out lyrics to the same guitar strum for more than 30 minutes.   Along with his songs, came a bravado giving him the right to be philosophical.  Oye.  Okay - some people see something in the guy - but I don't.  I'll leave it there. 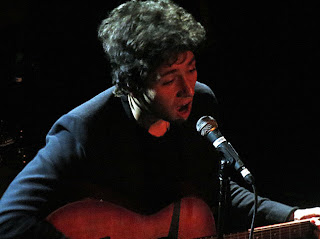 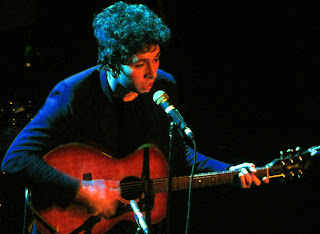 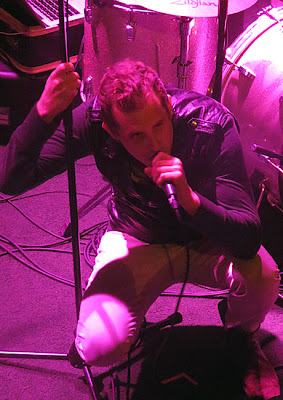 Reputante pronounced "rap -ou- tant," is a band I found myself liking a lot.  In a 30 minute set they managed to do 9 songs which were not very long but got straight to the point (as in musical idea.)  I thought they also took a risk as an opening band by opening up with a slow ballad.  Lead singer, James and the man responsible for forming the band, though not very cute, was awfully sexy. I haven't read any real info on the band, nor was I even able get last names. But I did find videos of a very young James (Levy) on YouTube captioned as Mr. Reputante. If I'm not mistaken, the videos were taken in somewhere near Coney Island/Brighton Beach.

Two very different bands came to mind as I listened to Reputante.   First and mostly, Simple Minds with a smidgeon of Ramones.  Perhaps some of what first came to mind was influenced by the video of Michelle Williams on an amusement park ride for the song "Safe and Sound." (Per Brooklyn Vegan, the video clip was taken from Sarah Polley's 2012 film "Take This Waltz.") The vocal reminds me of Jim Kerr.  I believe the current tour is Reputante's initial outing as band, but I envision that I will be writing more about them in the foreseeable future. 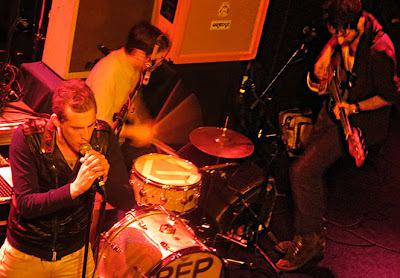 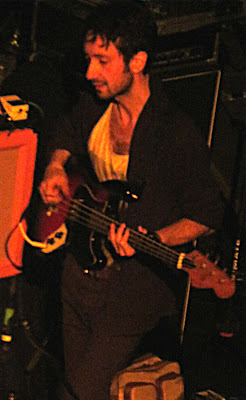 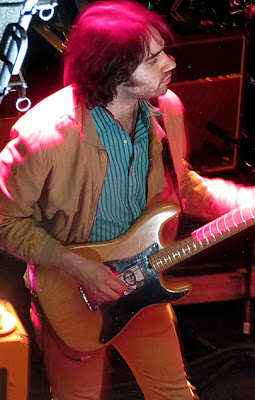 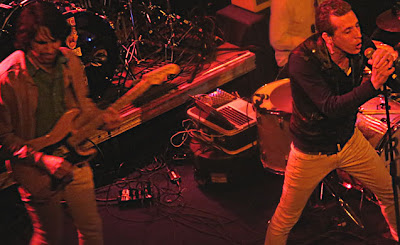 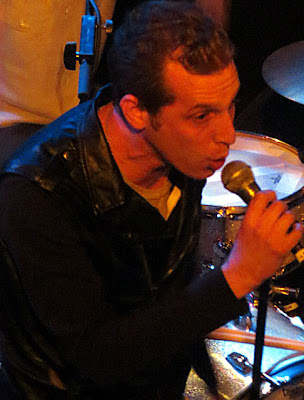 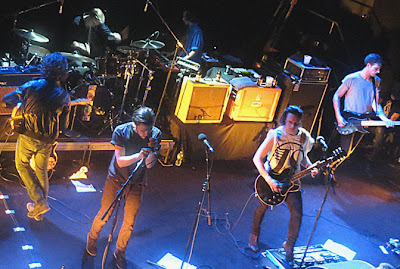 I got outside of MHOW about 20 minutes early and waited on the ticket line which was to the side of the people waiting getting in.  As I was standing there, the adorably cute Felix White walked up, chatted up a few of the woman in line and of course, took lots of pictures.  Felix has the kind of face you just want hug which lots of young woman did as their friends cameras flashed.  I thought to myself - here it is - one of the main reasons young (straight) men form rock bands.  When I was taking photos of the band two hours later, I couldn't get a decent shot of Felix White with his guitar because he often stood behind the row of ceiling speakers obstructing my view.

In other news, Florence Welch of Florence and the Machine was hanging out in dressing room and walking out on the side upstairs balcony to check out the band.  I saw a red haired woman in a dress across from where I was sitting and thought it was Florence but then didn't give it further thought.  (A woman wearing a flowing dress in concert hall is pretty noticeable since it is not the norm.)

I enjoyed The Maccabees but I can't say I loved them as much as their audience did.  I found that  their songs had a sameness to them that isn't on their recordings (and that's a good thing.) The songs that stuck out were few like "No Kind Words" and were songs mostly featured in the encore like "Toothpaste Kisses" and "Pelican."  Admittedly, I didn't listen to the band much before going to the show - but I was hoping they would win me over.  Let's just say they kept me occupied. 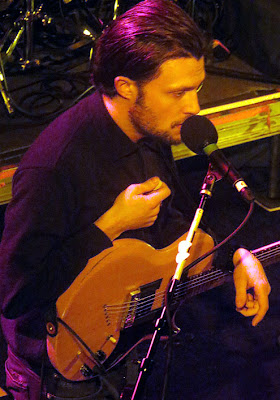 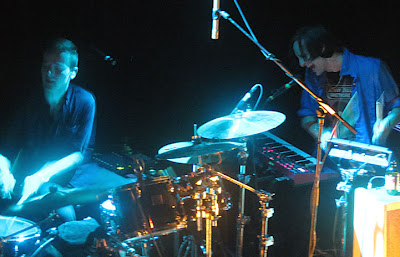 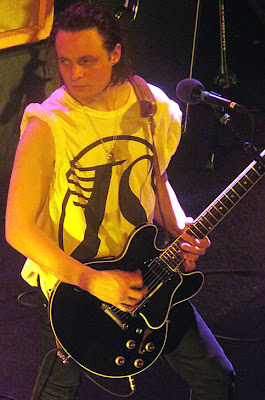 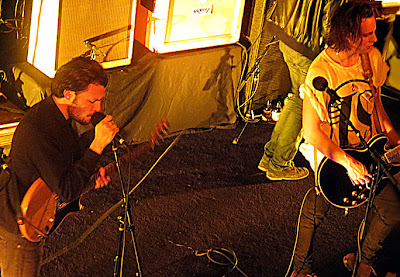 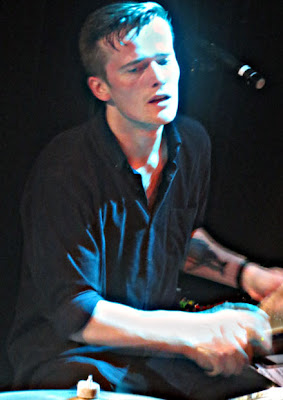 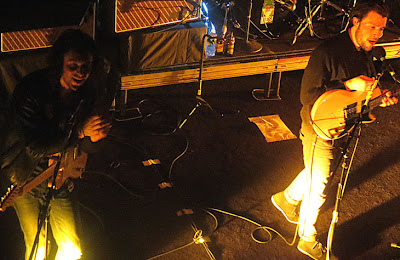 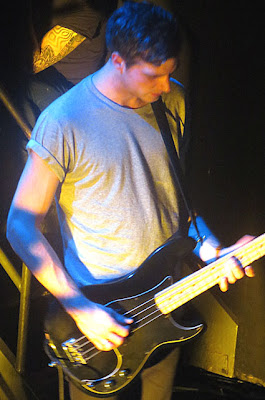 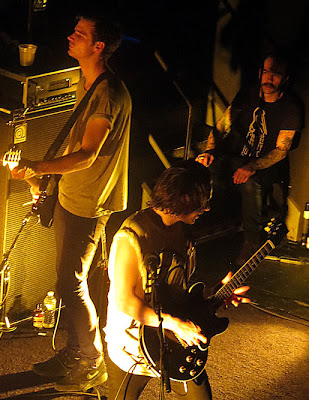 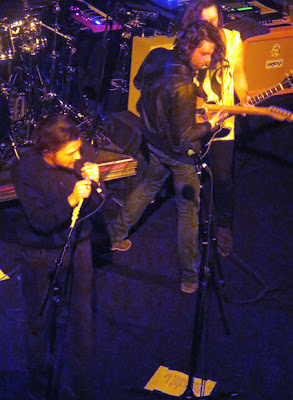 Joining The Maccabees on tour is:
Will White – keyboards and samplers

Email ThisBlogThis!Share to TwitterShare to FacebookShare to Pinterest
Labels: All Postings, The Maccabees/ Reputante/Gambles