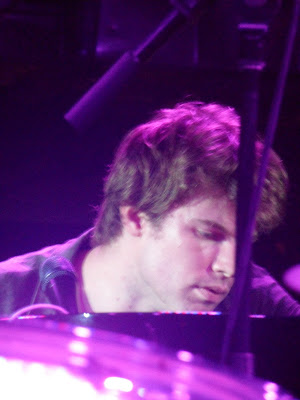 Friday night was my forth time seeing Doveman's monthly show at Le Poisson Rouge and, although each show has been different, there was definitely something special about Friday night's installment.  I'm not sure if it was the instrumental pieces or the fact that I finally attended a Doveman show with a good friend but whatever it was, the evening had a special je ne sais quoi. 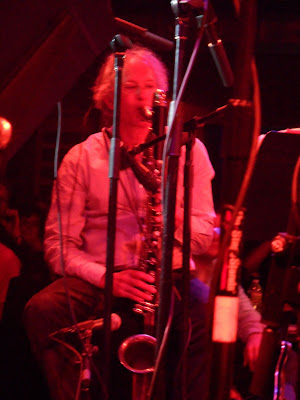 First off I have to mention, that after months of trying to figure out the name of an instrument that Doug Wieslman was playing,  I finally asked Wieslman what it was, as he was exiting the stage. Prior to Friday night I kept thinking Wieslman was playing some sort of hybrid sax with a body that looked like a clarinet. But in fact, he has actually been playing a bass clarinet. Mystery solved; earlier blog entries updated where necessary. 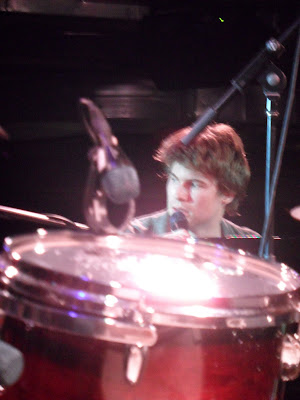 As usual, Thomas Bartlett aka Doveman was the first musician to walk on stage and place himself behind the piano. He started out by saying "it's so quiet - we haven't even started yet!," Bartlett began the set with a few waltzes written by other people.  Bartlett played the first song by himself, introducing it as being originally by Flashpapr. The band then joined Bartlett once he segued into a second song. I wasn't familiar with the song but I do know it was a minor blues progression. The lyric said something like "I got what I paid (came) for, now my cupboard's bare...if this is it, how will (would) I know - it's been so long."  Both songs were great in showing off Bartlett's talent at improvising on piano. If anyone reading this knows the title of the second song please feel free to leave a comment. 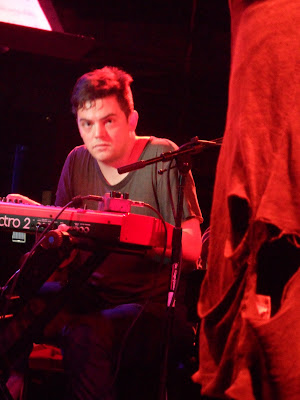 The third song Doveman  played was"Honey" which he also performed the first time I saw him in April.  This time around the song included Nadia Sirota on violin, Julia Stone on trumpet and Nico Muhley playing the Nord to right of Bartlett (Muhley was in the April show but I don't recall him playing on the song.) "Honey" had a very warm feel to it and was a great compliment to what followed. 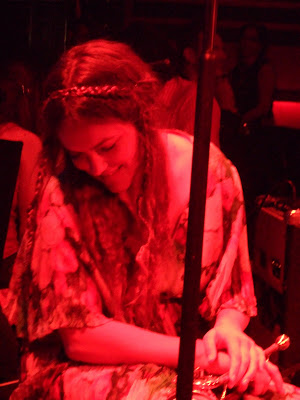 Next up came The Bandana Splits in, what looked like, red and white cheer leader outfits. Dawn Landes, who I believe formed the trio, came out with a small lit multi-colored white tambourine. The Bandana Splits' harmonies are slightly reminiscent of the Andrew Sisters but fortunately they stayed away from anything sounding like the "Boogie-Woogie Bugle Boy;" they did material that was more contemporary and their own. (The "BBWB" thing has been done by everyone from Bette Midler to Christina Aguliera - it can be fun but I personally don't need to hear it again.) 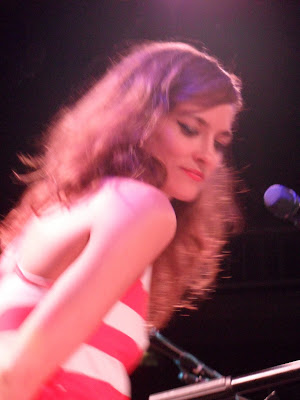 Bandana Splits started out with "Sometimes" which had an early sixties beat and feel to it, except for the bubbly sound that was being played on the Nord (I think Bartlett was playing it at that point.)   The sound made me think of VH1's pop up video. The Bandana Splits next did "My Love" which had the same kind of bass and vocal harmonies as "Summer Nights" from Grease or the 60's song "Hang On Sloopy" by The McCoys. 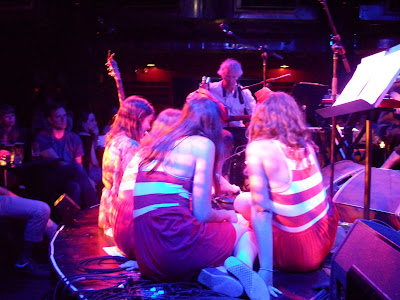 As a small tribute to Amy Winehouse, who passed away the previous weekend, The Bandana Splits did "You Know I'm No Good."  It was a really sweet cover arrangement, of a song that isn't stylistically too far away from their own material. Dawn Landes did the lead vocal, joined by Annie Nero and Lauren Balthrop on background vocals and harmonies for the chorus. I noticed that whenever the three did harmony during the song, Landes would step on a pedal. I couldn't figure out if was to give her vocals a little reverb or a bit of chorus, it might have been neither - but I am curious to know what it was. 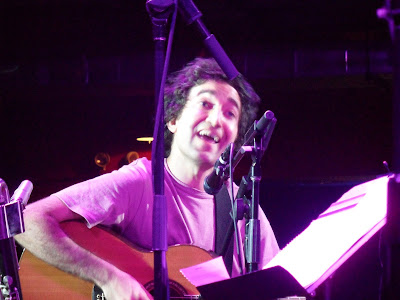 Bartlett introduced and played piano along with the unexpected Dave Deporis who came out to do one song on acoustic guitar.  The song was "Swan King In The Snow" which I later checked out on his MySpace page.  There was a little trouble with Deporis's guitar, how it should have been mic'd and where he should position himself on stage.  There was also a point when an audience member came out of the audience to help with a mic cord. Unfortunately the 5 minute disruption, as well as the sound quality, took me out of the moment making it hard for me to focus on what was actually a beautiful and pensive song. 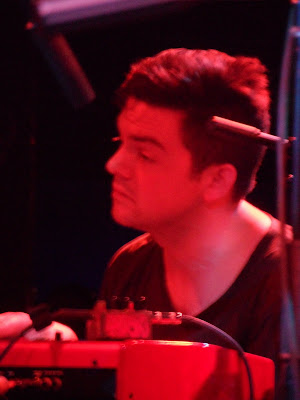 Bartlett brought back Nico Muhly to do material they wrote together as Peter Pears.  I knew that Peter Pears was a famous tenor and worked with Benjamin Britten.  But I didn't know that Pears and Britten were lovers until Nico Muhly stated it during the show.  (I should have picked it up from bios which state Pears and Britten as having a "strong friendship" or being "close companions.")  Muhly stated that he and Bartlett were looking for a name for themselves as collaborators and that Peter Pears was the name that was the most or least appropriate. 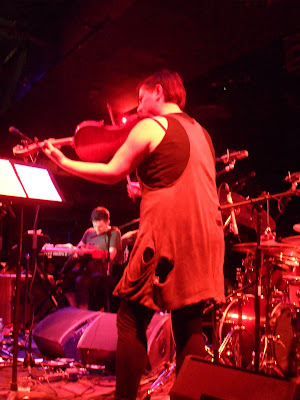 The first song had a rhythmic and melodic pattern that was first played on piano and then picked up by Nadia Sorita on violin as Bartlett sang over both sections. Muhly introduced the next piece, which was in two parts, as an instrumental he wrote for Sorita and Bartlett but said it also worked if he was involved. Muhly explained to the audience that whatever Sorita did on violin was always the same and what everyone else did would always be different.  When it came time to do the second part, Muhly said "so we're going to do another one of those with different notes." 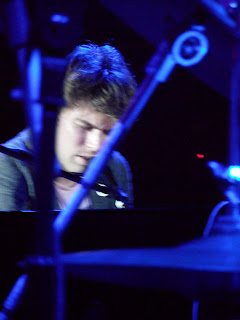 The Peter Pears section ended with Bartlett doing another song. The second song still had a bit of a classical feel but it leaned more toward being a pop ballad than the song Bartlett played prior to the two instrumental pieces. I enjoyed the Peter Pears section. I think it worked well as musical departure from the other material in the show. 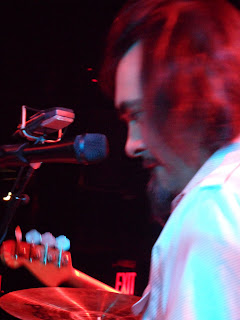 Bartlett and Muhly followed up the Peter Pears material with a Smog song which someone had requested by email.  For a second time, Bartlett gave drummer Ray Rizzo directions on how he wanted him to play a song, but Rizzo wasn't having it. There was a very small exchange of words back and forth but it was hard to tell if they were clowning or serious.  I suspect a little of both.  Smog's"Teenage Spaceship" as performed by Bartlett went directly into his song "The Best Thing." Loved the latter but wasn't thrilled by the Smog cover, perhaps because I'm not familiar with the original. 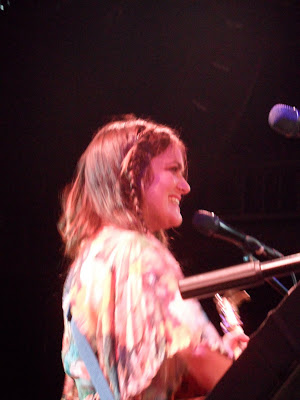 The highpoint in the entire show had to be Julia Stone. I had listened to Angus and Julia Stone prior to the show but none of the recordings captured the powerful resonance of her voice, nor the emotion. There was a subtle dramatic quality to Stone's vibrato that really felt like it grabbed hold of me every time it happened. Bartlett re-introduced Stone and said that they were going to test drive some of the songs from the recording that they were working on together. They actually did two new songs, both somewhat sad and/or melancholy, both beautifully delivered.

Bartlett usually asks most of his guest performers to do a cover.  Julia Stone picked The National's "Bloodbuzz Ohio."  Landes joined Stone on background vocals on the refrain. The arrangement seemed to lean toward more of a country feel. I think it was at that point during of the show that I noticed that Stone was standing (and sometimes twirling in her flowing dress) barefoot which can be a very dangerous thing to do on a stage filled with wires.

Stone's last song was one which she has already recorded, titled"My Baby." As she sang, I couldn't help but think of Rachel Sweet's song "B-A-B-Y, " even though it is a much different song.  Perhaps it is because both singers have that nasal sounding little girl resonance. 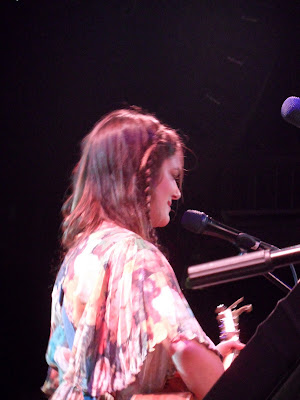 The Bandana Splits came back out to join Julia Stone on background vocals for the last song.  Bartlett who seems to love to do everything on the fly, lead the band through a cover of The Thompson Twins "Hold Me Now" as he read the lyrics off of the Internet on his Mac laptop.  I don't know if Brad Albetta was familiar with the song because he was playing the bassline like it was a disco song, instead of having the bassline imitate the rhythm of the chorus (and title) like it does on the original recording.  Nonetheless the impromptu cover arrangement worked and was a fun ending for a terrific show. ("terrific?" Oh dear! - sounds like I'm quoting Lawrence Welk!)

Doveman announced during the show that he will be back with Chris Thile in September and with Lori Anderson in October.  I'm going to try and make it, but even without either of those guests, Doveman's Burgundy Stain Sessions are always a memorable musical experience. 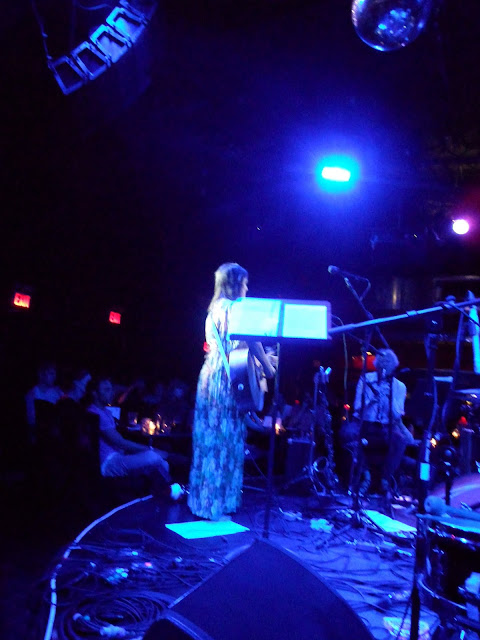