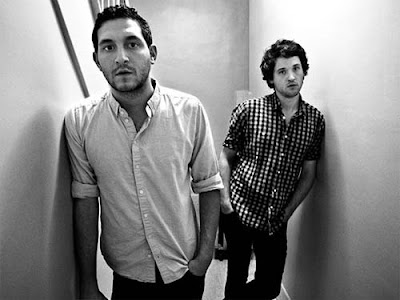 On the way home from seeing Cut Copy, I noticed two guys sitting across from me waiting for the L train to pull out of the 8th Avenue station (8th Ave is the first/last stop on the L subway line.)  One of the guys had a Cut Copy tee shirt hanging from his waist.  Assuming they had seen the show, I asked them if they enjoyed it. The guy without the tee, said the show was great and the guy with the tee smiled.  I then asked what they thought of Midnight Magic.  One guy said he really liked them but the smilie guy gave me that attitude my gay brothers often have that makes me want to punch them in the face.  With an expression like he had gas and was farting at that very moment, he said that he liked Holy Ghost, who had opened for the previous two Cut Copy shows and that I should check them out online.  End of conversation - I gave a false smile and thanked him for the tip. 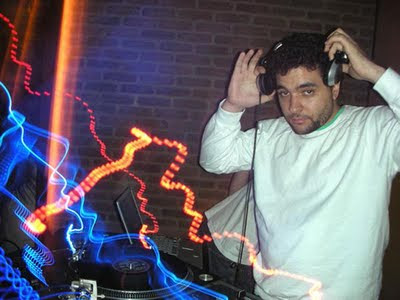 In February, I went to see Friendly Fires at Bowery Ballroom. I found the program for Friday night's Holy Ghost show paralleled that show.  Both shows opened up with a DJ and then the duo, The Hundred In The Hands. At least this time around the DJ, Blu Jemz, was on stage. For the Friendly Fires show, the DJ was set up in the balcony.  For most of Friday's show, and especially through Blu Jemz set the room was really really dark. Our eyes eventually adjusted but me and my friend Jan were not fond of walking around upstairs in the dark. 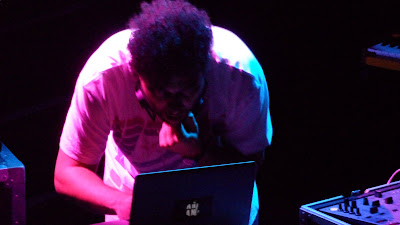 Blu Jemz set consisted of mostly of music by contemporary dance bands and remixes of 80's records. The early part of his set consisted of Kraftwerk's "The Model" which eventually went into a song that had beats reminiscent of Loose Ends "Hangin on a String." (All you have to do is hear 5 seconds of the song and you know exactly what I'm talking about - it was incorporated into a gazillion R&B songs in the 80´s & 90´s.) There were quite a few recordings I was unfamiliar with but one I definitely loved was  a remake of Donna Summer's "Sunset People" by a male vocalist with an added rap. 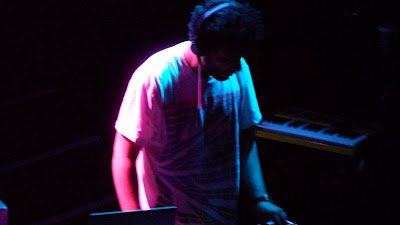 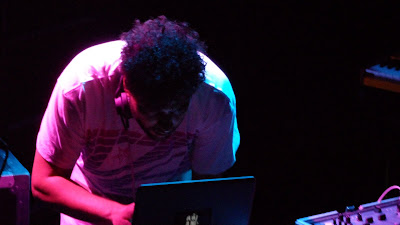 Some of the remixes and songs Blue Jemz played by his contemporaries (that I recognized) were "Hearts on Fire" and "Take Me Over" by Cut Copy, "You Put A Smell On Me" by Matthew Dear, "I Want Somebody to Love Me" by Mark Ronson and "Beam Me Up" by Midnight Magic.  At 9:30 two guys came on stage and moved Jemz´ DJ setup off to the side, so they could put things in place for The Hundred In the Hands. The duo started at 9:45 directly after the last song of Blu Jemz set.

THE HUNDRED IN THE HANDS 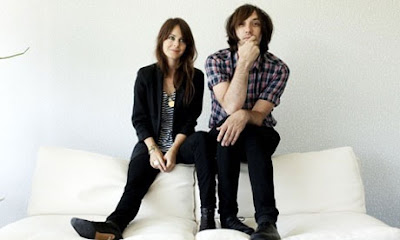 The Hundred in the Hands were definitely just as loud and basically did the same set as when I saw them open up for Friendly Fires.  Therefore there's not much more to tell, especially since the last time I saw them was only two months ago.  Their set seemed to go by as quickly as the last time but this time it felt a bit tighter.  Jason Friedman's guitar work seemed to break through the duo's own reverberant sound with clarity more than last time. It may or may not be the difference in venue, but even some of the sequenced bass lines and drum parts seemed crisper. 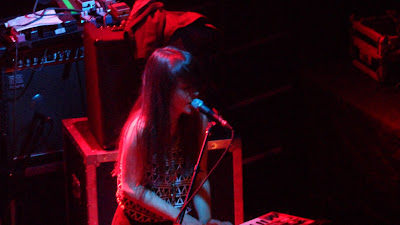 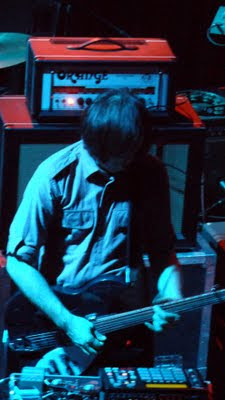 As I did the last time I saw them, I feelThe Hundred in the Hands have a vibrant and unique sound worth hearing. And although the audience on Friday night loved them, I don't think they are being paired with the right bands. Both Friendly Fires and Holy Ghost are great bands, yet they are both very funk and dance oriented. I would like to see The Hundred in the Hands with bands that I consider a little darker like Little Dragon, The Antlers and maybe even Young Galaxy. 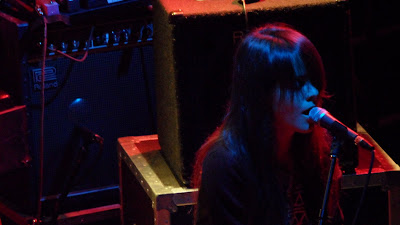 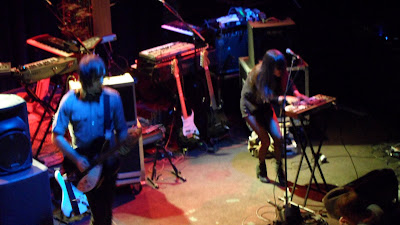 Holy Ghost walked on stage at exactly 10:49 to a cheering audience that was totally ready for their set. As the opening keyboard strains of "Say My Name" played, lead vocalist Alex Frankel jumped up and down like a fighter preparing for a boxing match. Except Frankel kept both hands in his jacket pocket, which was over his opened collared shirt revealing his V-neck tee shirt, (I guess his Mama taught him the importance of wearing layers.) It was kind of odd that Frankel stayed in the dark until around the second chorus but what was even stranger was that drummer, Nick Millhiser was tucked in the corner on stage right.  I mean there are only two people under the name Holy Ghost, shouldn't they both be, if not front, at least center? Ya think? 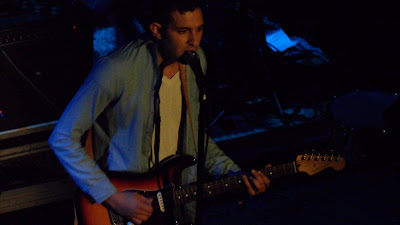 Center stage, behind Frankel, was Erik Tonnensen surrounded by 3 keyboards - one of which was a moog. To his left was Sam Jones, also on keyboard.  Both Tonnensen, Jones and guitarist Chris Maher did background vocals on "Say My Name" and throughout the show, along with Nancy Wang. 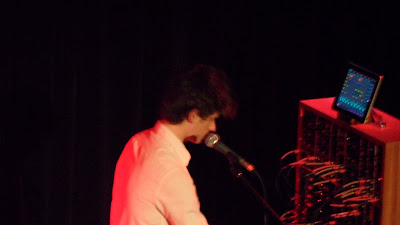 Millhiser kicked off the second song with a bounding kick and snare beat and Frankel joined in by playing the  snare drums, tom and cowbell setup that was between him and Maher. The song was "It's Not Over," which reminds me of New Order with both its driving synthetic bassline and by the way the lyric is sung on the beat. At several points during the song Frankel and Maher played the drums off of each other.  Frankel introduced Maher who took a solo by playing high pitched descending melody lines on guitar that reminded me of Flock of Seagulls.  (That isn't a put down - Flock of Seagulls were an okay band, they just had bad hair.) 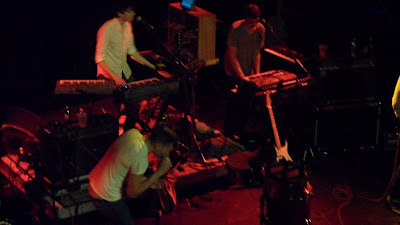 For "Hold My Breath" Frankel played the prominent lead guitar riff while Maher played bass. I like the song but haven't found the lyric online yet.  I'm curious to know what the repeated "joint account" line is about at the end of the song.  The next song "Wait & See" had the audience singing along which is probably why Frankel had a confessional moment when he needed to tell the audience that he "fucked up the lyric in the second verse." It didn't matter, the audience loved the song regardless. 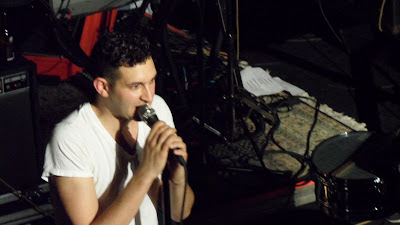 "Slow Motion" and "Do It Again" had the audience dancing and clapping along.  Jones played the weird sounding sample on the out of  "Do It Again." (Didn't write it down but I think. he played on pads instead of keyboard).  One of the things my friend Jan picked up on was the band was playing predominantly analog equipment which was really evident on "Hold On" with it's crunchy sounding bassline and arpeggiated synth line. 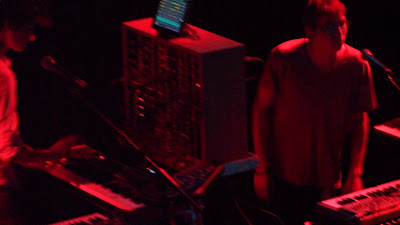 I watched the audience react to Holy Ghost's cover of "On Board."  They seemed kind of bewildered. They were bopping along for most of the show, except they seemed to listen more during the Friendly Fires song. After that, Holy Ghost's set started to climax with " I Will Come Back" which the audience really got into and the band seemed to milk.  A more robotic bassline propelled the song forward as Frankel and Maher added percussion between vocals and guitar parts.  Millhiser held the fort with, a steady kick-snare beat and, his ever present intricately rhythmic high hats. 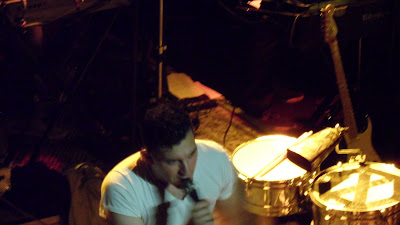 Holy Ghost ended with "Jam for Jerry," which always sounds to me like an homage to the band Pheonix. Frankel´s vocal phrasing in that particular song sounds like he is parodying Thomas Mars.  I think "Jam for Jerry" is a cool song, I'm just wondering if what I'm hearing is intentional. (Maybe there´s a back story I missed - feel free to leave a comment.)

Holy Ghost's came back for their encore with  "Static On The Wire." and were joined by Chris Glover from Penguin Prison on tambourine and Dave 1 from Chromeo.  The audience cheered when Dave 1 in sunglasses played his tasty solo.  Dave later played a guitar part that sounded very very 70's - It actually sounded like the lead guitar on The Isley Brothers' "Who's That Lady." The show ended with Alex Frankel thanking the audience for coming and inviting them to meet the band at Cameo Gallary (bar) for a beer. 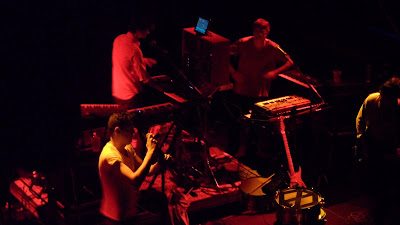 All in all, Holy Ghost's set was great.  Musically the band is very tight.   I do wish I had seen Holy Ghost with Cut Copy. I'm sure that between both bands, the shows that they played earlier last month were really hot!

Email ThisBlogThis!Share to TwitterShare to FacebookShare to Pinterest
Labels: All Postings, Holy Ghost / The Hundred In The Hands / Blu Jemz