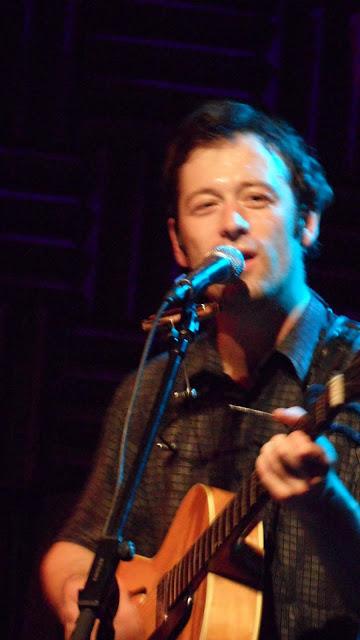 I heard Henry Wolfe (Gummer) for the first time this week on WNYC 's radio show Soundcheck and automatically thought "I gotta see this guy." He seemed a little nervous when host John Schaefer was interviewing him but still managed to perform two of his songs really well. When Wolfe was asked to clarify some of his musical influences, Wolfe stated that for the past few years he has been listening to songwriters from the period between 1970 and 1983. 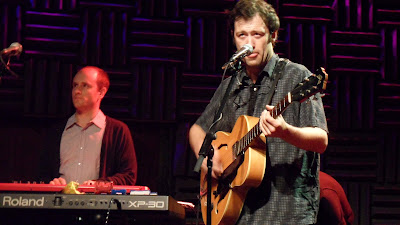 When I read Henry Wolfe's bio I was surprised to that Nico Aglietti and Aaron Older (of Edward Sharpe and The Magnetic Zeros) had produced Wolfe's newly released first CD "Linda Vista."  It then dawned on me that I was thinking Indie as opposed to organic, which is part of the aesthetic that Wolfe was referring to during the Soundcheck interview. The songs on "Linda Vista" are basic arrangements that support the melody and the lyric. The music is pretty much live and laid back with not a lot of overdubs or instrumental riffing. 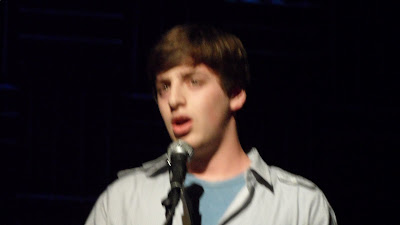 On Wednesday night, comic Alex Edelman appeared on stage to do two and a half minutes worth of jokes before introducing Henry Wolfe. (I didn't have time to take a better photo.) As he was about to do his first song, Wolfe realized that he had forgotten a guitar pedal while setting up and quickly grabbed it from behind the stage curtain.  The false start was the kind of quirky mishap that at times can endear a performer to his audience, especially since Wolfe was able to joke about it. 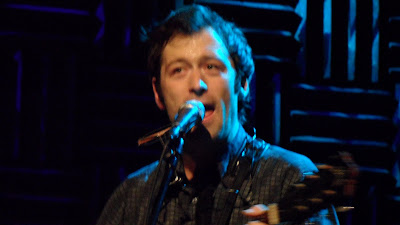 Somewhere in the middle of Wolfe's set, I leaned over to my friend John and commented that I heard a very strong Randy Newman influence. (I was particularly hearing it in Wolfe's vocals.)  I think Wolfe was conscience of his influence which is why he started the set with "Dayton Ohio 1903." I didn't know the song was Newman's until I looked it up when I got home. (duh!). Unlike Harry Nilsson, who originally covered the song, Wolfe played the song on guitar. Wolfe also set the song up beautifully, by playing  a long instrumental intro. 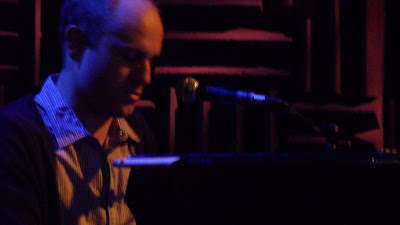 Wolfe was joined by Tyler Cash on piano for his second song "Baby, I Won't Cheat."  I originally thought the song was also a cover but found out by looking around online that it's a song Wolfe's been demoing. There's is video on Youtube of Henry Wolfe recording the song in the studio to analog tape. The video has Ryan Richter on pedal steel guitar but on Wednesday night, Wolfe replaced Richter's part by playing harmonica.  I'm surprised the song isn't on Linda Vista, it has a melodically intriguing refrain on the line "Baby, I won't cheat when you're in New Orleans." 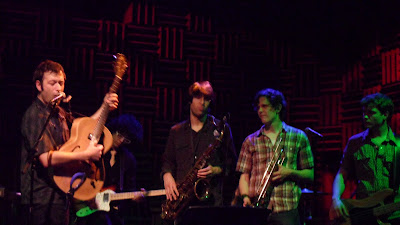 For the third song in his set, the band assembled on stage before Wolfe explained that he would be performing his new CD from start to finish.  The opening line of Wolfe's explanation sounded like a pastor's introduction at a wedding ceremony. He said "We are gathered here, on this rainy night, to celebrate the release of my very first full length record..." He then performed "Used to Be." 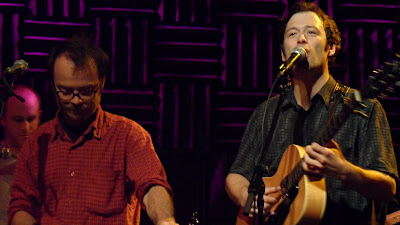 I had heard Wolfe perform "Open Up the Door" on the radio and watched the video which he announced had been just released. However, hearing  the song live on Wednesday night was much sweeter. Cash played a piano keyboard patch on a Nord (I think it was a Nord - it was red) and Phil Carluzzo played a pad on a roland keyboard that was little too loud but nonetheless added more interesting color to the song along with Wolfe's harmonica. 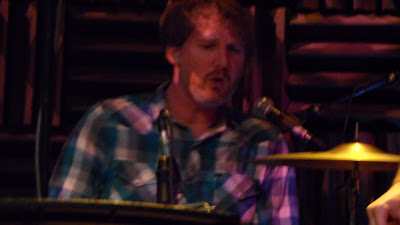 Wolfe has his second false start of the evening when he started to play the "The Third Act" on his CD instead of the third song. He immediately corrected himself by emphatically stating "we're doing this in order and that is not what comes next"  The  next song was actually "Someone Else," which featured the band doing cool background vocals. I specifically noticed drummer Brandon Goldstein who did the bassy background vocals on the chorus. During the musical piano break, it was kind of cute to watch the whole band dance in place. 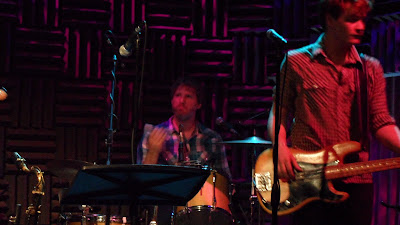 Wolfe's arrangement of "For the Turnstiles," with it's slow steady groove was one of highlights of the show. As opposed to Neil Young's recording which he played on banjo, Wolfe's arrangement is carried by a heavy bass which on Wednesday was played by Lorenzo Wolf.  The arrangement was augmented by resonant piano chords, harmonica and Nick Diaz's electric guitar strums and fills. 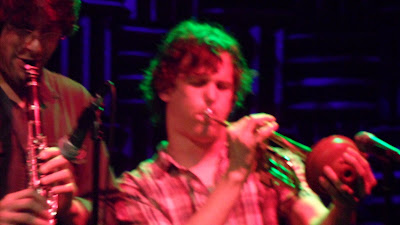 "Linda Vista" the title song of Wolfe's CD is an instrumental with a lot of really nice harmonica.  For the song, saxophone player Jake Saslow changed over to clarinet and player Sam Oats muted his trumpet.  After the song, Wolfe explained that he now resides in California where it doesn't rain half as much as in New York.   (New York City has had about a week and a half of rain.) He then did the song "Little Room" which was one of my favorite songs in his set and is also one of the songs that reminded me again of Randy Newman. Wolfe extended the song with a tag which featured members of the band singing harmony as Wolfe did a vocal adlib.  As soon as "Little Room" ended, the band immediately started "Stop The Train" with it's 2/4 beat which felt like a sort of breezy shuffle. 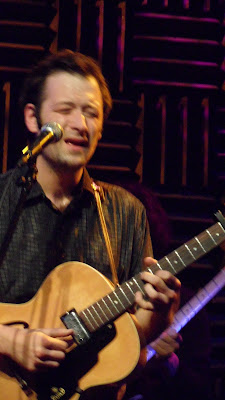 "Errant Lover" was another one of my favorite moments during Wolfe's set.  As I watched him sing, his vocals and his hand gestures made me feel like the person he was singing about was right in front him. I appreciated that Wolfe's delivery was just as powerful as his lyric.  "Errant Lover" like "Little Room" also had a tag ending but this time the tag was Beatlesque with a descending guitar line that reminded me of "Dear Prudence." 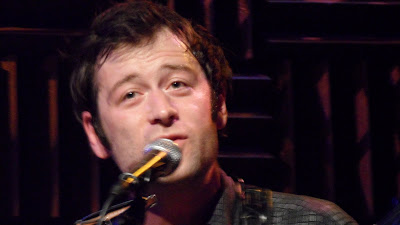 The last song of Wolfe's set, and his CD, is "Van Nuys." The guitar on the song (and perhaps the steel pedal guitar on the recording) ironically has the same melancholy affect on me as Dylan's "Lay, Lady, Lay."  I like both songs but they make me feel a little sad. 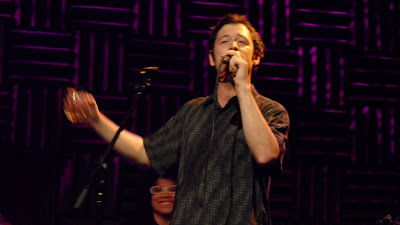 Wolfe came back for the encore and teased the audience about starting the set over from the beginning of the record.  Before singing "All Things Good" he asked the audience if they would sing along and then stated that his mother would be definitely singing along. Wolfe's mom, Meryl Streep, seemed to be keeping a low profile while watching the show from the booth not far from where I was sitting. Wolfe also mentioned his father, sculptor Don Gummer, who he said would have definitely been there had he not been in the hospital. Being sentimental, I of course, recalled when my mom was alive and used to show up at my gigs. It is the kind of support and love I fondly remember. 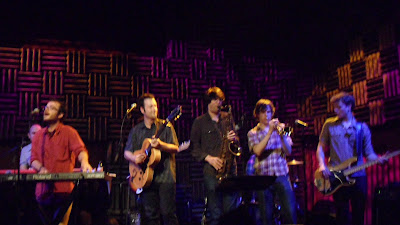 I really loved Henry Wolfe's songwriting but more than just his songs I enjoyed the way he and his band worked together to create a very special evening.  My first impression when I heard him was correct, Wolfe is a must see.
Set List
Dayton Ohio 1903 (Randy Newman Cover)
Baby I Won't Cheat
Used To Be
Open Up The Door
Someone Else
The Third Act
For the Turnstiles (Neil Young Cover)
Linda Vista
Little Room
Stop The Train
Errant Lover
Van Nuys
Encore:
All Things Good
The Members of Henry Wolfe's Band are:
Tyler Cash - keys
Nick Diaz - guitar
Phil Carluzzo - synth and tambo
Sam Oates - trumpet
Jake Saslow - sax
Brandon Goldstein - drums
Lorenzo Wolf - bass
Posted by Frank Grimaldi

Email ThisBlogThis!Share to TwitterShare to FacebookShare to Pinterest
Labels: All Postings, Henry Wolfe