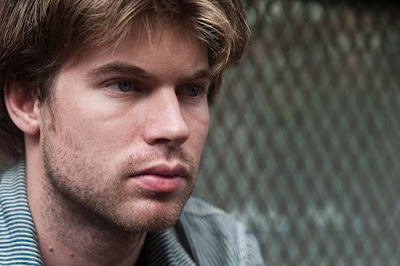 I don't remember when I started to see or hear the name Doveman, but I know I have passed over the name several times since starting this blog. Sometimes band names, especially when they apply to a single person, seem like an enigma to me until they don't. But now that I have seen Doveman aka Thomas Bartlett, I realize Doveman is just a band name and doesn't have any deep meaning.

Before going to Saturday's show, I bought Doveman's 3 CDs on Amazon but I really didn't need to. He actually only performed one of his songs at the top of the show. I didn't have a chance to listen to the first two recordings. I only listened to newest CD, The Conformist, It took me awhile to get past Barlett's whispered vocals and that most, if not all the songs, were midtempo. But after a few listens, the recording grew on me and I really enjoyed it. The burning question then became would Saturday night's entire show have the same feel. The answer was definitely not. 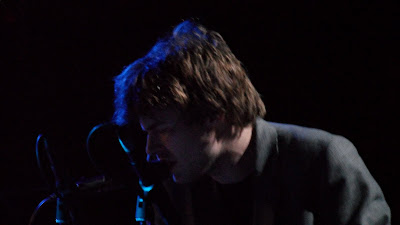 The doors to (le) Poisson Rouge were advertised as opening at 6:30 with the show starting at 7:30. I arrived outside the club at approximately 6:40 thinking I was early. I was early but so were the people in line and those already in the pretty much full house. (Note to self: next time get your ass outside the door at 6:15).

Once I sat down at one of the high tables against the wall, something was telling me that I would be facing most performer's backs during the show. This was indeed the case because although audience was around the stage, most of the musicians were facing in one direction. Rob Moose, Thomas Barlett and later in the show Nico Muhly were the only faces I didn't have to strain to see because of the way the piano and Moose's music stand were positioned. Please keep this in mind when looking at the enclosed pics. I was still able to get half way descent shots of everyone except Sara Quinn. If you want to see great pictures of the show, you can find them on the Brooklyn Vegan website. 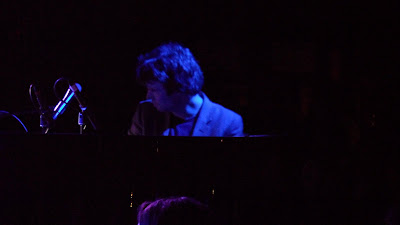 The audience was still chatting when the band walked on stage, but they eventually went silent as Doveman eased into the opening bars of Bartlett's song "Honey." The song had a really laid back folk jazz feel to it with a really warm and beautiful solo by Doug Wieselman. I believe Wieselman at that point was playing some kind of sax but I couldn't easily see him because he was seated on the opposite side of drummer Ben Perowsky. Later, I found out, Wieselman was actually playing bass clarinet. 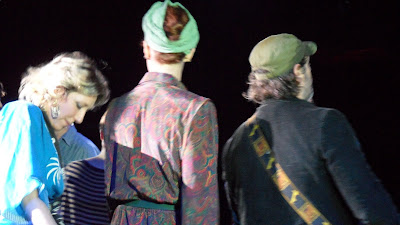 After the first song, Bartlett told the audience the show was the forth of Doveman's monthly show's at Le Poisson Rouge. He said that Saturday was special because it was his best friend Evan's birthday and that all the songs in the show were basically curated by Evan. The songs were Evan's favorite songs sung by some of Evan's favorite singers. It turned out to be a really cool idea because the evening's songs ran the gamut from folk to jazz to standards to R&B.

Bartlett then introduced Martha Wainwright who did a kick ass version of "Tell It Like It Is." The song was unexpected and a great setup for the music that followed. Since the first time seeing Wainwright on 2009 Central Park Summerstage, I'd forgotten that she's a really great vocalist. Funny thing is that there was a baby in audience on Saturday who intermittently let out a "Waaaah" during both Wainwright's and Bartlett's opening songs. The baby kind of added a charm to the show, especially since Wainwright even joked about it before going into her next song "Factory." 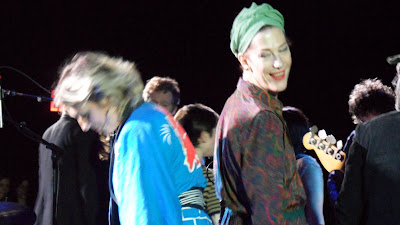 Justin Bond wore a multi-colored paisley bathrobe with a green kind of turban around his head. His outfit reminded me of Lucille Ball. I've never seen Bond (Not even Kiki & Herb) but this was a great introduction. I loved "Genet Song," it's chorus kept playing in my head after the show and during my walk home. Guitarist Rob Moose played a cool warped sounding guitar solo on the musical break which I enjoyed as well.

Hanna Cohen was the one vocalist during the show that I was totally unfamiliar with but equally enjoyed. She did 4 songs, with my two favorites being "Don't Say" and "Laziest Girl In Town." I'm not sure but I believe the very sad "Don't Say" was written by Cohen who at times sounded a bit like Ricki Lee Jones. The feel for "Don't Say" was somber with Wieselman adding color by playing what sounded like a clarinet. (-again keep in mind that I couldn't see him). 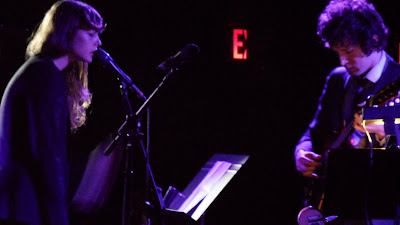 As for "Laziest Girl In Town," I didn't recognize it as being written by Cole Porter. I came accross a very funny version sung by Marlena Dietrich, as I was figuring out the set list of what was performed during the show.  The song actually had an opening verse, but if memory serves me correctly, Cohen skipped the verse when she performed the band's bluesy arrangement. Before leaving the stage, Cohen did an impromptu version of Marilyn Monroe's "Happy Birthday (Mr. President)" 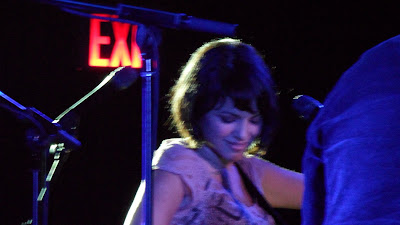 While Nora Jones was setting herself up and making sure her guitar was in tune for her first song, Bartlett said that he wasn't feeling chatty and that he had done a lot more talking in the past 3 shows than during Saturday night's show. Once the audience fell totally silent Jones told Bartlett "Come on chat, come on- I gotta tune - you chat!" Bartlett then told the audience that the next song "Dear Darling" was the second in the show written Mary Margaret O'Hara and suggested that audience check her out on YouTube. I did and being turned on to another songwriter, I didn't know, gave me even more reason to like Saturday night's show. 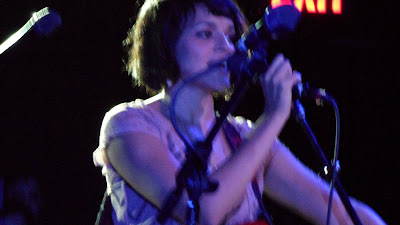 Nora Jones sang "Dear Darling" in a way that reminded me of Patsy Cline. Jones has a remarkable voice, I'm glad I finally got to hear it in person. Nora Jones kept the R&B thing going by doing an Al Green song and Bartlett added a bit of authenticity to the sound by using an organ sound on his Nord keyboard. Of course Nora Jones didn't end her performance without singing "Come Away with Me," though she did say that it was requested by Evan. Since Nora Jones was billed as "featuring," I was surprised that she only did 3 songs. But for me, it wasn't a big deal - as the saying goes - sometimes less is more.

Sara Quin started off her performance with a Prince song before doing her own song "Arrow." I wrote about Tegan & Sara last year when they played Town Hall. "Arrow" is one of my favorite songs and although the instrumentation was a little different than the original arrangement, it held up. Quinn said she was nervous about singing "I'm Gonna Find A Way To Make It Without You," because she felt it was sung by who she referred to as a "real singer." I thought Quin sang the song really well. I truthfully enjoyed it. The song I could have done without was the Prince song. I like "I Could Never Take The Place of Your Man" but basically it's a throw away; the music and lyric make it a cool song but the talk sing melody not so much. 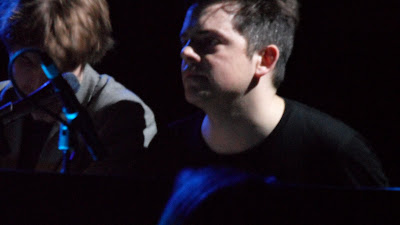 Nico Muhly entertained the audience from where Bartlett had been sitting behind the piano.  He first entertained the audience talking about how he thought Evan would like him to do an instrumental version of a Janet Jackson song. (He improvised melodies from a few JJ songs on the piano while talking.) He then came around to stating that Evan actually wanted to hear Stevie Wonder's "Happy Birthday."  Before playing the song, Muhly said "Evan and I have many times been the recipent of what we doomed to be the upside down smiles of implied misogeny and so this is a simliar form of racist faggotry."   I'm not going to go any further in discribing Nico Muhly's arrangement of Happy Birthday than he did except to say that is was happy, joyous and free! 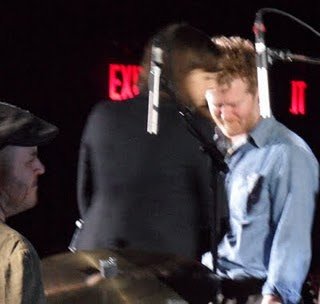 The Stevie Wonder moment didn't end with Muhly but continued with Glen Hansard, from the film "Once." (He is currently in another film playing at the Tribeca Film Festival which is sort of a continuation of "Once," titled " The Swell Season"). There are many great Stevie Wonder songs but the one I always seem to forget  is "Lately." The band left the stage for Hansard's performance and just Bartlett remained. The duo vocal and piano performance made for a really sweet moment. Hansard was the right man for the job, he sang "Lately" just as soulfully as Wonder and even more so than the many people who have covered it. 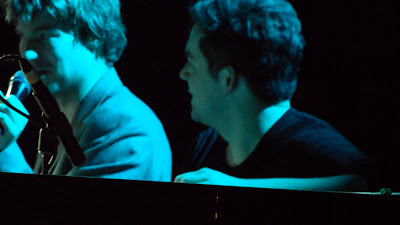 Everyone who was in the show came on stage for the grand finale, "Dreams." Bartlett started the song with his whispered vocals and then handed vocals over to Nora Jones. Everyone else on stage sang during the chorus.  The final song had that warm fuzzy homespun feeling with performers arm in arm or holding hands. Since they turned around, during the last song, I was even able to get a picture of Justin Bond and Martha Wainwright in profile. 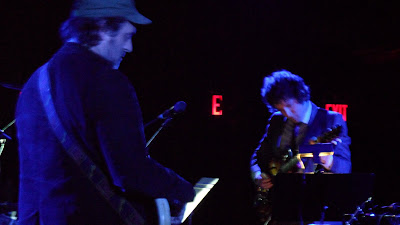 Dovenman's monthly shows at Le Poisson Rouge are definitely worth checking out for the variety of music as well as for the caliber of guest performers. From what I have read Doveman aka Thomas Bartlett has worked with a lot of great musicians and songwriters, so you never know who's going to show up. 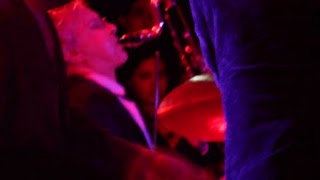