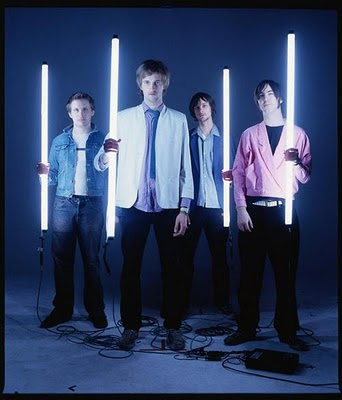 When I arrived at Terminal 5 and positioned myself on the 3rd level, the first thing I noticed was that there were lots of lights on stage.  I took this into account because it meant that my smartphone was going take lousier pictures than usual.  (Hopefully my next concert's pics will be something to look forward to because I have since bought a new digital camera with a zoom.) 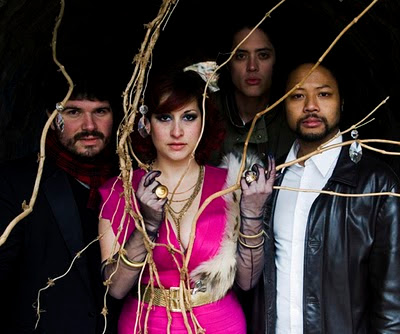 At 8:05, the musicians in Midnight Magic walked on stage and started playing the first song "What the Eyes Don't See."  Once they were in place and playing the song, Midnight Magic's Disco Diva vocalist Tiffany Roth strutted on stage, gracing the audience with her effervescent glow. Roth was wearing a black sequined dress which looked red underneath the lighting.(I thought both her hair and dress were actually red until I looked at the pictures on the Brooklyn Vegan website).

I loved Midnight Magic basically because, as I was watching them on Wednesday night, I was having my own little disco flashback to 1975. Midnight Magic captures the essence of all those early Disco bands that made dance records when there were no drum machines or synthesizers playing horn parts. They reminded me of bands like Crown Heights Affair ("Dreamin A Dream"), The Fatback Band ("The Spanish Hustle"),The Bob Crew Generation ("Street Talk")and early Rufus (featuring Chaka Khan "Once You Get Started"). I can even include Earth, Wind and Fire as well as KC and the Sunshine  Band. 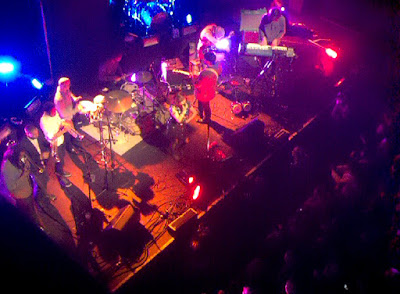 Midnight Magic bill themselves on their MySpace webpage as Disco House which I think is a good description. But with the exception of the Azair and Ill cover of "Reckless," I was getting more Disco than House. Bassist W.Andrew Raposo played some classic bass lines that would have made the Brother Johnson's (I'll Be Good To You") proud - not to mention A Taste Honey (Boogie Oogie Oogie) or Sylvester ("Disco Heat").

Tiffany Roth had a no-nonsense attitude on stage.  She often said funny things between songs like "give me some love - don't look at me like that - I'm giving you 120 percent!" Before the song "Heat" she asked -no- more like told the audience "Are you ready for this shit?" It was around the song "Drop Me A Line" that I noticed Miss Roth wasn't wearing any shoes. After the song "Superman," Roth said "That was a cover by Celi Bee & the Buzzy Bunch - look it up!"   Midnight Magic did a really wonderful version of the song which included a trombone solo by Jason Disu.

When Midnight Magic ended their set, I was still wishing for more.  I didn't really realize that the last song was an original, I also thought it was a cover.  But that is usually a sign of a good song, it sounds like something you think you have heard before but you can't think of when or where.  I hoping to see Midnight Magic again, I hope they will be as memorable and as joyfully surprising as they were for me Wednesday night. 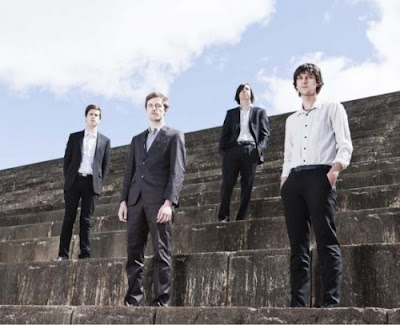 From the time I arrived at T5, I wondered what the big rectangular box was in the middle of the stage. When the lights went down and "Visions" began to play, I got my answer.  For the opening of the show it was a door that the band walked through. Later on, it became a screen that showed clouds and a collage of images.   I suspect that what we were looking at was actually a large LCD panel.

Dan Whitford clapped his hands and danced in place two feet behind his keyboard before actually playing it during "Visions."  The audience cheered once the band went directly into the music for "Nobody Lost, Nobody Found," during which Whitford consistantly held the mic with one hand while emoting with the other.  From where I stood, I could only see three musicians until I realized that bassist Ben Browning was out of sight range.  Both Browning and drummer Mitchell Scott were upstage on platforms. Whitford and the ultra playful guitarist, Tim Hoey were in front close to the stage edge. 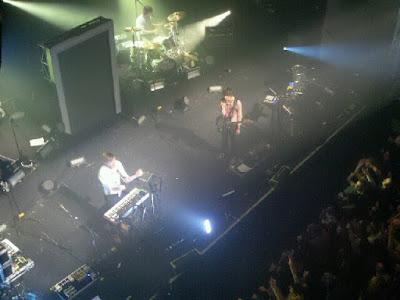 Whitford spoke to the crowd before the third song and said "we're back again because I guess you guys like us."  He was making reference to the fact that they had played two shows earlier in the week and now were playing another.  As I was looking up information before the show, I read that the boys  had played up and down the east coast, every night prior to Wednesday nights repeat performance.  For the song "Where I'm Going" an additional drummer for the tour, Mirko Vogel showed up to play the toms that were to the left Tim Hoey while Whitford changed over to guitar.  The song is one of my favorites for it's sort of Beach Boys feel.  Whenever the "yea!" shouts were done during the song, white flood lights strobed in unison. 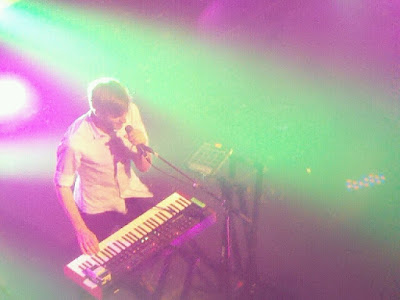 For most to of the show, Tim Hoey was out of control in a very good way.  Hoey was not only part of the music but he was part of the visual that made Cut Copy's set a lot of fun.  There were many songs where Hoey seemed like a little boy playing with his toys whichever way he saw fit.  I started to pick up on this when he played the guitar part for "So Haunted."  He did rock-n-roll stances along with Whitford and then held the guitar above his head as he walked around his side of the stage.  When Hoey got to the part of the song where he traded the guitar for a tambourine, he eventually stood on Scott's drum kit and crashed on the cymbals with tambourine in hand. 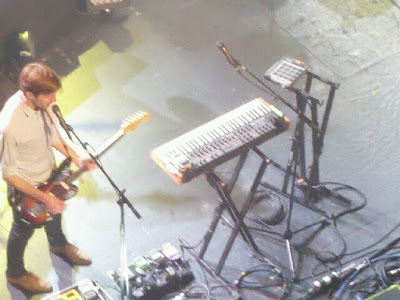 "Corner of the sky" began with Whitford playing what looked like a moog on one his side of the stage, while Scott, Hoey and Vogel all played drums on the other.  The moog part eventually got looped and Whitford went center stage to sing the song.   Once the song ended, the stage went dark but didn't come up until the music for "Lights and Music" started. At that point, Ben Browning played guitar instead of bass and came off his platform to stand downstage to the right of Whitford.  During "Lights and Music" I noticed there was a lit panel around the door that kept changing color. It was another thing to look at but it wasn't that interesting. 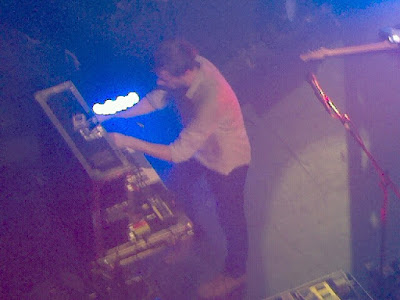 Whitford made a little speech about how Cut Copy weren't nearly as good musicians as Midnight Magic. As Whitford was talking, Hoey did his bad little boy routine by strumming some corny sounding chords on his guitar. Whitford gestured toward him and said something like "this is what I mean about not as good." Cut Copy then played the song "Take Me Over." 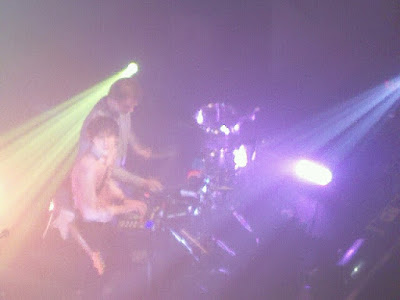 During "Pharaohs & Pyramids" what looked like a door for the first half of the show turned into an LCD screen showing sky filled clouds.  At different points during the show each band member with exception of Scott played a rhythm part on a sampler.  During the song, it was Brownings turn to play the sampler to the left of Whitford's keyboard.  Hoey got to play percussion again this time with shakers then cowbells. "Pharaohs & Pyramids" went into "Saturdays."   The audience went wild once Whitford motivated them to dance by saying "Let's do this!"   From the 3rd level, I looked down at the floor to see a sea of people dancing in place by jumping up and down.  Whitfords call to arms and the heavy house bass didn't hurt the dance momentum. 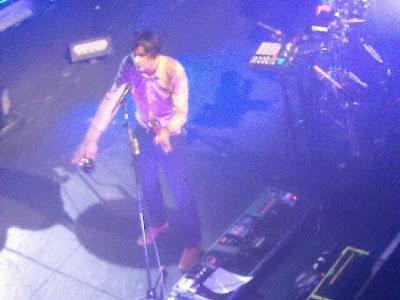 The music didn't stop because Cut Copy went straight from "Saturdays" into "Hearts on Fire."   As Whitford sang the song using his usual hand gestures, Browning used hand gestures along with him.  The crowd was loving the song and singing along.  At one of the points where the song pauses, Hoey spoke for what I think was the first time and said "I want everyone in this fuckin' place to dance like crazy "  The audience didn't get too crazy, it was a Wednesday night with two days left to the work week, therefore, they felt a little subdued. 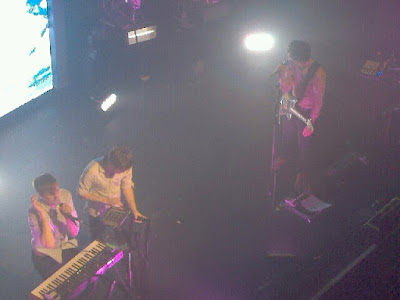 Cut Copy ended their set with "Sun God." As a band, it felt like they gave their all for the show and they did equally as much for the last song. For part of the song, Hoey played steel drum sounds on the sampling machine.  At the same point, the LCD panel started showing funky patterns.  Then Whitford did the talking part of the song with his guitar on his back as he danced around stage. After that the song went into disintegration - it went from a "Dark Side of the Moon" place to a Gorgio Moroder dance place and then to eventual noise with grinding guitars and weird sounds coming out of the keyboards. Hoey held his guitar in the air, dragged it across the stage and played it with a drumstick. As the synthetic noises died down Cut Copy said goodnight and walked off stage. 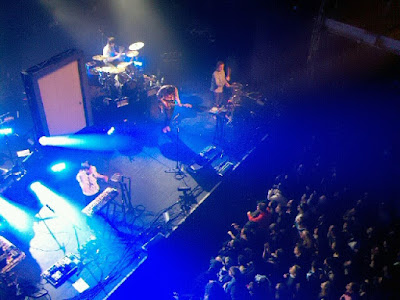 When Cut Copy came back to perform the encore, I thought they would come back through the door but this time they walked around it.  As Whitford danced, Hoey and Browning seemed to play the intro rhythms on their samplers for quite a while before actually playing "Need Your Now."   At one point, Hoey said "This is your last chance to slow dance."  Hoey eventually got back on guitar as Whitford got behind his keyboard and the audience sang along with song's chorus.

For all the energy that Cut Copy generated, the audience response was kind of weak.  The did get excited when "Out There On the Ice" started and Whitford said "Alright New York This is the end of the set, if we don't go crazy we'll never go crazy."  The crowd got crazy for two minutes than teetered out.  I watched some of the videos of Cut Copy's previous 2 shows on YouTube.  For those shows, the audience was definitely more alive.  From what I could tell the band and the audience were feeding each other but on Wednesday night Cut Copy was feedin' though the audience wasn't eatin'. I guess the hard core fans didn't wait till last minute to get tickets. 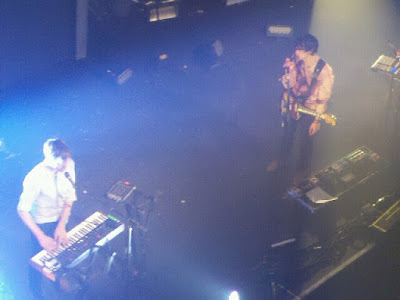 I loved Cut Copy.  They were completely fun and really energetic.  What I got from them wasn't deep, it was just the feeling of wanting to guarantee that the audience had a good time.  But there's one more thing before I end this piece.  I heard some audience members say on the way out, that Cut Copy's set was too short. Personally, I think it was just the right length.  I love many of the Indie bands I have seen during the past 60 or so shows. BUT many of them don't get the concept of leaving the audience wanting more, in other words they don't get that less is more and when to get the fuck off stage. Fortunately, Cut Copy do get it.  They may not think they're as good musicians as Midnight Magic but they are definitely excellent showmen.