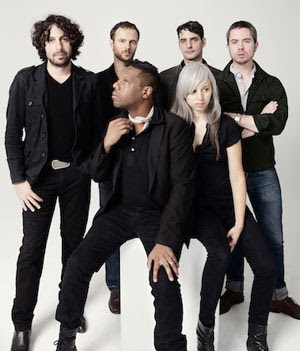 I arrived at Music Hall of Williamsburg at about 7:45 expecting that the downstairs bar would be open and the doors to the main room would open at 8.  Unfortunately, everything was running late and MHOW had people wait outside until about 8:15.  At 8, a handwritten sign was put up in the box office window showing that each band would go on at a later time.  Each band actually went on ten minutes later than the sign indicated.

As I waited, both outside and downstairs, I started to realize there weren't many people around and that the show was going to have a small audience.  I'm pretty sure the low attendance had less to do with The Dears and more to do with who was in town. Sometimes it's just the luck of the draw.  LCD Soundsystem was doing 2 farewell shows at Terminal 5 and 1 show at Madison Square Garden; The Strokes were doing 1 show at MSG on Friday and The Mountain Goats were doing 2 nights at the Bowery Ballroom.  All the shows I just mentioned were sold out. 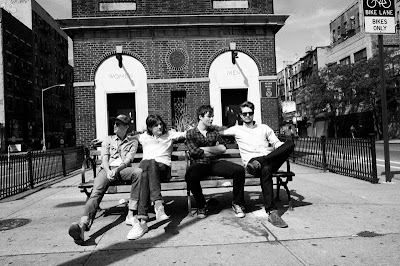 The Rassle walked on stage at 9:05 with faces that said let's get this over with.  At that point, there were about 10 to15 people scattered around the large room.  However, as they played through their set, a small crowd assembled in front of the stage. (Some patrons must heard the show starting and came upstairs from the bar.)  To The Rassle's credit, once they started playing they seemed totally into it and performed a really good set. 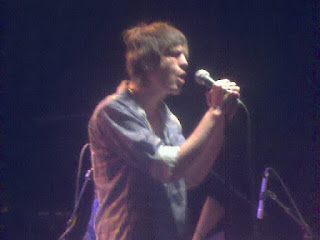 The Rassle are a fairly new band formed from members of other New York bands.  My first impression of them was that they looked like a garage band but sounded like The Ramones meet MGMT.  I think the songs The Rassle performed reminded me more of The Ramones, and Blair Van Nort's vocals reminded me a little of Andrew Vanwyngarden.

The Rassle started their first song with prerecorded choral and organ keyboard patches. Then drummer Erik Ratensperger brought the band in with some hits on his toms.  It's funny, a couple I was speaking to after the bands set said that The Razzle had elements of The Clash in their music. I didn't think so at the time but now that I listen to that first song "The Wild Ones," it reminds me of "I Fought the Law," which was also recorded by The Clash. 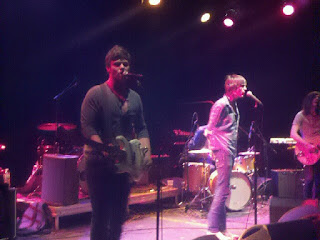 The next song, "Full Speed Ahead" had a shuffle beat and a sing along feel to it.  It also had some nice background harmony done by guitarist, Mark Solomich and Reed Van Nort. After the song Solomich said "You guys are nice and polite," he then added "I mean that as a compliment." I think he might of thought the audience took it as sarcasm but I don't think anyone heard it that way.

The Rassle performed 3 new songs: "Never On Sunday," "Grenada" and "First Degree Burn" which they are working on in the studio.  Before doing the song "Born Free," Blair turned to Erik and said " how's that working out for you?"   Blair told the audience that Erik had a temper tantrum during rehearsal because he didn't like where his drum kit was stationed. (Stage left behind guitarist Reed Van Nort). I thought it was kind of weird to tell an audience but maybe it was an inside joke and/or dig. 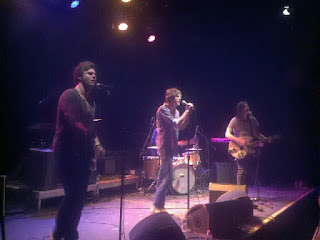 The Rassle ended their rockin' set with "Celebrate the Days" which has the word "hallelujah" in the refrain.  The same couple, who made The Clash comment, asked me if thought the band was Christian Music - Hmmm..(scratch my head)... I don't think so!  I'll just go with good music.  You can download a great 4 song EP of The Rassle by going to their web page http://therassle.com/ 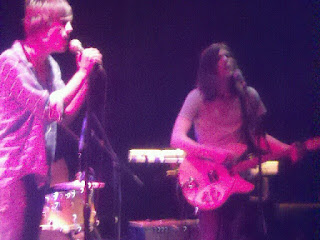 During the past several months, it hasn't always been easy to get information about different bands.  I have been able to get information about most bands but there have been times when I just had to basically accept that I was going to remain in the dark.   So what do I know about Rewards?  I know that it's basically one guy, Aaron Pfenning who first gained public attention as co-founder of the band.Chairlift.  I stated "basically" because Rewards, is made up of whomever Pfenning is working with for the time he is working with them. (Sounds like a playa to me!) Last year, Pfenning was backed by and/or working with We Are Scientists.  However on Tuesday night, Rewards consisted of the band members I listed below.* 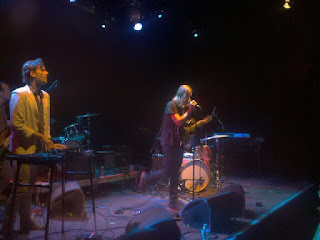 Rewards make reverb drenched atmospheric music.  Their set gave me that sort of peaceful empty headed feeling one gets from smoking pot.  Even when the drumbeats were heavy and the guitar was grinding, a numbing Zen feeling remained in the music.  Vocally Pfenning sang in a low chest voice underneath the music but there was one song out of his seven where he threw in a little falsetto.  Most of the time, Pfenning's sexy minimalist vocals seemed like he was channeling Serge Gainsbourg talking to a lover in bed ( That statement reads like a Chinese fortune cookie). 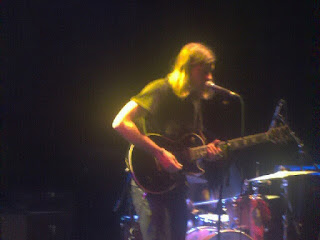 Since I didn't see a set list to grab off the stage and Rewards hasn't released any recorded songs except two, I am unable to post a set list.  I can tell you that they performed "Two Cardinals" for their 3rd song and "I Used to" which segued into the last song of their set. Oddly "I Used to" reminds me of New Order which I attribute to the mechanical sounding drums.  Both "Two Cardinals" and "I Used to" can be found on the Rewards' MySpace page. 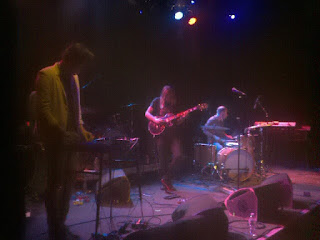 Most of Rewards' music has a late 80's early 90s feel to it that I really love.  Before Rewards started their set, I thought - this is going to be really pretentious or really good.  Luckily it was the latter.  I would like see Rewards again once they have a full CD worth of recording and I can immerse myself in their music. 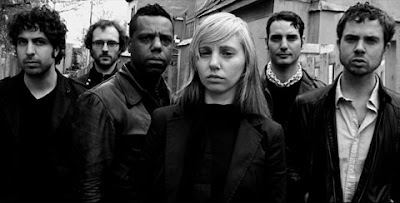 At 10:42 the lights went down and Elvis Presley's "Love Me Tender" played on the sound system.  The Dears walked on stage toward the end of the song.  Before going into "Omega Dog" and picking up his tambourine, Murray Lightburn toasted to the audience with his plastic cup.  "Omega Dog" reminded me of early Seal.  Lightburn went into a part of the song where he did solo musical strum which then turned into the band doing a 3 minute tag.  Patrick Krief did some solo riffing  until Lightburn came back in with a vocal to end the song. My immediate thought was that song felt kind of epic for the top of a set. 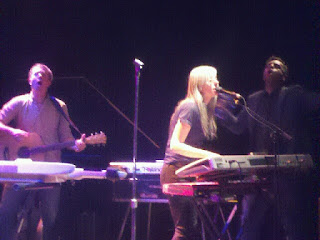 The Dears performed the very early Elvis Costello sounding "5 Chords " and then the very Black Sabbath sounding "Blood."  As I listened to that third song, I could almost imagine Ozzy Osbourne and Lightburn doing a duet.  The Dears 4 opening songs with the 4th being "Thrones" were the same 4 opening songs as on The Dears newest album Degeneration Street.  Lightburn played a white keytar for "Thrones" which ironically had a very 80's feel to it. (Keytar's always seemed so hokey in the 80's but nowadays not so much; they're more accepted). 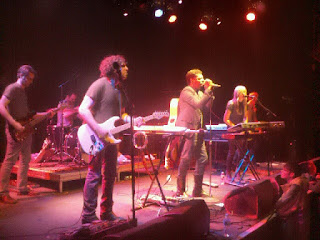 Lightburn introduced "Whites Only Party" by stating  "This is one of my favorites - it has a personal meaning for a guy like me - you know I love you guys right?"  I loved the intriguing theme played by Roberto Arquilla on bass along with Lightburns vocals. The 2/4 feel made the song stick out among The Dears other material.
Although The Dears are not well known in this country, they have been around for more than ten years and are well known in Canada (They're from Montreal). Lightburn is fully aware that there are many hard core Dears fans in the states that have been following the band for quite awhile.  Therefore, he refers to his older material as this is a "classic" or "an ultra-classic" which is how he referred to "Crisis 1 & 2."  The song was started and partially sung by Lightburn's band mate and wife Natalia Yanchak. 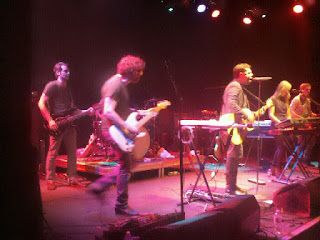 The song "Hate Then Love" had an interesting ending which slowed down to a crawl before stopping.  It was followed by "Lost In The Plot" which sounded very much like The Cure, it even felt as if Lightburn was affecting a British accent on his vocals.  Lightburn pulled out a melodica for the ballad "What We Want," which was a nice change of pace from the faster material.  Though the audience was small, as I mentioned earlier, they did manage to sing along with the repetition of the lyric "We won't ever be what we want" at the end of the song. 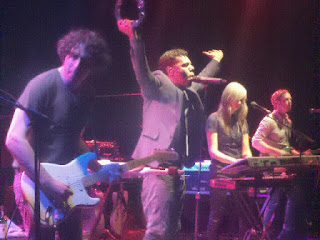 I enjoyed "Yesteryear" and it felt like a good pop song to play after a ballad.  Just as The Dears opened the set with 4 songs from their current CD, they closed the set with the last two songs from that very same CD. Playing  first "1854" then the title cut of their CD "Degeneration Street,"  both songs felt a little too epic to follow each other but the audience didn't seem to mind.  At the end of the last song, the band walked off leaving Natalia Yanchak playing single chimes sounding notes on her keyboard before gesturing prayer hands and saying goodnight. 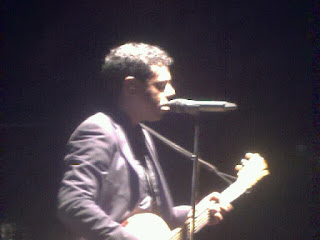 For the encore, Murray Lightburn returned by himself with acoustic guitar in hand.  Before talking into the microphone he looked at the photographer taking a picture of him and said "You must be bored as hell."  I'm still trying to figure out why he said that to her and I bet she is too.

Lightburn then had a heart to heart talk with "Billyburg" which is how he referred to the audience for most of the show.  The little speech went like this - "It's surreal that it's my job and I come out and play for you Motherfuckers ...we all have our gig (in life) and it's amazing that you guys are here and I want to thank you from the bottom of my heart."  He then set up the song by saying  "This is a classic song ...it's a true story ....because I was in love with Natalia and she wasn't in love with me."   He went on to say that was many years ago and now she's the mother of his child etc., etc., etc,  He then played the sweet acoustic ballad "The Second Part."  The band walked on stage and joined him toward the end of the song. 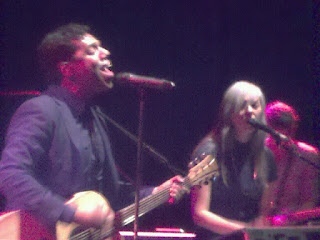 The Dears did 3 more songs ending with "22: The Death Of All Romance."  The band finished their long jam ending by doing hits (not cocaine).  They did the stop and go repetition of one note thing on their instruments to give the song a grand finale.  Murray Lightburn jumped as he did one of the hits and hurt his leg. Unfortunately, he had to be walked off stage holding on to one of the sound men for support. 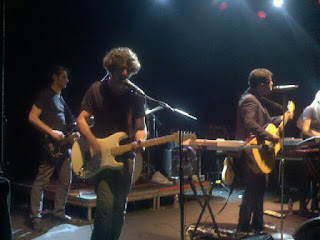 All the word of mouth I heard about The Dears was really good and I can see why, they are great band. With regard to front man and founder Murray Lightburn,  I could see he is a great voice, a seasoned performer and is very comfortable in front of an audience.  But with all that said, I was disappointed.  After awhile The Dears set felt like an endless jam session.   Too many songs seemed to have extended guitar solos.  Even when Lightburn did an acoustic song, the band joined in and jammed it out! For my taste, Krief had way too many solos which would have been more effective had they been used sparingly.

The Dears have great songs but I would have appreciated their entire set more if not every song was at full intensity.

Email ThisBlogThis!Share to TwitterShare to FacebookShare to Pinterest
Labels: All Postings, The Dears/ The Rassle / Rewards