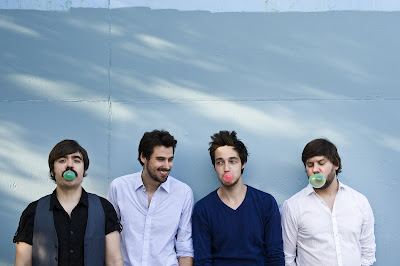 It was 70 degrees in New York City on Friday night, which truly felt like a sign that spring was on its way. Aside from the weather there was a low hanging full moon in the sky which everyone noticed, including members of Winter Gloves.  As my friend and I were waiting outside of Mercury Lounge, Charles F.was taking pictures of the moon with his digital camera while Nico Ormiston seemed to be giving him directions. Hmmm...Winter Gloves taking pictures of the moon ....sounds kind of poetic.
There was a reasonable yet small turn out for both bands on Friday night.  It looked like there were no more than 50 people in the audience for both bands.  I thought there would be more people because both bands are really good and warrant a large crowd.  But maybe I've been fooled by places like the Bowery Ballroom and Music Hall of Williamsburg which generally draw a late night crowd and have 3 bands on the bill. 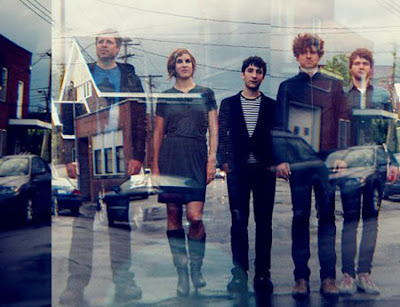 At 8PM, a slide show that was to be Young Galaxy's backdrop began being projected onto a white cloth that was hung on the back stage wall.  Two minutes later, the stage lights dimmed and 5 people walked through the small crowd to the stage looking like they were dressed in white.  They were actually dressed in light colored clothing but the room was too dark to really see. 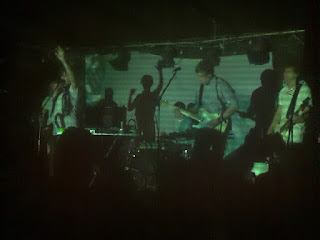 The 5 people, which included a very pregnant Catherine McCandless, were of course Young Galaxy making there way to the stage. When I stated "one of them looks like she's got something in the oven," my friend Jan let me know I was being crass by asking me if I thought it was a pizza. In January, I saw Charlotte Martin, who was also about 6 or 7 months pregnant. I think both woman deserve credit for  performing through their pregnancies. Touring isn't easy and I'm sure being pregnant isn't easy either. If audience members sometimes get surprised, I think it's because we might be expecting artists to walk out on stage looking like their press pictures. 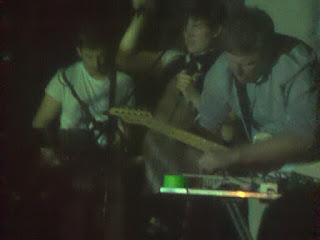 Once the band was on stage, it took a minute or two to get started.  Stephen Ramsay seemed to be fiddling with something on the table that was filled with effects gadgets. After what felt like a tentative start, Young Galaxy performed "For Dear Life."   McCandless, had a chorus effect on her voice which actually reproduced the effect on the recording.   The song seemed to go well but Ramsey still had this look on his face like something on the table in front of him wasn't working. 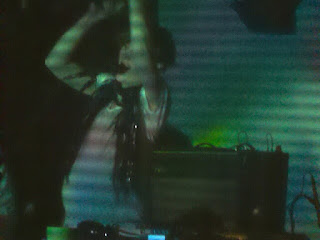 After a short pause, Andrea Silver started the slow steady beat which included frequently hitting his cymbals for the intro of "Blown Minded."  Together with Stephen Kemp's thumping bass, Silver's drums seemed to carry the song, as keyboard and guitar parts felt like they were floating over it. Cutting through an ambient wall of sound were McCandless' vocals which had the same wonderful qualities as on Young Galaxy's recordings. The timbre of McCandless' voice reminds me of Ké with the full resonance of Grace Slick. (Ké known for the song "Strange World" recorded in 1996. )


Young Galaxy had a wonderful set but I got the impression they were feeling out of sorts.   Before the song "Phantom,"  Ramsay spoke to the audience and said "We are Young Galaxy from Montreal; we're glad you're all here.  We love the Mercury Lounge and (pause)....that's it!"  Later, toward the end of the set he jokingly said "Sorry, we all took mescaline before we came on stage." 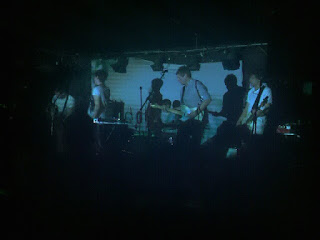 The only song in Young Galaxy's set that was not from their most current CD, Shapeshifting but from their earlier CD Invisible Republic, was "Animal Kingdom."   I was unfamiliar with the song but my friend Jan was loving it.  The following song, "Cover Your Tracks," was sung by Ramsay.  Though it is a completely different song, it strangely has a lyrical melody that partially reminds me of Hearts "Magic Man." 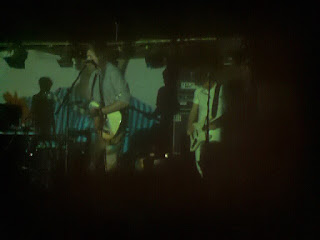 The last three songs of the evening were those songs I hoped they would play.  I have to say "Peripheral Vision" and "B.S.E".are my favorite songs on Shapeshifting.  After their set, I spoke to Catherine McCandless, who explained that her child was due late spring.  She said the band would be taking off for the summer and would be back in the fall.  I'm looking forward to it.
Young Galaxy Set List
1. For Dear Life
2. Blown Minded
3. Phantoms
4. Queen Dream
5. Cover Your Tracks
6. Peripheral Visionaries
7. We Have Everything
8. B.S.E. 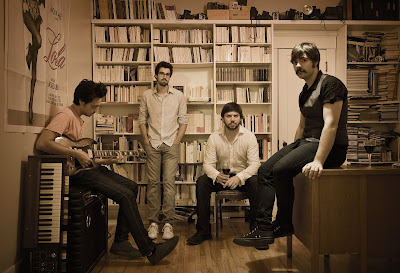 Friday night was the second time seeing Winter Gloves, only this time it felt like a more organic setting. There was something about their performance that felt a little more up close and personal than when I saw them at Bowery Ballroom in October.  Don't get me wrong they kicked ass the first time I saw them, but on Friday they seemed a little more varied in terms of the songs they played. 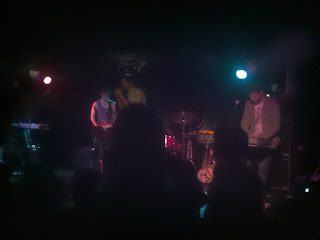 Winter Gloves first song, "Your Pale Skin" took me by surprise because it began with a guitar part that sounded like traveling music. Than Charles F. started singing and the melody sounded to me like something Chris Martin from Coldplay would write.  It wasn't until the fast backbeat on the drums and the quirky keyboard part came in that I got a feel for the entire song.


Winter Gloves moved through the song "About the Girl" and "Invisible" with incredible energy. For both songs, Charles F danced around with tambourine in hand.  But this time around,  towards the end of "Invisible," F didn't play a Wurlitzer part with his foot. 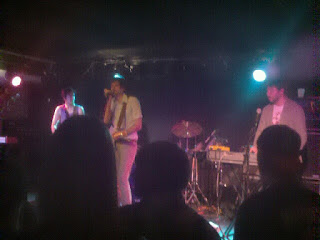 F announced the next song  "Dancing my Heart Out" as being from the bands new EP "Heart Out."  As with the first song, which is also on the EP, the music seemed a bit different from Winter Gloves other material. Both songs had more of a contemporary pop rock feel to them. I noticed that the keyboard parts were used more for melody than to establish a groove like in "Factories" and "Let Me Drive" which were the two songs that followed. 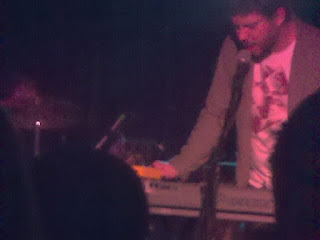 The last time I saw Winter Gloves, "Plastic Slides" seemed like a song used for a change of pace.  But this time it fit in with the newer material.  I guess the band's sound is evolving because on Friday night I realized that the feel of Winter Gloves material started changing after their CD titled About the Girl.  Their music is still very driving but since the CD All Red the music feels brighter and not as minor key sounding. 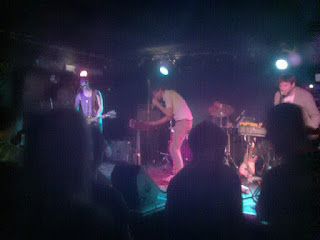 Before closing with "Ending Soon,"  F said "we have two more songs for you" but than got the sign from the back of the room to which F responded "This is our last song." Winter Gloves set zoomed by really fast.  Too fast.  I wanted to hear more but I guess that's the down side of a smaller place like Mercury Lounge.