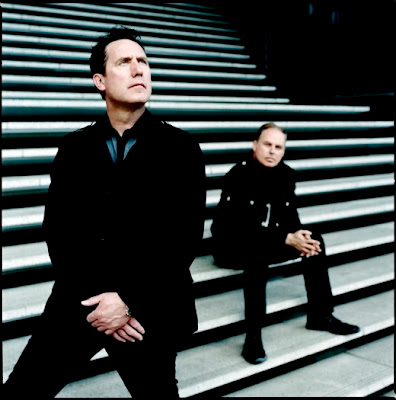 I arrived at Terminal 5 at around 7:30 and claimed a spot, from where I could watch the show, on the second balcony.  The first thing I noticed was a bunch of white balloons on strings strategically taped to the center of the stage floor.  Since I was not directly facing the stage, it took awhile before I noticed that there were lights projecting letters on the balloons spelling OH LAND. 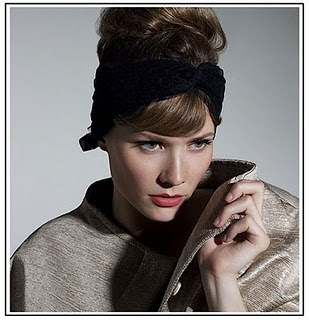 Oh Land is Nanna Øland Fabriciu, who now resides in Brooklyn but is originally from Denmark.  I at first thought, that Oh Land was another one of those solo artists who give themselves a band name.  But than I realized, that Oh Land is really a play on her middle name. 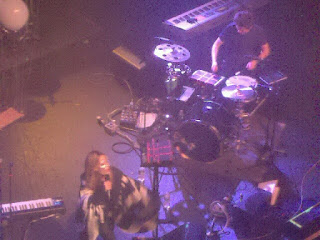 Oh Land walked on stage with her face completely painted in gold metallic make-up. She wore, what looked like, a deflated black and white striped parachute over black tights and army boots.  Oh Land's custom automatically led me to think of other Nordic artists such as Bjork or Jonsi.  And maybe even a little of Robyn as well (the boots).


Before performing her opening song, "Wolf and I,"  Oh Land grabbed the audience's attention by singing a few melody lines with a chorus effect on her voice.  She was playing the keyboard at the same point but I didn't hear any keyboard sounds, so I'm not sure if the effect came through the keyboard or just the mic. She then went into the first song with it's memorizing chorus and interesting slow kick - clap beat. 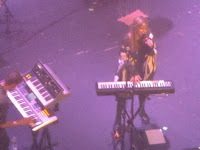 Although Oh Land, showed up on Letterman a few weeks ago. I could only find out the name of one, of her two musicians. The one being drummer Hans Hvidberg-Hansen.  I did a hardcore search for the name of her other keyboard player's name but to no avail. I believe when Oh land introduced him, at the top of her set, she said his name was Tore. That is all I know. If anyone familiar with Oh Land knows the his name, please feel free to leave a comment. (I emailed her MySpace page and Epic Records but no one answered)


Throughout the show, I thought there was a girly playfulness in Oh Land's mannerisms and light vocals. What I found really refreshing about Oh Land's pop songs were not only her catchy melodies but that each song had it's own unique feel.  In other words, each song didn't sound the same. For example, "Voodoo" was a (vocally) sexy rock song followed by "White Nights" which had a very pop melody to a shuffling beat.  I have watched Oh land perform "White Nights" on YouTube but it had more of a monumental flavor to it in concert, especially with Hansen repeatedly hitting his crash cymbal. 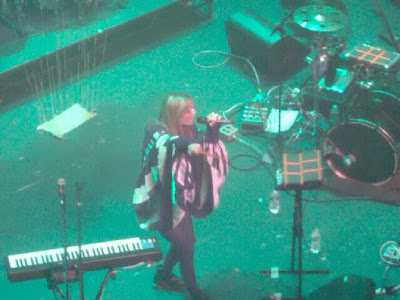 I loved all the songs in Oh Land's set but one of my two favorites was "Lean on Me."   The song's music and vocal refrain are built around a major 3rd. The descending 3rd in the music reminds me of "Goldfinger" (James Bond Theme song - music by John Barry). The refrain walks up a third step ( "Lean_ On_ Me _____, " Do Re Me). 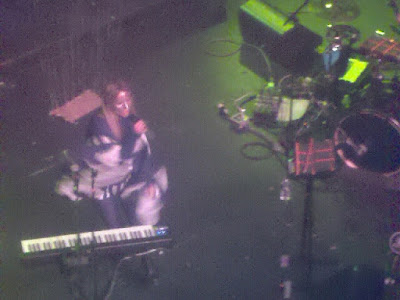 The other favorite was the closing song "We Turn It Up."  I have an image in my mind's eye of a group of hippies coming up over a mountain carrying boom boxes while singing the chorus.  The song automatically reminds me of a marching band as well,  batons included.  It has an anthemic marching quality that is complete pop.


I had a fun time watching Oh Land and singing along with some of her songs.  I look foward to seeing her headline.
Oh Land
Oh Land is
Nanna Øland Fabriciu - vocals and keyboard 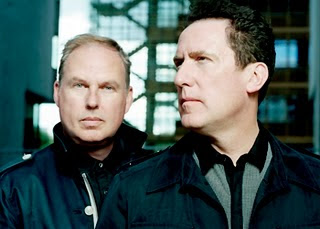 OMD (Orchestral Manoeuvers in the Dark)

When I saw The Specials, I wrote about Lynval Golding and Neville Staple being really energetic.  I was surprised at the time because I didn't expect a band from nearly 30 years ago to be so lively.  Jumping and dancing around while singing for an hour and a half is not something one would expect from men who are pushing 50 and older.  Yet OMD's Andy McCluskey did the same thing, he danced, jumped around, walked about, and played bass for the entire set.  Toward the end of the set he kept asking the audience if they were tired, but what I kept wondering was if he was asking us or himself.  It was obvious, McCluskey was having fun yet working really hard at the same time. 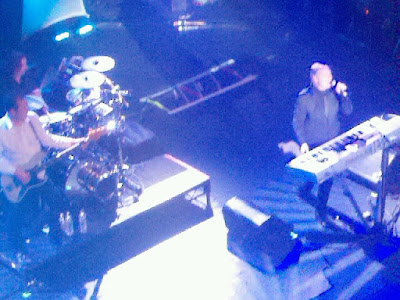 All four members that were in the original band were on stage Tuesday night.  But it was kind of weird that for all the press pictures only Andy McCluskey and Paul Humphreys are photographed.  Just as weird was that only McClusky and Humphreys had all the attention on stage.  Yes, it's understood that both gentlemen were the founding members and that each struck out on there own as OMD at different times. However it was just odd that Martin Cooper and Malcolm Holmes, who were with the band when they had their fame in the 80's are now treated as sidemen. 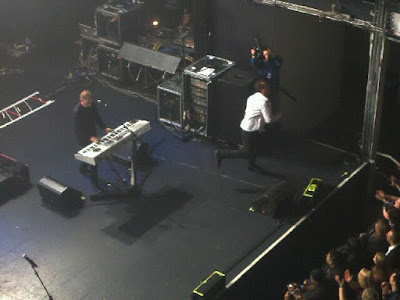 I loved the opening of the show because it was really sudden.  It seemed like within two seconds, the preshow music stopped and purple flood lights blinked on stage in sync with a boom sound in the Intro of "Modern Parts III & IV."  As the boys gathered behind their instruments on stage, the intro continued until McCluskey played the being bass strum for "New Babies and New Toys." McCluskey danced around between vocals, with bass in hand for most of the song, as Humphreys stayed stationary behind his keyboard.  After the song McCluskey said "Thank you and good evening ....you looked terrified when we started with a new song." 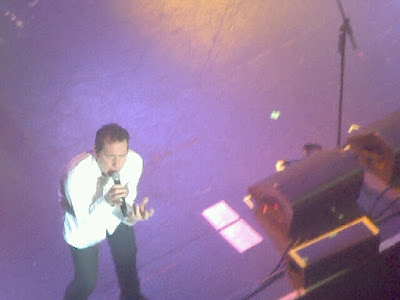 McCluskey did most of the speaking for the show. He made it clear that OMD had a history and a now, through the entire set.  Before playing "Messages," McCluskey said  "It was 31 years ago when this one climbed the charts..did you bring your dancing shows?  I don't think the entire audience remembered that song but they most certainly remembered the song that followed immediately after it.  As soon as the audience heard the music for "Tesla Girls," they cheered and then bobbed their heads with every "no, no, no!"

McClusky was unexpectly a bit of a showman and said things off the cuff like "We haven't played the states in 23 years but for those OMD officionatos, this is from Dazzle Ships." (An album which they released in 1983.)  Before singing "History of Modern (Part I)" my favorite on the new CD, McCluskey said "The good news is that I put the bass down which means I have to dance and you do too!"  After the song, he said "Paul, I think the people would like to see you over here," then McClusky and Humpreys traded places. 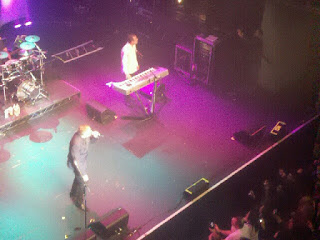 Paul Humprey's sang "(Forever) Live and Die" which is a song I remember but never associated with OMD.  I actually didn't recognize the song until it got to the lyrical climb of "I never know, I never know, I never know why, you make me want to cry."   Humprey's wasn't as lively as McClusky, he was actually smoothly sedate.  He moved along to the beat and walked from stage right to left but there weren't any big gestures.


The boys traded places again and McClusky said "We were doing great as an alternative band until we wrote this song."  When the audience heard that it was "If You Leave" they cheered and sang along. In between doing some 80's style dancing (think Madonna at Danceteria in Desperately Seeking Susan), McClusky did some jumping around.  When it came time for the sax part Martin Cooper played it as on the recording lick for lick. 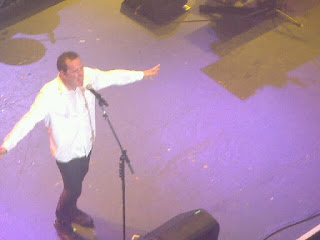 The band went back to Architecture & Morality for both versions of "Joan of Arch" and of then of course "Souvenir." In terms of the band's records OMD went back and forth which is what I found most enjoyable about their set. OMD played their hits, they played songs for the die hard fans who stuck with them through the years and they played a lot of material from the most current CD.


The new recording is great from beginning to end and has a lot of really good songs on it. One of them being "New Holy Ground" which I absolutely love. I love the fact that the song's backdrop is what sounds like someone's heels walking in tempo across a marble floor. I have to say that there's something about the very minimal arrangement that feels very Depeche Mode. When McClusky sang the song on Tuesday night, it felt like he emotionally touched the audience. They listened attentively and applauded loudly when it was over. 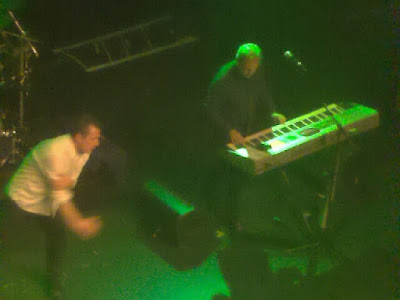 OMD followed with up with "Green" which is another one of my favorites from the New CD. Perhaps because is sounds exactly like something from the mid-eighties.  McClusky stood at the edge of the stage for some of the song before sitting down on the one of the sound monitors for "Talking Loud and Clear." There were also points during both songs when McClusky high 5'd with some of the people in front of the stage.

Some of the other show highlights were songs like "Sister  Mary Says," also from the new album.  The song is very similar in feel to "Enola Gay," which coincidently was the last song of OMD's set.  Both songs make me want to sing along, and in case you are wondering that is exactly what I did. 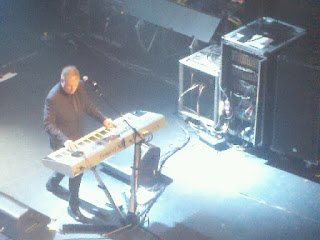 "Locomotion" is my favorite song from back in the day, so I would have gotten excited hearing the song even if they performed it badly.  Fortunately, the song was performed well and included an excellent metal drum keyboard solo by Humphreys.  Daddy (remember that's moi) boogied in the balcony.

The boys of course performed a encore and it was wonderful. "Walking on the Milky Way" has a feel good chorus. They audience responded and answered back every time McClusky got to the part "Hey, Hey!" Perhaps I was conscious of the fact that everyone in the audience was somewhere between their late 30's and early 50's, but McClusky seemed to punch the line in the lyric that said "I don't believe that anything can recreate your youth." (I would say that everyone there on Tuesday night was certainly giving it a good try!) 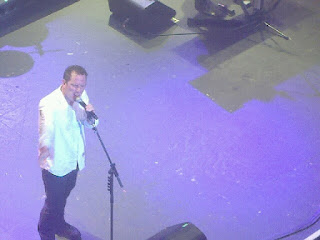 The audience cheered as soon as McClusky did the bass windup to "Electricty." It was the point where everyone danced at the end of a great show. There was point when McClusky and Humphreys smiled at each other with a we've done well kind of look. After the song ended, the band bowed and McClusky said "We will be back," several times. I'm sure they will.