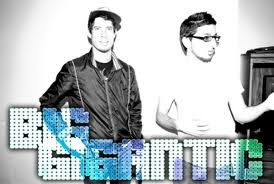 I've been interested in seeing Big Gigantic for quite awhile.  But every time they've played I've either had another commitment or it's a night of the year that I wouldn't be caught dead in a club - like New Years Eve. (BG played Mercury Lounge).  So, I was grateful for the opportunity to see them on Friday night.  It truly was a dance hall experience.
When the main room of Bowery Ballroom opened, Big Gigantic stage set was lit.  There were 9 color cubes, lit up from the inside with the color blue, stacked adjacently in the shape of two triangles. Eight of the cubes had a lighting fixture on it that threw light downstage. (When BG played those light fixtures threw light all over the place.)  There were also two panels with  lit cube designs on them, one attached to the DJ table and the other in front of the drum kit.
Unknown DJ 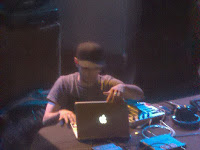 The lights belonging to Big Gigantic's set were shut off after about 20 minutes and all that remained was a light on the table.  There was a guy in a baseball cap setting up equipment on the table.  Then within a few minutes the house lights went down and the guy said "What's up Party People?"  He wasn't on the bill but apparently he was the opening DJ.  I never found out who the guy was but I did like what he played. 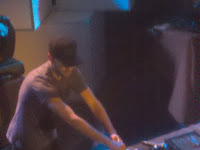 The mystery DJ mixed in some cool songs like Little Dragon's "Never,Never," giving it a completely different feel.  He had a padded controller, hooked up to his MAC laptop, which seemed to allow him to add rhythm parts as well as drum parts which he often looped. He also mixed in "Ariel" by Stateless, repeating the line "There was a fire in your house they say." 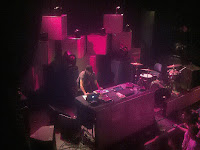 To my ears, the music the mystery DJ was playing would be classified as Drum & Bass. There were portions of the mystery DJ's set when the bass was really low and percussive. Additionally there was also a portion where the bass rumbling and the audience responded to the groove by bopping their heads. 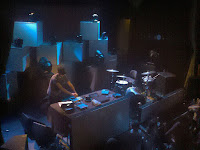 The mystery DJ ended his set by jesturing with prayer hands and bowing his head.  Immediately after his set, I started chatting with some guy from New Jersey who referred to the evenings music as Dubstep. I made like I knew what he was talking about, then came home and looked it up on wikipedia.  Here's the definition that wiki retrieved from allmusic.com: "tightly coiled productions with overwhelming bass lines and reverberant drum patterns, clipped samples, and occasional vocals". The Wiki page then goes on to say that the dubstep includes the darker elements of Drum and Bass as well as Breakbeat. 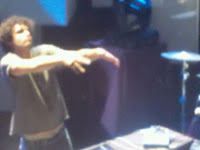 When Kraddy got behind his DJ table , the audience knew it was Kraddy beyond the shadow or a doubt.  Kraddy is hard hitting in the way he deejays to the way he dances with hand gestures as if he were commanding the audience. He started his set by saying - "What's Up New York City?"  Then waved his arms in the air.  Where the mystery DJ set a mood that was similar to hanging out in a cocktail bar, Kraddy was definitely giving a performance. Kraddy's set was as much about his persona as it was about the music he played. 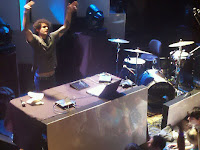 Kraddy seemed to have a little tricks in his bag which made his set more pop than underground.  Another way of saying what I mean is that he played to the crowd, with songs they knew, instead of over their heads.  Sometimes Kraddy threw in 1 phrase snippets from songs like the famous guitar riff from Deep Purple's "Smoke on the Water." 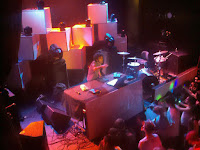 Other times Kraddy took songs like Jay Z's "Public Service Announcement (Interlude)" and gradually slowed it down to a crawl. Once he got Jay Z's song to the speed he wanted, Kraddy then added a wobbly bassline and a wip cracking beat. The song seemed to break down to a stop and then Kraddy brought the beat back in, only this time the song was Rick Ross "Everyday I'm Hustlin." It was funny to see everyone on the floor bopping their heads to the slow steady beat. 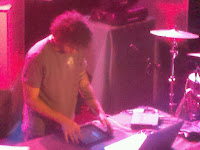 The set really went Dubstep when the Kraddy played a recording having a heavy bass line with a sort of krunchie high pitched synthesizer sound playing the theme.  I know I've heard the recording before but can't remember where or by whom.  Kraddy continued his set by adding in well know hip-hop songs like  "I Got 5 on It" by the duo Luniz, where upon he raised his hand in the air and said "Put Your 5 Up New York." 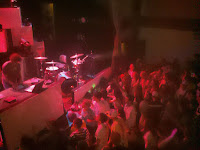 Before ending his set, Kraddy mixed "Bombs Over Bagdad" by OUTKAST but he slowed it down to midtempo and the meter felt more like 2/4 instead of 4/4. Kraddy then played "Kryptonite" by  Purple Ribbon Alstars featuring Bib Boi, a remix of his own track "Android" and a short portion of Passion Pit's "Sleepyhead." 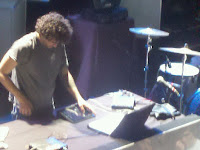 For his encore Kraddy said "Alright New York, I got one more track left for you all" He then played another beat slammin' instrumental as his last mix. I think part of the last mix included "Raise Your Weapon" by Deadmau5, but since I'm not totally familiar with the world of electronic music I wouldn't quote me. Once he ended Kraddy handed out stickers to his audience and threw a few toward the back. 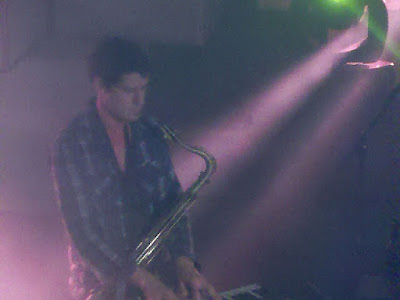 On my way to Bowery Ballroom, I thought I would be home by 12:30 since there was only two acts on the bill.  WRONG!  Smoke for theatrical effect started to blow on stage at around 11:48 but Big Gigantic did not start their set until 12:10.  BG ended  their set at 1:53 AM, truly past Daddy's (that would be me) bedtime. The set started with Dominic Lalli standing next to his keyboard, holding his tenor sax and saying "People What Up?  We are from Boulder, Colorado" 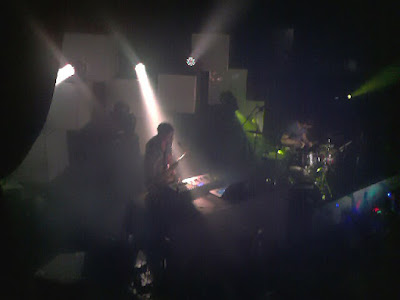 Big Gigantic started off with their remix of the song "Ares" by a producer who goes under the name Emancipator. The remix stays true to the original even though the production between the two is like night and day. There's a theme on the original that is played very legato by violins but is broken up into phrases played by Lalli on sax in unison with a prerecorded synth line.  The dirty krunchy synth sound (nope! I don't know exactly how to describ it) matched a lot of the tracks Kraddy played prior to BG's set. 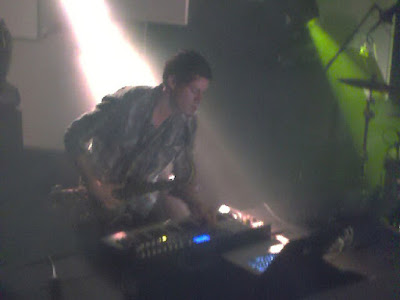 Big Gigantic did quite a few remixes/meshups of some current hip hip material.  The first remix was of a song on newest Eminem CD but I don't recall which song.  At that point, I was actually listening to drummer Jeremy Salken play off of Eminem's rap.  In other words, Salken wasn't playing a supporting beat, it was more like Salken was responding to Eminem's rap as drummers often do with live vocalists. 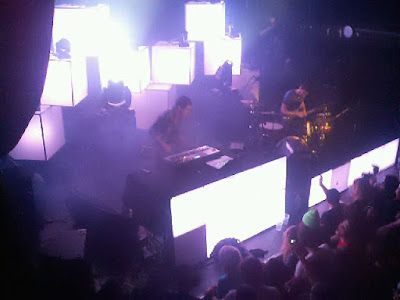 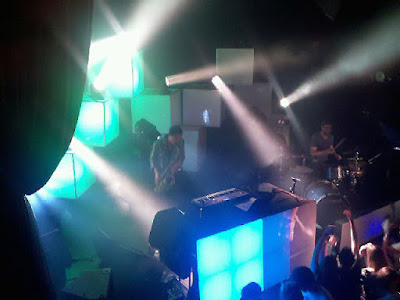 The remixes kept on coming as did a remix of a remix.  I'm referring to "The Opposite of Adults" by Chitty Bang which is a hip hop remix song of MGMT's "Kids." For as many remixes that I picked up on, there were as many that went right over my head.  For example, there was a jammie that kept coming round with the line "Don't Fuck with Me."  I couldn't tell if BG was doing a remix or if they sampled a line from a movie. (Feel free to leave a comment.) Toward the end of the show the audience went wild when they heard piano part to Aloe Blacc's  "I Need A Dollar" which I believe is one BG's most well known remixes. 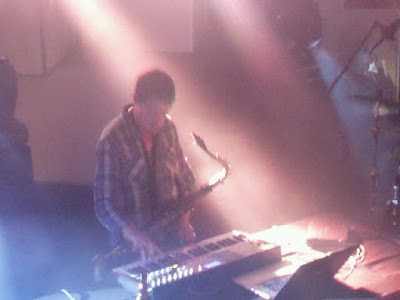 There were lots of lights twirling around the room and songs overlapping into or over each other.  Big Gigantic did a lot of their own songs between remixed stuff but it was hard to keep track of which song they were doing at any given point in the show. Sometimes Lalli announced the songs as he did with the "High and Rising" off of the newest CD A Place Behind the Moon.  Other times Lalli would introduce songs in the form of a pon. For "Wide Awake," which BG performed after midnight, Lalli said "New York City make some noise if your wide awake." 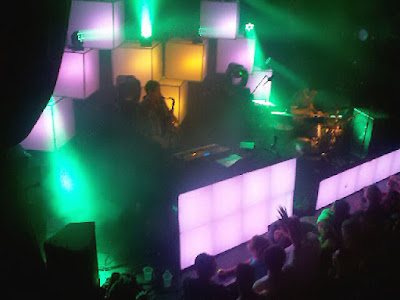 Lalli reminded me of early disco deejays who used to have a slick voice on the mic.  He reminded me of a deejay in club I used to go to during the disco era.  The dj would say cheesy things like "You know what it is to find her, now find out what it is to keep her. Huh!" He would then play songs like "The Love I Lost" or "Love to Love You Baby" (Harold Melvin & the Blue Notes, Donna Summer.) 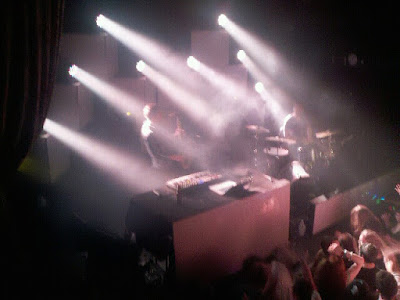 Big Gigantic's music can fall under a lot of headings from Dubstep to Acid Jazz to Electronica. But whatever you call it, it's still music which guarantees a party. By the end of the evening, instead of feeling like I went to see a band, it felt as if I had been out dancing. Though I was feeling pretty tired by evenings end, I walked home with Lalli's sax still playing in my head. My clubbing days are long gone but the atmosphere that Big Gigantic created allowed me to do something I still love which is watching people have a really good time. Big Gigantic is more than a duo made up of Dominic Lalli and Jeremy Salkenit, it is the lights which are a spectacle,the music that keeps on pumping and the crowd that comes to party.
Posted by Frank Grimaldi

Email ThisBlogThis!Share to TwitterShare to FacebookShare to Pinterest
Labels: All Postings, Big Gigantic/Kraddy