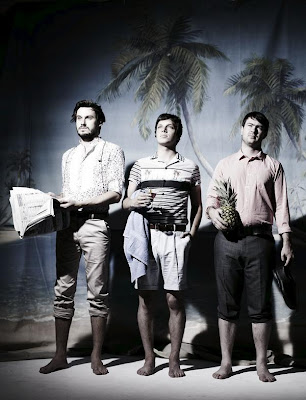 There were two shows I wanted to see last weekend, the first was Robyn and the second was Friendly Fires. I waited too long to attempt contacting the band's publicists, who sometimes but not always will give me a ticket. I wasn't sure I had the time or the money to go to both shows but I somehow managed to do just that. Fortunately, there is always someone that does not want to get stuck with a ticket and will sell it at cost the day of or before the show. I'm happy to state that both shows were fabulous and worth twice the cost of admission. 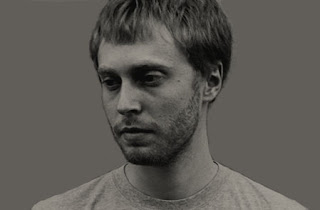 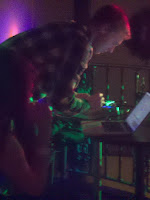 The doors to the main room at Bowery Ballroom opened up a little after 8:30  which was later than expected. When I got up to the mezzanine, the audience right side of the balcony was reserved so I ended up sitting behind Fatly DL aka Drew Lustman.  DL who deejayed before, between and after both sets, played some great House/Garage music.  I attempted to discreetly to take a few pics of him while he mixed music working from his IPOD, Mac laptop and 2 other pieces of equipment.  (Though discretion has never been my forte.) 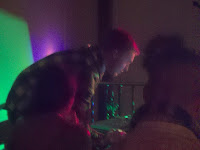 I had the most fun listening Fatly DL during the 25 minutes or so prior to The Hundred In The Hands set. Some of the music he played felt a little on fast side for House music but I'm not stating that as dance music aficionado. DL has several recordings out on Planet Mu Records which are available through their site http://www.planet.mu/artists/FaltyDL. Besides his MySpace site, a podcast of his music is available and can be heard at:
http://www.xlr8r.com/podcast/2010/05/faltydl. 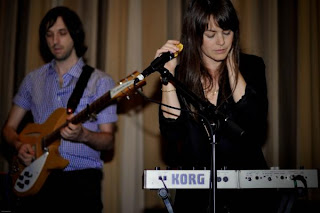 The Hundred in the Hands, a duo Eleanore Everdell and Jason Friedman, started their set at exactly 9:01PM.  The first sound I heard was shakers coming from a drum machine followed Friedman playing introductory dissonant chords before switching to bass for the song "Pigeons."   Everdell mostly sang but occasionally accompanied herself by playing chords on the synth to right of her microphone. 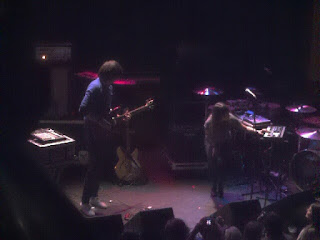 THITH (abbreviated) have been categorized as Electro-pop and their Myspace page as Disco House, pop and psychedelic. However, their music feels more to me like Muse with lighter female vocals.  I find the same of sort spacious, electronically lush and somewhat dark sound in THITH's music as I find in Muse. Though I find Eleanore Everdell's melodies to be wistful where Matthew Bellamy's are anthemic. 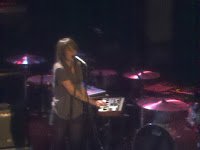 THIGH moved through  "Lovesick," with it's sixteenth note guitar downward guitar strum and lyrics which describe a little more than mild neuroses, to "Ghosts."  It's often hard to catch lyrics when there is so much reverb on a singers vocals but I did hear the line "The demons are all in collusion," which I loved. "Ghosts" had a preprogrammed bassline and drums which Friedman played over. The song's feel actually reminded me of early Cure. (Actually "Play For Today" from Seventeen Seconds Album).

Eleanore Everdell vocals and her look conveyed a cool sexiness.  Whenever  she sang, her look and stance (not her voice) reminded me of Nico from Velvet Underground.  Everdell sang front and center between playing the keyboard to her right. She often did that 60's thing of allowing her bangs to cover her eyes. 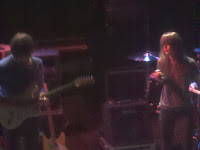 During a happier sounding song "Tom Tom," an effect was added to the sequenced drums which made them sound like a Giorgio Moroder bassline. Though the next song wasn't as percussive it also had that thumping 8th not Moroder feel.  THITH ended with "Commotion" which was my favorite, I loved the bassline and loved Everdell vocals which sounded as if she were crying.

The Hundred in the Hands six song set seemed to zoom by as did most of the evening.  I wish the evening hadn't started late because I would have loved to have heard two or three more songs. Ah well, hopefully next time they will be headlining. 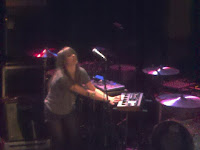 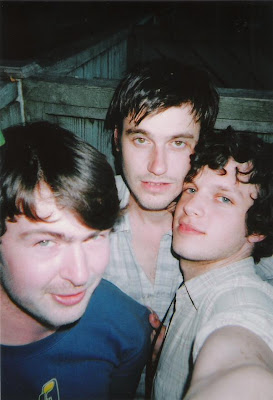 Friendly Fires set started at 10:15PM.  As the lights went down and the boys were getting into place, vocalist Ed Macfarlane jumped up and down before taking the mic out of the stand.  This is my first time seeing the band, but from what I could tell they were revved up and raring to go.  It's rare that bands open up their set with material that the audience hasn't yet heard but "Blue Cassette" with it's powerful chorus absolutely grabbed and held the audience attention. 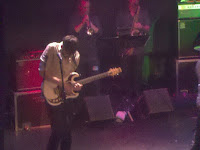 For "True Love" the Friendly Fires, and touring bassist/drummer Jack Hamson, were joined by two session musicians on sax and trumpet. (They seemed to be hired for the gig; they were reading sheet music.) "True Love" is another strong song which they have been performing since last year.  It has strong refrain with Macfarlane repeating the line "All I want - is to feel true love." The song will be included on the upcoming CD scheduled for spring release.

"On Board" was when Friendly Fires already high energy bumped up a few notches.  In the beginning of the song drummer Edd Gibson, playing an agogo, stood beside guitarist Jack Savidge.  Gibson eventually went back to his drum kit while Hamson walked forward playing a funky bassline.  In the meantime, the horns were doing lines that sounded straight off of a James Brown album. 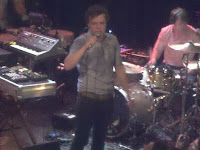 Ed Macfarlane occasionally played the keyboard or fiddled with the equipment to his right but when he wasn't singing, he was dancing his ass off. Marfarlane has a goofy way of dancing but he's so into the music, it is really sort of sexy. During the song "Running Away," Macfarlane utilized his falsetto which  he also did later on for the song "Pull Me Back To Earth." On "Running Away," Macfarlane even did some fun scatting. ("fun"- after all I'm not talking Ella Fitzgerald - more like Dean Martin.)

For the song "Chimes" the audience clapped along and for "Skeleton Boy" everyone sang along.  (I love the video for the "Skeleton Boy," it's shot in color but it is basically in black and white.)  The song that I found interesting was "Hurting."  It reminded me of Nile Rodgers (Chic) and also of the 80's English band Level 42.... maybe it was the horns. 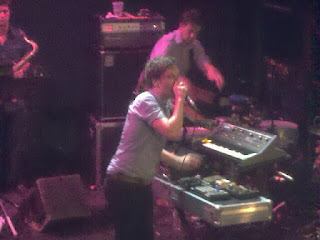 I've now been at Bowery Ballroom on several occasions when the band has the audience so excited that I can literally feel the whole room shake from people jumping up and down.  That is exactly what happened for "Jump in the Pool."  Aside from the feeling the room shake, the audience sounded like they were at a rally every time they uttered "Jump in the Pool" along with Mcfarlane. 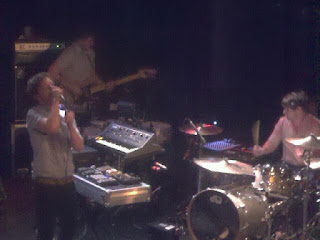 Friendly Fires did one more song from the upcoming CD before ending with "Paris." Even though "Paris" was a given, the crowd still went crazy when they heard the intro which consists of Paris street noises.  "Paris" was my introduction to Friendly Fires, it's was one of those times when a song was playing on Pandora and I had to see what it was. Friendly Fires left the stage with the equipment still resounding. The audience knew they were coming back; one stage hand was tightening the drum kit while another was tuning the guitar. 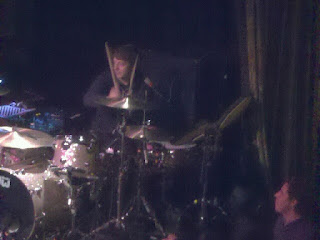 The encore was pretty cool. "Lovesick" got the crowd going again but "Kiss of Life" turned up the heat.  Along with Hamson, who was also playing drums, each member of the band had a percussion instrument in there hands. The guys ended the last song by banging on their instruments faster and faster until the final stop. The audience loved it!!

Friendly Fires will be back at Webster Hall on May 25th. I wouldn't be surprised if the show is already sold out. 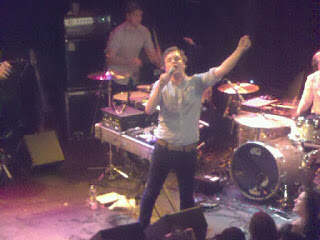 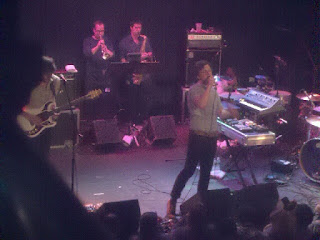 Email ThisBlogThis!Share to TwitterShare to FacebookShare to Pinterest
Labels: All Postings, Friendly Fires/ The Hundred In The Hands/ Fatly DL