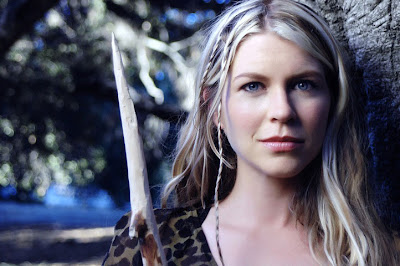 I became aware of Charlotte Martin by reading her bio on Joe's Pub online calendar. Like Keren Ann, the artist I wrote about prior to this posting, Charlotte Martin peeked my interest enough to want to see and review.  So prior to scoring two tickets for Martin's show, I acquainted myself with her music by listening to her On Your Shore and Stromata CDs.  Instantly, Martin's vocals, and the production on her recordings, reminded me of Kate Bush.  Yet there were smatterings of 90's songwriters, such as Sarah Mclachlan & Paula Cole.

On Sunday night, the first thing I picked up on was Charlotte Martin's strong fan base. Having reviewed quite a few shows at Joe's Pub, I have my favorite places to sit in the room. Unfortunately, where I wanted to sit was taken up by a large party who made reservations for both shows. I was miffed that my friend and I did not have my usual spot to view the show.  Nonetheless, I was impressed by the loyalty of Charlotte Martin's fans.   Throughout the show, much of the audience cheered after what seemed like the first bar of their most favorite songs - and there were quite a few. 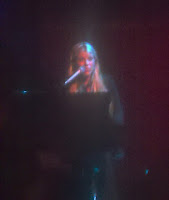 Once the lights dimmed for the 9 o'clock performance, a very pregnant and beautiful Charlotte Martin nonchalantly walked on stage. Martin was wearing all black, with Rupunzel like long flowing blonde hair that stopped at about hip length. Before playing her first song, Martin sat on her piano stool and directed whatever she said to the audience by the stage rather than the entire room.  Her relaxed entrance didn't make it feel like her  9 o'clock show had an actual beginning. Perhaps I'm being a bit too diplomatic, but I think Martin probably thought of her two shows as one with an intermission. I read she was doing two different set lists and as I previously stated some of the audience from the first show remained for the second.

Martin opened with title song from her upcoming album "Dancing with Needles,"  which didn't feel like an appropriate first song.  The piano arrangement for song was extremely rhythmic and had quite a few dissonant chords.  Paired against the tension of Martin's vocal melody, the song felt a little off putting. Unfortunately the second and third songs, "Volcano" and "In Parenthesis" felt overshadowed by the first song. I watched a Youtube video of the same performance of "Volcano" and enjoyed it so much more than when I was in the audience. For me the song, with its modal piano motif and its rhythmic build up to a sweet chorus, felt more accessible to the listener. "Volcano" may have been the better choice for a first song.

"In Parenthesis" was essentially a blues.  It was the first but not the last time that the power and ranginess of Charlotte Martin's vocals reminded me of Laura Nyro.   While playing the song's intro, Martin playfully spoke about writing the song when she was 22 on an upright piano that had a brand name she couldn't pronounce.  She then said something else about the song which she half whispered. The audience next to her laughed but the rest of us weren't close enough to be in on the joke. 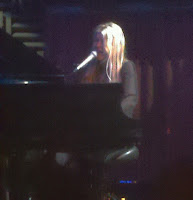 After the show, my friend Paul took the words right out of my mouth by stating that he didn't really warm up to Martin until after the third song.(It's nice when friends verbalize something I was thinking. It makes me feel less of picky critic and more like a person noticing his own common reactions to what's happening in the moment.) “Truth Cerium” seemed to be the place where Martin got her musical mojo. Vocally the song did not have as wide a range as her other material but instrumentally it showed that Martin knows how to play piano for the percussive instrument it actually is. Martin started the song with a descending funky bass line, against a trill on the upbeats in her right hand, which she intermittently returned to throughout the song. Loved  it!

I didn't recognize the Kate Bush intro with Martin's song "Galaxies." Once I posted the set list with one of the songs missing, I was informed of the title by one of Charlotte Martin's fans.  "Galaxies"  sounds  very much like an homage to Kate Bush which I think Martin subtlety makes clear by repeating the first two lines of "A Woman's Work" as a springboard.  Regardless, of the songs inspiration, It's a really wonderful song, I especially loved every time she repeated the simple line "You couldn't be anymore beautiful, right now." 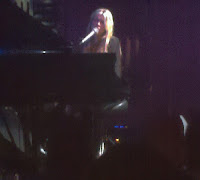 "I Am Redeemed" was another example of Martin's rhythmic piano accompaniment centered around a melodic pattern. The song had lyrical melody that reminded me of Paula Cole, but I'm only making that comparison to perhaps give the flavor or feeling of the lyrical melody. Charlotte Martin's vocal and piano style are definitely her own. Her soprano range seems to fluctuate between head and chest voice often, and with ease.

Martin introduced the next two songs by stating the first was her favorite on the record and the second as not making it on to the record.   "Tremble," the first of the two, was a bittersweet ballad.  It had a lyric that contained the memorable and awkwardly cute repetition of the expression "Uh-oh" anticipating her own feelings after having fallen for someone. "Warrior" was one of my favorite songs in the entire set.  It had a tempo that was in three, making it feel different from the rest of Martin's songs.  Before doing the song,  Martin basically told the audience that even though the song wouldn't be on the new album it would be available through her fan club, to which I'm sure many in the audience are members.

Charlotte Martin may not have started her set on a good note but she definitely ended on one with the song "Wierd Goodbye."  Before the song, Martin said how grateful she was for her fans and all the new people in the audience. (I felt acknowledged.) As part of a little closing speech Martin said "I'm certainly not Madonna but the fact that I can make music that people give a shit enough to listen to.... I didn't write out the entire statement in my notes but you get the jist. The mention of Madonna felt a little strange and self pitying.  I think Martin would have been better off by simply expressing her gratitude.  Martin is extremely talented, so I felt she was doing herself a disservice by what sounded like measuring herself against a pop star. At the moment Martin finished speaking someone in the audience screamed out "Are you pregnant?"  Martin said "on that note" and began the closing song.

Charlotte Martin got a standing ovation before her encore.  It took her a little time to come back out but she eventually did.  She performed "The Dance," which had a melody that felt like a 6/8 Irish jig.  When she sang the opening lyric someone in the audience screamed and others applauded.  The song had a clap-a-long part which the audience automatically picked up on once Martin started tapping on her microphone.  The sound person added some delay to certain parts of Martin's vocal which gave her voice an interesting ethereal quality. However, it also reminded me that I had been hearing lots of reverb on Martin's vocals throughout the show.  The reverb didn't bother me but it might have been nice to hear one song au natural without effects. Martin most certainly has a healthy set of pipes.  I was amazed that she had the vocal stamina for 2 sets while being at least 6 months pregnant.  I look forward to seeing Charlotte Martin post pregnancy in another setting or perhaps with a band.  I'm betting that there is a lot more to see and hear.

Email ThisBlogThis!Share to TwitterShare to FacebookShare to Pinterest
Labels: All Postings, Charlotte Martin