Last Wednesday was a notable day.  It was not only the last day of the Jewish Holiday but also the 30th Anniversary of John Lennon's death.  I had heard that WNYC radio, was commemorating Lennon's death with a show that evening featuring Meshell Ndegeocello.   And I also found out from reading the tweets on my Droid, while in line waiting to getting into Joe's Pub, that The National were Yo Lo Tengo's surprise guest at Maxwells in celebration of Chankah. 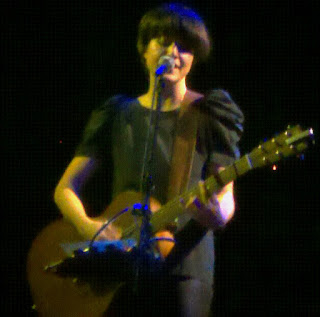 On that very same evening, I was fortunate enough to be seeing singer/songwriter Keren Ann (Zeidel) for the first time.  And I must say it was a wonderful virgin experience.  As preparation, I listened to Keren Ann's older recordings the night before the show and watched a YouTube video of Ann performing "Lay Your Head Down."  However, I still didn't really know what to expect since I had only become aware of Keren Ann by reading her bio on Joe's Pub online calendar.

Keren Ann's set began with, for lack of a better way to describe it, an interesting sort of introductory prelude.  As I sat waiting for the show to start, I noticed the pre-show music had suddenly gotten louder and the recording that was playing featured Keren Ann speaking.  The spoken voice on the recording listed amounts of items in descending order e.g. 88 of this, 75 of that, 63 of those, etc.  As the song was playing the lights on stage were slowly being lowered and the band started to assemble. When the recording ended with the words that sounded like "one cock," Keren Ann was front and center beginning her first song on acoustic guitar.  I may be wrong but I believe the recorded song was "101" from her upcoming CD of the same name. (Regarding those last two words, I hope I'm right and I heard what I think I heard when I heard it).

As Keren Ann played the beginning of one of her newest songs, "All the Beautiful Girls," Avishai Cohen played softly on his trumpet before Ann's vocal and the rest of the band joined in.   I don't think the beautiful girls Ann was referring to were angelic; the lyric contained lines like "They want to stay late - you wish you had a gun."   The song as I remember it was quiet yet somewhat thought provoking.

Karen Ann started out with songs that had a somber mood and eventually worked her way up to songs that were more rhythmically driven and a little more hook oriented.  Since all of Keren Ann's music has laid back flavor to it, that's not to say that she rocked the house by the end of her set. But to simply state that her songs grew, becoming more upbeat and pronounced by the middle of her set. 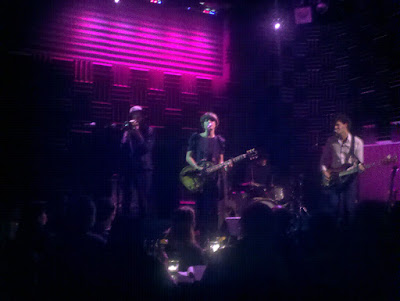 Ann's second song "Chelsea Burns" started with harmonica replacing the melodic lead that is played by a guitar on the recording.  Toward the middle of song Avishai Cohen joined in with rest of the band but this time with his trumpet muted.  Perhaps it was the songs lyrical content but "Chelsea Burns" reminded me of something written by Leonard Cohen.   When I listened to Ann's recordings prior to the show, both "Chelsea Burns" and  the following song "The Harder Ships of the World"  had production reminding me of Mazzy Star ( 90's hit song -"Fade into You" ).

In the early part of the show Ann stated that her and the band had just come from the airport. She said they arrived at Joe's Pub with plugged ears and runny noses but it was good to be back in New York.  Keren Ann didn't talk much between songs but she was nonetheless charming.  Between songs, there was a guy who kept yelling out "You're awesome!," from the corner of the room.  Keren Ann kept smiling at the guy.  Later when the guy said he was sorry to keep blurting out how much he liked her (which he also blurted out), Ann graciously said to keep it coming - it was good to hear.

Ann moved from acoustic to electric guitar for "In Your Back" which  had a chorus that reminded me a lot of the Beatles "Happiness Is A Warm Gun."  Ann then traded her guitar for bass as Thomas Semence traded the bass he had been playing for a guitar.  The show then got hotter with the stomping 12/8 blues " It Ain't No Crime."  It was one of my favorite parts of Ann's set. Avishai Cohen played squawking trumpet lines that at times sounded out to lunch (in a good way) and Keren Ann's vocals sounded like she was channeling Billy Holiday. 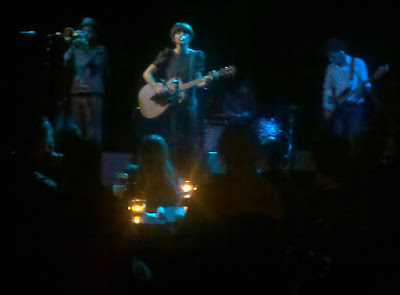 Ann stayed on bass for "Lay Your Head Down" which retained it's Indie rock feel especially with Semence's guitar part.  If the two songs that followed were any indication of how good Keren Ann's 101 CD is going to be, I'm ready to own it now! Ann and Semence went back to the instruments they started out with to play "Blood On My Hands."  The song had a provocative chorus that listed different things with blood  e.g. "blood on the microphone, blood in my whiskey" etc. The song had an interesting verse as well.  If I took notes correctly, there is a part of the lyric where she sings  "I was the darling no one could defeat, I walked through the dressing room door and pulled out a 364 Winchester."   For me, "Blood On My Hands" was another highlight in Keren Ann's set.

The other new song "Sugar Momma," featured an old guitar riff that's been around since the 60's.   I was trying to think of a song that had the same riff while I was watching the show but nothing came to mind.  Regardless, it's all in the arrangement anyway, riff or no riff - "Sugar Momma" was another strong song from Keren Ann's upcoming CD.

Ann went back to her older and most cherished material with the song "I'm Not Going Anywhere" which she intimately played solo on guitar with only Cohen accompanying her on trumpet.  Aymeric Westrich immediately started the following song "For You and I"  as each member of the band consecutively joined in starting with Semence on bass setting the groove and momentum. 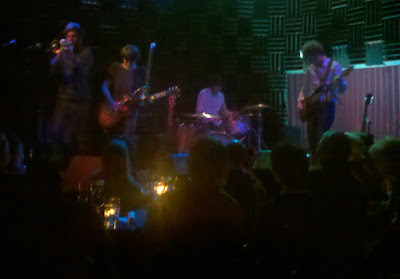 Ann ended with "My Name Is Trouble," which is the first song that's been released from her upcoming CD,  then closed with "Sailor and Widow."   Both songs have catchy melodies that can get easily stuck in ones head for days and both songs have something unique with regard to their songwriting. The title line of "My Name Is Trouble" is sung as a descending slightly chromatic melody which which compliments the words meaning.  As for "Sailor and Widow," the verse has a wordy lyric sung in a rhythmic pattern.

Keren Ann brought out a lyric sheet for her encore and sang John Lennon's "Love."  Ann performed the song on guitar but kept the simplicity of the original piano arrangement. It's one of my favorite Lennon songs, so it didn't take much to win me over.  Before doing her final song, Keren Ann said  her CD was due for release in the spring of 2011 (March 22nd) and that she would be back out touring in June.  Ann closed her set by returning to her opening somber tone by performing "Where No Endings Ending" with it's sleepy triple meter. It felt like Keren Ann's wonderfully enjoyable set came round full circle.  I'll quote the guy who blurted things out all evening by stating "It was awesome!!" 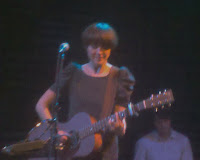 When Keren Ann's set ended I felt that I had seen something special.  I loved Ann's songwriting as well as her song arrangements.  As for her voice, there is something about it that made me feel I could listen forever.  I don't feel that way about many vocalists, so I'm kind of surprised by my own statement.  When she comes back next June, I'm looking forward to seeing her a few more times.

1. All the Beautiful Girls
2. Chelsea Burns
3. The Harder Ships of the world
4. In Your Back
5. It Ain't No Crime
6. Lay Your Head Down
7. Blood On My Hands
8. Sugar Mama
9. Not Going Anywhere
10. For You and I
11.My Name Is Trouble
12. Sailor and Widow
Encore
13.Love (John Lennon Cover)
14.Where No Endings End
The Band
Electric and acoustic guitar, bass, harmonica and vocals - Keren Ann
Trumpet and vox - Avishai Cohen
Drums - Aymeric Westrich
Electric guitar and bass, vox - Thomas Semence
Posted by Frank Grimaldi

Email ThisBlogThis!Share to TwitterShare to FacebookShare to Pinterest
Labels: All Postings, Keren Ann