When I got to the Bowery Ballroom, at around 8:15, the bar downstairs was pretty crowded. I hadn't expected the Friday night show to be sold out, nor did a expect a packed house. However, there was a pretty decent size crowd for a holiday weekend (Thanksgiving). When the room opened at around 8:40, the crowd seemed up for a show. Once the show began the audience was pretty attentive for all three bands.

Chappo started off the show at around 9:30. I was expecting a duo, because all the press pictures I'd seen were of Alex Chappo and Chis Olson Chappo (see above), but there were actually 4 musicians on stage. In their interview with The Deli, an online website, Chappo are referred to as “southern duo.” Therefore, I believe that guitarist Dave Feddock and drummer Zac Colwell are simply accompanying Chappo on tour. I at first thought Alex and Chris Olson were related because they are sporting the same last name, but I also surmised from The Deli interview that they are not. 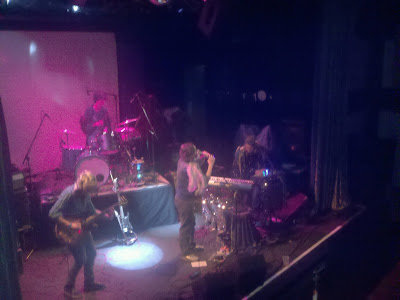 All four musicians instantly caught the attention of the audience through both their sound and their look. I will address their look first. Aside from the gold garland hanging on Chris Olson's keyboard stand, each musician was wearing something odd. I'm not quite sure what the band's look was conveying but nonetheless it was a look. Alex had a pair of wings hanging off his shoulders, drummer Zac Colwell was wearing this kind of black scarf that was draped off his right shoulder and Chris was wearing a military jacket with gold braids,epaulets and buttons. I at first thought - oh they're doing a something like  a Civil War angels look but then that didn't account for guitarist Dave Feddock's checkered hat which made him look like he was going deer hunting in Maine. 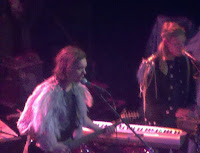 Chappo did all five songs from their current EP Plastique Universe plus 4 more which they are currently working on.   After making some weird noises on a small digital box stationed in front of him, Alex sang the lyric "My Baby's in the back seat reading a magazine" which began the song "Sci-Fi Bandits."  The descending guitar riff that came after each verse had a very 70's feel to it.  It later dawned on me that Alex's vocals and the song's main guitar riff reminded me of song "RocknRoll Hoochie Koo" by Rick Derringer.


For the second song Alex Chappo strapped on a guitar.    As with most of Chappo's songs, the new song "Explode" had a groove to it, that was equal parts indie and classic southern rock.  Chappo's music utilizes some blues patterns and riffs in many parts of their songs but never for a songs entirety. 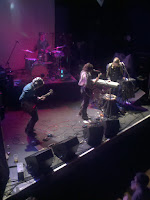 Chappo quickly moved through their set and kept quite a few people dancing as well as watching.  The boys had props like a large blue hourglass that I believe Alex said had something to do with Harry Potter.  Each band member also had colored rings which seemed to glow in the dark and underneath the lights. During another new song "Shots Fired,"  Alex popped open a canister of confetti which really surprised a few people in front of the stage. I later found it funny  that Dave Feddock tried to open a canister of confetti during "Moon Water" but couldn't figure out how to pop it open.

Chappo ended their set with a bang.  The last song started with Alex making a weird sound on his little box gadget  and Chris Olson  played a high pitch computer sound on his synth.  The song then moved along with a sort of  Led Zepplin sounding blues riff and eventually ended with Alex collapsing on the floor.  Chappo had a fun and entertaining set from start to finish.  I hope to see them again when their new material is released. 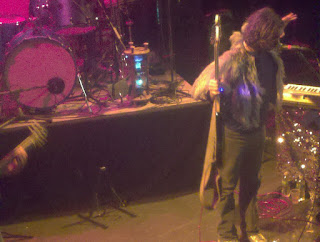 Bikini
The description on the Bowery Ballroom Website read as follows. Bikini is Nigel Diamond and Olivier Olivier.  Their music is like Salinger on MDMA.  Diamond is from Miami and Oliver was classically trained at the Royal Conservatory " (Canada).     ......and then there were three. 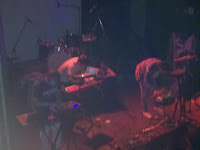 In the middle their set, I think it was Diamond who said that the 3 members of the band had never played outside of a basement and that the 3 wrote songs over the Internet. (I think Nigel Diamond was the blond guy but I may have it wrong - If I'm wrong, feel free to comment.)  Diamond stated that all three members live in different places.  One in LA, one in New York and one in Canada.  So my burning question is who was the third member? Fuck if I know, I can't find anything about the band online and I could not even find a MySpace page.

Nigel Diamond's setup was a MAC laptop and a M-Audio Controller.  The nameless guy's setup was a NORD synth and a drum machine and lead vocalist Olivier Olivier 's set up was a Korg and Drum Pads.

Bikini did 5 songs in what seemed like music that was dance oriented and somewhat in line with Midnight Juggernaut.  For the entire set, the stage itself was kept pretty dark but their were two gizmos the guys had placed center stage which threw weird color images on the surrounding walls. 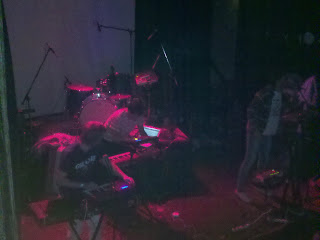 Other than stating there was a house dance feel to their music - it's hard for me to say I had a any sense of the bands sound.   They seemed to be having trouble with their equipment because they kept looking up at the sound booth to their right.  Olivier kept asking for more and more reverb on his vocals which made him sound increasingly worse as the set continued.  They seemed to get a little better by their 5th song but by then their set was over.

I really don't want to be too critical of Bikini because it sounded to me like Friday night was one of the first times they played a large room like Bowery Ballroom.   Everyone has to start somewhere and that's fine, I just hope that some of the bands they're touring with watch Bikini's set and give them a few pointers.

Bikini doesn't have any recordings that I could find - so I didn't put together a set list. 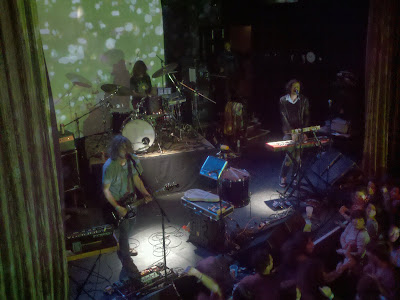 Midnight Juggernauts
I didn't know Midnight Juggernauts' music up until a week prior to seeing them in concert.  I actually went to the show as a lark.  I saw Midnight Juggernauts listed on the Bowery Ballroom Calendar, liked their name and decided I was going.  It was as simple as that.  I did eventually read their bio and listened to "Vital Signs" on their MySpace page but by then I already knew I was going to the concert.
When the Midnight Juggernauts hit the stage at 11:30 they pretty much went straight through their 12 song set, stopping only after their tenth song to leave the stage and return for their two song encore.  The set opened up with the audience cheering as Vincent Vendetta played an organ keyboard patch beginning the song the "Nine Lives."   As I watched Vendetta hunch over to play his keyboard,  my first impression was damn! The guys are tall - do they play basketball back in Australia? 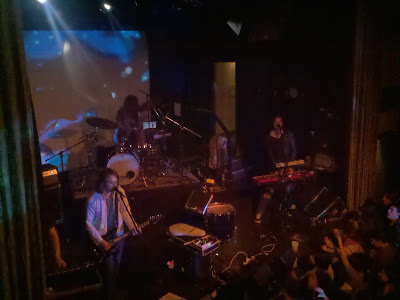 Immediately after the "Nine Lives," Vendetta played a similar keyboard patch as Daniel Stricker beat an even 4 dance beat on the drums for the song "Shadows.  Vendetta said "Alright, are you guys ready" and Andrew Szekeres came in with a kick ass bass line that sounded like it came straight off of a 1979 dance record.  Szekeres bass line cooks on the recording of "Shadows" but in concert it sizzled. (I love a good thumpin' bass line, it reminds me of old disco songs like Chaka Khan's  "I'm Every Woman," "Boogie, Oogie, Oogie" by A Taste of Honey , and "Double Crossed" by First Choice.)
The momentum grew with the song "Lara vs.the Savage Pack," with it's infectious organ riff and drum beat. I looked down at the crowd on the floor and everyone was jumping up and down in place.  Friday night's crowd pretty much danced through the entire set. "Lara" was followed by the previously mentioned "Vital Signs."   It was the first time that all 3 members of the band were playing percussion.  In the middle of the song,  Szekeres and Vendetta played the tom, the yellow block that sounded like a clave, and the drum pads that were placed center stage.  "Vital Signs" was also the first time I saw their tour manager fill in and play the moog that was on Szekeres side of the stage.  I was unable to get the tour managers name, so if anyone knows please feel free to leave a comment. 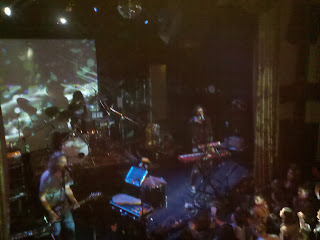 Vendetta said "it's been awhile since we've done this" before going into "45 and Rising." Vendetta sang without the effect on his voice that was used on the recording. So instead of sounding like Daft Punk, he sound like Peter Murphy from Bauhaus.  Vendetta has a really cool baritone voice that, at points during the show, also reminded me of the Righteous Brothers' Bill Medley.  I found the comparison especially true at times when he sang together with Szekeres.
Vendetta and Szekeres traded places and instruments for the song "Cannibal" as the Midnight Juggernauts' nameless tour manager joined them on bass. The show continued to move swiftly as Vendetta moved from guitar to bass and Mr.Tour Manager disappeared behind the the curtain for the song "Tombstone."  In the beginning of the song, Daniel Stricker made a small guest appearance playing the tom that was center stage before returning to his drum kit.  This time Vendetta stayed true to the recording and used the vocoder synth effect to create his Daft Punk sounding vocals. 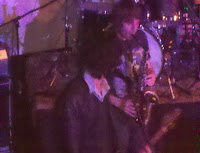 The big surprise of the evening was when the song "Technology" went directly in "Baker Street."   Vendetta who was still on guitar announced their tour manager (for the 1st time) who played the wailing sax solo which seemed like it was note for note true to Gerry Rafferty's original recording.   I later read that they have been doing the song as part of their set for the current tour.
Before doing the set's last song Vendetta told the audience that the band had received cameras from a magazine. He asked if someone would come up from the audience to take a picture.  (I can't remember if the picture was to be of the audience or the band - I must of had my head down taking notes).  The audience member took the picture and stayed on stage dancing to the song "Galaxy" before Mr. Tour Manager escorted him off.
When "Galaxy" ended, Szekeres played something on the center stage drum pads which he looped.  As the loop was fading, Vendetta took a picture of the audience and then walked off stage with the rest of the band.
The band seemed to ease into their encore with "Life Blood" and ended with drummer, Daniel Stricker kicking off the thumping "Road To Recovery"  The song seemed to climax with Vendetta doing a run across the synth keys and a tribal scream. 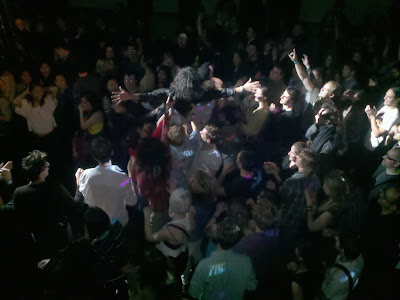 Midnight Juggernauts set was high energy and fun.  Part of the fun was watching their fans dance for the entire hour.  I looked down at one point and there was a young woman body surfing around the audience.  Let me put it this way at 15 bucks Midnight Juggernauts was not a bad choice for a holiday weekend.  I would even say they were a steal!