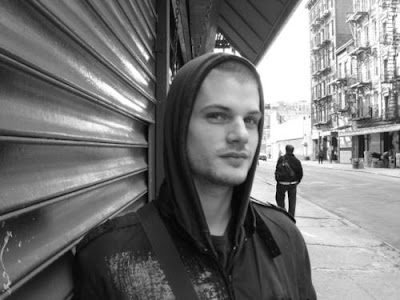 Jay Brannan's singer and songwriting career epitomizes the modern day culture of DIY indie artists. Since his appearance as an actor performing his own song "Soda Shop" in John Cameron Mitchell's 2006 film Shortbus, Brannan has used the film as a springboard for his songwriting career which has been slowly and steadily gaining momentum. 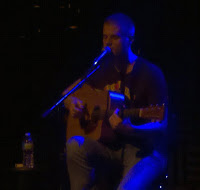 Like many DIY artists, Brannan uses Internet promotional and networking sites to his advantage. Twitter, Facebook, Myspace - Brannan uses them all, but what has kept most people interested are his numerous videos on YOUTUBE. Each video features Brannan singing and playing guitar in either his living room, bedroom or bathroom. Brannan always starts off by saying his name and then an aside before doing one of his songs. The asides may be references to something like his tee shirt, that is, if he's wearing one. And many of the songs are usually either brand new or works in progress at the time that he performs them on YOUTUBE.

My friend Gordon and I were placed at a table with another guy who was waiting for his boyfriend to arrive.  As we were chit chatting, Gordon asked the guy if he had seen Jay Brannan before.  The guy said he had not. He said that a friend showed him a YOUTUBE video of Brannan and he was sold.   I think on the whole that anecdote speaks volumes for how organically engaging Brannan can be as songwriter performing his songs.

On Tuesday, Jay Brannan was just as engaging as he is on video except it actually felt like we were in his living room.  Brannan's entire approach to performing is extremely relaxed.  So much so, that he sat in the audience with friends until about 5 minutes before going on stage.  Brannan's entire attitude made me think, that even though Brannan's songs are most often introspective and have a self effacing quality to them, he is a performer who is extremely comfortable in his shoes.

Before doing his first song, "A Love Story" Brannan announced his name and asked the audience to hold on because he had to put on some Chapstick.  After doing the song, he said it was a Guns and Roses love song and he was going to be doing their hits through the show.  The joke was in reference to his Guns and Roses tee shirt. 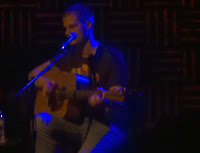 Jay Brannan then performed "Beautifully," which is one of the two original songs on his CD "In Living Cover," before moving onto the previously mentioned "Soda Shop."  He had earlier mentioned that he had a diet coke before getting on stage, so when he hit the high falsetto note at the end of the song he said "I can't do that note without a diet coke first," then continued what was left of the song. It was a funny moment.


Brannan has a wonderful tenor voice, which has a natural breathy quality to it.  That breathy quality is not overly apparent but is inline with a soft and often gentle approach to his melodies.  Brannan's voice was most captivating on songs like his cover of "Black Boys on Mopeds" or his own song "Goddamed,"  where he slipped in and out of his falsetto voice.

One of the things my friend Gordon pointed out was how Brannan kept his guitar playing interesting.  Brannan often brakes up the rhythm in his songs differentiating between the chorus and the verse.  A perfect example is his song "Everywhere There's Statues;" Brannan finger picks on the verse and strums on the choruses.  Another thing I noticed is Brannan sometimes plays single melody lines or bass lines between or under his vocals.  Brannan keeps to a higher register with a capo on his guitar's fretboard to seemingly create a cushion for his tenor voice, which also adds to the tender quality of his sound. 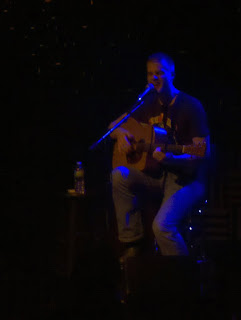 Before Tuesday night's show, I wanted to see Jay Brannan but  I was a little worried that an entire solo set of acoustic guitar and voice would be too much of the same thing.  But I'm happy to say my preconception of what Brannan's set might be like was totally wrong.   Each of the songs in Brannan's set had a novelty factor which always hooked me in and kept me listening.  Each song had it's own quirky or provocative twist but the most obvious were "Christmas Really Sucks," "The Spanglish Song," with it's chorus in Spanish, and the very gay "Housewife."  (I'm sure three quarters of the gay boys in that audience were thinking "Honey, you can come over and make guacamole for me anytime you want!").


Brannan did not do an encore but it wasn't needed or necessary; when Brannan did his last song "Can't Have It All" his set ended by coming emotionally full circle.  The song asks a question which deeply resonates with me - "Do you want a lover or do you want a life?" (I'm middle-aged and still pondering that question. Oy vey!) The last line of the lyric's chorus sums up the sentiment with "It's driving me crazy that I can't have it all."  When the song ended it seems that everyone at my table was equally moved.

Gordon and I stood in line, in the Public Theater lobby, to talk with Jay Brannan after the show.  I asked Brannan if he would verify his set list via email but he said he might not remember it.  I teased him a little about it but I was actually impressed that Brannan moved through the line up of songs he performed on instinct. It truly was a wonderful set.

Jay Brannan will be playing Le Poisson Rouge on Feb 4th, 2011.  He mentioned on Tuesday that he is planning to have a string section with him - so it promises to be great show. The main room at Le Poisson Rouge is almost twice the size of Joe's Pub put it is still a small enough room to see Jay Brannan up close and in person.

Email ThisBlogThis!Share to TwitterShare to FacebookShare to Pinterest
Labels: All Postings, Jay Brannan