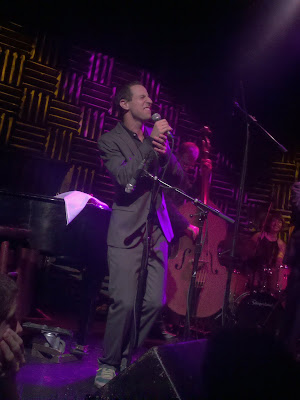 I first met Avi Wisnia at an open mic that I frequently attended on the first Monday of every month.  He was one of the few performers who grabbed the attention of everyone in room without even trying.  Set apart from those songwriters with folk, rock and R&B pop aspirations, Wisnia's sound is rooted in popular (jazz) standards and influenced heavily by Antonio Carlos Jobim.  His vocal delivery and presence have the same relaxed feel as Harry Connick, Jr .or Michael Buble but with a lot less (Frank Sinatra) schtick. And even though Wisnia's music falls under the broad heading of Adult Contemporary, there is a certain hipness that is more New York than Las Vegas. 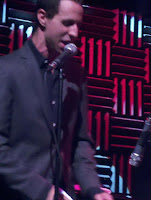 On Thursday night, I sat in the audience surrounded by friends, family and fans who had obviously seen Wisnia several times. Wisna's mom was in the audience walking over to tables and greeting friends like the proud mother of the bride. Before the show, she spoke to the two guys seated at the table in front of me and a couple seated to my left. I asked the couple if the woman they just spoke to was Wisnia's mother. They said yes, mentioning Avi Wisnia's parents were always at his New York gigs and that his father was in the lobby selling CD's. As an aside, the couple jokingly clarified that his parents do not go with him on tour. Personally, I found it sincerely heartwarming to see a talented musician having such supportive parents.
Avi Wisnia and his band walked on stage at 7:30 along with guest violinist Bjorn Delacruz who wore a white tuxedo jacket and sunglasses. (hmm...I guess DelaCruz was trying not to stand out from the other musicians by looking too conspicuous.) The band played an intro which seemed similar to an orchestra tuning before going into the opening song “New Year.” The song's intro began with Wisnia playing a rhythm pattern on piano, which reminded me of traveling music in film. (i.e. the kind of music that plays when a car is going over highways and bridges, as the opening film credits roll) There was one point when drummer, Kim Garey, played a kind of jungle (dance) pattern on the drums. I later listened to “New Year” and found that Garey was staying true to the recording's breakbeat drum feel. 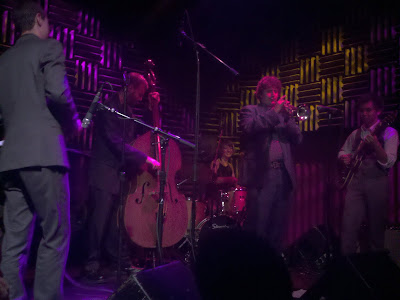 If you read this blog on a regular basis, you know that I love to see musicians enjoying themselves. Wisnia and his musicians did not disappoint.  They looked at each other when one liked something the other was doing.  Sitting behind her drums, Garey smiled for most the show while Gil Smuskowitz fluidly grooved along on bass.  Playing electric lead and rhythm guitar, the somber Toru Takiguchi seemed to be having a good time interacting through the music itself.  For example, during  “Back Of Your Hand,”  Wisnia accented the last word of several of the lyric's phrases like a question to which Takiguchi answered with tasteful melodic lines on guitar. 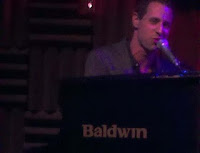 Avi Wisnia admitted he liked being in New York because there is a wealth of musicians. Wisnia displayed that fact by having guest musicians sit in on different songs. During “More Than Me,” guest trumpet player John Guari walked out to play a solo and continued playing to the end of the song. Afterward, violinist DelaCruz reappeared for “Simple Words,” a song with a country feel making it slightly and enjoyably different from  the other songs in Thursday night's set.


Wisnia played two covers during his set. The first was an arrangement of Wilco's “How To Fight Loneliness.”  Wisnia didn't change the arrangement too much but he did slow it down a bit by performing it more along the lines of Elvis Costello's “Almost Blue.”  The second cover was a smooth upbeat jazz arrangement of “No Scrubs” by TLC.  During the song, Wisnia sang and played jazz licks on piano over Smuskowitz's walking bass line.  On  the middle break, Wisnia and Takiguchi both took tasty solos.

There was one song in the show that had me fooled.  I originally thought it was a cover but Wisnia wrote to advise that it was indeed an original.  The song was “It's Gonna Rain Today,”  I don't recall the blow by blow details of the song, but I can honestly say it was good.  While listening to Wisnia's band perform the song, I wrote in my notes: – “Beautifully introspective vocals/pensive guitar and violin”  So it's safe to say, I was impressed.

Like Ben Folds, Wisnia does some interesting cover arrangements. I wouldn't compare Wisnia to Ben Folds because Folds' approach to music is more indie pop than jazz. Yet, I do find coincidental similarities in the material they choose to cover. On piano, both Folds and Wisnia have recorded covers of Cure songs and both have recorded songs by contemporary hip-hop artists. (Folds: “In Between Days” ; Wisnia: “Love Song”/ Folds: “Bitches Ain't Shit” by Dr.Dre; Wisnia: No Scrubs by TLC)

An audience member started clapping along when the Smuskowitz started the song “Rabbit Hole” with a strutting bass line. When the audience member tentatively stopped, Wisnia turned to the crowd and said “don't fight it – go with it.”  “Rabbit Hole” is a mid-tempo swinging 6/8 blues. Wisnia mimicked a muted horn solo and then did his best Louie Armstrong impersonation. Let me put it this way, Satchmo would have been proud. There is a very cute black and white video of the song.  It can be seen on YOUTUBE or by going to Avi Wisnia's site.

Thursday was second time I heard “Sink.” Since then it's chorus has been stuck in my head.  To perform the song, Wisnia came out from behind the piano to stand with violinists DelaCruz and the newly introduced Jodie Kelly.  In front of them was a stool with a white cloth on top of it, which Wisnia unveiled to reveal his childhood Fisher Price Xylophone. Wisnia actually played the Xylophone and it sounded great!! It made me wonder if Avi Wisnia was a child prodigy like Mozart.

After doing the song “Não é Coisa, “ Avi Wisnia said the song's title didn't mean anything. He said that his scatting was made up because he really didn't speak Portuguese, he just liked the way it sounded. Wisnia was being sly but honest. I put the title in Google's translator as well as the search engine. - “Não é Coisa” literally means “is not something.” Whatever it means, it's a fun song!

Wisnia ended his set with the title song of his new CD “Something New.” Oddly enough, it quotes numerous pop songs. While I was listening to it, I caught quotes from “Eleanor Rigby,” “Smooth Operator,” “I Will Survive” and “Saturday In The Park.” I 'm sure there were more songs mentioned within the song but those were the ones I caught. 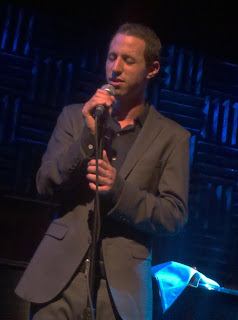 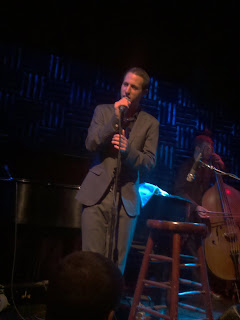 When Wisnia came back he performed the first of his two encores by himself on piano.   The song was “It's Only Me,” which was so good I was surprised he risked saving it for the encore.   For me personally, it was one of the highlights of the show.  It was a ballad in a minor key and in 3/4 time  -  it had the feel of a sad lullaby with a chorus that dramatically grew toward the end of the song.

The show ended on a high note with the band performing "So Danço Samba," which they did as a throw away.  That is to say, I could tell they had done the song many times before; it seemed like they were having fun with the song rather than offering it up as a performance.   Yet, the audience loved it nonetheless.

When I checked the calender for Joe's Pub on line, as I do periodically, I was really glad to see that Avi Wisnia would be performing.   I sincerely hope it means he has been getting noticed as an extremely talented musician, singer/songwriter and arranger - in my book his talent warrants recognition.

Email ThisBlogThis!Share to TwitterShare to FacebookShare to Pinterest
Labels: All Postings, Avi Wisnia