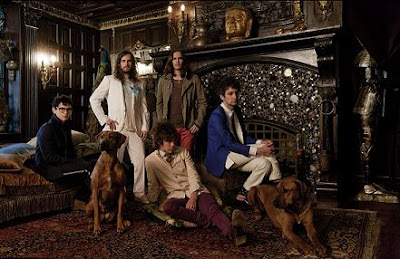 It's great that indie bands like Arcade Fire, Phoenix, The National and MGMT are playing big arenas.  It's great for them but not so much for many people like myself who want a closer and maybe more intimate view.  I enjoy seeing the clothes band members are wearing, the brand of instruments bands are playing and trying to figure out what is that little gizmo they're using to get an effect.  I also enjoy watching what's happening in front of the stage whether it's someone screaming something out, throwing something or handing something to the lead singer.  Before venturing to see bands at places like Madison Square Garden, Radio City or The United Palace Theater, I have had to just let go and admit to myself it will solely be about hearing the band.  The finer points and/or small details will have to be read on other blogs during the days following the show.

Just like MGMT, Amazing Baby's music feels like a "mesh-up" of musical styles. But unlike MGMT, Amazing Baby seemed to borrow more from the guitar heavy late 60's & early 70's. To elaborate further, their music seemed to have lots of psychedelic nuances, random guitar solos and glam rock power chords.   There were several points when I got that “Sewing The Seeds Of Love” feeling. But when Amazing Baby performed their third song “Headdress” there was a sound coming from the guitars that I found reminiscent Lou Reed's live album “Rock-n-Roll Animal.”

Amazing Baby had an over all echoing sound to their music, which lead vocalist Will Roan added to by blatantly adding delay to his vocals at several points. A good example would be the song “Roverfrenz,” which I believe was the opening song of Amazing Baby's set. I wasn't close enough to see everything on stage but I did see that Roan's mic was stationed by what looked like a minster's lectern, which had a flag of an upside down cross in front of it.  I didn't get the symbolism but it looked like Roan had his delay (echo) controller and/or pedal on top of the lectern.
Before doing a new song in their 7 song set “Nothing Will Come Between Us,” Roan said “the first time I came to Radio City was to see Ninja Turtles."  That was reminder that the members of the band are young but not as young as some of the people who were in the audience on Wednesday night. The new song stylistically sounded a little different from the other material in Amazing Baby's set. It's usually a given that bands take on some new directions on their sophomore recordings and perhaps that is what I was hearing.

Amazing Baby ended the set with a song that reminded me of George Harrison – Beatles (at least that's what I wrote in my notes). The song ended after working it's way up into a frenzy. The band then walked off stage and the curtain closed (a rarity – usually the following band is set up with the audience watching). I liked Amazing Baby and hope to see them headlining, at a smaller venue, in the future.

The members of Amazing Baby are Will Roan  on vocals and keys, Simon O’Connor on guitar, Rob Laakso on guitar, Don Devore bass, Morgan Z on keyboards and Prince Terrence on drums.

The first time I ever heard of MGMT was after seeing Weezer on Halloween of 2009. Rivers Cuomo threw in the song “Kids” and Lady Gaga's “Poker Face” as part of their encore. Of course, since I was writing about Weezer's show – I needed to figure who originally recorded “Kids.” (Yes, I was late to the party but I don't feel the need to pretend otherwise). I liked a few songs off the “Oracular Spectacular” CD but I can't say I was blown away. I later saw that they had been nominated for a Grammy and that they were critically acclaimed darlings.


Like many people, I stray away from artists who have been hyped. Yet, I was curious. I read about them in the April issue of Rolling Stone. I appreciated the fact that Ben Goldwasser said “It's so weird for us to be in this position, because we don't understand why we got as popular as we did...We're dorks. We feel like we tricked everybody.” And their in lies their charm, eccentric guys who's attitude toward their music is very les affaires.
But I was still on the fence, I waited till the very last minute to buy a ticket for the show from someone on Craigslist. I guess VanWyngarden's admission from the same Rolling Stone article that he didn't like live music or crowds, didn't exactly make me want to run to the Radio City box office for the best ticket I could get.
When the stage curtain opened and MGMT walked out, everyone in the orchestra section stood up (I was in row ZZ). I had read, on another blog and heard from a friend, that the band's faces weren't lit. Yet, it wasn't as bad as it sounded. Basically, all the lighting was behind them. There were these 3 white canvas panels assembled together, with the most prominent panel being the same sort of wave shape on the cover of MGMT's CD “Congratulations.” There were mostly patterns but also images reflected onto the panels through the entire show. Basically, the backdrop was an giant illustration which was consistent with MGMT's album covers and their website.
When MGMT opened up the show with “Flash Delirium,” I knew that they were going to do a different set from the night before. The band probably have tons of loyal fans who bought tickets for both nights so it wasn't a bad idea. VanWyngarden didn't do a lot of talking to the crowd and the band basically ran through their songs like they were rehearsing in front of the audience. Before playing “It's Working,” VanWyngarden said “First row – how are you guys doing, Second row - how are you guys doing, balcony - ….etc.,” - it was playful and cute.
When the band got to “Electric Feel,” the crowd roared and those who had eventually sat down stood up. During the song, the letters M G M T lit up from behind the canvas panels and the audience once again roared. Before doing “Song for Dan Treacy” and going directly into “Anything Could Happen” VanWyngarden made reference to a guy sitting up front with a pair of crutches. He said I hope you feel better and dedicated the first song to him.
At the end of “Siberian Breaks,” VanWyngarden said something like we know the song was long but we like to play it anyway.( And?) I found most of the time the audience was talking or mulling around the hall unless MGMT” was playing “the hits.” At least that was my perception from where I was sitting. When MGMT played songs like “Time to Pretend,” there was a woman behind me who would scream “play it again.” However during songs like “Siberian Breaks,” the audience either sat down, checked their email or went into the lobby for a cocktail. MGMT played “Destrokk” as the following song  and since it wasn't well known it didn't exactly win the audience back.
I don't think the lighting was a good choice and as I'm writing this I am sorting out my thoughts about it. The projections onto the canvas panels didn't always seem to hold people's attention. It had the same affect as a lava lamp in someone's living room; cool when first noticed but then ignored. In general, spotlights are used to indicate a person is singing or taking a solo but I don't think that is their sole purpose. I think in a large arena, spotlights or floodlights say to an audience “I want you to listen to this.” I think the audience would have paid a lot more attention if lighting was focused on MGMT through different parts of their many songs.
Musically I think MGMT was great, I haven't commented on the music too much because the sound was just bad on my side of the hall. I think when it comes to seeing bands in Radio City, it's either best to be orchestra center or one of the balconies. I was on the in the orchestra house right (stage left) and the sound was mush. However, I did hear the way the band was supposed to sound by listening to a recording of the show, done by nyctaper, from the night before. (Except for missing Amazing Baby, I wish I had seen that show.)
The show ended with a recording of “Kids” which the band sang along to as characters from the kids TV show “YO Gabba Gabba” ran on stage. I have to admit I didn't know who the characters were and thought to myself “what's up with the big red one eye'd dildo.” Even though the band didn't play “Kids,” I didn't mind because the last song had a fun whimsical feel.
The encore kind of fell flat for me. I enjoyed all three songs but it felt like MGMT's performance energy dropped. Yet, I did like the way VanWyngarden played an acoustic intro before starting "Brian Eno."
Would I see MGMT again? Not sure. The band has been slowly growing on me. But I don't want to see them in a big arena unless I'm in a third row center orchestra seat. Donations?