I got to Bowery Ballroom early because I wanted to make sure I had a table in the balcony . Unfortunately, they weren't letting anyone into the downstairs lounge until 8:30. So ticket holders had to either wait outside or comeback. There was very tall thin girly-boy with big black sunglasses by the door. He stood there as if he were first in line even though no one had cued up behind him. Once they let us in the lounge area, the boy asked me what happens next. I pointed to the double doors, telling him they would open once the bands finished their sound check. I also told him he could relax and have a seat – that the doors would open soon. He was quite animate. “Oh No!” he stated. He said he had waited 2 years to see this band (I clarified – this band meant Dragonette) and he was going to be the first one in front of that stage. I said nothing else to him but I did have an inward chuckle – he reminded me of myself when I was young. Moreover, it was an indication to me that Dragonette must be something special.

Once I was seated in the balcony and looked out over the main floor, I saw that girly boy was stationed by the stage as indicated and chatting up a few girls. The music coming over the sound system was very early 60's R&B until exactly 9:28, when the music changed and went up twenty decibels. The recording that was played was IAMX's CD “Kingdom of Welcome Addiction.” Either someone wanted the audience to hear that recording or Young Empires wanted it played as warm up. Whatever the case, it was teeth-loosening loud.

When Young Empires hit the stage about 12 minutes later, the sound was still loud but appropriate for their music. Their electronic sound leaned toward industrial dance reminding me of NIN and Muse.  Before Young Empires set began, a very pretty blond woman sat down at the reserved table in front in me. She saw I was writing and gave me smile. When the band finished, she asked what I was writing for and if I liked the band. Lucky for me, I didn't have to lie, I honestly enjoyed Young Empires. (I am a horrible liar.) She said she was the lead singer's girlfriend.

Young Empires started their set with “Diamond Rings” which instantly grabbed the audience's attention. The intro had a intriguing fluttering flute sample which ran through the entire hard hitting song that followed. The next song “Against The Wall” and the song they later ended with “Rain of Gold” made me feel like I was back in the 80's at Danceteria. I wanted to hear either song mixed into songs by bands like Killing Joke, Gang of Four or even Human League.

Speaking of the 80's, Young Empires seemed to be sticking mostly to Roland TR808 drum machine sounds. The 808 sound was especially prominent on the song “Glory of the Night.” (Same kind of drum sounds on Marvin Gaye's Sexual Healing or “Set It Off” by Strafe). Young Empire's song “White Doves” with it's steady kick drum all through the song had that hypnotic U2 feel.

The band played a new song titled “Summer Lovers,” which if I remember correctly they used a keyboard arpeggiator for the intro. I emailed the Young Empires through their MYSPACE page and they told me they would be doing a demo of the song in the fall. All three guys seemed very into the new song and were bopping along in a bent knee stance. The song had several lines about being under water which compelled vocalist Ellingson to pour a bottle of Poland Springs water over his head and then squirt the rest out over the front of the audience. After the song Ellingson told the audience how he over did his water bit in the UK and ruined a girls freshly applied makeup.


Young Empires is a trio out of Toronto,Canada featuring Robert Aaron Ellingson on keyboard and lead vocals, Jake Palahnuk on guitar, drum machines, backing vocals and keyboards, and Matthew Vlahovich on Bass. Young Empires seems to be touring with only 6 demo songs under their belt which I find very, very – (one more ...what the heck!!) very telling. From what I have read on line they have been making quite a stir. If they can turn heads with songs they consider demo's, imagine what is going to happen when they have an actual released album.

Sometimes, when there are 3 bands on the bill, one of the bands suffers in terms of sound. On Friday night, I thought it was Shy Child's turn. However, from what I can tell from looking at their live videos on YOUTUBE, Shy Child likes their sound really loud. If the latter is the case, I'm not getting it. Shy Child  for the most part have clear vocals on their recordings, therefore it didn't make sense to subject the audience to vocals that were mush.

Shy Child did manage to go over well. I think the audience tuned into there many interesting grooves and melodies. Under a wall of reverberating sound, they did nine songs which included the “Noise Won't Stop” and “Drop The Phone,” along with the very danceable “Liquid Love.” Shy Childs' sound is along the lines of MGMT but there is more of an electronic new wave and punk feel.

Shy Child is a duo made up of Peter Cafarella on keyboards and vocals, with Nate Smith on drums. They were joined by Seth Misterka, playing sax for about 4 of the 9 songs. I found Peter Cafarella's goofy persona on stage – entertainingly lovable. He said things likes “word!” or “peace and love.” And I thought Smith's drumming was really tight to the point of being a human drum machine.  As for Misterka, his sax got lost in the loud mix.

Did I like Shy Child? I did. But had their music not been as loud or as loud but with a better balance, I would have had more tangible things to write about them.

At 11:45, the stage was lit the color red as were the lights on the vertical poles placed behind the band for their set. Dan Kurtz on keyboard and Joel Stouffer on drums started playing simmering rhythms as vocalist Martina Sorbara walked on stage. The rhythms boiled over into the recognizable intro to the song “I Get Around.” The audience automatically cheered and when Sorbara sang part of the hook “I say yes” the audience answered with her on the line “when I ought a say no.”

From the beginning of the set, Dragonette intentionally made the audience feel like the were at a dance club. Besides the a fore mentioned vertical poles there were circular kind of police car lights on stage and color spots projected against the walls. One of the spots later featured Sorbara's image in tableau.(see the photos at the very bottom of this post)

Aside from the lights, Dragonette kept the dance energy going by moving straight through the first 3 songs. Sorbara seemed to really be enjoying herself along with audience who automatically mimicked her arm moments. She danced around so much that after the 3rd song she said “funny when the show starts and I'm already out of breath.”   Sobara  has a poppy little girl vocal quality that has been prevalent for the last 3 decades among female vocalists.

The one thing I couldn't help but notice was how sexy all three musicians were on stage. Sorbara wore tight tie dyed black pants and loosely fitting white blouse that kept sliding off the shoulders. Her outfit as well as persona was relaxed and sexy at the same time. The guys wore simple matching tee shirts with a checker-board design on the front. With a Colgate smile and broad shoulders I couldn't help but notice that Dan Kurtz looked very alpha male. He looks more like a member of a college football team than a member of rock band.    Kurtz switched to bass for the song “Liar.” Yet, I  think it was ironically sexy when Sorbara strapped on a electric guitar for the song “Take It Like A Man.” I won't elaborate - you, the reader can fill in the blanks.

Sorbara told a funny story, before the song “Easy,” about being at the Bowery Ballroom a few years back to sing one song for another band. She talked about stumbling around the place having had a few too many drinks after her performance. Also humorous was the name of the next song which she said was new. She said the band (we) liked to call it “Get Your Titties Off My Things.”

Dragonette than moved on to the song “Fire In My New Shoes” which is a song Martina Sorbara sang on for DJ and producer Kaskade. After the song, Sorbara talked about having to shoot a lot of the scenes for the video backward and then did a backward version of the lyric. She also pointed out that the video was shot in Williamsburg. When Dragonette moved on to the song "Black Limosine," Sorbara emoted the call girl lyrics to the quirky musical arrangement.

I had to laugh when Dragonette got to the “Big Sunglasses” because the earlier mentioned girly-boy put on his big sunglasses in the true spirit of the song. It was funny and very cute at the same time.

Dragonette moved from “Okay Dolore” through the last 3 songs of their set, never losing the momentum  they started with at the beginning of their set.  The audience sang along at several points and clapped along with “Fixin To Thrill.” They of course received well deserved applause which brought them back for an encore. They performed my favorite song “Competition” and then “We Rule the World” before calling it a night.

I would refer to Dragonette as a mainstream pop dance band rather than as an indie band. Their accessible  dance music seems destined for bigger arenas than the Bowery Ballroom. Though no as exotic, Martina Sorbara  can fit in perfectly with a slew of pop vocalist from Gwen Stefanie to Rihanna and yes, Lady Gaga.

I would definitely see them again – eye candy for all persuasions and fun music - their concerts are a good night out.


More photo's of Dragonette taken with my Droid X. 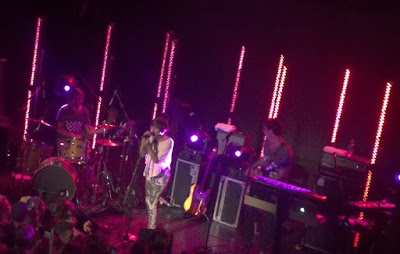 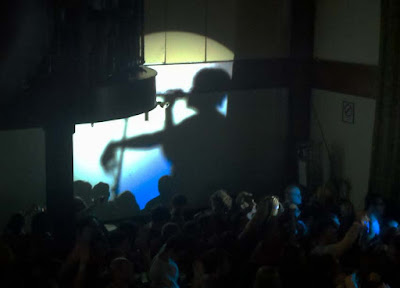 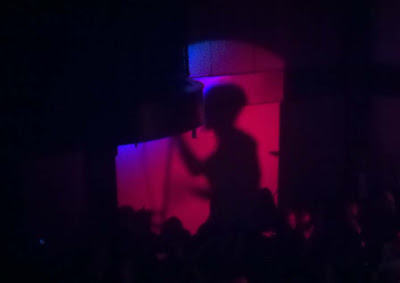 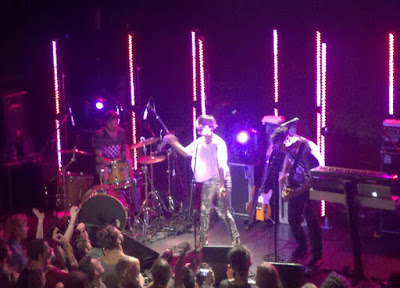 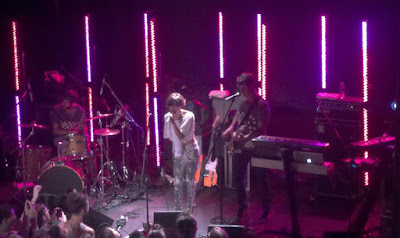 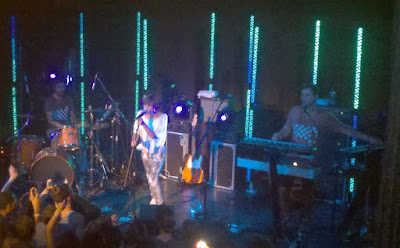 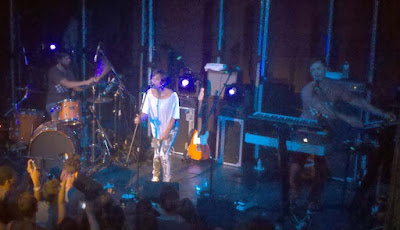 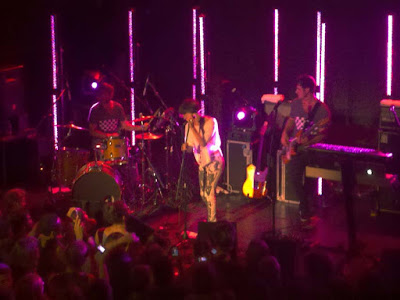