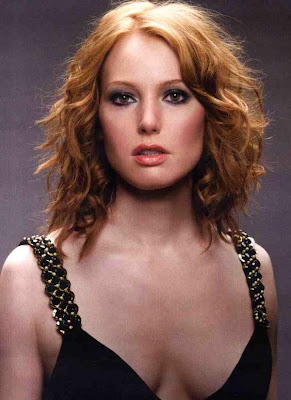 I check the listings for Joe's Pub on a regular basis because it has become one of my favorite New York venues.  So when a work colleague asked if I was interested in seeing Alicia Witt, I had already checked out her bio on Joe's Pub's calender and was entertaining the idea of seeing her perform. Though unlike my colleague, I was unfamiliar with Alicia Witt's acting career. I am one of those people who pays an expensive cable bill each month but ends up watching CNN because I'm overwhelmed by the number of cable channels.

I checked out Alicia Witt's IMDb movie database webpage. It shows she has quite an extensive bio.  So, to get a small idea of what I missed,  I watched YOUTUBE videos of Alicia Witt playing an erotic dancer on the TV show “Two And A Half Men” and two of  her guest appearances on Craig Ferguson.  During one of the interviews, Alicia Witt talked about how she was reacquainting herself with her first love which is music.  She has evidently been playing piano since she was a child.  Proof of that fact is a video of her as a young girl playing boogie woogie piano at the end of a “Twin Peaks” episode which is a must see.  She's sitting at a console piano in a pink and white gown with a tiara on her head. 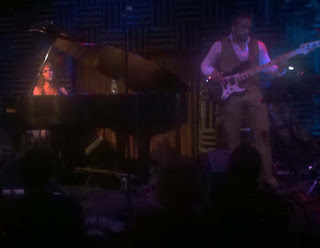 I had just about finished my arugula salad when at 9:36 the lights went down and the band, who was about to play along side of Alicia Witt, walked on stage. The band stood there for about two or three minutes waiting for Witt to appear and sit behind the piano. At the same time, the hushed audience awkwardly waited as well. When Witt finally showed up, the applause she received felt tentative at best.

Alicia Witt opened up with "Blind" which is one of the four songs on her newly released EP. As I listened to Witt's vocals, the name Paula Cole came to mind. Both women's music and vocals have an Americana feel; there's definitely a country flavor with borrowings from alternative rock, R&B and jazz. As the song progressed, I noticed I wasn't hearing a lot of piano – it may have been where I was sitting but it still seemed to be too low.

Witt introduced her next song as something she had been recently working on in the studio titled “The Other Girl.” Like most of Witt's material the song had a strong chorus and an easy going mid-tempo feel. Before doing a follow up with the song “Do It,” Witt described how she used to play her music for her best friend and how her best friend convinced her that her music making needed to move beyond her living room. Since “Just Do It” is a slogan for Nike, I thought the song might be a little contrived but it was actually wonderful and a lot more meaningful a song than Witt's setup implied.

Witt's setup for “Bad Idea” was quite funny. She called herself a 'klutz' because she went jogging in New York and tripped over a crack in the pavement. (Honey – you want to see klutz, I trip over cracks while walking slowly). She then talked about going on a date that very same night and fainting as she and the date were saying goodnight. “Bad Idea” was one of the highlights of the show. The band bopped along with the song's punchy feel as Witt played some ragtime licks on piano between her vocals. 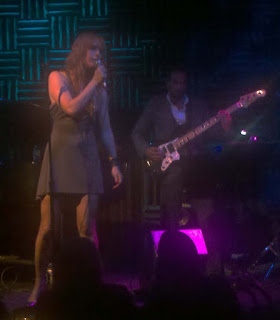 Witt came out from behind the piano for her fifth song “New York and Me.” It was nice to see her front and center. In a simple taupe colored dress and black heals, it was evident that Witt is as beautiful in person as she is on camera.  But more important, her center stage moment was when her vocals were strongest. The song wasn't bad either, it felt very“Beatlesque.”

After introducing the band members, they walked off stage and left Witt to perform solo for one song. She did “Falling” which was a beautiful ballad as well as another highpoint.

Sometimes artists do things that go right over my head. I will admit it. I'm not a brain surgeon. With that said, I just wasn't getting Alicia Witt's version of “You Can Call Me Al.” Witt introduced the song by saying that she didn't write it and if the author heard the way she does it, he would probably say he didn't write it either. Witt performed Paul Simon's song as a weird rubato sort of jazz arrangement. It was like "Al" on herion. When the song ended, the audience's applause once again felt tentative.

I read there was a point in Witt's long career that she supported herself by playing piano at the Regent Beverly Wilshire Hotel. I got the feeling that it strongly influenced some of her songwriting specifically when I heard the two songs which followed. The first was titled “Red Light” which felt very 70's Billy Joel and Christopher Cross (think “Arthur's Theme”).  My friend remarked that the second of the two titled “Taken” sounded like a bunch of songs from different musicals strung together. I agreed, except for me that was part of the song's appeal.

Alicia Witt ended her set with another mid-tempo ballad followed by what she called her girl power anthem titled “What About Me.” When she walked off stage, Witt received a good round of applause and came back for an encore. She returned with the song “Know At All” which I thought was one of her most interesting. 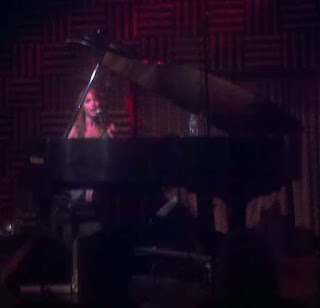 Honestly, when Alicia Witt's set ended I felt disappointed with her presentation. Her talent as singer/songwriter is undeniable, but her performance was uneven.  I believe her song order and the way she introduces her material needs to me fine tuned.  It felt like there were too many times that she needed to tell the audience what inspired a song or what a song was about instead of letting the song speak for itself. I would have also liked to have seen her have fun with the band and maybe the audience. The band seemed more to be playing for her rather than with her.
Aside from presentation, there were problems with sound levels, which definitely had a effect on Alicia Witt's performance. There were moments in the show when Alicia Witt's vocals went sour. Those moments came whenever she was sitting behind the piano accompanied by the band. As the show progressed, I surmised that the pitch problems (sour notes) were due to the fact that she wasn't hearing herself over the band and through the monitors.  Whenever ever Witt sang with just the piano or when she sang center stage her sour notes dissappeared.

Lastly, there was a cameraman taping the show which is generally not a problem. However, the cameraman kept opening and closing the backstage curtain for the entire show. It wasn't the cameraman's presence in and of itself that bothered me – it was his constantly opening and closing the curtain. He unintentionally kept stealing focus. (Each time the curtain opened, I thought a surprise guest was coming out).

It seems Alicia Witt is seperating herself from Alica Witt the actor and is approaching her concert performances as a songwriter and musician which is commendable.  But I really believe that with some direction and/or more emphasis on presentation, she can shine a better light on her musical talent.

Email ThisBlogThis!Share to TwitterShare to FacebookShare to Pinterest
Labels: Alicia Witt, All Postings