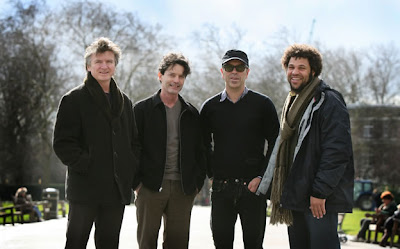 Monday night was one of those nights when I couldn't get it together quick enough to make it to the Bowery Ballroom on time.  So I unfortunately missed the first song of Lawerance Arabia's set.  However, the worst part about being late was not finding a good spot to watch the show.  A bad spot in a crowded house meant I had to endure people constantly passing back and forth in front of me and cameras blocking my view.  I had to work really hard to chil-lax, which by the middle of the night became my new mantra. But I survived and managed to enjoyed the show.

James Milne is the real name of the artist who likes to perform under the pseudonym Lawrence Arabia. Like Crowded House's Neil Finn, Lawrence Arabia is originally from New Zealand. Lawrence Arabia's music can be defined more or less as folk rock. Though Milne is still young, none of the influences I heard in his music were his contemporaries but artists from the 50's, 60's and 70's.  That is probably why I felt at home listening to his music. 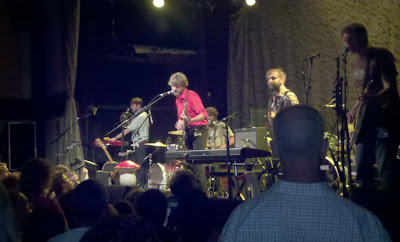 The first song I heard from the band was “I've Smoked Too Much.” which was kind of a poppy ballad with falsetto background vocals. I thought it was kind of cute but I wasn't impressed until I heard “Beautiful Young Crew.” That second song (actually the band's third) had the best lyrical description about being young compared to any song I can recall. The chorus has a sort of reggae feel with the lyric being “And they love each other, but they hate each other, they're afraid of each other because they want to screw each other.” The lyric is simple but precise. Like “Beautiful Young Crew,” the next song also had a trumpet solo performed by Tom Watson which I really enjoyed. Except this time, the song's basic feel was more calypso.

All through the Lawrence Arabia's set I kept hearing Ray Davies of the Kinks as well as George Harrison. The similarity to Davies vocals became apparent to me when Lawrence Arabia performed his own songs "Talk About the Good Times." and "Fine Old Friends. " But when Lawrence Arabia and his band got to "Apple Pie Bed," with it's distorted bass line, I thought I was having a 70's flashback. The song had a sort of dance flavor but at the same time reminded me of the Beatles song (written by George Harrison) "Savoy Truffle."

Lawrence Arabia ended his set with a song I didn't recognize but enjoyed. There were a lot of sweet harmonies and a song fade out only to return with a musical tag ending. Since seeing the show I've been listening to Lawrence Arabia's album Chant Darling. And now I have one more comparison - The Beach Boys, their brand of vocal harmonies are all over the album.


What makes Lawrence Arabia's music different from his influences is his lyrics. They seem to be all about sex but from his own personal perspective. If you're interested, check out the video for "Apple Pie Bed," which can be found on YOUTUBE. 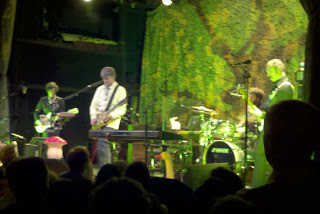 
Crowded House got on stage at about 9:00PM and did not end till past 11. Yes, it was a long show but a good one nonetheless. The band's stage setting had a fairytale motif. Why - I don't know - but that's what it looked like. The curtian behind the band seemed to be a green moss pattern. Scattered around the stage were a plastic goose, rabbit, teddy bear and mushroom.. Each of the items were lit from the inside and looked like ornaments people put out on their lawns. 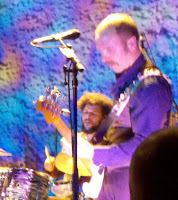 I had 2 expectations when I got my ticket for Crowded House, both of which were gratefully not fulfilled. First, I was expecting the band to be brooding. Through the years I always thought Crowded House's songs were sad and melancholy. But that's their songs, on stage the guys had a keen sense of humor. Second, I was.....well....expecting an oldies show (my bad). I was expecting songs like "Sister Madly," "Better Be Home Soon," and "Nails In My Feet." They did do some of their well know material but they also performed songs released with the past 10 years. (What a concept!!!)
The boys dressed up for the occassion. They each wore a collared shirts. Mark Hart wore a dark suit and Neil Finn looked like he was dressed for Sunday brunch in what looked like a linen suit and a silk tie. Now that Finn's aged he looks more like a collage professor then the leader of a rock band.


Crowded House started the show with " I Feel Possessed," which is the opening song from their 1988 album Temple of Low Men. Before doing the next song, Neil Finn greeted the audience by speaking through the vocoder on the Korg mini-synth that was stationed next to him. He used the vocoder for the song "Saturday Sun" going back and forth playing lead guitar and the Korg. When the song ended, Finn kept talking through the vocoder. Finn was interrupted when someone in the front audience made a sort of puking sound which Finn imitated. Finn then pointed the person out and jokingly asked him if he was Australian. It then sparked a humorous conversation between Finn and bassist Nick Seymour.
When Finn started "Fall At Your Feet," the audience automatically sang along and kept singing till the end of the song. Finn gave the audience a chance to go solo, when he added a coda after the actual song and gave the audience parts to sing as he strummed on guitar.

Crowded House then moved on to "Don't Stop Now" from the 2007 album of the same name. Mark Hart, who had been playing a piano to the right of drummer Matt Sherrodd, moved upfront (downstage) to play guitar and do background vocals. There was something about the country feel of the jangling guitars and Neil Finn's vocals that reminded me of REM. 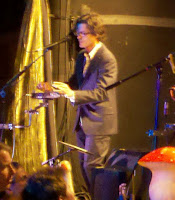 Next 2 songs were from Crowded House's most recent release Intriguer. The first song “Either Side of the World” had a breezy feel to it. On the musical break, Mark Hart played a whimsical piano part as Finn played a whistle like patch under it. For “Twice If Your Lucky,” Neil Finn played the piano on the keyboard to left him and Mark Hart played steel pedal guitar. There is always a line in a Crowded House lyric that pulls me in and makes me listen. In the song “Twice..,” I really loved the lines  “You think reality's shut you down and you're locked away where you can't get out.”
Neil Finn started “Private Universe” by noodling on his guitar while it was being run through a delay pedal before strumming the song's opening chords. The song returned to a psychedelic feel with Neil Finn again using the delay and Mark Sherrod utilizing a drum machine for effect. As the song broke down into a echo chamber sort of spacey feel, Finn segued into “Black and White Boy.”
Monday night's show was a bit of a family affair. Neil Finn brought out his son Liam on  acoustic guitar for the songs “Say It Again” and “English Trees.” Then two songs later, brought out his wife, Sharon for the songs “Isolation” and “Archer's Arrow.” Though Finn now has a grown son and gray hair, his voice is still as vibrant as it was in 1987. And judging from the songs I heard from Intriguer his songwriting is still powerful as well.
After “Mansions In The Slums,” Neil Finn played acoustic guitar for “Time Immemorial.” At the end of the song, they tagged on “Love is All that Remains.” I believe the song is from one of Neil Finn's solo efforts. That tag ending was interesting. Finn played the small Korg, as Mark Hart worked the drum machine and Matt Sherrodd played shakers. 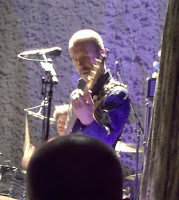 “Four Seasons In One Day” was another one of those songs where the audience sang along from beginning to end. As the audience sang along, Finn asked them to be more extravagant – I think he meant he wanted us to sing out more. When the song ended he said that he was glad that everyone in the audience resisted the urge to do a Mariah Carey. He thought it was great that there was not one melisma in the entire room. I guess we now know how Finn feels about contemporary singers.
Toward the end of their long set, Crowded House relaxed into being more like a band clowning around in their garage.  Neil Finn was sitting at the front keyboard and Mark Hart was at his stationed steel guitar when Finn nonchalantly asked him to do a song.   Hart started playing the country song  "We're Not The Jet Set," which was clearly impromptu and not practiced at all.  The rest of the band joined in once they got the idea of the song.  Finn said the song was a work in progress and poked a little fun at Mark for being a boy from Kansas.  (Both Hart and Sherrod are Americans).
After a few more smart-alec remarks from Nick Seymour, who can be quite funny, the band went into "When You Come."   Neil Finn took a solo at the end of the song.  He is quite a good guitar player which was pretty evident all through the show.  Crowded House closed their set with "It's Only Natural."  Since it was a long set, I didn't think they would come back out for the encore. We had already reached the 2 hour mark.
But Crowded House did come back to rock us with "On My Command," which they followed up with "Weather With You."   As the Neil Finn started playing the chords to the latter, he acted as if he had an epiphany because the chords apparently reminded him of Neil Young's "Down By The River."   I was hoping that Crowded House would do "Chocolate Cake," I was curious to see how Finn would update the lyric.  Well, they did it and included lines about Lindsay Lohan.  But...I guess since they have done the song a gazillion times, they did a throw away polka version.  It was funny and cute, but I was dissappointed.  I wanted to hear the song closer to the established arrangement. 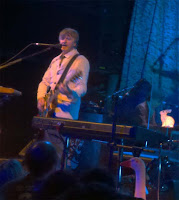 The last song was "Elephant."   Dispite the show being really long, the audience stood there after the encore expecting another. But the lights came up and we got the hint.  Did I say the show was long?  Yea, I did.   Crowded House is a great band with a history of great songs - no doubt.  But having said that, I'm not sure I would like to see them again.  It may have been Monday night's crowd at Bowery Ballroom or a certain sameness to all of Crowded House's songs that bothered me..  Maybe it's a little bit of both. 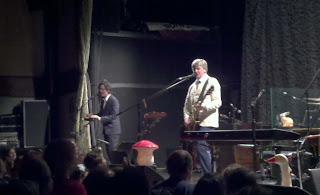 (All the above pictures, except the first band press photo at the very top, were taken by me with my Droid X.   A little blurry but not bad for a smart phone.)