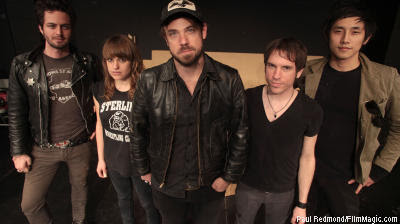 On Saturday night, I didn't know where I was sitting until I picked up my ticket inside Town Hall.  But when I found out that I was in the fifth row - first seat on the left side of the isle, I turned into a very happy camper   Airborne Toxic Event were one of the first bands I reviewed when I started this blog almost one year ago. Since I am writing about them again as a benchmark for this, my 50th posting, having a good view of the stage was important.

The Calder Quartet kicked off the set with a short introduction before Airborne Toxic Event walked on stage.  The band went immediately into “Wishing Well” as the audience clapped and stomped along with the boom from Daren Taylor's kick drum.  Instead of playing his usual acoustic guitar, Mikel Jolett  started the first song by playing a Nord keyboard.  I immediately thought the band seemed more relaxed since I last saw them. This time there wasn't a special set behind them – just a black curtain. And this time Noah Harmon's clothing looked more hipster than goth and Steve Chen's haircut wasn't so quaffed. Airborne Toxic Event did a lot of new material from their upcoming CD, which is due for release in the early part of next year. Before doing “This Losing,” Jollett mentioned that the song was one of their earlier songs which didn't end up on the new album. He said he believed people might have thought it should have been included. I was unfamiliar with the song but I do know it is on their concert DVD “All I Ever Wanted” When I came home I viewed an old video of Airborne Tox performing “This Losing” on YOUTUBE and recalled the way The Calder Quartet filled out that beautiful melody during the song's break.


A new song “All For A Woman,” felt like Jollette paying homage to Bob Dylan. Before doing the song, Harmon switched to electric guitar and Chen switch to electric bass which he played with a pick. The song had a very quiet beginning which intensified and grew louder as it progressed. The band followed with another new song,”A Letter To Georgia,” with Chen this time switching to play arpeggios on the Nord keyboard.
The show started to pull into high gear when the band played “Something New” There was a girl in a white dress who stood up and danced in the front row in front of Jollette. She was later joined by a couple dancing to the left of me who were also in front of the stage. I knew that the point when everyone would stand was coming soon. 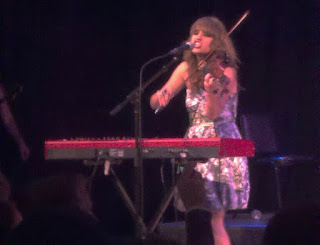 I loved a lot of the new material and I can't wait to hear the new CD. One of the highlights of the show was the song “Half of Something Else.” I loved the way the violins and guitars worked off of each other, rhythmically moving the song along. I also picked up on something in Daren Taylor's drumming that reminded me of Joy Divisions "Love Will Tare Us Apart."  I noticed Taylor's drumming more this time around and I picked up on a feel that was reminiscent of some 80's music.

The moment when everyone stood up came right before intermission. Jollett said “It's really nice being in New York with all of you – I gotta say – after being in the studio for the past 9 months.” He then went into the song “Missy.” From the opening strum, the audience slowly began to rise out of their chairs. “Missy” worked as the show stopper before the intermission.  Jollett went from singing “Missy,” to “I'm On Fire” to “Folsom Prison Blues” back to “Missy.” During the song Jollett said  “A lot of songs are in this key.”

In the spirit of the song “Missy,”  I noted that Anna was her usual playful self. With tambourine in hand she danced around the stage and jumped off a box that was placed in front of The Calder Quartet. Anna is always the best part about seeing Airborne Toxic Event. Besides the fact that she plays a mean fiddle, it's just fun to watch her playful energy on stage.

After the intermission, there were people still coming down the isles. Jollett said  “that's okay we'll wait....and for those of you buying DVDs in the lobby, please continue to do so.....The Rock-n-Roll show is about to begin! - Mr. Chen.” As Jollette sang the song, “Happiness Is Overrated” he pointed the microphone at the crowd who knew all the words.

Basically, the 5 songs after the intermission were Airborne Tox's Greatest Hits, all from their first CD. The crowd was lovin' it and so was the band. By the forth song, I think Jollett got a little too excited. He sprayed water from his Poland Springs bottle over the audience and then with guitar in hand slipped and fell on stage. Besides thinking he broke a rib, he mentioned braking his new guitar. But no worries, Jollett lasted long enough to make it to the encore. 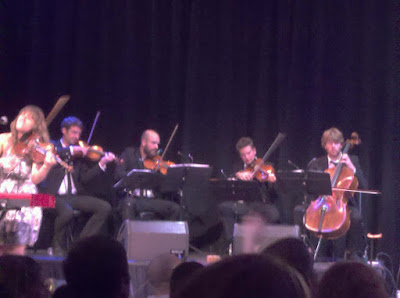 The Calder Quartet came out to play the well know introduction on “Sometime Around Midnight,” which at this point reminds me of my only quibble about Saturday night's show.  I was a little disappointed that The Calder Quartet didn't do one entire piece by themselves. Don't get me wrong, I loved the fullness and the added colors which the quartet gave to Airborne Toxic Event's songs. But since The Calder Quartet were listed on the bill, I was looking forward to hearing something entirely from them.

Apart from the show, there was one annoying thing that kept happening in the audience. Town Hall security kept accusing people of video recording. Most people, like myself, were obeying the signs and not taking any video. However, when audience members were looking at their LCDs to take pictures, security often thought we were video recording because they saw moving images before each click. I missed most of the 13th song because I was in the lobby explaining to security that I was not video recording. I had to show them there was no video on my smart-phone. Luckily, I got back to my seat in time for the last song. I was only inconvenienced for one song. But ironically people still took video recordings from the balcony. I've watched them on YOU TUBE.

Airborne Toxic Event ended their second set with "Innocence." It was epic. It was dramatic. It was a perfect ending to a really good show. 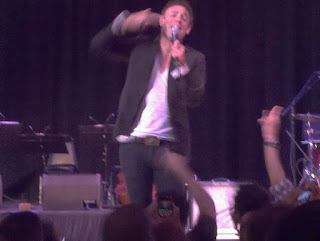 Last week seemed like a monumental week on many fronts.  Wednesday was the beginning of the Jewish holiday Rosh HaShanah.  On the night before, Airborne Toxic Event along with The Calder Quartet played a Synagogue in Washington D.C.   Friday was the end of the Muslim holiday, Ramadan and Saturday was September 11th.  It was 9 years ago when my sister called to tell me something was happening downtown.  The second building hit had already fallen before I got up to the roof of my apartment building.  The first was still standing but I watched it disintegrate before my eyes moments later.  For me, the days that followed were the strangest days and months I have ever experienced.  It felt like New York had suddenly become a war zone.  New York did change in ways but it eventually bounced back to be the vibrant place it was before 9/11.

When Mikel Jollett introduced the encore "All At Once," the title song of Airborne Toxic Event's upcoming CD, I think he had the day in mind.  But I believe he alluded to 9/11 rather than directly referencing it.  He said something about writing the song at a time when he was thinking of the many things people go through in life and how many of us are still here.  As he spoke about the song, I kept wondering if he was going to mention 911. But in retrospect, I think he said just enough.  We all knew what day it was - he didn't have to blatantly acknowledge it.  We celebrated the fact that we made it through with a Rock-n-Roll celebration.

Set list
Musicial Intro by the Calder Quartet
1. Wishing Well
2. This Losing
3. All for A Woman
4. A Letter to Georgia
5.Something New
6. Half of Something Else (new song)
7. Missy / I'm On Fire (Bruce Springsteen Cover)/Folsom Prison Blues (Johnny Cash Cover)
Intermission
8. Happiness is Overrated
9. Gasoline
10.Does This Mean You'r Movin on
11. Papillon
12. Sometime Around Midnight
13. (New Song)
14. Innocence
Encore
15.All At Once (Title song of the Upcoming CD) 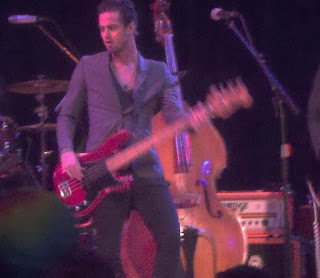 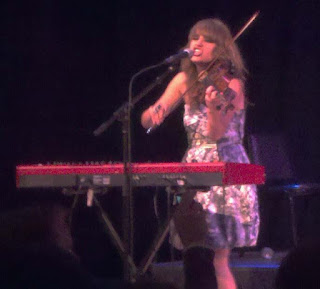 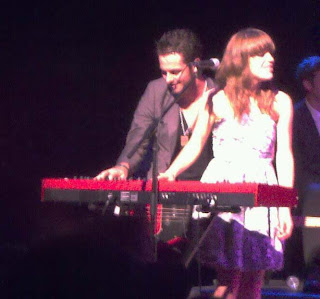 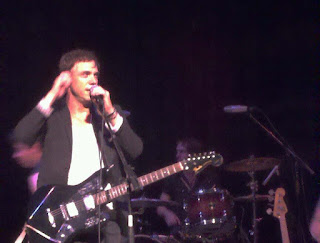 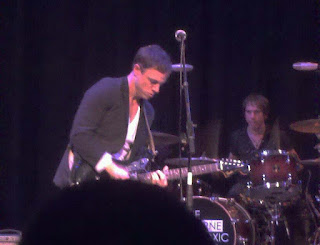 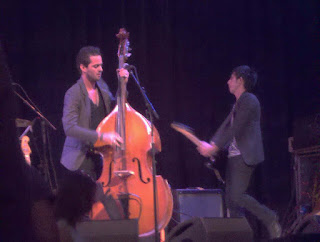 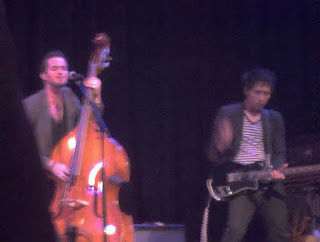 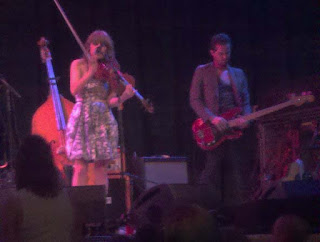 Email ThisBlogThis!Share to TwitterShare to FacebookShare to Pinterest
Labels: Airborne Toxic Event with The Calder Quartet, All Postings