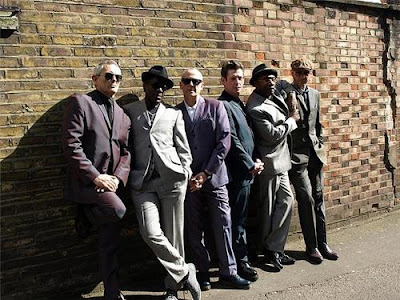 Watching The Specials on Wednesday night, took me back to 1980. It reminded me of dancing in the basement of the original Danceteria on 37th street with my friend Mykel.  At the time, there were four songs that made me run to the dance floor. The first two being “Tourist” and “Damaged Goods” by Gang of Four; the second two being “Concrete Jungle” & “Night Klub” by of course, The Specials. Dancing in the basement of Danceteria was like doing Bikram Yoga in a 105 degree room. The sweat just poured off of me , especially on those evenings when I insisted on wearing my white vinyl snake skin pants. Yes, I was a new wave fashion disaster but that's another story. Wednesday was a very humid night in New York City so it seemed an appropriate night to see The Specials.

When I arrived at the Terminal 5, DJ's Felix Hall (yes, Terry Hall's son) and Trevor Evans were in the sound booth. From my spot in the balcony it looked like Hall was doing most of the record mixing and Evans was doing the toasting, also known as deejaying. ( A monotone like rap which is usually spoken over reggae records.) The reggae music also reminded me of 1980. There was an after hours called Berlin on Houston and Broadway, which I believe had been previously called The Reggae Lounge. I remember showing up at Berlin at 4:30 in the morning buzzed and feeling no pain as they mixed in some reggae music. But even without the booze or the drugs, reggae music still makes me feel like I'm high. It puts me in a sort of mindless state which I haven't achieved yet through meditation (or Oxycontin either).

At about the 9:25 the stage went dark and the song “5446/ Ball & Chain” by Sublime was played over the sound system.  Immediately afterward, a curtain with The Specials logo on it was dropped upstage, behind the drum kit. As the band walked out on stage in the dark, the slower version of “Enjoy Yourself.”was heard over the sound system. The stage lit up and under flashing white flood lights The Specials performed the first song “Do the Dog.”

The first thing I noticed is, after 26 years, the band still has energy. (They also had industrial fans all over the stage for when they get overheated.) Everyone in the band danced through the entire set which was 23 songs. All except Terry Hall who, when the lights came up, walked around stage like a lost angry little boy. I'm not putting him down, that's his stage persona. From the videos I have seen on You Tube, he did the same thing back in the 80's. He was never exactly a dance-ie kind of guy. The guys that did strut around like crazy were Lynval Golding on rhythm guitar and Neville Staple who did toasting as well as background vocals. (The 3 guys I just mentioned later became Fun Boy Three when The Specials broke up.)

During the song “Monkey Man” Staple stood at the edge of the stage teasing the audience with something somebody threw at him. It looked like a bra. Staples and Golding had a routine going on through the show where Staple would ask the audience to hush and Golding would encourage the audience to sing and scream even louder.

Drummer, John Bradbury and bass player, Horace Panter were on WNYC's Soundcheck radio show on Wednesday afternoon. They both said that they were amazed and grateful to be playing to sold out audiences all over the world. It seems wherever they go, Middle aged adults (like me), their children and a new crop of ska lovers showed up to listen to The Specials' music. On Wednesday, those people were exactly who were in the audience. From the balcony, I could see the younger people in front of the stage and a group of boys, with whatever little room they had, slam dancing. (Now you know why Daddy stays in the balcony.) In the back of the room, were the older folk. But no matter how old, young or in between. The packed house was dance, dance, dancing away. Ska music does that to everyone.

The momentum of The Specials set never let up. It grew as they did well known songs like “Gangsters” and “Rat Race.” The horn section didn't come out until they did “Hey Little Rich Girl.” From then on in, there were 3 more guys bopping and dancing on stage. Horace Panter mentioned on Soundcheck that The Specials weren't only influenced by ska and reggae. They were Mods with interests in early sixties pop and R&B. He also said that some members hadn't been into ska until joining the band. I think “..Rich Girl” was an example of what he was talking about.

Terry Hall had little punkesque outbursts, like throwing the boom mic stand across the stage when he didn't need it. But later had a real outburst when some kid in front of the stage threw water at him (or something like that - I didn't see what started the confrontation). Hall said “Jesus Fuckin' Christ – I'm wet. Get that little prick up here so I can kick him in the fuckin' head.” The kid was trying to get up on stage and security bushed him back. I don't think it was intentional but I found it ironic that the next song they did was “Doesn't Make It Alright.”  The prior incident was an example of things that happen live that don't always show up on You Tube.

During “Doesn't Make It Alright” there is a part where where Terry Hall sings “Just because I'm a Black Boy” and Neville Staple, who is black, sings “Just because I'm white.” It reminds me of another thing Horace Panter and John Bradley talked about, which was the 2 Tone record label which came out of the interracial aspect of The Specials and other band's music like The Selector and The (English) Beat.  The music was an interracial amalgam of reggae, punk, pop, rock steady and ska.

One of the songs that made the audience go wild was “Stupid Marriage.” As the audience sang along with, Staple and Golding did their good cop/bad cop routine that I spoke of earlier. I can't say that I was really familiar with the song but I was by the time it ended. The audience joined Hall at the end of it when he sang “Naked Woman, Naked Man, where did you get that nice suntan!” The audience also participated in the clapping on the drum parts of “Concrete Jungle.” Strange thing is Terry Hall, who originally sang the song, walked off stage and left guitarist,Roddy Byers to do the song. They have been doing it that way for most of the tour. Wonder how that came about?

When The Specials did the song “Stereotype” they began with the trumpet playing “First Call” AKA “Call to the Post.” It's the bugle melody played at horse races and is also used by the army to raise and lower the American flag. I mention it because I found it funny – it's not on the original recording. The Specials went directly into the next song “Man at C & A” After the song, Golding said he would like to apologize for having taken 27 years to come back to NYC. Terry said “That's cause Bush was President.” Then they did the song they weren't going to leave out “A Message to you Rudi”

Recently, I watched a four part interview with Terry Hall that someone posted on You Tube. Terry had many interesting things to say. Along with his diatribe on the subject of the band U2, he also mentioned he was bipolar which explains his offbeat personality. I think he was making reference to it and took a political jab before the band went into “Do Nothing.” He said “ I have a split personality, thank god for free health care." ( I'm with you Terry babe, those anti – D's get expensive. You're lucky to live in a place where there is no out of pocket.)

For the song, “Little Bitch,” the audience shouted “one, two” every time it came up during the song. Funny but I kept hearing “Fuck You,”  I think that was the original intention in the writing. The next song, was “Night Klub.” The Specials did a long slow musical introduction before Hall came in with his vocal. Prior to singing the intro, Hall went backstage and came out with some bottled water for the audience. (It's essential that your audience doesn't dehydrate). After the song Hall took off his socks and shoes while stating that his feet are dead. Hall then sang barefoot for “Too Much, Too Young.” Before the closing song, Staple threw the socks into the audience. Hall then said “Those are the last pair of socks I had - what am I going to do now?


The last song was “You're Wondering Now,” which has the appropriate lyric “You're wondering now what to do, now you know this is the end.” There is was a part where the band stopped and let the audience sing it on their own. It was a terrific ending for fantastic show. The Specials came out and did “Ghost Town” and “Enjoy Yourself” as the first encore. My immediate thought was it was an odd choice because both songs are kind of low energy. But it then occurred to me that it made perfect sense. After a set that was so high energy, more high energy material would make the audience not want to go home. But alas,The Specials came back for a second encore; They did "Longshot" and the energy came back up. (So much for assumptive observations.)

As the band finally walked off stage, Golding stayed in the spot light and said "Goodnight New York, we will be back in another 26 years."   I hope not!

Email ThisBlogThis!Share to TwitterShare to FacebookShare to Pinterest
Labels: All Postings, The Specials