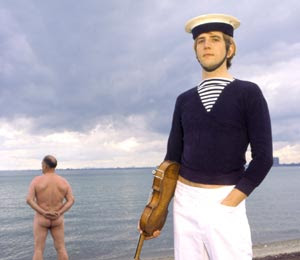 I have been attending various concerts since October of 2009 on a weekly basis. I've been pretty much committed to keeping up with this blog, as well as committed to hearing new music. With that said, I knew there was going to be a night when I rushed out of the apartment and forgot my ticket. That night was Thursday. I rushed my friend Jensen up to Webster Hall's entrance because I didn't want to miss the first band. But once we were there, I realized that I hadn't put my ticket in my wallet. Luckily, Webster Hall is only 3 streets and 4 avenues away from my apartment. Yet I still missed the majority of first band's set. Jensen said they were great!!! - grrrrr........


The Luyas
I believe the Luyas did 6 songs. I walked in at the end of the second to last. My friend said the Owen Pallett had played piano with them for the first two songs. There was a vintage Wurlitzer on stage which I would have liked to have heard him play. C'est la vie. My friend said the french horn sounded really wonderful and he loved the sound of the electric moodswinger, which is an instrument I've never heard (And probably will not get a chance to hear again). The moodswinger is an instrument developed by Yuri Landman and is a kind of reworking of the Japanese koto. (See what I learn doing this blog. Who needs Berkley when you've got Wikipedia!).

I'm not going to say much about Luyas because it's not fair to write about the band on the basis one song. The song I did hear had a punk aesthetic and I did love when she hit the shaker bells against the guitar. The Luyas are Jessie Stein on vocals, guitars and moodswinger, Pietro Amato on french horn, bells and keys, Stefan Schneider on drums and Mathieu Charbonneau playing the Wurlitzer.

Extra Life
I have to be honest. I wasn't getting Extra Life. It felt to me like they are band who hasn't made up their mind which way they want their music to go. That's not a bad thing but it's not always great for an audience to experience.

Extra Life's music definitely included vocals that were akin to Medieval chanting, and at the same time their music had a heavy metal feel. That's not so weird because a lot of metal fans listen to a wide range of classical music and vice versa. The problem is that Extra Life came off sounding like System of the Down doing their hit "Chop Suey," without any sense of humor. I believe they wanted to come off as intense as Nine Inch Nails but it wasn't quite working. The odd time signatures and the quick staccato unison hits did not help to sustain my interest; they felt awkward and too random.

My favorite part of their set was the more acoustic stuff. Songs three and four of their five song set were really wonderful. There were some interesting parts when the violin was playing against the vocal line and also there was a nice interchange between guitar and mandolin. In fact, the musical influences they site on their My Space page such as Bach, Steely Dan, The Cocteau Twins and specifically Scott Walker were much more apparent in those two songs. Extra Life did have some very nice moments. I would like to hear them move in the direction where those nice moments happen more often.

(I was told) When Owen Pallett played with the Luyas for the opening set and while he was setting up the equipment for his set, he wore a black and golden metallic blouse. I say blouse because it looked like something his mother had in her closet since 1983. The guy next to me kept saying to the women with him, "It's not a shirt, it's a blouse." The blouse was so bad that every homosexual in the audience was mentally taking away Owen's gay card. We all sighed with relief when he came out in a black tank to do his set. That metallic number, in front of a somewhat gay audience, would have surely taken their focus completely off the music.

Owen Pallett walked on the stage to the sound of merengue music. The black curtain behind the stage lit up with small lights poking through it which made it look like little stars. Once the merengue music quieted down, Pallett simple said "Hello" and started strumming his violin in what felt like a 3/8 meter. Owen then dropped a note and said "this is harder than it looks." The audience laughed as Pallett returned to strumming the beginning of his song "E is for Estranged." Pallett then looped the strumming, adding a looped bass violin part and then played a melody or at some points an ad-lib.

As on his CD's, both as Owen Pallett and Final Fantasy, Pallett fluctuates between his tenor voice and his falsetto. His live vocals almost always emulate the way his vocals are recorded; that is to say that most of the time his vocals are under the music instead of on top. Often, his high pitched violin completely covers his mid-range vocals. I have asked myself why he performs his songs this way. The answer I come up with is that he wants his vocal melodies to be a part of instead of apart from the music. Once I heard Pallett's vocals as the colors in a painting rather than the subject of a painting, it made total sense.

I don't know if he was nervous or just feeling scattered, but when he started his second song he had to start over again. He said " Ah see, you were talking and I missed the end of the loop." Then he laughed and so did the audience. The song he was about to do was " This is the Dream of Win & Regine" from the CD, "Has A Good Home." It's one of my favorite's from when Pallett was going under the name Final Fantasy.

Pallett went directly from his second to his third song which I didn't know the name of while I was listening to it. When I listed the set list I put a question mark where the third song was supposed to be. I requested that someone leave a comment if they knew the name of the song. NYCTaper kindly responded on this page to tell me the name of the song, which is "Scandal at Parkade." Pallett didn't introduce the song and there was no way to match it against his recordings because it's unreleased. The song is a little more hook oriented than his current crop of material.

Owen Pallett has a habit of saying "Thank you very much" with an upward lilt at the end of each song. After his third song, Pallett made a very funny speech. He said "I know that as residents of New York, you are presented with many opportunities for your entertainment choices. And I am flattered and honored that you decided upon my particular product. As consumers I thank you for your patronage." Owen Pallett has a very warm presence on stage. He can be a bit sarcastic, but he also has a bit of humility. One would think, (or at least I would think) a pop artist with a violin in his hand and complicated lyrics would be affected but Pallett doesn't come off that way at all.

Before moving onto his newer material, percussionist, guitarist and background vocalist, Thomas Gill joined Pallett on stage as he went into "That's When The Audience Died." The song had some very intricate violin patterns. But the part of the song that really stood out was at the end which sounded to me like seagulls overhead (kind of psychedelic).

Opposite Owen Pallett's keyboard was Gill's setup which consisted of an electric guitar, a low sounding tom, a snare, a cymbal and wooden cowbells or wood blocks (it was either or, I couldn't tell which from where I was standing). Through the whole set I don't ever recall Gill using the snare as a snare. Whenever he used it, he used it as a rim shot (tapping on the outer rim of the snare.) Gill played many of parts of Pallett's music which you wouldn't notice being there until seeing someone actually play them. There were many times when Gill was doubling Pallett's violin part on guitar or adding subtle vocal harmonies that one assumes Pallett doubles of himself on his recordings. The songs I'm specifically referring to were "Flare Gun" and "Lewis Takes His Shirt Off.," which is the song Pallett played as the last song of his set.

The second song of Pallett's encore was requested by someone in the audience. It was a cover of Mariah Carey's "Fantasy" which is based on a loop by the Tom Tom Club. The way Pallett captures the song on violin is unique and good fun. I was hoping to hear "Heartland Up Yours" because "Heartland"  is the name of the newest CD.  I missed hearing it but I still completely loved Pallett's set.

Before I close this posting, I have to say that I was a little disappointed that the room was crowded but not sold out. I think Owen Pallett is a talent that deserves a bigger audience. No big deal, I'm not fond of having people standing extremely close to me. The next time Owen Pallett is in town – he's a must see. 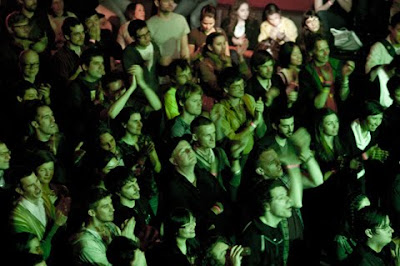 BTW Here's a picture of me, in the audience, standing next to my friend Jon Jensen.  Jensen is the guy with his hands up in the air and what looks like a pink wrist band.   I'm the guy next to him  who looks like he is face to face with God.

Set List
1.E is For Estranged
2.This is the Dream of Win & Regine
3. Scandal in the Parkade
4.That's When The Audience Died
5.Midnight Directives
6.Keep The Dog Quiet
7.The Great Elsewhere
8.Lewis Takes Action
9.Don't stop The Party On My Account (New)
10.He Poos Clouds
11.Flare Gun
12 Butcher
13.Many Lives
14.Lewis Takes Off His Shirt