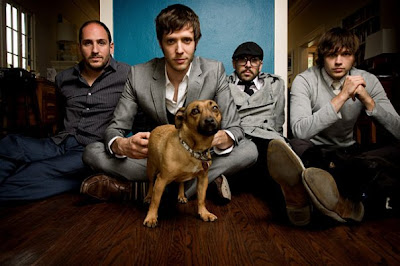 The two opening bands listed on the Bowery Presents website were The Booze and Eytan and the Embassy.   However, something apparently changed from the time the website calender was posted and show.  The bands that actually opened for OK GO were The Tangents and Anamanguchi.  By the time the latter of the two were on stage and doing their set, I figured out that I wasn't seeing the bands that were listed on The Bowery Presents calender.  At the very least, a sign on the door of the MHOW saying the line-up had changed would have been nice.  (Ya think?)

The Tangents were fabu, I really enjoyed their set.  I found their music poppy with an alternative twist.  They also had something I haven't seen in a long time, an identifiable lead guitarist. (Nowadays, many bands seem to have rhythm and lead switch off with each other.)

The song The Tangents opened with was "I Have Love."  It was a cute song with a good hook and driving beat.   I read on the Garage Band.com that The Tangents started out as teenagers.  That young energy is still with them on stage and is part of what makes them so enjoyable.  Lead singer, bassist and speaker for the band, Miles Robbins, can be a lovable dork with a quirky stage presence.  He's says things like "Do you guys like opening bands - I hope you do?   Xander Shepherd seemed to be the control queen in the band or at least that was my impression.  There were three times when Shepherd seemed to look like he was giving Robbins directions between songs. (For all I know he could have been asking "what are we eating after the show? Or did you see the tits on that girl in the front row?)

On the song “Bronx Zoo”, Shepard played a sort Hammond Organ sound on his Nord and Lead Guitarist, Leo Singer took a lead that seemed right out of the 60's. The song “March” sort of seemed a little folksy with it's slower tempo and interesting drum work by Nate Buzzkirk Chumley. (Cool name but I would go with Nathaniel if I were using the two last names,)


I have to give Miles Robbins credit for saying the title of every song, except for the bands 6th and final one which I think was new. I wish other bands would follow suit. If people know names of their favorite songs, they are more likely to download a song on their computer or their Iphone.
Anamanaguchi is described by Wikipedia as chip-tune punk band. Anamanaguchi describe themselves on their web page as making loud fast music with a hacked NES from 1985. I understand what description is but as for the name, I haven't the the fogyish. (Which is a nice way of saying, I haven't got a fuckin' clue). Okay, here's the concept. They play a melody from a hacked and/or programmed NEC (Nintendo Entertainment Center) and a Gameboy. Then they play along with the melody. Basically, Anamanaguchi is a variation of the chiptune bands which use exclusively old video games and computer sounds to make their music.

I thought the concept was a fun version of a jam band. It was kind of like watching the Allman Brothers on speed. I believe the guy who did most of the introducing for Anamanaguchi was songwriter and guitarist Peter Berkman. He was quite a character – where Miles Robins of The Tangent came off a bit dorky, Berkman put the G in geek. On stage he comes off like Shaggy without Scooby-Doo. Berkman made me laugh (I think that was the point). He would describe each song as being emotional but then the NEC would sound and the band was off to the races with another all out jam. One song Berkman described as an emotional epic. All the songs in Anamanaguchi set were instrumental speed jams. The only song that Berkman sang in Anamanaguchi's 9 song set was “Buddy Holly,” by Weezer.

Anamanaguchi is songwriter, guitarist, NES hacker and sometime vocalist,Peter Berkman, with James DeVito on bass, Luke Silas on Drums and Ary Warnaar on guitar as well hacking a Gameboy,

OK GO
Originally, The only songs I knew by OK GO were“Here It Goes Again” and “A Million Ways,”  I'm glad I listened to their music before the show.  I think all their songs have a lot of staying power.  I also like the new album Of the Blue Colour of the Sky.   It's one of those recordings I really like listening all the way through rather than listening to cuts. Also, the new material has an underlying Prince influence on many of the songs, both on the recording and live, it's specifically apparent on the song “White Knuckles.”

Although OK GO were playing in a venue where I usually see indie bands, I would classify OK GO as a rock band. In concert, I found that their was a strong emphasis on entertaining with more than just their music. With all the bells and whistles included in their performance, OK GO seems ready for the a larger concert venue. During the show there were laser lights, live projection, lit clothing and confetti, so much confetti it felt like the Democratic National Convention. There was also an emphasis on presentation. All three front men wore jackets. Guitarist/keyboardist, Andy Ross actually wore a rust colored suit and bassist, Tim Nordwind's suit was pink.


Before OK GO's set, there was a women checking cameras in front of each members place on stage. Some of the cameras were attached to the boom mic stands others were placed on stationary equipment. The band walked on stage at exactly 11PM. As soon as they started their song “Invincible,” red and white confetti started shooting out of the black cone on stage. Lead singer and guitarist, Damian Kulash yelled out “How are you, New York,” during a break in the vocals. Kulash stood in a spread legged rock-n-roll stance as he played guitar. It was something he did several times during the show.

For the second song, “Needing/Getting,” Kulash sang sin guitar while Ross and Nordwind did background vocals. During instrumental breaks Kulash put some kind of toy against the mic which sounded robotic. While the boys were working, the earlier mentioned camera's projected their live images on to the screen behind them for the first time. After the song, Kulash said their were avatars watching the show on the Internet. It was a bit that he did through a lot of the show along with sarcastically and comically saying “We are an enormous rock band.”

Right before doing the “Oh Lately It's So Quiet” Nordwind's amp when out, so Kulash had to kill time while the situation was being addressed. Kulash said “People let's talk.” Kulash than went on to say that the band was recently interviewed by Steven Colbert.   Kulash said that Colbert was “One scarey motherfucker” because he was so intelligent. He then said that they were really lucky and that Colbert was really nice to them.

When I earlier used the expression “Bells and whistles,” at least the bells part was not an exaggeration. To the side of his keyboard, Andy Ross had tubular bells (AKA tubular chimes) which he played on the song “All Is Not Lost.” A real treat came somewhere in the middle of the show. A table was set center stage with different sizes of hand bells. Each member of the band, stood around the table and played the bells. Kulash sang the song, “What To Do,” while he and the other 3 members of the band respectively picked up, rang and put down each bell. After the song, Norwind, Ross and drummer, Dan Konopka walked off stage, leaving Kulash by his lonesome.

Damien Kulash walked out into the audience with his boom mic stand and acoustic guitar in hand to perform the song “Last Leaf.” Kulash is a tall sexy guy. When he stood on a platform in the middle of the audience he did one part of the song facing the left half of the audience and the second part facing the right. It was evident that when his ass was in front of woman's faces they couldn't resist but to cop a feel. I guess one woman stuck her hand to far because at one point Kulash said “that was my balls.”

Once Kulash finished his song the rooms focus automatically went back to the stage. where Konopka was banging out a steady beat. As the band eventually assembled on stage the song turned into the song “Don't Ask Me.” The band had some really rockin' songs left to go. On the song “Back From Kathmandu,” Andy Ross played a double guitar, the top being a regular six string and bottom being a 12 string. Ross also played keyboard. (I wrote in my notes that Andy was a busy boy.) OK GO then did a rowdy cover of the Pixes “Debaser” before ending the show with their own “This Too Shall Pass.” ( It amazes me how many 12 step slogans have become song titles or parts of lyrics.)


Before the band came out for an encore, the audience on the floor was yelling OK GO, GO, GO, GO and the balcony was yelling OK GO!. At one point the balcony and the floor's rhythm seemed to be playing off each other. OK GO came back out and gave us a grand finale. They came out in jackets with lights on the back. The lights circled round and first said 1 2 3 4 and then turned into the words OK GO. Next they picked up feathered guitars that were lit up with neon lights coming from the left hand fretboard. OK GO did the song “ WTF? (Yes, it stands for exactly what you're thinking.) Then we got more confetti for the forth time during the song “Skyscrapers.” The band ended with “Do What You Want.”
I'm sure there are a few hipsters in Williamsburg who might frown at the showiness of OK GO's concert. Fuck em.' The boys played well, the songs were good and the audience had a great time. In the end, that's all that matters.

17.WTF
18.Skyscrapers
19.Do What You Want
Posted by Frank Grimaldi

Email ThisBlogThis!Share to TwitterShare to FacebookShare to Pinterest
Labels: All Postings, OK GO/ The Tangents/ Anamanaguchi