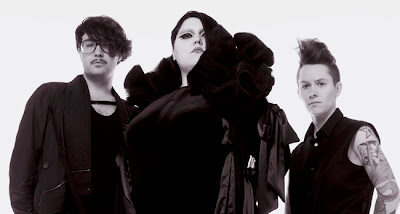 At times, The Phenomenal Hand Clap Band reminded me of bands right out of the 70’s like Chic, Silver Convention and Van McCoy. They even reminded me of Babe Ruth, who was also a band from the 70's that wasn't really recognized till the early 80's for their song “The Mexican.” But mostly I heard Sergio Mendez and Brazil 66' in the vocals. Specifically on the song “You'll Disappear”

Most of the material they performed on Friday night was basically instrumental with the Laura Marin and Joan Tick, doing sparse lyrics. There were two songs, that weren’t instrumentals and I think they were sung by guitarist, Luke O’Malley. Those songs had a late 60's soulful feel, more STAX than Motown.

Rye Rye's set started with the DJ who was playing for her, under a red light shouting “New York City are you ready for Rye, Rye – Make some noise.” Out walked Rye Rye wearing cut off jeans over black leotards, red sneakers and what looked like a leather vest. As soon as her first song “Wassup” started , two dancers in black jackets appeared with Rye Rye printed on (tank) tee shirts. The dancers were krumping away for all of Rye Rye's 8 song set. (I got to learn that shit – I could use to loose 20 lbs!)

Rye Rye's raps were really fast and hard hitting.  As for the beats she was rapping over, they seemed to be mostly jungle. Rye Rye introduced the song “Hardcore Girls” by stating that she knew there were a lot of hardcore girls in the house. She also did a song about weed called “Witch Doctor” where she quoted the Alvin and The Chipmunks song of the same name. The adlibs (which in hiphop means a voice underling the vocal sung in unison) were done by the DJ.

Things slowed down a bit, in terms of tempo, for “Exotic On The Speaker."  Before the song Rye, Rye said “This shit is hard work.” Rye Rye ended her set with by going back to the speedy tempo on “Shake It to the Ground.” All and all, Rye Rye did a pretty good set. She received a good response from an audience which for the most part was boisterous for the entire show.

When the movie Dream Girls was released, I remember having a conversation with my friend Leyden. The gist of the conversation was concerning his disappointment with Jennifer Hudson's delivery of the song “And I Am Telling You I'm Not Going.” Basically, he was accustomed to Jennifer Holiday's all out version in the Broadway show production. Kidding around, Leyden said “ I wanted to see Jennifer Hudson sweat!..I wanted her to give you breast milk!” On Friday night, as I watched the Gossip's vocalist Beth Ditto, I couldn't help but think about that conversation I had with Leyden. Ditto gave the audience vocals filled with heart and soul, with enough breast milk to feed a whole litter of lesbians. (The alliteration fit the occasion perfectly – I had to use it!)

Unexpectedly drag king, Murray Hill showed up to introduce Gossip. Hill pumped up a predominately gay crowd with one-liners like“This is most amount of Trannie's and Queers to travel uptown in years.” Murray Hill kept the jokes coming until he ended with his (her) hands up the air on the word Gossip. The band started playing as Beth Ditto made her diva entrance by starting to sing backstage before walking out.

One thing weight conscientious people always know is not to wear clothing that is too busy or too tight. Especially, if you don't want people to know you are over-weight. In Beth Ditto's case, she wore a patterned garment to remind people that she likes being a big girl. She even belted her leotard outfit to accentuate her enormous breasts. But actually, I liked the whole outfit including her makeup and blunt haircut.

Now, let's talk about Beth Ditto's vocals. She gave a 100% live vocal performance and charmed the audience while doing it. She actually blew me away.  Her vocals have the pitch and timbre of Dolly Parton with the gutsy expression of Alyson Moyet. They are vocals that seem to come naturally. That is the only way I can explain her constant dancing around on stage without being out of breath.

After the first song, Ditto thanked the audience for coming back and then said something like “Let me see – what happened since the last time I saw you. - Oh, I went through a breakup and I got a new girlfriend.” She then walked around asking each band member on stage what they did since the last time the Gossip played New York.

The second song, “Pop Goes The World” was a hoot! Drummer, Hannah Bililie began the intro with a strong powerful beat and guitarist/keyboardist Nathan Brace Paine joined afterward with the main synth pattern for the song. As the song was being set up, Ditto was jumping up and down as if to get herself in gear. As she sang she walked to the edge the stage and asked who wanted to sing, she handed some guy the microphone and he sang a chorus of the song. The audience cheered. The band went directly into the rockin' “Four Letter Word.” It was quite funny to watch Ditto do a 80's new wave bop around the stage as she sang.

At one point, a stage hand came on to fix something having to do with Ditto's mic stand. Ditto told the guy how much she loved him. Then she told the audience how she felt like a lesbian mother with a straight son. At several points, Ditto was being silly and sang “You say potato...”and then had the audience respond but they sang “and I say tomato.” Ditto made fun of the audience for not getting it right. She also had a lot of fun with her band as well. Before the song, "Yesterday's News" she called Bililie a bossy Gemini. Later in the show, Ditto sang “If you're happy and you know it, clap your hands.”

I was quite surprised when Ditto quoted the Bush Tetra's “Too Many Creeps” at the end of Gossip's song  “Don't Make Waves.” There was another song that also had a quote but I didn't catch it. The woman next to me told me what the song was but I could not hear her above the music.

The audience from the beginning to the end of the show was having a good time. Apparently most of them had seen Gossip when they appeared earlier in the year. The audience went especially crazy on “Dime Store Diamond” and “Men in Love.” (My gay brothers and sisters love a good anthem.) Gossip gave the audience everything they wanted but I have to say I would have liked at least one slow ballad in Gossip's set. I think Ditto and company can pull it off but sell themselves short by doing a dance or rock tempo for every song. (In other words, although she gave breast milk – I wanted more - you can never get enough!)

At the end of Gossip's set, Murray Hill came back to egg on a crowd that didn't need any more egging on. They would have been yelling for an encore with or without Murray Hill. But Hill added a fun atmosphere to the evening, so it was all good. As Hill was telling jokes, large lyrics sheet were being taped down to the center stage floor for Beth Ditto to read.

Gossip came back out and did “Pull Up To My Bumper,” by Grace Jones. She introduced the song by saying that she couldn't do the song anywhere close to the original. (Beth...Babe...learning the lyrics might help!) However, it really didn't matter – the song was done in the fun spirit of the show. Members of The Phenomenal Hand Clap Band came out and joined in on singing the chorus with tambourines and shakers in their hands. The show ended with everyone on stage walking off single file and still singing the song until no one was left on stage. The concert included a big girl, a big sound, big lyric sheets and a big finale. Then the big audience went home.  Smiling.

The Gossip are:
Beth Ditto on vocals
Nathan Brace Paine on guitar and keyboards
Hannah Blilie on drums
On tour with the Gossip is bass player Chris Sutton.


Encore
15.Pull Up To My Bumper (Grace Jones Cover)
Posted by Frank Grimaldi