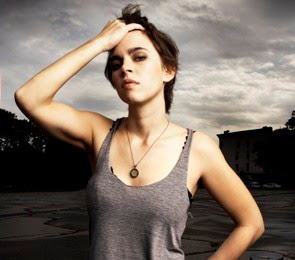 The last time I saw Glass Ghost was opening for White Rabbits. I don't know whether it was my mood that night or if they were having an off night but I couldn't get a handle on them. Their music seemed disjointed and all over the place. However this time around was a completely different story. I enjoyed all their songs and thought they performed a really cohesive set.

The first time I saw Glass Ghost, Dave Sheinkopf  had just joined the band but everything online stated the band was a duo not a trio. (Additional instrumentalists backing a band usually don't share lead vocals.) Therefore, I was confused. This time there were four people on stage with the additional guy front and center. Yet, Glass Ghost's MySpace page has been updated stating the band is now a trio. So, I asked for clarification as the band was taking their equipment out. The answer was that the additional person was Tyler Wood who produced their first CD "Idol Omen." He is not yet a member of the band; he was sitting in on the performance.

Glass Ghost opened up their set with the song "Home for the Holidays." The song was very poppy which I found was the case with most of Glass Ghost's material. As I listened I noticed their melodies are very pop but their arrangements and delivery are not. Mike Johnson sings mostly in a nasal falsetto which is part of Glass Ghost's automatically identifiable sound. Counter to Johnson's vocals are Dave Sheinkopf's who sang lead vocals for 2 of the 7 songs in Glass Ghost's set. I noticed the Sheindkophf phrasing is soulful where as Johnson's is more lilting. very well.

Having seen the band a second time. I feel like I am watching the band grow literally and figuratively. The band is gearing up for a new album release. I'm looking forward to hearing the recording and hopefully within a next year see them perform a full set as headliners. Glass Ghost is Mike Johnson on keyboard and vocals, Eliot Krimsky on drums, Dave Sheinkopf on vocals, bass and keyboard. Sitting in was Tyler Wood on moog and additional drums.

I had the good fortune of hearing, Austrailian duo, An Horse twice. First as the opening band for Kaki King and then, on the following day, as the musical guest on WNYC radio's Soundcheck. Both times were a treat. I am stating the same thing here about An Horse as I wrote on the radio station's blog. An Horse is like watching the White Stripes pulled inside out. Though Kate Cooper's vocals are more like Tegan and Sara's, than anything close to Jack White's, her vocals still hold up against her distorted guitar sound and the fullness of Damon Cox's drumming.

An Horse did most of the material from their current CD, Rearrange Beds. What I first noticed was that despite there being no bass there did seem to be a bottom to Cooper's playing. Perhaps there was a some kind of chorus on her guitar or it was the fact that Cox played a steady kick drum through most of the songs. Maybe, it was both. On the radio show, Cooper said that they were both anti-bass. I would say that's fine because they don't sound like they need one.

Cooper and Cox had some cute banter between songs. They talked about how they traded each others shirts and how Cox had a hole in his shirt under his arm. (Isn't that lovely - I'm glad I wasn't standing next to him after the set.) Cooper stated that she and Kaki King were friends. She also stated how happy she was that Kaki was a few inches shorter than her. (I guess it's the little things in life that matter.) Cooper said she was going to slow down the pace with the song "Little Lungs," but before starting she turned to Cox and said "I'll start and you can come along with me." Cox retorted " No, it's you who is coming along with me." We laughed, they both began the song.

An Horse did a fun set and were a good compliment to both Glass Ghost and Kaki King. Their songs are energetic and playful. They are definitely a crowd pleaser. This is the second time they are touring with Kaki King . I would say that getting to the venue early is worth it.

Kaki King
I'm not sure if Kaki King is one of those performers who stay on stage until she is wiped or if she was just excited about being home performing in Brooklyn. Whatever the case, King did one long ass set. It started at about ten minutes to eleven and ended at around 12:30. Girlfriend definitely has energy!

Kaki King began her set along with Dan Brantigan on trumpet, keys and electronics and Jordan Perlson on drums. From the beginning of the show, watching the 3 musicians made me feel like I was watching more of a jazz trio than a rock band. King and her fellow musicians were more virtuosic than most rock musicians. Though I heard influences from many different genres, including dance, I would have to put King under the heading of progressive rock. Yea, I know, progressive rock is an old fashion heading but the definition fits Kaki King to a tee. Dictionary.com defines progressive rock as a style of rock music that emerged in the 1970s; associated with attempts to combine rock with jazz and other forms; intended for listening.

Kaki King said "Hello Brooklyn - it's good to be here," before launching into her first song "Falling Day," from her new CD Junior. The song seemed like it was completely free form until I recognized the repetition of the title and the line "Everyone comes from somewhere else, everyone stays alone." The haunting vocal reminded of Siouxsie & the Banshees to a backing guitar rhythm that was as hypnotic as it was memorable

The second song was one of my favorites, "Bone Chaos In The Castle," from her CD Dreaming of Revenge. King plays the guitar in a very unique way. The recording of the song is great but watching King play it was amazing. Playing a semi acoustic guitar, King accomplishes playing rhythm and lead at the same time by using both hands to play the fretboard from above while intermittently tapping on guitar's frame.

Most of the material King performed on Thursday night was from the new CD. For the song "Hallucinations from My Poisonous German Street," Kaki placed a steel guitar on her lap and played it using a slide. As indicated by the title of the song I just mentioned, most of Kaki Kings lyrics were dark. One of darkest is another one of my favorites "The Betrayer." The part of the lyric I picked up on was the line "Before you kill somebody, before you kill yourself."

Plunk in the middle of her 17 song set, Brantigan and Perlson walked off stage to leave King by her lonesome. King played 3 instrumentals, I believe one of them was "Playing with Pink Noise." You can see a video of her playing it on You Tube; the video is absolutely amazing to watch.

I have to confess that I did not know I was going to see Kaki King until the day before the show. I usually spend the week before any given show to familiarize myself with the artist's music. I knew some of King's music like "Pull Me Out Alive" and the afore mentioned "...Pink Noise" and "Bones.." But I didn't know all of her material. Therefore, it was hard to recognize her instrumental stuff since there really wasn't a lyric to write down. So, let me just state this - I loved all of Kaki Kings guitar work. The names of the instrumental songs really didn't matter, because I enjoyed watching her in the moment.

The 2 guys returned for "Doing The Wrong Thing" from Kaki's Legs To Make Us Longer CD. The song started out with Kaki playing a sparse guitar melody as Perlson crawled in with brush strokes. The song segued into a double time feel that went through many different sections until working it's way up to a frenzy. Jordan Perlson's drumming was the perfect compliment to Kaki's playing, by always accenting her playing but never overpowering it. Dan Brantigan had some interesting toys that had me intrigued for most of the evening. Notice that I earlier wrote that he played electronics; that's because I don't have a name for the thingy he was playing for most of the show. It seemed to be a wind instrument controller that was run through a sound module and at times a keyboard. The sounds coming from Brantigan's instrument gave a Kaki King's music a full ethereal quality. Later on in the set, Brantigan played an actual trumpet for "Everything Has An Ending, Even Sadness."

When Kaki King returned for her encore, she did 3 more songs - 2 of which were instrumentals. The last instrumental was fun. She ran guitar parts through a pedal sequencer and then added a sort of house beat to it. When she had all the parts down, she jumped off stage stage to dance with audience members. After about 2 minutes, she jumped back on stage played a little more and said goodnight. That was where my end of the evening story began.

As soon as Kaki King walked off stage, I grabbed the set list and left.  As I waited on the Bedford Ave train station there was a very pretty girl, with her friend not far from where I was standing. She was wearing a new red Kaki King hoodie that she just bought at the merch table. When I got on the train, the two sat across from me. The pretty girl with the hoodie whispered to the other "that's the guy who took the set list." She saw that I saw her and we both smiled. She then asked me if I were the culprit who took the set list and I said yes. She asked if she could just look at it and said "please, I won't keep it.....Kaki is my all time favorite...I love her." The girl was young and so cute. I had to be a kindly old man. I knew that I would throw the piece of paper out once I listed the info on my BLOG. On the other hand the red hoddie girl would cherish it and put it on the wall in her room. I took out my phone, took pictures of the set list and gave the set list to her. She went home happy and I went home feeling good.