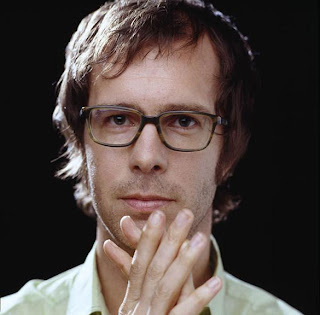 As the opening performer for Ben Folds, Singer /Songwriter, Kate Miller Heidke was a pleasant surprise.  At first I thought, okay another woman with a cutesy little voice like Talyor Swift but when I heard her vocal chops, the comparison changed to someone more like Cindy Lauper.   Heidke's songs are serious, silly and funny.  And her sense of sarcasm (more than irony) was a perfect compliment to Ben Folds.

Heidke did an 8 song set accompanied by Keir Nuttall on acoustic guitar.  I didn't know it while watching the show, but I later read on Wikipedia that Nutall is her husband.  In addition to Nutall's acoustic guitar, Heidke accompanied herself by playing piano on an M-Audio keyboard controller for two songs during the show

Heidke and Nuttall began their set by simply walking on stage and doing the folk ballade, "Our Song."   The following song, "Politics in Space," was a little more aggressive but also folksy as well.  Heidke set up the second song by stating that she wished she had been born in the 60's.

I did some research by looking on You Tube and found that, in the majority of live videos, Kate Miller Heidke works with a band.   Since her and her husband are both from Australia, I am assuming that it is more cost effective at this point to travel as just a duo.  (Also, having a band before Ben Folds solo performance would not have been appropriate.)  Yet, the pared down versions of her songs were conveyed beautifully and with a degree of ingenuity. A wonderful example was "Caught in the Crowd," where Keir Nuttall intermittently whistled the melodic riff that was part of the original recorded arrangement.

Heidke's songs became increasingly more powerful as the set continued and she pulled out a few of the stops with her bag of vocal tricks.  One of those tricks was an operatic voice that she sparingly threw into a few of the songs.  Another was showing off her vocal power by holding a note for a long period of time at the end of a song.

Heidke had some very comical setups for her songs.  She told a story about a Brazilian waxing that she got in Australia which had the audience in stitches.  She also said that the audience in Bridgeport, Connecticut thought that Keir Nuttall looked like Chucky from Rug Rats.   From where I was sitting, I had at first thought that Keir Nuttall  was actually Ben Folds with a wig.  ( I was in the last row in the balcony - so don't take that thought too seriously.)

The two highlights of Kate Miller Heidke's set were "I Love You" and "Are You F**king Kidding Me."  Both had a bar room flavor, comic lines and rubato tempos.  Later on, Ben Folds said that one day he hoped to be opening for Heidke. When the set ended the audience gave Heidke a very strong round of applause.   They really meant it.  Once the night ended, many people were gathered round the Merch table buying her CD.  I don't think I need to write anymore, anyone reading this will easily get the picture.

Ben Folds
Many years ago, I was performing a cover of the song "Sunshine Superman" by Donovan.  Before doing the song, I asked the piano player to "comp."  She asked me what I meant and I stated that I wanted her to improvise a funky rhythmic pattern under my vocal (I even sang one for her).  She said "I'm a piano player not a drummer."   She wasn't Ben Folds either! That piano player came to mind as I watched Ben Folds on Monday night.   Ben Folds played piano and drums, and at times played the piano like drums.  I know he's played one or two Elton John songs in the past, that's because he can.   His piano playing at times is electrically rhythmic just like Elton John's.

Ben Folds walked on stage, positioned himself at the piano and made a thunderous sound by hitting on the lower register of the piano.  Folds then started his set on a light note with the song "Free Coffee." (The recorded version is more forceful because its done with a band.)   Folds made a sad face during the break and the audience laughed.  He went directly into his next song "Annie Waits," the audience clapped on the break each time he played the main musical phrase.  This is the second time I've seen Folds in concert.   Both times I noticed the audience loves to get involved in Folds' set: he often encourages them and sometimes leads them.  Read on, there is more to come on the subject of audience participation.

Ben Folds set up "The Ascent of Stan," stating it was about a bass player he played with in the earlier part of his career.  He said the guy was a hippie and referred to everyone as "dude."   Folds talked about Stan's road rage, making a joke of how Stan's rage was so contradictory to his peace and love hippie image.  Folds' next song was "Sentimental Guy."  The song always reminds me of a cross between Vince Guaraldi's music for the "Peanuts" animation series and the theme for the TV show "Welcome Back Kotter" by John Sebastion.

As a setup Folds talked about how a reviewer from Rolling Stone wrote that "Effington" was a tirade against middle America.   Folds made a snipe at Rolling Stone stating they have great articles but it would be nice if the music critics knew a little about music.  He also did a parody of what his song would be like if he were to write a tirade against middle America.

Without bass, guitar or background vocals, all of Ben Folds' songs really shined. Ben Folds was in voice for the whole Town Hall show.  He was also very laid back, more so than when I previously saw him in concert or when I watched his My Space interactive concert.  I got the feeling Folds wanted the evening to be more about the songs and less about entertaining.  (That's to say it was more show and tell than shtick.)

There were some surprises and never done before moments in the show.  Before Folds played "Time" he said that he had never played the song in concert.  I didn't know that tidbit but it didn't matter, it was beautiful even with his flub on the musical break (He remarked while playing through it - it's not like I would have been aware of the mistake ).   He next went directly into  "Landed" which is one of favorite songs off of "Songs for Silverman."  Another surprise was a new song co-written with novel writer Nick Hornby (High Fidelity, About the Boy and Fever Pitch)  Fold's is working on a whole album with Horby as the lyricist.    The song Ben Folds performed was "Picture Window."

On the song "You Don't Know Me,"  Kate Miller Heidke came back out to share the vocals. Keir Nuttall on acoustic guitar joined in as well .  Kate added a different flavor to the song originally song by Regina Spektor. Kate threw in some of her operatic vocals and held a note for a very long time at the end of the song  (You know what the say, big note - big applause.)


Ben Folds is a snot!!! I say that lovingly.  His sarcastic humor is enjoyed by his audiences and I have to say I like it as well.  For instance,  there were guys in the balcony screaming out "Rock This Bitch."  Folds looked at the audience and said "I wonder if they know it's really not a song."  He then played and ad-libbed lyrics about how people want to hear "Rock This Bitch" but it really isn't a song.   That moment along with the Rolling Stone comment are part of what you can expect from Ben Folds in concert and in some of his songs.

As usual, Ben Folds did songs from his entire catalog.  He went back to songs from the Ben Folds' Five Albums "The Unauthorized Biography of Reinhold Messner" and "Whatever and Amen."  At the end of "Steven's Last Night In Town," which Folds announced prior was in the key of F sharp, Folds began a drum solo as stage hands assembled a drum kit.  They first brought out a tom and then as Folds played on it, they brought out the snare, kick, cymbals and the rest of the kit.  Next, Folds introduced the song "Hiro," which is a bonus track on "Rockin' the Suburbs."  He sang the song as he pounded on the drums up until he dropped a lyric.   Folds continued the song once an audience member helped him to recall the lyric by yelling it out to him. (Yo dude, we all have our senior moments!) It was a very funny moment.


Watching Folds play a Grand Steinway was amazing. It was the first time I got to take in what a great piano player he is, as well as a great songwriter. When he played the musical break on "All U Can Eat," I was in awe. Folds went from sounding classical to blues (pentatonic scale included) to jazz all in one song. The arrangement is on Folds' "SuperSunnySpeedGraphic" album but it seemed much more pronounced in his solo concert.

Folds ended the show with "Not The Same."  Traditionally, he gave each section of the audience their part to sing of the background harmonies.  Folds played the song and cued the audience on when to sing their part.  At the end of the song, he conducted the audience and broke up the part into what sounded like a film soundtrack done by Phillip Glass.  It was a memorable way to end his set. (Even though he's done it many times before, it's memorable when you're actually in the audience.)

There are certain artists I plan on seeing again and again, Ben Folds is one of them.  I love his songs, I love his playing and I love his sense of humor.   The last song of the encore has the line "Kiss my ass goodbye."  Did I say Ben Folds can be a snot? Yup, but it's all good!


Kate Miller-Heidke's Set List
1.Our Song
2.Politics In Space
3.Caught In A Crowd
4.I Love You
5. I Can't Shake
6. Space They Cannot Touch
7.Are You Fucking Kidding Me
8.Words
Posted by Frank Grimaldi