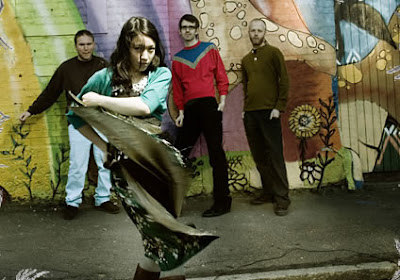 The three bands, that were part of Thursday night's lineup, were from three different European countries.  Though each band covered a different genre, the show was musically held together by a DJ who played between sets.  Musically it worked, sound wise - not so much.  The sound seemed to be set for the DJ and Little Dragon. Therefore. the sound for the first two bands was much more distorted then their music required. The sound was really bad for Oh No Ono but a little better for V.V.Brown.

Oh No Ono are 5 guys out of Denmark.  Their music is very unique and hard to categorize since parts of their songs seemed comparable to many different classic rock sub-genres.  Most of the songs in Ono's set seemed to start in one place and end in another, that was very different from where they started out. Ono's music seemed very psychedelic at times, but at other times it seemed like they were a modern day version of bands like Supertramp, Renaissance or Yes

Even Oh No Ono's dress was kind of quirky.   Their clothing looked like it came straight out of the 80's.   One or two of the members clothing made them look like they were members of Dexy's Midnight Runners.  Their front man, the afro haired Malthe Fischer was wearing a one piece jumpsuit which looked like loosely worn old fashion pajamas.  Their are even pictures of Oh no Ono on internet sites wearing the over-sized multicolored sweaters that women wore in the 80's.

Yes, yes, yes, Oh No Ono were truly a mixed bag   But I did like what I heard through the bad sound on Thursday night.  There were some nice harmonies, good playing and interesting use of prerecorded samples.  I will lookout for them sometime in the future when they are headlining and I don't have to deal with bad sound. Oh No Ono are Malthe Fischer on lead vocals, guitar and samples;  Aske Zidore on guitar, vocals and samples; Kristian Olsen on keyboards; Nis Svoldgaard on bass and Kristoffer Rom on drums.

Immediately after Oh No Ono's set, the DJ returned with Debra Harry's "Rapture."  From that point on the music was a little more upbeat than the downtempo music he was mixing in the beginning of the evening.

As they were setting the stage for V.V. Brown's performance, I noticed that there were many things around where she would be standing at the mic, such as a gong to her right and a tom to her left.  Behind her was a music stand which was used as a table for a marching band mallet, an umbrella, and what looked like a toy melodica (AKA a hooter).  The setup peeked my interest but I knew more would be revealed.

Once V.V. Brown's band finished setting up, they started playing.  Immediately afterward, the lights were lowered, and V.V. Brown walked out for the first song. She was dressed all in black with this really funky headpiece. The front of the headpiece looked like a yellow and silver roman warrior head dress that outlined both sides of her face.  The back of the headpiece was actually a green top hat. (The hat might have been black but may have appeared dark green under the stage lights.)  Just like the artist Mika, who I have also written about, V.V.Brown wore no shoes.

Without a doubt,  I knew from the opening song "Everybody" that Brown was going to do a great set.    Banging on the tom that was set next to her, V.V. was vocally on target and sang with conviction.  As she progressed through her set, I noticed that like Amy Winehouse (or is it Crackhouse?), Brown's sound borrows from the late 50's and early 60's.  To a small degree V.V. Brown even sounded like Winehouse but that's where the comparison ends.   I found V.V. Brown's music to be more rock-n-roll (as in Chuck Berry), a little more soulful and a lot more playful.

The funniest part of Brown's set was the song " I Love You."  She held a Chinese umbrella over her head as she sang the cheesy chorus "..I love you,you, - you, you, you."   Another highlight for me was "Game Over" with its percussive rhythms.  For that song, Brown not only played her tom but played along on one of the drummers cymbals.

Before Brown did her cover of hip-hop artist Drake's, "Best I Ever Had," she made it clear to the audience that, as she put it, she did not like being put in a box.  She said, "I like all kinds of music - folk, classical, rock, r&b etc., "  It kind of felt to me like she was defending the fact she was doing a hip-hop song but she didn't have to; the audience loved it.  We all sang along with her as she repeated the line "you're the fuckin' best" at the end of the song.  (Although I have to admit, it was hard to feel all kumbaya while singing "you're the fuckin' best.")

V.V. Brown ended her set with "Shark In The Water,"  which is the single from her newly released CD "Traveling In the Light."  From what I have read, her CD may be newly released in the States but has already been out in the UK since July.  It's funny, I like all the cuts on V.V. Brown's CD but "Shark.." is the one that I can either take or leave.  Although it may be the "hit," - "Shark In The Water" felt like it was something that should be in the middle of the set rather than the end.  But the audience loved it and was left wanting more.  So it probably was the right choice.

V.V. Brown was backed by a band made up of guitar, bass and drums.   They were really tight and sounded pretty full for a trio.  I unfortunately could not find their names online.  If anyone reads this and knows, please feel free to comment.

Working off of V.V.Brown's set, the DJ played some Michael Jackson than slowly returned to the downtempo sort of mixes.


Little Dragon:
There was a moment I had several years ago in a dance club.  On that particular evening, the club was packed with people dancing their asses off.   I was feeling somewhere between tired and tipsy as I watched the crowd .  The music the DJ was playing was really thumping with a subsonic bass that made everything vibrate.   As I stood there feeling no pain, I  thought if a bomb should drop on New York City, there is no place I would rather be.  While listening to Little Dragon perform, I euphorically recalled that moment.

Little Dragon opened up their set with "A New" which is the opening cut of their most recent CD "Machine Dreams."   As an aside, there seems to be a small change in direction because the recent CD's lyrics are sparse compared to the one prior.  As the long wobbly synth line played, 3 of the band members walked on stage and started to play.  Then out walked Yukimi Nagano wearing a longish flowing yellow, pale green and beige dress over a black dance unitard.   On her head, she wore a black hood which she later took off to reveal her short boyish haircut and the silver ornamental piece at the top of her dress.  She sang as she played on a wooden cowbell.

There was a guy who sat at my balcony table who said that he had heard Little Dragon far surpassed what they sounded like on CD.  He was right, the CD is more of listening experience where live is more of a dance. That is to say the feel was much more upbeat. As he later danced with his girlfriend, the guy  called out song names whenever he saw I had a bewildered look on my face,. (Thanks - Dude!)

Dragon moved into "Test" which picked up the tempo with it's electronic reggae feel.  Yukimi continue to play the cowbell and also hit the 3 oriental gongs to her right.  Fredrick Källgren Wallin, played subsonic basslines which gave the song that dub sound (emphasis on drum and bass).  One interesting thing was that Fredrick moved between traditional electric bass and playing bass on a keyboard controller.  I first noticed him playing bass on the controller during "Never, Never" and then moving back to bass guitar on "After The Rain."

Yukimi Nagano vocals are soulful with a vocal timbre that is similar to but stylistically different from Erykah Badu . As a stage presence, Nagano was seriously wonderful to watch.   Maybe it's just me but there was a uniqueness and charisma that kept me watching.  She was energetic, funky and graceful all at the same time.   Unlike most singers, she held a racket tambourine instead of a traditional one.   Yes, the instrument does have the shape of a tennis racket but in Nagano's hands it looks exotic. There was also a point when she played with a thin scarf over her head and around her neck. The lightness of the scarf captured the title of the song, which was "Feather."

All of Nagano's dancing completely offset Håkan Wirenstrand stoic persona behind the keyboards. Wirenstrand with red hair and a beard, which is even longer than in the above picture, looked like a ship's captain.   In some ways he was exactly that  - the person at the helm.   While drum and bass may be at the heart of Little Dragon's sound, it was apparent that all the nuances, large and small were coming form Wirenstrand.  During "Blinking Pigs"  there were a large variety of sounds. Some were similar to putting ones ear to a seashell or the bell from a clock tower; other sounds were more melodic or chordal, like the low volume tinkling bell sounds or synth pads that came and went.  By the way, at the end of "Blinking Pigs" Nagano and bassist Wallin both walked over to opposite sides of the drum set and hit on the drummers cymbals.

I think I have stated it before but it warrants repeating.  A drummer can make or break a band, especially when the band is only 3 pieces.  There is more space to fill or appropriately not fill depending on the song.  Erik Bodin is a wonderful drummer.  His drumming went from mid-tempo dance to jungle to intricately accenting the vocal.  Little Dragon did  a new song "Stranger," during which Bodin's echoed snares sounded to me like waves hitting the shore.

During "My Step," I looked around. Everyone on my side of the balcony and on the main floor seemed to be dancing.  I was bopping in my seat, while I enjoyed looking at the crowd having a good time. Yukimi Nagano was having a good time as well.  She walked to the end of the stage while dancing and gave a audience member a high five.  The momentum from "My Step" slowly grew from that point in the set, up until and including the song "Roundabout."

Little Dragon's set ended with "Twice," which broke the dance mood but felt appropriate as an ending.  The song has a soothingly meditative feeling.  Its pensive piano ostinato rocking between the tonic and the note a fifth below, brings an image to mind of a ship disappearing slowly over the horizon at sunset.

Little Dragon returned for an encore, but it seemed as if they had planned to do only one song.   However, I think Nagano saw that the audience was into it and wanted to dance some more.    So, Nagano said "okay we'll give you one more."  Little Dragon's last encore was "Swimming."