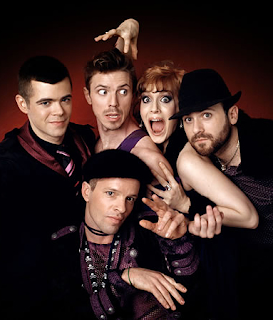 I have heard many contemporary bands influenced by their parents 70's record collection.  But the Scissor Sisters are the only band that capture the overall sound of 70's music.  Since I graduated from high school in 1975, and it is albeit my opinion,  I feel confident enough to make that statement.  Scissor Sisters music reminds me of pop recordings from Leo Sayer, Elton John, The Bee Gees, Queen and Sweet.  Their sound makes me feel like I'm listening to radio station WPLJ in 70's (sin Boston, Styx or Journey).

The tickets for Wednesday and Thursday night's show were sold out as soon as they became available.  However, I've been doing this long enough to know that there is always someone willing to unload a ticket at close to cost on the day of the show.   I was able to get into the Bowery Ballroom 10 minutes before the show started, to take my place against the east wall.  (It's too difficult to stand in the middle of a room with paper and pencil taking notes.)

At exactly 10:03 Babbydaddy, Del Marquis and Randy Real walked on stage along with the two female background singers who stood to the left of the drum kit and keyboard player, John Garden who stood to the right.  Making their grand entrance a minute or two later were Jake Spears and Ana Matronic.  From where I was standing, Ana Matronic looked like Julianne Moore.  Ana wore a dark fuchsia dress with her hair slicked back and worn to one side.  As for Jake, it was all about showing off his banging body and his pecks. The adage "If you got it, flaunt it" was never more true than with Jake Spears.  There is a lot of T & A in a Scissor Sisters performance but it comes mostly from Jake.  His little outfit of leather and mesh served up ass, crotch and of course those pecks!   Don't get me wrong, Ana is sexy but as we would say in Brooklyn "she's rah-find."

From the beginning song, "Night Work," it was evident that Wednesday's show was going to be about the new material.  It's not like I'm buds with the band, but I do suspect they are about to go on tour.  I have read that they will be at SXSW on March 20th.  (South by Southwest Music Conference in Austin, Texas).  The Scissor Sisters did only 5 songs from their 2 albums but it was enough to keep the audience excited and tuned in to the new material.

As Del played the opening riff to the second song of the evening "She's My Man," the audience cheered and readied themselves to sing along.  Between songs, Ana did most of the talking and started by chatting up the audience before going into "Laura."   She said that the band was so fuckin' glad to be back performing in New York.    She then continued by rambling on about seeing a lot of old faces but many new ones as well and attributed it to the fact that some may be post-op.  She ended by saying something like - you can meet with her, by the upstairs bar after the show and she will toast to your gender reassignment.  (I'm paraphrasing but that's the jist of the song setup).

One of the new songs that got the audience going and clapping along was "Any Which Way."   When Jake, Ana and the background girls sang  "Oh - Oh - Oh,"  I got that  "Ah - Ah - Ah - Ah " Bee Gees "Staying Alive" feeling.  Then when Jake stuck his butt out on the line " Sting me like a bee,"  I got another feeling but I won't go there.  The next song " Something Like This"  had a  rock beat.    Jake and Ana started doing robot moves in the beginning of the song.  Then Del joined in and all three did a mechanical sort of movement by repeatedly turning to the left then almost forward with their right arms jutting out. It was kind of cute. (You had to be there).

Sandra Bernhart walked on stage once "Tits on the Radio" began to play.  With long curly hair and a short black dress, Sandra sang and moved along with Ana and Jake.  Sandra looked tall and must have been wearing heals because she seemed like she was towering over both Jake and Ana.  It was a surprise to see Sandra Bernhart on stage and it may be something fans might mention in a conversation,  but other than that the moment wasn't anything special.

Speaking of special, I usually sit at a balcony table to inconspicuously take notes.  But alas, I'm not a VIP and had to stand against a wall on the main floor.  Therefore, my gay brothers felt compelled to ask what I was writing for and to offer some input.   (Note: No need for gaydar they were standing with their dates and/or boyfriends).  The adorable blond boy next to me felt that the band's focus should be on Jake with less focus on Ana Matronic.  He then took it back and said he was only kidding.   The guy on the other side of me,  joked around by saying Scissors Sisters were lip syncing.  At the end of the show, a third guy popped out of the crowd and felt that it was his duty to tell me that Lou Reed was sitting in the balcony.  I guess he missed Amanda Lepore, who was standing in the balcony directly above me.  (BTW - Boys, if you reading this, thanks for the help - I love a good group effort.)

Another new song was "Running Out."  Del Marquis played his guitar with a bow for part of the song.   Using a bow seems to be in vogue with guitar and bass players as a cool thing to do.  I have seen it done quite a few times in the past several months.   "Running Out" must have reminded the guy, who made the lip syncing comment, of a Ukrainian Jig. (Maybe Hava Nigila?)  He kept singing "hey" on the downbeats. I was amused but only vaguely heard what he was hearing.

I spent the beginning part of the show thinking that as a singer Jake Shears was just okay.  His voice  sounded kind of thin and his falsetto was often underlined by Ana and the two background vocalists.  I can honestly state that I changed my mind as the show progressed.  By the time Jake sang the new song "Fire." in full voice I was totally convinced he had vocal chops.  For me, "Fire" was one of the show highlights.  I look forward to hearing it on the upcoming CD.  (BTW - The CD was supposed to be out already - I wonder what's up with that!).

Once the new CD is out, I think Scissor Sisters fans will  be loving it big time.  The new song "Nightlife" sounded very B52's to me.   During the song Scissor Sisters sang "Who Who" like the sound from a steam train engine - it was very disco.  (Depending on how you heard it - it could have also sounded like Steve Millers "Take the Money and Run").  The song "Numb" had a heavy back beat and a sequencer creating a rhythm that sounded very Giorgio Moroder.   I think somewhere along the line, the Scissor Sisters quoted part of "Comfortably Numb," but I missed it.  (There are times when I get distracted easily).  I also missed seeing Alan Cummings in the audience as well.
But then again, this BLOG is not meant to be gossip column.

The last song was "Invisible Light" which I believe is also the name of Scissor Sisters' upcoming CD.   The song sort of had a house dance feel to it with heavy kick which Randy Real took his drum solo over at the end of the song.  Jake began the song in his lower register.  At some point before the solo, Jake and Ana walked off stage holding hands.  Jake and Ana returned later in the song.  This time, Jake was wearing what looked like a shiny vinyl raincoat. There was a lot happening in this one song.  The last thing, I will mention, is that there was a Vincent Price sounding voice over that sounded a lot like the one on Michael Jackson's "Thriller."

Scissors Sisters did the obligatory encore by performing "Simply Gorgeous."  Babydaddy played keys, Ana rapped  and the audience sang.  The show ended with bows and thank yous.  Then I walked out onto the street with a smile on my face singing "She's My Man" most of the walk home.

You can see some wonderful pictures of the show by going to the following address:


The Scissor Sisters are:
Jack Shears on vocals
Ana Matronic on vocals
Babydaddy on bass, guitar and keyboard
Del Marquis on guitar
Rand Real on drums

(Yes, the above are stage names - if you want real names try Wikipedia)

Email ThisBlogThis!Share to TwitterShare to FacebookShare to Pinterest
Labels: All Postings, Scissor Sisters