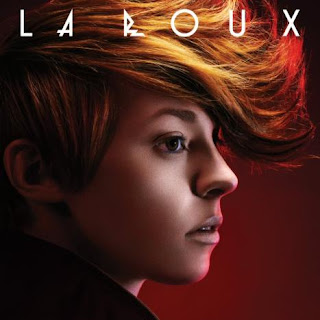 I arrived outside Webster Hall at about twenty minutes to eight.  As I waited in line for the usual ID check, I noticed there were many young concert goers who either forgot their ID or were under 21.   The doorman marked all those concert goers with a big black X on the outside of both hands.   Judging from the marker, those who were branded may now be candidates for cancer . Hmmm...I guess wrist bands alone aren't working.

As the sold out audience gathered inside Webster Hall, I noticed the crowd was extremely mixed.  There were smatterings of girly-bois, club kids, hipsters and boy-girl couples. It also seemed like a good percentage of the crowd were young girls and gay men.

Opening up there set with the song "Call My Name," Yes Giantess got right down to business and kept the pace going for 7 songs.   During the first song Chase Nichol, a new addition to the band,  took a very tasty guitar solo.  Aside from fitting in really well, the solo seemed a bit jazzy.  To the side of Nicholl's was a Yamaha DX7 which he later played during "The Ruins."  I haven't seen a DX7 since the 80's,   I'm sure there were other vintage keyboards on stage but the DX7 stuck out as the one with which I'm most familiar.

As the band's frontman, Jan Rosenfeld energetically kept switching between a stand alone mic and a small keyboard to his right.   Jan looks really comfortable on stage, which makes him enjoyable to watch.  He's a bit of a smart ass, somewhat goofy and kind of sexy.  Through all of Yes Giantess' set, Jan hyper-actively danced center stage   Whenever Jan played the keyboard, he hunched over it while bopping back and forth. (It seems like something many keyboard players do nowadays. I guess it's like when guitarist used to do guitar face, in 60's & 70's, while taking solos,)

Before doing the song "Can't Help It," Jan accidentally hit himself on the mouth with is own mic .   He flinch, laughed and then made fun of himself for being such a nerd.  In most shows I've recently seen , the frontman usually ends up doing additional percussion.  Yes Giantess is no exception,  during "Demon,"  Jan played on agogo bells which sound like a higher pitched cowbell.

Yes Giantess has been compared to Passion Pilot but there are differences.   Unlike Michael Angelokas who mostly sings in falsetto, Jan Anderson sings high notes mostly in full voice with a bit of lilt.   Giantess' material doesn't seem as hook oriented as Pilot's.   Only two out of the Seven songs Yes Giantess performed had noticeable hooks.

Yes Giantess ended there set with Jan suddenly asking a girl what her sign was and then said "I'm a Capricorn, it's not gonna work."  The non-sequitur almost seemed like a cue for their last song to begin.  (Now, you know what I mean by my smartass comment.)

There is a lot of good stuff happening in Yes Giantess'  music.  Most of the music they did in concert can be found on various Internet websites.  Yes Giantess is working on an album.     I'm looking foward to seeing them headline and do a full set once their recording is finished.

La Roux hit the stage at about 9 o'clock.  The Hall went dark and we all heard the thumping sound of a kick drum.   The words La Roux moved across the back light panels set up against the wall behind the band.  The trio, playing  parts conceived by the invisible Ben Langmaid, walked on stage and started to play "Tigerlilly."  Elly Jackson walked out singing.  (It's all about the entrance, baby - it's all about the entrance!).

Esthetically the whole presentation was very 80's, from including the way the band was set up, down to Elly Jackson's androgynous rockabilly outfit.    On keyboards and background vocals,  Mickey O'Brien's keyboard was on a kind of speaker's podium with the La Roux silhouette medallion on the front panel.  The drummer, William Bowerman, had a full electronic drum kit on one side of the stage. On the opposite side of the stage was Michael Norris on keyboards, who by way is also referred to as Mickey.

In the middle, stood Elly Jackson AKA La Roux with her flowing upward red quiff.   She looked very smart, dressed in a bronze and gold tuxedo jacket over black skinny jeans and a tee shirt.  The shoes were brownish and gold men's loafers to match the jacket.   She also wore a big gold chain around her neck with the La Roux medallion.

In a lot of ways, it feels to me like La Roux is a packaged product.  Yet packaging doesn't bother me because the product, Elly's voice and La Roux's writing are damn good.  On stage, Elly is constantly moving and it's amazing that she can continue to sing.  Elly's alto voice is unique, it has an  crying quality that is extremely powerful and expressive.
I did sense that I was hearing prerecorded voices but it seems that they were only used as background or at times to fill out her sound.  At many points in the set, one specific point being the song "Colorless Color," Elly departed from the original melody as the barely audible background vocals were heard.  Therefore, I want to make it clear, Elly was really singing. (It should also be noted that O'Brien was doing background vocals as well.)

As far as stage presence goes, Elly was very warm and not afraid to stand at the end of the stage, which she did throughout La Roux's set.   After the first song, Elly asked who in the audience was at her last NY show.  When many people raised their hands, Elly said she was really grateful for their kindness and admitted that she was awfully sick the last time she performed in NY.  Elly also did a cutesy thing when she ended the song "Quicksand." by changing the last line of the song to "I'm in New York."


La Roux did almost the same set in New York as she did in Quebec on February 3rd.  The difference, between the two, was that in New York she substituted "As If By Magic" with "Under My Thumb." She announced "Under My Thumb." as a song by the Rolling Stones and as one of her all time favorites.  (Of course, being two generations older I was the only one in front of the stage singing along.)   I noticed, as I'm sure many others did, that she sang the lyric as written and did not change the pronouns.   I don't think it implies anything other then she might not have wanted to kill or change the rhyme scheme. After the song finished she offhandedly said "I don't care if you don't like it, I loved it." I liked the arrangement - I thought it worked.

La Roux and the trio behind her ended the set on the song " Fascination."   When the song ended all four people ran off stage.   The crowd went crazy and really made sure they were going to get an encore.  But in the same respect, La Roux made the audience work for it and took awhile to come back.  Elly came out wearing a military jacket this time around and once again she made her entrance singing.  The encore was, of course La Roux's hit "Bulletproof."  The crowd went crazy as the band gave it there all.  Elly Jackson played one of the electronic snares on the song's break and did the same two step she did through most of the show.


I enjoyed La Roux, but would have liked to have seen Elly Jackson interact with the band a little more.  At times it seemed that the trio were just there as something more to look at.   But with that said, I think La Roux or Elly Jackson are going to be around for awhile and may even have the longevity of Depeche Mode.  (Oh God - that means a pricey ticket; I hope I can get comps.)

La Roux in the Studio is Ben Langmaid and Elly Jackson.