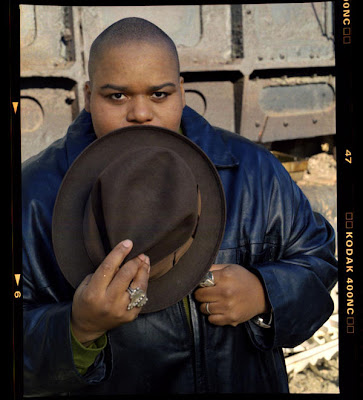 It's nice to see musicians who let the music move through them. It's nice to see a band that looks out into the audience and genuinely smiles. It's nice to see the leader of that band make the audience feel like they are in their living room but she is always in control. Nice is too small an adjective to describe Toshi Reagon and Big Lovely's performance on Thursday night. (but hey!, I was on a roll.) Better words would be heartwarming, moving and musically rich.

I had heard Toshi Reagon's name mentioned by musician friends through the years but I had never heard her music. So, when I saw her gig listed on the site for Joe's Pub, I knew it was time to check her out. I started by listening to her music online. My first thoughts were that her songs were really well written and that there is a 60's and 70's sensibility. The songwriting and her music itself reminds me of Bill Withers, Joan Armatrading, and Janis Ian with a touch of Beatles thrown in. However, the strength of her music lies in her live performance.

Toshi Reagon's show was billed as her 25th Anniversary Birthday Concert. But what I didn't know was that her birthday concerts were a tradition at Joe's Pub for most, if not all, of those 25 years. Needless to say, the audience had seen her many times before and knew it was a special night. Toshi Reagon's friends and family were there but so were newbies like myself.

Toshi Reagon and Big Lovely eased into the opening song “Burden Down.” Along with Toshi, her three accompanying vocalists Gina, Marcelle and Judith gave the song it's rich gospel feel. During the song, and in other parts of the show, Marcelle Davies Lashley played tambourine and Judith Casselberry played guitar. Along with Gina Breedlove, the three ladies were enjoyable to watch because each had their own distinctive personality. Together with or backing Toshi, the three ladies voices worked as one unit making beautiful harmonies throughout the show.

Many of Toshi Reagon's songs made me and the audience want to sing along. There was honestly one point when I was singing along and I wasn't even aware I was doing it. This compulsion to sing along started early on during the show; even Toshi's mother was feeling it. When the band finished the folk song “There and Back Again,” Toshi's mom called out for the band to play the chorus again so she and the people at her table could sing along. Toshi complied, we all sang along.

Starting with the song “Little Light” and through several of the following songs, I picked up on the dynamics in Toshi Reagon's performance. She could go from a very quite feel, of just her and the acoustic guitar, to an all out funky blues with the band in toe. A song that really brought out the interesting quality of her vocals was “Sweet in the Morning.” Haunting guitar and the India like vocal give the song a sort of 60's psychedelic feel. In concert, Toshi softly elongated the notes making them even more interesting than on the recording. “Sweet..” is essentially a blues but I wasn't getting that until I heard the lyric “Baby don't ya be no back door man” and then heard Adam Widoff 's gritty electric guitar solo on the break.

Toshi had some funny stories and some fun interaction with audience. One such story, was the one she told to set up her song “Building Blues.” She visually described what it was like to live in a slanted brownstone house on Underhill Ave in Brooklyn. She also made a joke about how she loves playing quiet because she can hear the people who are talking through her set and it's usually her friends. Then there was the man who bought a ticket to the show on a whim not knowing Toshi's music at all. When I looked across the room I could tell he was feeling it. Toshi made reference to him several times. Somewhere midway through the show, the man was unbuttoning his dress shirt and dancing in the isle. (It sounds more risque than it actually was because he was wearing a beige T-shirt underneath)

Behind the four ladies who were seated down stage, was a male trio made up of bass, drums and guitar. Bass player Fred Cash along with drummer Robert Burke gave Toshi's music a strong and solid foundation. At times, Burke's drumming added interesting elements such as the upbeat rhythmic pattern he played against the sad lyric in the song “Life Is Just A Book.” But it is important to note that no matter how intricate or subtle, his playing was consistent for all of Toshi's material. Bassist, Fred Cash took two solos during the evening. There was the one solo where he funked out and a smooth melodious solo on the song “You Oughta Know.” Adam Widoff also took a few solos besides the one I mentioned there was a slamin' guitar lead that included a wha wha pedal on “Show Me.”

The show had many surprises. One of them was during the song “Scorpio.” The ladies got up from their chairs and danced around while Judith Cassilberry delivered a sort of Jamican-style rap ala Shaggy. At that point, lots of people in audience cheered her on and some stood as well. One of my favorite songs, was “I Hate – I Love.” It's obviously one of the audience favorites as well because Toshi saved it for the last part of the set. But on Thursday night the setup introduction was as important as the song. Long story short, Toshi feels that our mainly Democratic Congress should give Obama some slack. (I feel the same way but I won't go there. This BLOG is about music not politics.) She basically said she wished she could imprint her song on Obama's brain. The hook of the song is “I hate (4x),when it's tragic – I love (4x), when it's my way.”

For the encore Toshi Reagon called up, an original member of Big Lovely, Catherine Russell. As Catherine sat down to perform with Toshi. Drummer Robert "Chicken" Burke said “I know what's comin.” Which I interpreted as it was a song they had done before and that it was going to be something special. Sitting side by side, Toshi and Catherine sang “Darling.” Through the song they each traded off a verse but when they harmonized together it was truly magical. Adam Widoff felt all warm and fuzzy because that's what the grin on his face was definitely conveying. Catherine stayed on stage as the band finished their encore on a high note with “Kindness.”

Hmmm....kindness. There was a portion of the show where Toshi mentioned how you can see whether a persons soul is good or bad by what they do. Well, then everyone at Joe's Pub who spent an hour with Toshi Reagon and Big Lovely definitely saw their souls....and it was all good.

Email ThisBlogThis!Share to TwitterShare to FacebookShare to Pinterest
Labels: All Postings, Toshi Reagon and Big Lovely