I arrived at Gramercy on Tuesday at approximately 7:45.  At that point in the evening, there were at most 50 people in the Theater which made it feel empty.  When Outasight performed fifteen minutes later, the room hadn't much improved.  I guess everyone expected Daniel Merriweather to hit the stage at 9 o'clock since he was the only one listed on the bill.

Despite the very small audience, in a large house, HipHop-Soul Artist Outsight and his backing DJ 6th Sense held their own. (Since Outsight had some HipHop stances you can take that literally - pun intended).   6th Sense came on stage first to introduce "Mr. Outsight!" who then walked out on stage. Outsight opened his set with the song "Don't Say Anything,"  basically rapping on the verses and singing the choruses.  Behind him 6th Sense, who Outasight kept referring to as his band, not only handled his beats but also did the ad-libs.

From the moment he got on stage, Outasight acted like a seasoned performer even asking the audience who were sitting in the balcony to join him by standing in front of the stage.  A large percentage of the patrons listened and stood in front of the stage giving him their undivided attention.  Outasight had good rapport with the small audience which isn't always easy.  He and 6th Sense got the audience to clap, sing along and respond to general questions.

Outsight wore black eyeglasses along with a shirt and tie under a cardigan sweater. Outsight looks nerdy like Rivers Cuomo but moves and acts like Kanye West.   However, unlike Kanye,  Outsight sings as good as he raps.  Outsight only did 5 songs which included the funny "Ode to Getting Laid" and "Brand New Day,"  It's a sin that he wasn't listed in the bill.  The larger audience missed a real treat. 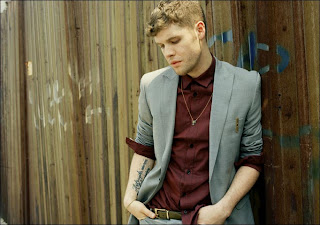 I got the impression that Daniel Merriweather was not feeling well for his performance on Wednesday night. The reason I got that impression was his set was about a half hour later than expected, he did not do an encore and during his set he kept making reference to cough syrup in his glass. If I'm right, hats off to him for getting on stage and skillfully delivering 13 songs. He sounded fantastic!!!

In a black double-breasted suit and white shirt, Daniel Merriweather stood in front of his 4 piece band.  As if welcoming the crowd, he started by singing the opening words "New York." from the song "For Your Money,"   The song, an extremely soulful ballade, continued with guitarist Tim Van Der Kuil's crisply cranking out the same solo as on Daniel Merriweather's upcoming CD Love and War.

After Merriweather introduced "Chainsaw" as a song about drinking, keyboard player Barney McAll took over the instrumentation with a brilliant organ part at the beginning of the song.  It was on this song that I noticed 2 interesting elements of Daniel Merriweather's voice.  The first was his kind of Ray Charles raspy howl and the second was the way he approached his lower register sounding like Sarah Vaughan.

Merriweather had many brilliant musical moments but the one I wasn't too fond of was his whistle during the song "Change," which was used to replace the rap.  I would have perferred to hear him scat, or have one of the instrumentalist take solos, or even have his opening act do the rapping.

I was a little surprised to find that Daniel Merriweather's taste in music leans more toward the Rock world than the R&B world.  (Though in many ways they are part of the same sphere.) (Maybe I shouldn't be surprised - it looks like dividing lines have definitely changed. I recently saw Justin Timberlake perform Buckley's arrangement of Leonard Cohen's "Hallelujah.")   His musical leanings are apparent - the cover songs he chose were by The White Stripes, The Smiths and Paul McCartney.    It seems Merriweather has made a choice not to delegate himself to one musical style at this point in his career.

A really wonderful song in the show was performed with only McCall on piano (Nord keyboard patch).  Without really saying so, before doing the song, he intimated the song was about a friend's addiction. The song, "Live By Night," was the point in the show where Merriweather's soulfull bluesy voice was especially apparent.  But then again, his voice shined through all of the show.  What I noted particularly was that Merriweather did not have anyone doing the background vocals.  For me, that worked in his favor showing that his vocals were strong enough to carry his material.

On the song "Everything Away For Free," guitarist Van Der Kuil returned to the stage but this time playing acoustic guitar.   Instead of getting behind his drum kit, drummer Bloxsom tapped out a steady beat on the box that he seated himself on.  The box like instrument is afro-cuban &/or peruvian and known as the cajon. As both musicians played underneath his intro, Merrieweather said the song was about unrequited love.  The song was good transition to back to having the full band and to the rest of his set.

I think the coolest and most accessible song of the evening was "I Think I'm In Love With Her."  The song involved audience participation and a rap like stanza which Merriweather vamped out on at the end of the song.  The song had a rhythmic pop feel and a built in ambivalence in the lyric which I liked.

From what I have read Merriweather did the same set in LA.  The only difference was that his last song "Red" was treated as the encore instead of the last song of the show.  Same difference. I enjoyed Daniel Merriweather.  I would like to see him again once his CD is officially released and he's done more touring.