On Sunday night, all three bands on the bill musically complimented each other.  During White Rabbits' set,  Stephen Patterson told the audience that all 3 bands were friends who knew each other well.  Though each band had their own sound and personality,  they shared common elements .   One of the most prominent elements they shared was that each band had a tom or set of toms being played in addition to the traditional drummer.   I'm starting to wonder if I am,  just recently,  picking up on a trend that has been going on for awhile.   When I saw the California based band Local Natives in October - it was the first time I saw this trend.  I'm going to keep watching for it in the future.

When I arrived at the Bowery Ballroom, a  live recording of Elvis Costello and the Attractions was playing over the sound system.  At about 8:30, Caveman came on stage to do 6 songs.  Caveman are a 5 member band made up of  bass, guitar, keyboard and drums with a lead vocalist who doubles playing toms, guitars and keyboard.   There were lots of dreamy keyboard patches and beautiful melodic harmonies.  Before journeying into a very eclectic set, their first song seemed like a jazzy intro.  The song had falsetto harmonies,  a mid-tempo feel and was unlike all the other material in the set.   Cavemen announced after the second song that it was their first live performance.  If that was true, they did really well.

The second band up was Glass Ghost, who are a duo made up Eliot Krimsky on keyboards and Mike Johnson on drums.   Krimsky who did most of vocals had a 3 keyboard set up which included a Moog.    Funny thing is, that even though they are billed as a duo, there was also an additional person  on stage who played bass and keyboards. That person, who's name I never got, also sang at one point.

I guess Glass Ghost's music would be considered electronica but it had more of an ambient feel to it.  At one point additional friends came on to play the toms that were placed upstage along side Johnson's drum kit.  At that point, Glass Ghost sounded more downtempo with a poly-rhythmic percussion behind them that felt somewhat African influenced.

Aside from all the genres I just mentioned, there was a definite Classical minor and sometimes modal quality to Ghost's music. At the end of the set, Glass Ghost had 7 friends come out to form a sort meditative choir of background voices.  It was spooky and strange but still enjoyable.   I can't say I really got handle on Glass Ghost's sound but I will say they were pretty interesting. 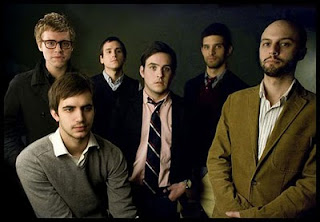 White Rabbits got on stage at 10:35 and ended two minutes short of one hour later.  The set was short only because they zoomed through their set of 14 songs.  The first thing I noticed is that the boys are manic.  In a good way.  At points it seemed like they were attacking their instruments instead of playing them.  I believe it's Matthew Clark who is the wildest of the bunch.   When his arms weren't flailing as he hammered out beats on the toms,  he was prancing around stage with a tamborine or leaning over Stephen Patterson to play the Nord on top of his encased upright piano.  There were even points where Clark's tom playing was picked up as shadow on the back stage wall from the white spot.  The shadow truly seemed animated.

On CD there is a rambling sort of feel to White Rabbits' music.  The songs at times seem to be more about the feel than the structure which is probably why they are on Radiohead's label.  Often on their new CD, "It's Frightening," White Rabbits music feels very much like a contemporary soundtrack.  But White Rabbits music can also have a bar room brawl feel to it.  That feel is most evident when seen live - as I have already implied they are high energy - which is probably why The Specials are a band White Rabbits site as an influence.  In my mind's ear I can hear White Rabbits doing versions of "Nite Klub" or "Gangsters."  Although it hasn't been mentioned in any of the articles I have read about them, I hear an element the band Squeeze especially when Patterson and Roberts sing in unison .

White Rabbits' vocals are traded off between Stephen Patterson and Gregory Roberts.  Sometimes Roberts and Stevens vocals alternate within the same song, sometimes they each sing solo and sometimes they harmonize along with Alexander Even.   Live, White Rabbits' songs are compilations of interwoven lines that flow in and out of each other rather than being played on top of each other.  For example,  Stephen Patterson sometimes would play high octave melodic melodies and then a pedal (repeating one note in tempo as chords go by) on piano in songs  like in "Dinner Party."  Other times Even or Roberts would add small but prominently remember-able guitar parts that came and went like on the song "Right Where They Left You."

There were also instrument trade offs through White Rabbits' set.  For example, on "Kids On My Shoulder," bass player Brian Betancourt played percussion.  On the song "Midnight & I"  Matthew Clark played guitar and Roberts switched to acoustic.

White Rabbits ended their set with a one-two bunch by going straight through the last three songs.   The audience went wild especially after "Percussion Gun."    What I didn't get was why an African American man with blonde mohawk came out to pump up the audience for an encore.   He did a thing like telling the audience "I yell white and you yell rabbits."   It was harmless but the audience was already strongly asking for an encore.  There was no need for a pumping.  White Rabbits are a great band and even if it was only for an hour, they were totally worth the price of admission.