I arrived at the beautiful United Palace Theatre just as Titus Andronicus were playing their first song. As I sat down to hear their set, the same thing occurred to me as when I checked out their music at home. I hadn't changed my mind; Titus Andronicus was a mismatched opening band for Vampire Weekend.

Titus Andronicus did do a good set and were politely received by the audience. Their music included a lot of distorted guitars fluctuating between an Indie and Punk sound. On many internet sites they're referred to as Lo-fi and Shoegaze. The Lo-fi part is true of their recordings but there seemed to be too many traditional rock guitar leads (solos) to be Shoegaze.  As for the bands vocals, Guitarist Patrick Stickles often sounded like Joe Strummer's of the Clash but there were other times when Stickles’ voice sounded rather folksy.

On Sunday night, it felt like Titus Andronicus were getting their feet wet as a band.  During Titus's set Stickles introduced Amy and Dave as doing their first concert with the band.  The band played a new song from their upcoming CD which will be released within the next 2 months.  For me, Titus Andronicus's music was hard to pin down and had too hard of edge to be paired with Vampire Weekend.  So for now, I'm going to wait to hear the direction they take on their sophomore effort.  I probably will have more to write about them in future postings. 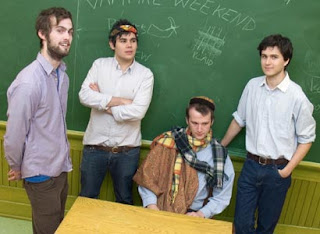 Vampire Weekend's music is new to me. I missed the hoopla surrounding their 2008 debut CD. But I made up for what I missed by listening to their music hardcore for the past two weeks. I really enjoy listening to every song on both the new and old CD. Now that I have seen them live, there is no doubt about it they are a fantastic band. There's a pop sensibility and sparse purity in their music that comes through in concert and on CD.

Vampire Weekend walked on stage to the music of Jay-Z at 9:13, to be exact. For the opening, a giant poster of the new CD "Contra" was revealed. On either side, were two candle opera's which went on and off during parts of the show. Little did the audience know that Vampire Weekend was going to treat us to a set consisting of 20 songs. Including the song "Ottoman" from the film Nick and Norah's Infinite Playlist, they did every song from both CDs except for "Bryn" and "I Think Ur A Contra."

Ezra Koenig said "What's up New York, It's been awhile," before going into the third song. The band then played Cape Code Kwassa Kwassa and I realized that Chris Tomson is a powerful drummer. For me, a kick ass drummer is one of the core ingredients that make or break a band. What came to mind when I heard Tomson play was Stewart Copeland of the Police. Tomson gives Koenig's melodies a strong foundation, the same way Copeland gave Sting.

Vampire Weekend are fun to watch. Koenig seemed to bop along in place as he sang with guitar in hand. But bass player, Chris Baio was light on his feet and took full use of the stage. He danced around for most if not all of the show.

A violin quartet came on stage as Koenig introduced "M79," as being a Manhattan hometown kind of song. (The M79 is the NYC bus that runs from Upper East to the Upper West side of Manhattan.) Koenig made many references to New York City. At one point he said that even though it had been an extremely busy week that the band was happy to be back in New York. I think that excitement was the main reason Vampire Weekend over extended their setlist. They were totally excited to be back in New York. I believe the band members met at Columbia College and that Koenig actually taught school in the Bronx.

On their CD Koenig uses an autotune on his voice for the song "California English," for effect. I was surprised he used the auto-tune in concert but then realized the effect gave his vocal clipped quality and a kind of Jamican flavor. On the song "Taxi Cab" Baio changed to an electric standup bass and Tomson moved to (what looked like from my seat in the balcony) electronic drums. Koenig announced that it was the first time doing many of the new songs in NY and then proceeded to do "Run," which is my favorite song on Contra.

Koenig stated prior to the song "A-Punk" that playing a beautiful movie theater was a trade off because there are seats which make it difficult to dance. He suggested the audience pogo in place. Once Vampire Weekend was into the song, with bass in hand, Baio once again moved around his side of the stage doing major steps.

I noted many songs were accented by violin parts which made some of Vampire Weekend's underlying melodies more pronounced.    I also noted interesting rhythm changes within particular songs. Case in point was "Diplomats Son" which seemed to fluctuate between a slow and double time reggae feel.  Rostam Batmanglij, who I haven't mentioned yet, seemed to be the member of the band most responsible for adding color to many of the songs.  For the song "Giving Up The Gun," he played a keyboard part under, and at times doubling, the vocal.  The part was subtle but gave a distinctive flavor to the vocal.

Vampire weekend ended there set by going straight from "Campus" into "Oxford Comma." The tempo for the latter seemed to be a little slow but the audience didn't seem to mind.

Vampire Weekend returned for their encore with four more songs. Koenig made a point of telling the audience it was the longest show they had ever done. I guess it was the bands way of saying how much they appreciated being back in New York City. The band returned to the stage with "Horchetta" and ended with the a song Koenig said they always end with, "Walcott." The audience sang along loud and clear through the whole song. I know it's cliche to say but it was a terrific ending to a great show. There's no other way to say it!!