Although I had a ticket for Passion Pit for quite awhile, I did not feel like going out on Sunday night.    I was feeling the need to stay in with a cup of tea by my beside and the remote control in hand.  It's been really cold in New York.  But regardless of how I felt, I knew I would kick myself for missing a band I had been dying to see.  So,  I'm glad I did finally go; I really enjoyed the show once I got there.

I walked in as the first band in the evening's lineup was about to do their last song.  I didn't know the band BRAHMS had been added to the lineup.  I am going to skip writing about them for now.  I hope I come across them again on my journey through concert-land when I can hear a full set.

Sunday was my second time at Terminal 5.  I'm glad to say it was a better experience than the last time around.   This time, I positioned myself in the center of the higher balcony.  The sound in the room was pretty good and better than the last time.  Also, this time around, they opened the side exits allowing the crowd to quickly exit the building once the show ended.

Tragedy: All Metal Tribute to the Bee Gees started their set by walking on stage during the strains from a heavy metal guitar.  Entering behind 3 guitar carrying frontmen, were their bass player, drummer, 3 background singers and a go-go dancer who the band referred to as their "personal trainer."   Without further fanfare, Tragedy broke into their opening number.  Never in a kabillion years could I have conceived of a arrangement of "Night Fever" a la AC/DC.   I am specifically  making reference to AC/DC because Tragedy's vocalist (the guy in the pink unitard) sounded like Brian Johnson.

Tragedy is a hoot!!! They bill themselves as the "All Metal Tribute to the Bee Gees ; Tragedy is the No. 1 Heavy Metal Tribute to the Bee Gees in the Tri-State Area."  They repeated those 2 lines all through their set.  Another line that got repeated a few times was "Audiences today are craving a metal Bee Gees experience more than ever, and Tragedy delivers." Tradegy parodies all that was outrageously over the top about the 70's by turning the Bee Gee's part of the disco era into heavy metal.  Their performance was very Spinal Tap to say the least.

Tragedy's musical arrangements and stage persona's were very funny but first  I need to talk about Tradegy's look.  There was lots of glitter and silver.  The background ladies all looked like their hair was cut by the hairdresser for the TV series Charlie's Angels .  One a wore a  tube top and another wore wings which looked big and fluffy.  The boys, well ...let's just say the tradegy was in their clothing; they were a mess!!  The guy who did most of the singing wore a pink unitard.  The guy next to him wore a pleated bell bottom pantsuit a la Elvis which he later took off to reavel his thong.  The butt cheeks were not so pretty.  The drummer was shirtless with long hair and avaition glasses. The bassplayer wore sequined silver pants and sneakers.  And the personal trainer wore head band and sweats as ran from one side of the stage to the other doing push ups and jumping jacks.  There was one point when the personal trainer even quickly mooned us.

Tragedy found reasons to do two songs other than those originally sung by the Bee Gees.   They did "Grease" which was originally sung by Frankie Vallie but written by Barry Gibb.   They also did "Disco Inferno" by the Trammps because it was on the Saturday Night Fever soundtrack.  The funniest arrangement of their six song set was "How Deep Is Your Love."  I would love to hear what they do with "Fanny (Be Tender with My Love)."

Tragedy did a funny bit with their V shaped silver glitter guitars.   One of the frontmen turned the guitar upside down and stuck his face in the V as if he were giving head.   Then he turned to the other frontman and asked him if he wanted to try some.   The other guy made a face as if to say "I don't want your leftovers." I thought the act had arrived at the bottom of the hill until I saw the ugly cellulite butt cheeks.  I wasn't a expecting a Howard Stern moment at the end of Tragedy's set.  But the butt cheeks and the song "Staying Alive" made for a hysterically comical ending.

(I don't usually give a setlist for opening bands but I included one since I was familiar with all the songs as covers.   If you notice, I don't have band member names because I couldn't find them on-line.  If anyone knows the band member names and would like to post them - please do.) 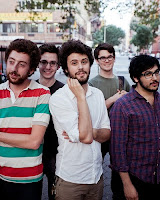 I read many posts on other blogs before seeing Passion Pit.   Two main complaints were that the crowd was young and that frontman Michael Angelakos spent too much time singing in falsetto.  Now that I have seen the band for myself, I have to say I disagree.    There were quite a few older folks like myself , some in their 30's and 40's standing along side me in the balcony. As far as I could tell, Sunday night's crowd was diverse. There was a group from Norway standing right beside me through the whole show who sang along through most of Passion Pit's set.  As for Angelakos falsetto, I liked his vocals.  His falsetto seemed true to Passion Pit's recordings and didn't seem forced at all.  Which leads me to ask why anyone going to a Passion Pit concert would complain about Angelakos singing mostly in fallsetto.  That's the way he sings on most of Passion Pit's recordings.

Passion Pit walked on stage, as a synth keyboard patch played and LCD screens had moving star images.   Once a bunch of flood lights came on and LCD screen images turned to single color dots behind them, Passion Pit began their set in an orange glow as they performed "I've Got Your Number."    From the top of show, I knew the lights were going to be an interesting part of the performance.  During the next song "Make Light" - the screens flashed white and strobe lights went off each time the songs descending introduction keyboard line was played.  Aside from the clouds during "Moth Wings", single color bitmap dots were displayed on LCD screens which were the same color as the flood lights.    The way the stage was lit gave the band a different colored monochrome aura for each song.

Passion Pit's musical performance felt fluid and natural but the song beginnings and endings seemed robitical especially in the first part of the set.  To be specific, when songs started the lights went up; when songs ended the lights almost went down to dark.  Each song didn't have some sort of cadence or tag to let one know it was ending.  The songs simply ended with the kick drum on the one (which I actually like).   Since Anglekos didn't have a spot on him between songs and he didn't talk much, it sort of felt like a light switch flicked on and off.

Michael Angelokas just did vocals for most of the show but played keyboard here and there.  He danced around a lot and was in great voice.  As far as talking to the audience,  he seemed to loosen up as the show progressed.  He told the audience that we were the best of all three nights.  ( I, of course, thought "yea, and you told the night before us they were the better of two").  He also made a comment stating "it's been quite a journey" which I assume was about starting out writing songs for his girlfriend all the way to touring and performing to sold out audiences as a band.

The audience love, love, loved Passion Pit.  Everytime I looked at the main floor and then the balconies, there was a lot of dancing going on and a lot of singing along as well. (Myself included.)  On the intro to the song "Smile upon me" the audience started clapping in 8th notes.  I've never heard an audience do that and I certainly never heard an audience do something like that without being prompted.   After the 12th song the band walked off stage. Instead of chanting the word "Encore" the crowd chanted "Sleep- ee - head."

Passion Pit returned with two more songs before getting to "Sleepyhead."  The first of the two was "Kingdom Come." For that song, Angelakos sat  and played what looked like a vintage Roland piano.  The second was a surprise version of "Dreams" by The Cranberries.  Many people had that bewildered look on their face of "damn! - I know this song but I can't place it. "  Myself included.  I wrote down the lyric and googled it when I got home. I then felt a little foolish because I have heard the song at least 100 times over the years.  I guess it just sounded very different coming from Passion Pit.

I haven't written more about the other members of the band because there was nothing really "showie" to write about.  At this point in the bands career,  it seems like it's all about working together as one tight unit which is just fine.  I was the age of  Passion Pitt's members in the late 70's and early 80's.  Their music reminds me of all the good things about the music during that period in my life.   I have to say I also get a 60's vibe from Passion Pit as well.  Whenever I hear "Seaweed Song" I wonder if Angelakos's parents listened to the Beach Boys.  Because there is definitely something in the melody that screams Brian Wilson.

I really enjoyed Passion Pit's performance.  I sang along, danced in place and heard fun music.  What was there not to like?

To see great pictures of this show, go to:
http://www.brooklynvegan.com/archives/2010/01/passion_pit_pla_5.html