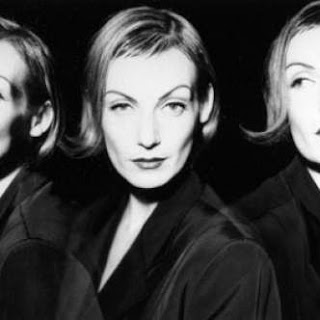 From the moment she walked on stage sleeveless, wearing a black vest and long black palazzo pants, the audience knew they were in for something special.  Her manly styled Marlene Dietrich outfit along with her emotional delivery is truly one of a charismatic chanteuse.  From the guttural sound she made when singing in French to the way she often sang out of the right side of her mouth, everything about Ute Lemper made me feel like Joe's Pub had been transported to somewhere in Europe

In a show that was a little more than an hour, Ute Lemper took us into a world she dubbed “Last Tango in Berlin – from Brecht in Berlin to the Bars of Buenos Aires.” As she guided us through France and Argentina by way of the German capital, Ute centered a good portion of her show around the tango, sometimes through words but mostly in song.

As if channeling Jacques Brel, Ute Lemper started the show with "“Chanson de Jacky”, a beautiful French ballade which I am unfamiliar with, and “Port of Amsterdam.”   She then talked about how Brel, despite being from a different era, had much in common with Brecht in terms of politics and his view of society .  Paying homage to Wiemar Era Ute sang songs, by Kurt Weill and Bertolt Brecht, from 3 Penny Opera which she used as bookends for her detour through Buenos Aires.

After beginning her journey with “Tango Ballade,” Ute asked the audience to vision a place in South America where artists could slow down, relax and maybe smoke a joint. She then referred to the instrument the gentleman to her left was playing called the bandoneón, a small accordion like instrument with buttons on either side. Ute told us that the instrument was invented in Germany but became popular in Argentina and Uruguay. She then referred to it as an essential part of tango music in Argentina. Ute did several songs in Spanish, one of the highlights was Astor Piazzolla’s “Maria de Buenos Aires.” Though she didn't mention it, through my research I found out that Piazzolla was not only popular as a tango writer but also as bandoneón player. I have to admit that the song was also a highlight because she teased and flirted with the audience along with sitting on my friend Mark's lap.

That's the thing about Ute Lemper, she knows how to bring an audience in and hold on to them. For an entertainer to do that is an art. One of the ways she does it may be by sitting on a man's lap with a red feather boa around her neck . But the most important mechanism she uses, to keep the audience engaged, is finding the commonality between us and her stories. Before singing “Ballade of the Crazy” in Spanish, Ute made reference to how there are so many different types of people in New York. As she listed some of the types of people, we all snickered because it was obviously something to which New Yorkers can relate.

Ute Lemper told a personal story, dating back to November of 1989, before returning to Berlin through song.  Apparently, Ute was living in New York when the wall in Berlin came down.   She said she was with a piano accompanist when she heard the news and that they both turned to each other saying "What are we doing in New York?"  The story ended with them both getting on a plane to Berlin the very next day. But before the story ended Ute Lemper conveyed her true love for Berlin by describing it in a way that I truly understood and made me want to book a flight. She said, just as New York is nothing like the rest of American, Berlin has little in common with the rest of Germany. Both cities are unique places, entities onto themselves.

Following her story, a fabulous and yes!-engaging moment came when she returned to 3 Penny Opera with “Mack the Knife” in German. She put on a bowler hat and sat on the baby grand piano. Instead of immediately singing, she whistled the tune as unprompted members of audience joined her.  I couldn't help but think to myself what a brilliant way to bring the audience in on a song that's been done a gazillion times before without making it feel old and tired.

Without stopping, Ute went into a blues arrangement of “Cabaret” which quoted “Show me the way to the next whiskey bar...” from “Alabama Song.” She kept what turned out to be a medley going by singing part of “All That Jazz” and returning to “Mack The Knife.” When she ended the medley, the applause was loud and heavy.

Of the few Cabaret shows which I have seen, set ups for songs are rehearsed and staged. There was a little of that in Ute's show but there was also a lot of adlibbing. At two points during the show, Ute Lemper asked the audience what that would like to hear. It didn't feel like a ploy. It felt like her audience knew her material and she was confident that she could do anything they asked for, including her yiddish song cycle.  The audience's choice seemed to be "Surabaya Johnny"  She did a wonderful rendition of the song in German.  Up until Saturday night, I had only heard the song done in English by Bette Midler but never in it's original language.  (The song is from the musical Happy End also by Kurt Weill and Bertolt Brecht – along with Elisabeth Hauptmann)

Before the evening ended, Ute made sure she had some fun with the audience during her jazzy number “I Am A Vamp.” She played on the word vamp's definition by incorporating the seductive sensuality of a vampire. Each time she would sing the word vamp she would show her teeth and make a hissing cah sound. During “Vamp,” Ute stepped into the audience for the second time. It was at that point all the men in the audience, myself included, knew we were in for trouble.

First, she played with the guy sitting at the table in front of me. She had already been mimicking a trumpet but then asked the guy his name and used his name Dan to scat by playing with the vowel sounds (Dan, Don, Dawn, Den etc.,). It seemed like she was through with Dan for awhile and this time choose me to bite on the neck. Once she made believe she bit me, she complimented my aftershave and moved onto a few other men in the audience. A funny bit was the surprise quoting of Marilyn Monroe's “Happy Birthday Mr. President,” before almost ending the song – the quote was pretty much the non sequitur that could.

Notice I wrote “almost ending the song.” She wasn't through with Dan. She took off the guy's eyeglasses and tried them on, She then got back on stage and swirled around letting us know she found a new way to get high by using Dan's eyeglasses. Ute did the last song of the set in French, keeping Dan's eyeglasses on for half of the song. Her dizzy movements and moments looking over the glasses were very comical.

For the encore, Ute accepted a bouquet of flowers from an audience member and sang “Falling In Love Again” in German. Once again the song was determined by audience request.

There are two things I need to state before ending this posting. One is that I'm sorry I took so long to see Ute Lemper. And Two is that I'm really fortunate to have seen her at Joe's Pub because in Europe she plays in much larger arenas.

Ute Lemper was accompanied by a trio of very talented musicians. A standup bass player, who's name I didn't catch, along with Vana Gierig on Piano and Tito Castro on Bandoneon.


( If anyone knows the second and last song of Ute Lempers set or who her bass player was for the show, please feel free to leave a comment. I would love to know.)

Email ThisBlogThis!Share to TwitterShare to FacebookShare to Pinterest
Labels: All Postings, Ute Lemper