Friday was my first time at Terminal 5. I can't say on the whole that I was impressed. The layout of the room is decent because it has two balconies but if you're on the first floor the field of vision isn't great. The sound is a little better than adequate which isn't saying much. What really destroyed any favorable opinion of Terminal 5 is that management does not really know how to evacuate the place once the show is over. There are many exits in the place but there were bouncers blocking them forcing people to go out the front entrance. Not good.

Promptly at 8PM, The Screaming Females walked on stage. The trio are a punk band out of New Brunswick, New Jersey. They are lead by the only female in the band, guitarist and vocalist, Marissa Patenoster. What kind of makes The Screaming Females unique is that their dissonant chord changes and fast tempos sound punk but Marissa's guitar leads come off more as heavy metal and so do her primal screams. When singing, Marissa's slightly flat vocals reminded me of Johnny Lydon's and therefore seem to work well in the context of the band's sound.

Along with Marrissa were Jarrett Dougherty on drums and King Mike on bass. King, who danced around awkwardly on stage while playing powerfully rhythmic bass-lines reminded me of Krist Novoselic of Nirvana. With songs like “No Being Disgusting,” “Buried In The Nude,” and “Bell,” The Screaming Females barreled their way through a 12 song set which was more than politely received by the large Arctic Monkey's audience.

I think The Screaming Females are a good band but it felt like they were poorly matched opening for the Arctic Monkeys. I could see them opening more for bands like Rise Against or even Metallica. 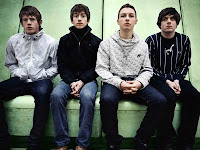 At approximately 9:15, Arctic Monkeys walked on stage in front of a jam packed audience. As they assembled, “I Don't Want To Set The World On Fire” by the Inkspots was playing over the sound system. Without further fanfare the band went immediately into their set and kept it going at a pretty steady pace. Front man Alex Turner didn't speak to the audience much except for maybe a few thank yous (Cheers), song titles and short remarks here and there. Nonetheless, Arctic Monkeys' set was focused and well delivered.

Arctic Monkeys did 18 songs which sounds like a long set but actually it felt like it whizzed by really quickly. Seemingly, the band did not rush their set. They actually eased into it with “The Jewelers Hands” which Alex sings completely in his lower register. And they eased out of the show with “505” which starts out slow but gains momentum building powerfully to a mid-tempo feel. Apparently, The Arctic Monkeys did the same set on Thursday night because Alex said “ We're doing the same set as last night but I'm wearing different boots”

Arctic Monkeys did seven of the ten songs from their new CD Humbug. Apart from the Nick Cave's cover “Red Right Hands,” I felt the new material was the most powerful. The new stuff is not as poppy as some of the early stuff; it has a rougher more experimental edge. I also think Alex Turner's songwriting is maturing and taking on new direction. A perfect example is “Potion Approaching” which Alex sang sans guitar. Fill in guitar and piano parts for the evening were done by, sideman and the band's recording engineer, John Aston.

Smoke from dry ice seemed to be rolling around on stage through most of the show but seemed a little heavier during “My Propeller.” There was a blue light and lots of smoke....hmmmm. “My Propeller” sounds to me like it could be about computer sex. Maybe, maybe not.

Arctic Monkeys did not have a lot of unnecessary frills outside of the dry ice and strobe lights occasionally throwing a shadow on the curtain behind them. The only time the lights were used as a part of the show was during the Nick Cave song where they fluttered along with the clanging guitar part.

I noticed during the show that Alex Turner's accent seems to be less pronounced than it is on earlier CDs than Humbug. I hope he doesn't loose it all together because, like Damien Albarn of Blur and Joe Strummer of the Clash, I think Alex's nasal London regional accent is sexy. Speaking of sexy, I think some girl threw her bra on stage because I saw Alex pic it up and hang it on his boom mic stand during the second song.

As I said earlier, the place was packed but it didn't stop the audience from slam dancing. I watched the rippled waves of people move from side to side. The shows energy reached it's highest point during “The View From The Afternoon” when the body surfing began. From the balcony, it looked like bodies floating on waves. As the Jamie Cook rang the closing V chord, Alex theatrically fell to his knees. “ I recently watched the video for “The View From The Afternoon.” Although there is a stand in actor, the video revolves around Matt Helders fantastic drum part. The actor is playing drums in the middle foreground of a London apartment complex in freezing cold. It's quite an interesting black and white music video.

The shows end prior to the encore was a hoot. Arctic Monkeys played “Florescent Adolescent” but the tempo seemed to be fluctuating. Somewhere in the middle of the song the feel changed and Matt moved from behind the drums to sit on a stool that was put center stage. Matt started singing a song I knew but couldn't place until the guy next to me said “Oh shit!” He's doing Wham.” In deed he was, it was Wham's “Last Christmas.” Matt sang about a third of the song. Then the whole band returned to playing “Florescent Adolescent.” The bit wasn't on the set lists put on-line for any of the Arctic Monkey's previous shows. They must of worked it in starting with NY which explains the shifting tempo (aka..they haven't settled into the arrangement yet)

The two songs Arctic Monkeys ended with are among my favorites. I love “Secret Door.” I think the lyric is clever and I especially love the fact the hook is not the name of the song. The song goes between a heavy rock feel and the sappy melodic hook “Fools on Parade cavort and carry on.” (I'm not putting the song down in any way – I love a bit of cheese.) The recording is great; hearing it live was even better.

The last song “505” was done in the classical style of “Ladies and Gentleman – Elvis has left the Building.” As the song culminated to musical high point, Alex Turner walked off stage as the band played on. The band continued for another few moments, then each walked off stage until only Jamie Cook remained. Jamie played the last distorted chord of the evening and walked off stage as the delay on the chord faded. It was the final end to a wonderful show.

Arctic Monkeys are Alex Turner on vocals and guitar, Jamie Cook on lead guitar, Nick O'Malley on bass and Matt Helders on drums and vocals. On tour with the Arctic Monkeys playing a rhythm guitar, a Nord and Korg Organ, as well as doing background vocals is John Aston.

The Jeweller's Hands
Brianstorm
This House is A Circus
Still Take You Home
Potion Approaching
Red Right Hand ( Nick Cave & The Bad Seeds cover)
My Propeller
Crying Lightning
Sketchead
I Bet You Look Good On The Dancefloor
The View From The Afternoon
Cornerstone
If You Were There, Beware
Pretty Visitors
Do Me a Favour
Fluorescent Adolescent / Last Christmas (Wham cover)

For great pictures of this show go to: