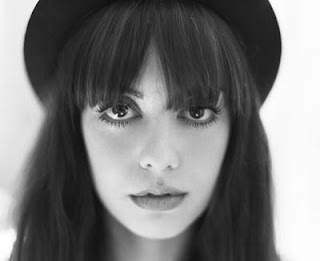 The first time I heard Diane Birch was on Soundcheck hosted by John Schaefer on WNYC, New York Public Radio. On that particular day, I was half listening because I was busy working at my day job. But I was impressed enough to write Diane Birch's name down. When I got home, I listened to the music on her MySpace page and then downloaded her new CD Bible Belt. It took awhile before I listened to the whole recording but when I did I was really impressed. So many of her songs remind me of different 70's artists like Maria Mudlar, Leo Sayer and Carol King. What's really great about Diane Birch is, rather than regurgitating the70's sound by trying to replicate the era's music, she authentically creates that era's sound by making it her own.
Though Bible Belt is a great CD, each song performed on Saturday night surpassed the quality of the recording. Right off the bat, I noticed the true vibrant quality of Diane's voice as well as how she seemed to play piano with little effort. Diane mentioned in the middle of the show how much she loved playing the Steinway and that it was one of the reasons she kept "noodling" on it between songs. Aside from the Wurlitzer Fender Rhodes piano which Diane Birch takes with her on tour, NYU provided a Steinway Baby Grand.

Diane Birch's set started with the four members of band walking on stage. Josh Dion began by drumming a steady beat as horn player Eric Bloom introduced Diane Birch.  Birch walked out wearing all black, then sat at the Steinway and played her piano intro as the band kicked in on her song "Choo Choo. Following up her first song, Diane immediately moved to the Rhodes to perform the song "Fools."

Before performing "Nothing But A Miracle," she mentioned how glad she was to be in front of an audience that wasn't a bunch of screaming young girls. She told the audience if they wanted to go crazy, that they should go ahead. She had already seen a good deal of crazy by opening up for Nick Jonas. As an aside, It might have to do with the NYU setting or it may have to do with her music but the crowd seemed to be split between middle aged couples and young adult students.

Birch performed "Fire Escape," without the female backing vocals as presented on the opening cut on her CD. However, the old fashion 6/8 ballade still really shined as one of the set's highlights. Diane followed up with song "Ariel" which didn't need explanation. But Diane entertained the audience by telling them about her communication with a past boyfriend through Skype and how that long distance relationship was not meant to be.

All through Diane's music the one thing that's glaringly noticeable are her Honky Tonk piano licks a la Billy Preston and Dr. John. Starting out with a few quality licks, Diane slid into "Rise Up." With it's strong gospel chorus, "Rise Up" allowed Diane to follow up with a portion of the set that was more intimate.

When the band walked off stage, Diane Birch said " Ahhh...Me, Myself and I - Alone at last." Once again she sat at the Rhodes but this time she performed her cover of the Haddaway song. I love her arrangement; It surprises me that I know the song but it seems brand new. I never would have thought about turning that particular dance song into a ballade. (The truth be told - I used to hate constantly hearing the song at the gym - obviously Diane heard something I didn't.)

Still alone on stage, Diane Birch did a song that isn't on her CD. It was a song about when she lived alone in London with just her Blackberry. The song, in 3/4 time, is called "Cheap Ass Love." The song was comical and just another of the many facets of Diane Birch's music.

"Forgiveness" is the song where I heard Diane Birch's vocals shine . Diane stood up with mic in hand to give the song her all. With a nod from her musicians who were sharing background vocals, Diane sang her heart out and landed back at the piano toward the end the song.

Diane mentioned several times that as a teen adolescent she was Goth. It's kind of hard to image because the difference between Goth and Diane's music is night and day, But I digress. Diane set up the song, "Don't Wait Up" by explaining how she used to try to sneak in to her house from an evening out wearing a Goth getup. She said she would often find her father waiting for her as he read the Bible.

Close to the end of the show, Diane Birch said let's hear it for my band. She didn't really introduce all of them, she just had us applaud. (It was okay by me because I never retain band members names when they are said on stage.) Alex Foote, in his black outfit and Bowler hat, took another solo during "Rewind " at which point I noticed that there was a hat thing going on. The drummer, guitarist and horn player were each wearing hats. (Yea - I know - it took me awhile)

Diane ended the set by announcing that the song she was about to do was on the Film "Valentine's Day" soundtrack. (I have no intention in seeing the movie but I'm glad she's on the soundtrack.) Of course, everyone clapped and danced along in there seats for the last song "Valentino." The set ended with the band waving goodnight as they departed on one side of the stage, Diane Birch exited on the other.

The lights stayed dark, with a pin spot on the Steinway. The audience cheered for and received the encore song "Photograph." It's a great ballade with a gospel tag ending. The words are "Little Light, Little Light, Oh we're gonna make it Right." The show ended on a high note with the band jamming and vamping out on that tag ending.

Email ThisBlogThis!Share to TwitterShare to FacebookShare to Pinterest
Labels: All Postings, Diane Birch