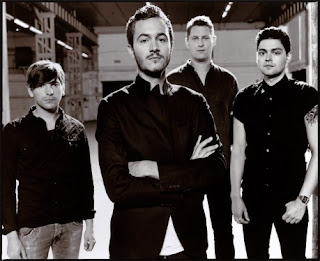 I walked into Terminal 5's main hall in the middle of The Dig's opening song.   The hall was half full at that point but the audience was extremely attentive to what was happening on stage.  The Dig have an indie rock sound with vocals shared between bassist Emile Mosseri and guitarist David Baldwin.  Their sound is filled out by, guitarist and keyboardist, Erick Eiser and Jamie Alegre on drums.

Like the many electronic musicians I've written about, Erik plays vintage keyboards.  I'm not so sure if what looked like a Fender Rhodes Piano and organ were vintage. But the keyboard, with the broken lower register keys, was definitely a Casio CZ series keyboard from the 80's.

I wasn't familiar with The Dig's material but I did like what I heard.   I may change my mind after future listening or after having another opportunity to see The Dig in concert.  But for now, based on what I  heard, I'm going to say The Dig's music reminded me of Mathew Sweet.   Like Sweet, there seemed be an assemblance of good pop songwriting with each song having melodic vocals over distorted keys, bass and guitar.

Both The Dig and The Antlers  reside in Brooklyn and both have been on tour with Editors for the two weeks prior to the New York show.  Before going into their third song "Carry Me Home,"  bassist and vocalist Emile Mosseri mentioned how good it was to be home.

The Dig did 5 songs.   Mosseri announced a sixth song which they were about to do, as their last song, but he was apparently told they had to end at 5.  Too bad.  The Dig had a pretty good set.   I don't think one more song would have made that much of a difference time wise.

The Antlers surprised me.  Their sound completely captured my attention.    I loved the way instrumentalists, Peter Silberman and Darby Cicci manipulated sound and dissonance.  Both musicians had boards filled with pedals on the floor next to them.  Aside from keyboard, Silberman predominantly played guitar and Cicci played electric piano.

What I  specifically loved through The Antlers set was Peter Silberman's compelling voice.  His vocals often had that wonderful high crying almost screeching vibrato that Jeff Buckley had in his voice. All of Silberman's vocals are present on The Antlers CD, "Hospice" but they are way down in the album's mix.


"Hospice," is critically acclaimed because of it's subject matter and sullen nuances.   The music on  The Antlers' CD has a certain intensity which increased tenfold when I heard them in concert.   I expressed this to the guy next to me, at Friday night's show, who was specifically there to see The Antlers.   He told me about how much he was into The Antlers' recording which made me revisit the CD before writing this posting .  I see what he was talking about , it's really unique and disturbingly dark.

During The Antlers set, I  noticed that drummer Michael Lerner seemed pissed off. (That guy next to me noticed it as well.)   During the second song he hunched over his drum kit with folded arms leaning on his snare drum.  Then later on, as the last song finished,  he threw his drum sticks up in the air and walked off stage.  As an audience member, I'm not sure what to think except that his anger was pretty noticeable.

With regard to Editors, I need to state one thing before going further - they kicked ass!!!

Prior to the concert, I listened to Editors' new CD "Into the Light and On this Evening" for about two weeks.  I didn't automatically love it but it grew on me.   What I found was, for a keyboard based album, the CD seems to lack  highs and lows.  By that I mean, what are supposed to be dramatic parts don't really feel compelling.  However, in concert, saying the new material came alive is an understatement.

The new CD's title cut was the opening song of Editors' set.  On the CD, Tom Smith delivers the vocal like the late Ian Curtis of Joy Division.  But in concert, Smith sang the vocal a octave higher.  When the song reached the musical break and the drums kicked in, it felt like Editors' blasted off into their set of 18 songs.

After the first song, Smith said  "Hello New York - It's been too Long.''  Then he grabbed his guitar and started playing "Lights."  After doing the first 8 bars or so, Smith said "Fuck! this guitar is way out of tune."  A roadie quickly appeared to switch guitars and Smith picked up exactly where he left off.  The band then zoomed through their set which never lost momentum.

Front-man and vocalist, Tom Smith  kept changing between upright piano, keyboard and guitar through the entire show.   Smith seemed always in control yet extremely emotive at the same time.  Sometimes Smith walked across stage with limp wrists looking very zombie like.  Other times he held his hands over his head like a person who was about to have a crying fit.   Then there were those few times when he took a bent knee stance while holding his guitar as if it were a machine gun.  Aside from Smith's rock-n-roll stances, there were two points in the show when he threw his guitar pick into the audience after finishing the song.

Bassist, Russell Leetch seemed to be enjoying himself through most of the show.  Russell often would twirl in place with bass in hand or walk to the tip of the stage overlooking the audience.  On the song "Bones," he stayed at the stage edge for most of the song.   Christopher Urbanowicz seemed to be the groups musical geek who played multiple keyboards as well as guitar.  Chris' footing seemed a little more stable on stage then his other two counterparts. As for Edward Lay, his relentless drumming made all the material really shine.

The great thing about Editors' set was that the songs seemed to be strategically placed to work well in that order.   The band did the same exact set in New York as they did in Denver.  The only difference was that in New York they omitted "Walk The Fleet Road."    For me, the musical high point was "The Big Exit."  Hearing that disturbingly haunting intro live was really powerful and unlike anything before it.

I was in the balcony (as usual), so I was able to scan the audience on the floor.  What I saw was that the entire audience was totally into Editors performance.   Heads were bopping by people in front of the stage all the way to the back of the hall.  The audience really responded to older material like "Bullets' and started started clapping on the song "The Racing Rats."

Editors ended the set on another high note with "Bricks and Mortar."  The drum and bass with that really anthemic keyboard synth line was really interesting.   But what made the song stand out even more was the screeching rhythm that Christopher Urbanowicz pounded out on a drum machine.  It really gave the song a driving push.

Editors returned for their encore with "Munich" and then "Papillon" which was expected.   Tom Smith announced the next song would be their last for the evening.  He then went directly into "Fingers In The Factories,"  delivering the most feverish vocal of the evening.  Editors waved goodnight and Smith said "Thanks! See you soon!"

They will.  It was a great show.

1.In This Light And On This Evening
2.Lights
3.An End Has A Start
4.You Don't Know Love
5.Bullets
6.The Boxer
7.The Big Exit
8.Blood
9.Eat Raw Meat = Blood Drool
10.The Racing Rats
11.Escape The Nest
12.Like Treasure
13.Bones
14.Smokers Outside The Hospital Doors
15.Bricks And Mortar

Email ThisBlogThis!Share to TwitterShare to FacebookShare to Pinterest
Labels: All Postings, Editors / The Dig / The Antlers