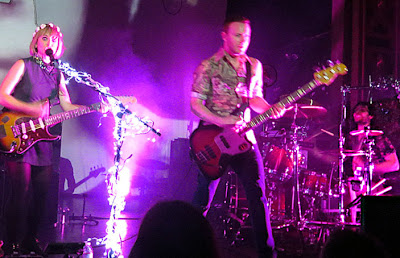 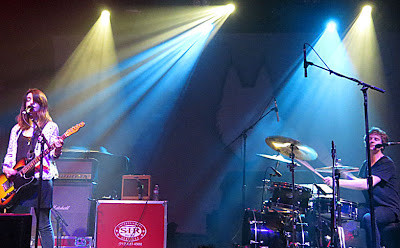 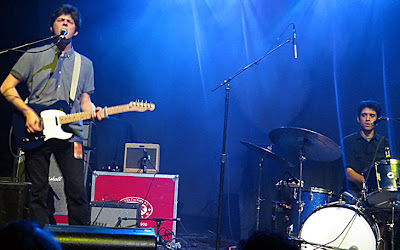 There was a lot, I mean A LOT of energy on stage Thursday night, with a colossal amount of it coming from both opening duos. Once The Joy Formidable got on stage, the energy along with the sound, amped up even more by about 10 decibels.  Below is the rundown, along with photos. 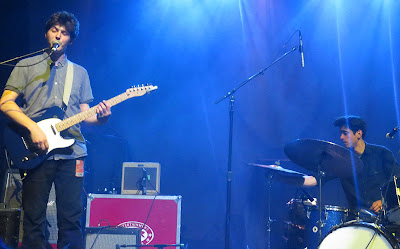 You Won't is a duo out of Boston comprised of Josh Arnoudse and Raky Sastri. To date, You Won't have one full-length debut CD titled "Skeptic Goodbye" on Old Flame Records released in February of 2012. From what I can see from their bandcamp page, Arnoudse writes all their songs. From what I can see from their stage performance, Sastri compliments Arnoudse's guitar driven material with more than drums but with a melodica, harmonica and even a small xylophone.  I enjoyed their set but felt a little thrown off by how different they sounded live compared to their recordings. With the exception of the "Two Ships" and "Who Knew" most of their songs sounded more hard hitting than folk. My two guesses as to why are, a) - they wanted to match the other bands in the night's lineup or b)- their sound is evolving since it's been more than year since their debut recording; maybe a little of both are true. 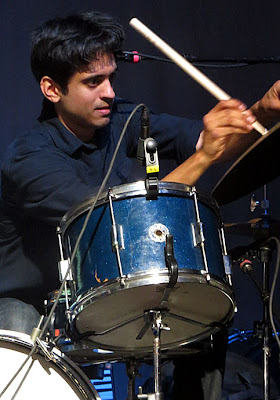 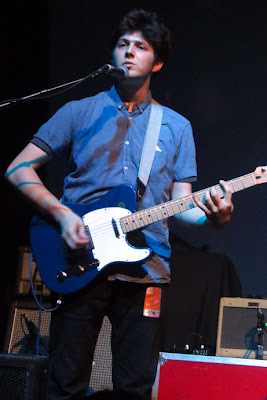 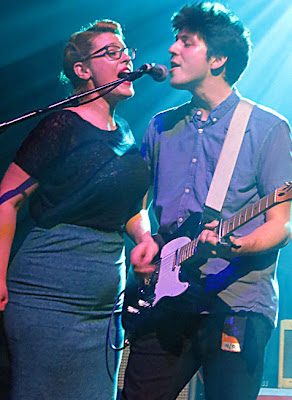 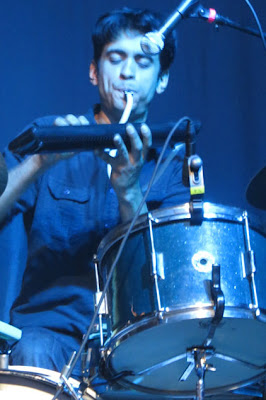 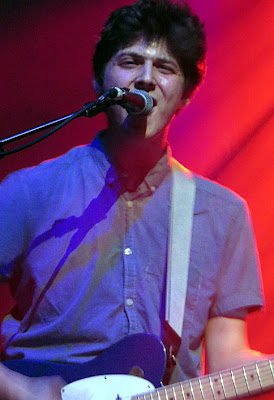 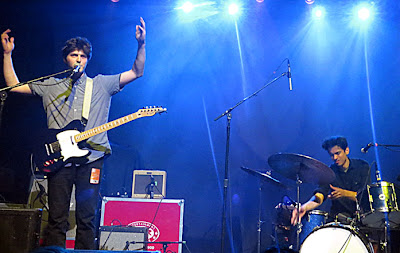 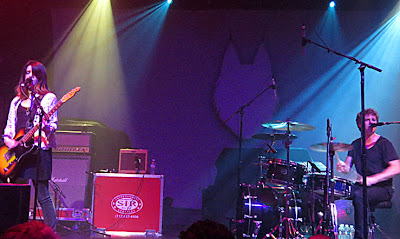 I'm still surprised by the number of guitar/drum duos I've seen over my short time doing concert-log. The duos often not only defy the convention of requiring a bass player but more often than not manage to sound like a full band. Duos that come to mind are the very French Housse de Racket, Brooklyn's Javellin, and Australia's An Horse. And it should go without saying that, the band before Blood Red Shoes, though somewhat on more of the folk side, was also a guitar/drum duo.

Oddly enough Blood Red Shoes reminded me of The Automatic Automatic (as known in US), which I mainly attribute to Steven Ansell often singing stacatto lyrics on the offbeats as he did on parts of "Don't Ask." Also making the duo sound like Automatic was Laura-Mary Carter's 80s Electro-Punk guitar sound. Both Ansell and Carter shared vocals, and both took turns speaking to the audience.

Aside from the a fore mentioned "Don't Ask," another one of my favorites was "Black Distractions" with guitar riffs that sounded very Black Sabbath - maybe that was the point. Don't know if I loved the very punk "Je Me Perds," but it inspired the crowd to stand in place and dance along. (Thank God, no on felt the need to slam dance.) Bloody Red Shoes ended with the stompingly appropriate "Red River." All in all, it was a good set, or to say the least, a very energetic one. 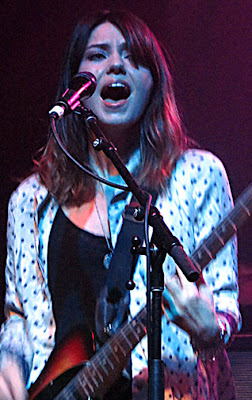 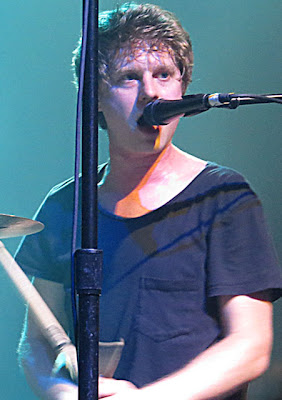 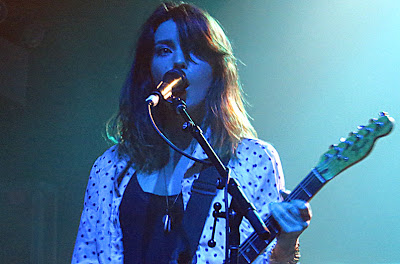 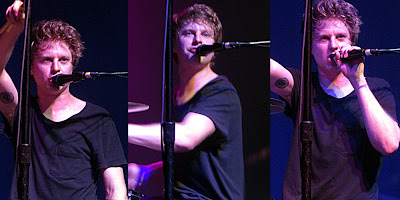 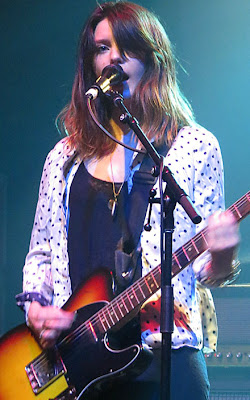 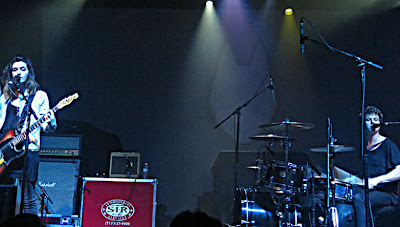 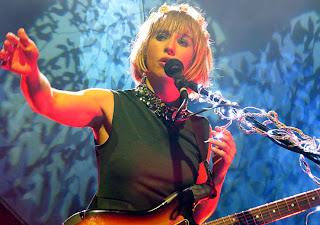 I wasn't sure why I wanted to see The Joy Formidable, except for having been sold out the last few times they came to NYC and having been curious to see what I might be missing. Once it was time for Formidable's set I noticed the place was packed. The crowd around the front of the stage was very friendly and seemed to be excitedly awaiting Ritzy's entrance. One guy even told me to make sure that I took lots of photos of Ritzy because she makes lots of weird faces.

The Joy Formidable began there their set with two of my favorite songs from there 2013 CD "Wolf's Law," namely "Cholla" and "This Ladder Is Ours." Since I usually watch most shows as I take photos, my first impression was that I was watching a band that rarely stood still. There were projections behind the band but they rarely caught my attention except for the neon outline of a wolf's head that was dead center over the screen that was being projected on. My second impression was that Rhiannon "Ritzy" Bryan doesn't really make a lot of weird faces, but she does tend to bug out her eyes which makes her look a bit deranged (or like one of John Lydon's relatives)

The bands set peeked around the rebel rousing "Cradle' and my most personal favorite "Tendons." The moment which followed was a much needed change of pace when Rhydian Dafydd played acoustic guitar and Ritzy sang the ballad "Silent Treatment." It was nice moment - and made me think that the band perhaps could use one or two more changes of pace. Perhaps another slow or acoustic ballad or maybe a cover. As much as I enjoyed The Joy Formidable, I began to feel a sameness to their music and their presentation which needed to be broken up.

The Joy Formidable ended with an encore, but I would have been satisfied to go home a little before then, once I heard the unforgettable "Maw Maw Song." 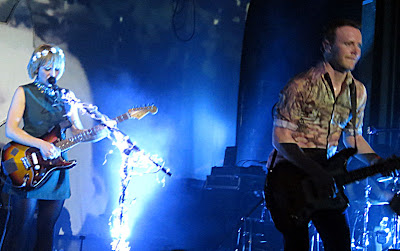 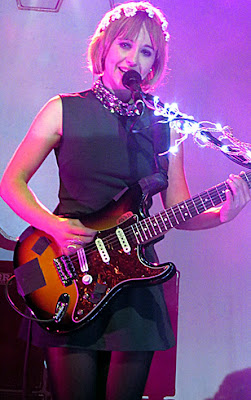 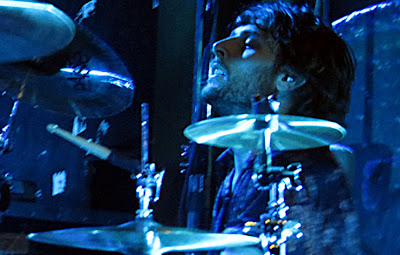 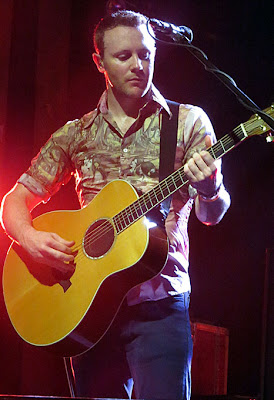 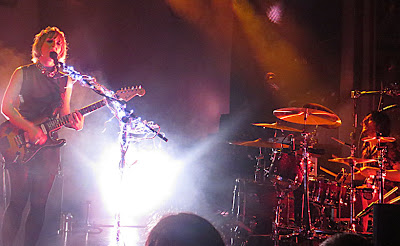 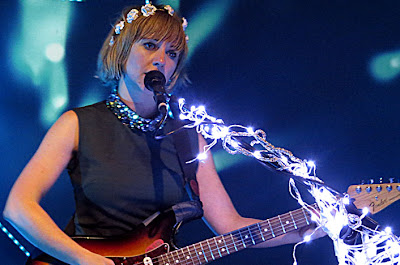 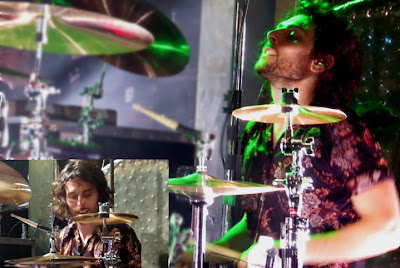 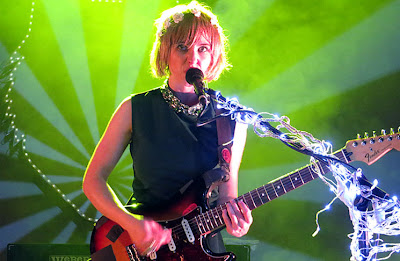 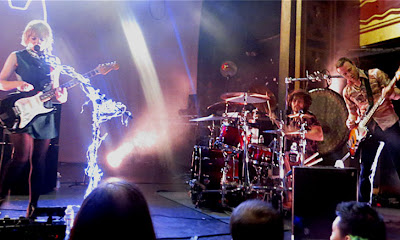 Email ThisBlogThis!Share to TwitterShare to FacebookShare to Pinterest
Labels: All Postings, The Joy Formidable / Blood Red Shoes / You Won't