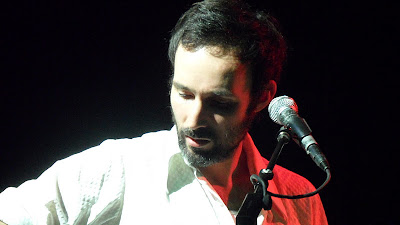 I wasn't absolutely sure that I was going to enjoy Holcombe Waller. Prior to seeing Waller at Joe's Pub, I listened to his music and watched a few of his videos online. I liked what I heard but I can't say that I was blown away. However, seeing him live was a completely different story. I found myself drawn in by his wonderful tenor voice and scaled down arrangements of some of his best songs. 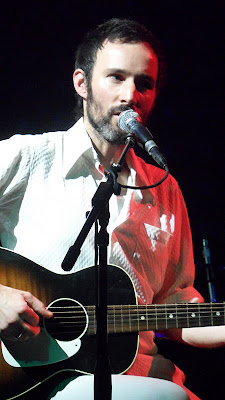 Waller's set got off to a bit of rough start with a small but obvious sound problem during his first song,"Stevia Change." As Waller started to sing the second verse a loud distorted buzz crackled over the sound system which made Waller drop the lyric as the audience laughed. Waller kept playing, but before he returned to singing he blamed the momentary noise on a spirit in the room. When the noise happened a second time Waller said "Maybe this song is a little too real - Ben...we seem to be conjuring some serious shit here!." (The lyric mentions Genghis Khan, Anais Nin and World War Three.) 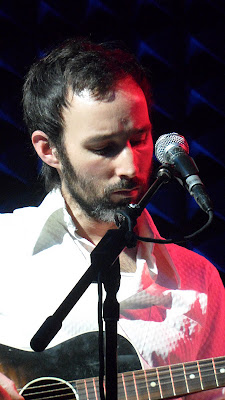 The noise happened once again and Joe's Pub sound person appeared on stage to fix whatever was making the noise. Ben Landsverk admitted that it might have been coming from his guitar and Waller semi-genuinely showed concern by saying "Ben, that's so sad." Then Waller made the audience laugh even more by doing a bit of his little boy routine, he said: "Ya know...I didn't want to do that song anyway...I just did it cause Wayne (audience member) asked for it." Waller eventually finished out the song and went directly into the next. 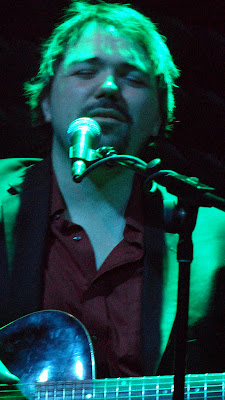 I had heard "Into The Dark Unknown," on Waller's MySpace page, once before seeing the show and immediately recognized it's chorus that sharply accents the end of every line. The version I heard online was also live but had other background vocalists in addition to Landsverk, who played an integral part in conveying Waller's songs. If I closed my eyes for the following song "Little Wrecking Ball," I would have sworn that Landsverk was playing banjo due to the finger picking he was doing on guitar. 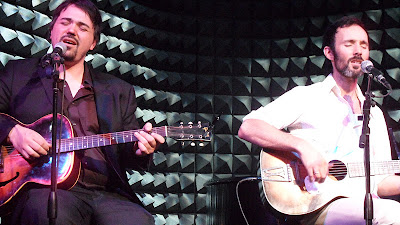 I was most impressed by the sometimes small musical nuances performed in Waller's songs with one example being "Atlas." Aside from Landsverk switching to violin, I thought it was brilliant that vocal harmonies only happened once in the song, when Atlas spoke. 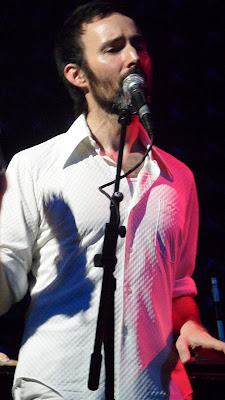 Waller moved to the piano for the next three songs seeming equally proficient as he is on guitar. After playing "The Unicorn" with it's rippling piano part, Waller did "Seven Eight Song" which was the first of my favorites in his set. Despite it's odd time signature, the song had a natural flow to it with Waller singing mostly in his lower register. There was something about the song that made me want to hear it done by an orchestra (with horns included.) 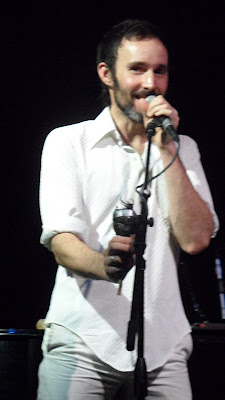 Before doing a new song, that he hasn't recorded yet, Waller talked a little about his new theater show. He then spoke a little about Occupy Wall Street. As a coincidence, the police removed the protesters from Zuccoti Park at 1:30AM the night before. Waller spoke about the same thing happening in Portland, where he resides, by stating "We got cleaned out last Friday...so it's kind of funny...exactly the same way too!" Waller then performed "Landside" which was another of my favorites. The song has a sing-song yet momentous chorus which Waller and Landsverk sang in falsetto. There's something about the song that reminds me of the band Bread (but not any song in particular - maybe it's just an overall 70's feeling). 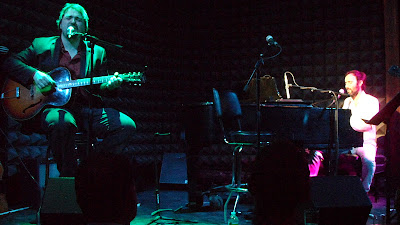 Waller went back to playing guitar and brought up singer/songwriter Nick Jaina to join in on piano. The trio played "Risk of Change," which I'd heard before and still sounded to me like a song that belonged in a film during those kind of montages that move the plot along. Jaina's piano playing sounded understated, more like he was sitting in rather than something they rehearsed.

I feel forced to mention that for the past few days since the show I have had "Risk of Change" on my brain. I find the song in my head when I wake up in the morning.  Even as I am writing this posting, sitting in Starbucks, "Risk Of Change" is  coming over the stereo system.  I can't help but wonder "Am I getting some sort of sign?" 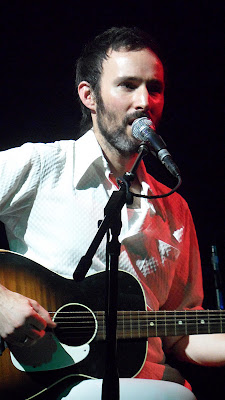 Next Waller put down his guitar to sing a song of Jaina's. According to his website, Nick Jaina is a musician and writer from Portland who has released several albums on the Hush Records label. He is currently working on a ballet and choral music project in New York City that involves dancers from the New York City Ballet. Jaina's song "James" had melody that felt like a hymn with a lilting chromatic part that came around twice. Waller read the lyric off of a music stand and delivered it beautifully. Seeing Waller perform sin guitar made "James" a nice change. 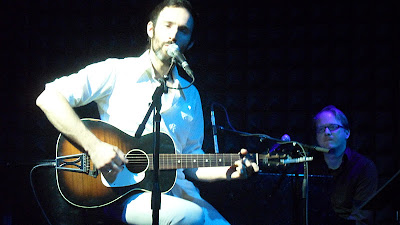 Waller unintentionally made me laugh before doing the song "Literally the End of the World." He was asking the sound person for more guitar in the monitor but when he wanted what I think was a little more bottom on his guitar, he said he wanted a little more "meat" to it. I guess I'm just a dirty old man who still sees a man's guitar as an extension of his manhood. (Okay - maybe you had to be there.) I digress - though I think Waller 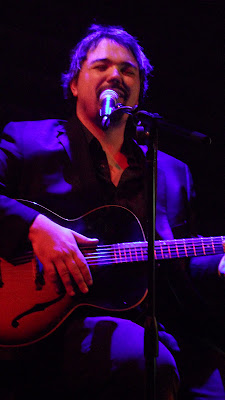 "Baby Blue" was the sweetest and the shortest song in his set. It actually felt like the last song even though there were two more songs to go before the encore. Waller did "Hardliners" in way that he said he had never done before which was just him on vocals and shakers with Ben Landsverk on piano. I really enjoyed the simple arrangement which I think is a testament to the songs interesting melody and chord changes. After the song Waller said " That's the version we will be doing at the Grammies....(in the year).. 2047 ..for my lifetime achievement award...they'll be saying - Ah, he never won anything or made any money..he's really old and cute...bring him out." Waller then momentarily imitated the walk of elder person. 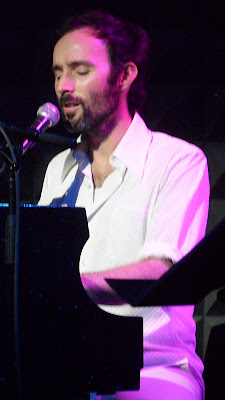 The last two songs were really wonderful for different reasons. The first "I Can Feel It," had an interesting piano part which had a piano trill at the end of the phrase. If I wasn't watching Landsverk playing the piano part, I might have thought it was an electronically sequenced loop. I thought both the piano part and Wallers vocal melody worked really well. 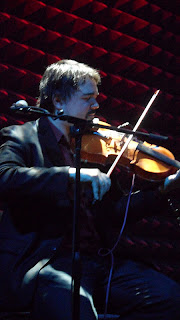 The second song was a cover originally by Buffy Saint Marie. As an aside, it was nice hearing Waller do the song after seeing Buffy Saint Marie for the first time at Joe's Pub in October of 2011. The cover is on Waller's recent release Into the Dark Unknown as well as being his newest video. The song has some native American tribal singing which Waller did really well. The funny thing is that sort of singing seemed to be incorporated in many of Wallers songs throughout most of Waller's set. By that I mean, that many of Waller's throw away intro adlibs or melismas for his songs had that modal kind of tribal quality of that last song. An example would be the vocal intro to the song prior. 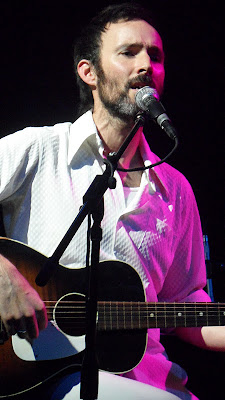 Holcombe Waller did "Down & Cried," for an encore, which he said he didn't perform often because it's hard for him to sing. But he figured that since he was loosing his voice he would just go for it. (Loosing his voice was about the way he felt - not what the audience was hearing.) 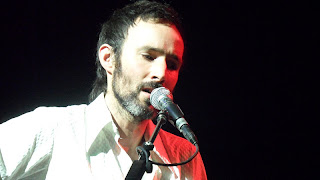 For a person who started out being on the fence, I can honestly say that I'm sold on Holcombe Waller and his music.  His warm stage presence and talent won me over on Tuesday night which is one of the many reasons I love going to concerts.

Email ThisBlogThis!Share to TwitterShare to FacebookShare to Pinterest
Labels: All Postings, Holcombe Waller