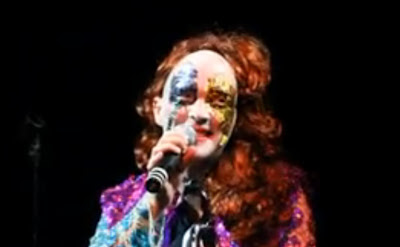 Comparison Is Violence or The Ziggy Stardust Meets Tiny Tim Songbook
In this posting I am going to try to avoid over used descriptions. In a world where many artists are considered avant-garde, it's more often than not a persona they later abandon. Then there is also the title of performance artist which has grown to mean nothing more than banging out the same provocative conceptual idea over and over again. Lastly there is the adjective androgynous. Androgyny stopped being something new when men grew their hair and woman burned their bras. After watching Taylor Mac's cabaret performance, I knew there is much more to him than those over used descriptions can provide.

Taylor Mac's outfit made Bowie's Ziggy Stardust costume look like a pair of pajamas. Mac's drag looked closer to 90's club kids than female impersonator; it seemed more about exaggeration than duplication. Mac's clothing was designed by Machine Dazzle who he acknowledged during the show. A fashionista would definitely have trouble describing Taylor Mac's outfit – maybe that's the point.  Mac's makeup was heavy on the glitter. From wig to toe, his outrageous outfit included fringes, sequins, and shiny glittery draped patterned fabric. 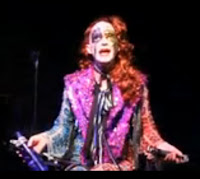 The first song of the evening was Bowie's "5 Years," which Taylor Mac changed to 2. Mac said if the Mayan calendar is right, he wanted to deal with his issues before Armageddon in the year 2012.  Taylor Mac alluded to thinking he would have to deal with his issues through eternity.  Mac then made it clear that comparison was his main issue. In his eyes, comparison is violence. Comparison is basically a passive aggressive way of saying “you're not as good as you think you are.”  Mac then explained that many people have compared him to a combination of Ziggy Stardust meets Tiny Tim. As Mac was doing this intro-monologue, his trio made up of piano, drums, and guitar were playing softly behind him. Mac then finished his medley by going into Tiny Tim's "Spaceship Song" before returning to "2 Years."

As with Taylor Mac's theater pieces, his cabaret show included many literary references. Mac utilized the same shtick as many drag and/or cabaret performers, by making reference to contemporary points of view and entertainment with one liners. But Mac also included references to Greek Tragedy, Shakespeare and The Bible.  Mac told the audience a story about how he was originally thinking of doing, his own theatrical interpretation of  The Bacchae.  But when he considered what a large undertaking his play, A Lily's Revenge had been, he opted to do a cabaret show instead.

Taylor Mac said his shows at Joe's Pub were his first cabaret. He poked fun at some of the conventions in cabaret such as finishing a song with a big note or delivering a ballad with sad desperation. He then went into the song “Stone Love,” which seemed more like Ethel Merman does Ziggy than Tiny Tim.   The voice Mac uses when he speaks on stage sounds Tiny Tim but Mac's singing voice is a lot bigger and a lot more musical theater.

The show got broken up (as in not all Bowie or Tim) when Mac explained that as a boy growing up in Southern California, he was often compared to Rick Schroder. (I wouldn't of minded the comparison – I was compared to Elliot Gould - Bab's first hubby).  Mac then did the song from the show Schroder starred in as a child. The show was Silver Spoons; the songs name was “Together.”

Taylor Mac said so many funny things that I can't possibly convey them all. (Good thing because this posting would then be considered a spoiler). Mac told a story about being fiercely rejected by a woman when applying for an audition. He said the woman rejected him so well that all he could think at that moment was “Work!” Mac also read emails, one particularly funny email was from his redneck uncle who's favorite pass times were drinking, driving and shooting.

What made the audience roar with laughter is when Taylor Mac picked up the Village Voice from the music stand in front him. The Voice carried a story about the Obie awards and featured Taylor Mac's face on the cover from his play A Lily's Revenge.

Before doing “Moonage Daydream,” Mac asked an audience member to come on stage. The volunteer was a young women who Mac kissed. After he kissed her, there was glitter on her face. Mac then said, “That's why I do drag, to leave my mark.” 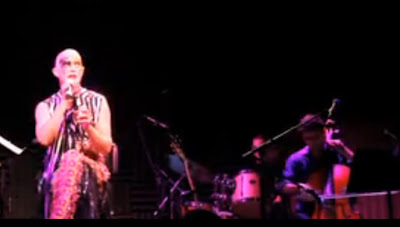 Mac's explicit gestures for most of Bowie's material made it seem like Mac was parodying the songs rather than just conveying the images. That changed when he performed “Starman” from Ziggy Stardust and Tiny Tim's “Tip Toe Through the Tulips.” The song “Starman” has always had a very melancholy feel in the melody. Taylor Mac's juxtaposing the song against “Tip Toe Through The Tulips” made that sad sweetness seem more pronounced. First off, guitarist Yair Evnine changed over to Cello. Secondly, both songs were done at a slightly slower tempo. The medley was the highlight of show.  I wrote Taylor Mac for some information and he told me that he almost scraped the "Starman/Tip Toe" arrangement with his trio because they didn't have much time to rehearse it.
When I've worked with bands there was always that last minute song that fell apart in rehearsal but magically came together in performance. Sometimes it's the most rehearsed songs that fall apart and the least rehearsed that really shine. It's one of those things that makes live performance really special.
Mac performed a song from A Lilly's Revenge, on ukulele.  Before doing the song, Mac gave a short synopsis of the play. Yet, it's still too long to write down in this post. Basically, it's about a lily who wants nothing more than to be loved but finds outs that love and equality are not the same.  I saw A Lilly's Revenge – It was a wonderful way to spend 5 hours but not easy to describe. While Mac was performing the song – the bartender was shaking a martini.  While still playing on his ukelele, Taylor Mac said “Make that Martini!” (Love that!)

When Mac got to the song “Lady Stardust,” Lady Rizo joined him on stage. I didn't know Lady Rizo before hand but I automatically liked her. There was something in her I-don't-take-shit-from-nobody attitude that read native New Yorker. Both Rizo and Mac had a little let's not fry, oh let's fry Lady Gaga fest. Part of the bit included calling Gaga “A Space Age Fame Robot – who you think of in tweets.” They finished together by singing a chorus of “Lady Stardust” and tagging it with a line from “Bad Romance.”
Taylor Mac gave props to those who inspired him directly like Justin Bond and indirectly like John Cameron Mitchell. (He apparently auditioned for Hedwig And The Angry Inch) right before singing “Hang On To Yourself.”  Pianist Matt Ray played the guitar parts on the piano and Yair Evnine stayed on Cello. If you know the original, it doesn't seem like the instrumentation for Mac's arrangement would work but it did.
Mac did some patter before his segue into a Tiny Tim song. When he stumbled onto the subject of whether David Bowie was ever gay or straight, he answered himself by saying “I don't know, I wasn't holding the candle!” He then contradicted himself by singing “I've Never Seen A Straight Banana.” He ended the entire bit by stating if you masturbate you have to be a little gay.
By “Suffragette City” Taylor Mac had his wig off and was pulling out his false eyelashes throughout the song. After the song, Mac was quoting Shakespeare's Sonnet 18. I wasn't sure why, but I think it was to show how comparisons can be used favorably. Mac went on to sing “Ziggy Stardust” with a dramatic flair (at least that's what I wrote in my notes.) When the waitress laid our bill on our table,  my friend Mark and I knew what was coming - “Rock-n-Roll Suicide.” You can't end a Ziggy Stardust show without it!!
Mac did 2 encores, the first was “Free” from David Bowie's Honky Dory. It's my favorite song from that album.  The second encore was the best way to end a really funny and wonderful show. He did Bowie's Hereos, solo on ukelele.
The Trio backing Taylor Mac was:
Matt Ray on piano
Yair Evnine on Cello and Guitar
Stefan Schatz on drums
Taylor Mac's Set List
5 Years (Performed as 2 Years) /Spaceship Song Medley
Stone Love
Together (Silver Spoons Theme)
Moonage Daydream
Starman/Tiptoe Through the Tulips Medley
A Flower Falls (The Lily's Revenge)
Lady Stardust (Performed with Lady Rizo)
Hang On To Yourself
I've Never Seen A Straight Banana
(Written by Ernest Hare in 1926) (Recorded by Tiny Tim in 1976)
Suffragette City
Lady Stardust
Rock N' Roll Suicide
Encore
Fill Your Heart
Heroes
Posted by Frank Grimaldi

Email ThisBlogThis!Share to TwitterShare to FacebookShare to Pinterest
Labels: All Postings, Taylor Mac