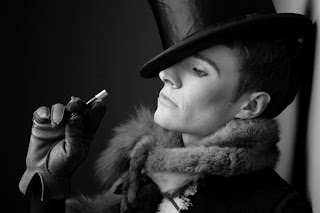 In a cabaret show titled Morphium, directed by Christian Coulson,  Kim Smith gave a dynamic vocal performance. His delivery of obscure songs and arrangements of somewhat contemporary material in the Wiemar style were spot on.  Smith's affected speaking voice mixed with his native Australian accent made it seem as if he were channeling a German man speaking the Queens English. His dramatic flare made me feel like I was in the opening scenes from the film (not the play) “Bent.” What was most intriguing was that Kim Smith sang many of his songs from a female perspective in male drag. He wore a tuxedo shirt and black pants.

The show opened up with Jerry Steichen on piano. As Steichen played, the shows opening prelude “Morphium,” cellist Saeunn Thorsteindottir leaned against the stage entrance with her left hand strategically placed against the wall. When it came time to play her part, Thorsteindottir walked a short distance to her cello and began to play. The intriguing prelude“Morphium” was very film noir which is not surprising. The writer was Misha Spivakovsky who did many Hollywood film scores after leaving Berlin in 1933.

Pianist Steichen later stopped by my table alluding to German dancer and prostitute, Anita Berber who performed her "Cocaine" dance to “Morphium” in one of her shows at the Weisse Maus cabaret in the 1920's Berlin. The story goes that some of Beber's performances of the “Morphium” dance showed a little too much skin. So much so, that the club patrons wore masks to protect their identity. Ironically, Berber died young from an alcohol and cocaine overdose. 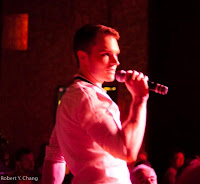 As if magically, Kim Smith appeared standing on the edge of the embankment that runs down the middle of Joe's Pub. The song he sang was “Nature Boy,” which I found to be a very bizarre choice. Smith had many powerful songs throughout his show. Starting from a position of power overlooking the audience and then singing a song which describes a demure yet wise young man was a bit incongruous.


For me, Kim Smith's show started with the next two songs. The first dramatically described a man who was so beautiful that everyone wanted him. The lyric included lines like “Women formed a choir around him.” Smith seamlessly segued into “You Keep Me Hangin' On.” I've heard the song stand-up to many arrangements, from the Supremes to The Vanilla Fudge. Smith used the song, moving from the objective to the personal, keeping it in the feel of the Weimar Era by doing it in 3/4 timing instead of 4/4. The song held up to Kim Smith's arrangement as well.

Before moving onto the next song, Smith spoke to the audience while remaining in character. He introduced the Steichen on piano, but when he introduced Thorsteindottir he humorously said “She's the muscle of the organization.” Smith kept the audience chuckling by telling us about Kim Wilde; the British pop star, who also performed “You Keep Me Hangin' On.,” in the 80's. (Her other big hit was “Kids In America"). He said Kim Wilde was her stage name; her real name was Kim Smith.  Mr.Smith found out the information regarding Wilde's real name when he googled himself to see if someone had made up a wikipedia page of him.

Smith set up the next song by saying he had to sell himself then moved into the audience putting his hands on men's shoulders as he sauntered around the room. What Smith did, did not read as if he were selling himself.  Selling one's self would be sitting on a man's lap, sipping his martini, ruffling his hair or holding his chin and looking into his eyes. (Note to Smith: See Ute Lemper the next time she performs.) I'm sure doing all I just described might have made a few men in the audience uncomfortable, but I felt what Smith did was play it too safe. From where I sit, if a performer is going to walk through the audience, he better interact with them. Otherwise, it comes off as pretentious.

After turning his back on the audience for affect, Smith moved into one of his signature songs “Black Max.” I watched a video on Youtube to see Smith sing the song again. It's not a very easy song to sing but Smith's performance of it was hand in glove. In fact, Kim Smith nails most of his material hands down.


The following three songs had to do with being incurably romantic and long lost love. When Smith got to the second song “Once Upon a Summertime,” I wrote in my notes – too studied. During the ballad, there was a moment when Smith kept his hands by his side. It was the one moment when I was actually feeling something during Kim Smith's performance. That moment came and went almost as quickly as a 15 second TV commercial.

Before doing the song medley “Drunken Sailor/Pirate Jenny,” Smith told someone in the audience “don't get drunk because we won't know what to do with you.” He then sang the song which asked what to do with a drunken sailor. Both songs in the medley were sang from a female perspective.  (Did he think any sailors would be in the audience due to the memorial day weekend?....hmm)

Smith ended his show with a group of 4 songs which he dubbed the “Optimistic Suite.” The suite started with “Optomistic Voices” and ended with “Over the Rainbow” in German. Both songs were from, of course,The Wizard of Oz. The suite was pretty good but didn't feel like the grand finale it was supposed to be.

I would like to say that Kim Smith came back for an encore but he never left the stage. It was very clear that the encore was written as a definite part of the show, not as a maybe. Smith did his other signature song, “Missed Me,” and then tagged the show with a song snippet as he walked off into the audience from whence he came. 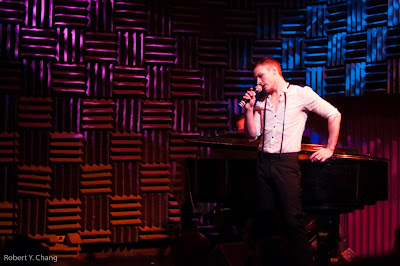 I think Kim Smith is extremely talented. What disappointed me about Smith's show is I don't feel like I really got to know Kim Smith through his character. Kim Smith's performance was at Joe's Pub in 21st Century New York City not 1920's Germany. I would have liked to have seen Kim Smith embody that German character while living inside Joe's Pub not inside an imaginary theater with a forth wall.

Special Thanks to Robert Y. Chang for all the color photos in this posting.
Posted by Frank Grimaldi

Email ThisBlogThis!Share to TwitterShare to FacebookShare to Pinterest
Labels: All Postings, Kim Smith