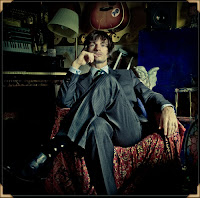 I have found on rare occasions that if I put something I want out into the universe it just might materialize. Thus when I wrote in an earlier BLOG entry about how I would like to see PT Walkley do a full set at the Joe's Pub, I had no idea the planning was already in the making.

PT did beyond what is usually classified as a full set at Joe's Pub (11-13 songs).  He did almost 20 songs. It was exciting to watch as PT Walkley raced through his set like a hyperactive little boy who had something he desperately wanted us to hear. So much so, that when PT ended his set, he didn't really make it clear to the audience that he was done. We weren't sure if he was coming back out and whether or not we should be asking for an extremely warranted encore. I think he saw from backstage that we all had that “huh” look on our faces because he and the band came out anyway for 2 more songs. He did “Why” which I was waiting for and a song that I remembered from the Weezer show “Overwhelming.”

Early in his set, PT Walkley did a lot of the material from his newest CD “Mr. Macy Wakes Alone.” The band walked out on stage as the music done by the Kings Highway String Quartet played over the sound system. The melody being played is one that opens up and closes the new CD as part of the last song “Somebody.” After the intro, PT sang “Lucky Ones” with his tall, lanky and lovely wife Michel by his side doing her talking parts – the song has a very 1920's ragtime feel to it and was a fun opener. He later returned to the same musical feel doing “Calvin in the Corner” and "Audrey Macy "as a sort of medley.

I have to say you can hear a lot of PT Walkley's influences in his music. But on Saturday night, as soon as I heard the harmonies in “Sunshine” one influence clicked – The Beatles. I'm not stating that because Sean Lennon worked on some of “Mr. Macy” but because I think The Beatles influence was already there. Not all the of PT's songs that remind me of The Beatles are Lennonesque – there is definitely a McCartney influence. Some of the a fore mentioned songs on “Mr. Macy Wakes Alone ” remind me of “Honey Pie,” and PT's song “Sanitarium” reminds me of songs like “For No One" and "Eleanor Rigby."

Since I've digressed to the point of talking about musical influences, I would like to make a comparison as well. PT Walkley has the the same sort non stop energy as Butch Walker. Both men seem to love what they do so much that they can stay on stage until they drop. (PT was sweating through the whole show until someone finally handed him a towel.) And oddly enough both songwriters went for a softer more country music sound on their newest CDs. Digression over – back to the show.

The show took off when PT went solo for two songs on his acoustic guitar. Before bringing the band back in, PT performed his song “Mediocre” with it's sarcastic twist and then played his infamous YouTube cover of Bruce Springsteen's “For You.”  PT seemed a bit worried about recapturing his online performance. After all, the song is quite wordy and not that easy to deliver. But after dropping a chord or two on acoustic guitar in the beginning of the song he delivered it with flying colors.

Following the acoustic portion, the band started to crawl back in with Drums and Piano, for the song “Lovely World ”   PT Walkley dedicated a new follow up song “Oh My Darling “ to all the kids in the house including his niece and nephew. By the time the PT got to the song “Radio” the entire band was on stage going for it. It was the second time I've heard him do “Radio” and the second time I thought this song is awesome. “Radio”, to my ears, sounds very Tom Verlaine but with more of a pop edge.  The energy from that point took the band through to the end of the show to PT's current signature song “Somebody.”

Walkley's band consisted of brothers Nicky and David Kulund on Drums and Bass. David was playing a Rickenbacker bass which has been one of my favorites since the 70's. My friend commented that David looked like Mike Nesmith because he wore a hat for the first part of the show (Ref. The Monkees). All of the bands powerful lead solo's were done by Lizzy Lee Vincent on electric guitar and Marc Trachtenberg gave PT's songs that player piano ragtime feel when appropriate.   Each musician including Michel Walkley, at one point or another, filled out the sound with background vocals.   On the very last song of the set "Punch Drunk," Oren Kaufner came on stage from the audience to play Harmonica.


By all accounts, PT Walkley is an artist who's going places. By doing some research I see he has put in quite a few important appearances like opening for Coldplay. I'm glad I'm getting to see him now because one day soon he's going to be a sold out headliner at a place like Webster Hall.   For me, that means paying extra bucks to scalpers on Craigslist.  Damn!